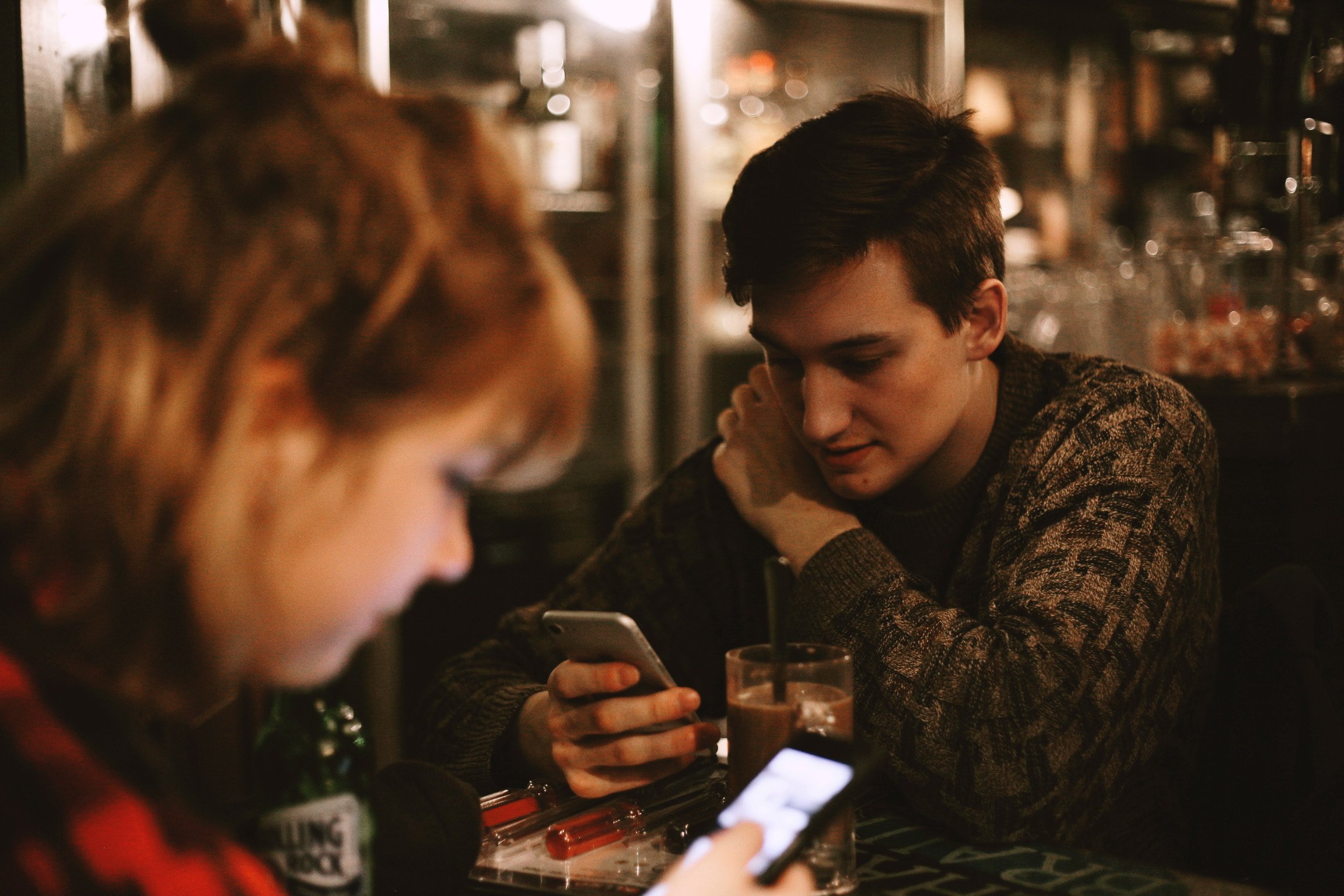 Photo by Jacob Ufkes on Unsplash

As a teacher who has long witnessed and worried about the impacts of technology in the classroom, I constantly struggle to devise effective classroom policies for smartphones. I used to make students sing or dance if their phones interrupted class, and although this led to some memorable moments, it also turned inappropriate tech use into a joke. Given the myriad deleterious effects of phones – addiction, decline of face-to-face socialisation, deskilling, and endless distraction, for starters – I want students to think carefully about their phone habits, rather than to mindlessly follow (or not follow) a rule.

After reading my Aeon essay on the topic, a representative from a San Francisco startup called YONDR contacted me. YONDR makes special pouches that keep audiences from using their phones at shows. You silence your phone, slide it into the pouch, and lock it at the top. After the performance, or if access is necessary before then, you can unlock the case in the lobby by touching the lock to a metal base, similar to anti-theft tags on clothing. Performers such as Dave Chappelle and Alicia Keys have used YONDR – whose motto is ‘Be here now’ – to curtail unsanctioned recordings and, when they look into the crowd, they see faces, not phones. The approach seems less draconian than forcing people to part with their tech, as separation anxiety defeats the goal of increased engagement.

YONDR sent me pouches to use in class. At the start of the winter semester, I introduced my students to the routine: before each class, they’d silence their phones, get a pouch from the box, and lock their phones in. Before leaving, they’d unlock the case and put it back in the box. During class, I didn’t care if they put the pouches on the desk, in their pockets, or if they clutched them tight. I told them this was an experiment for an eventual article, and that I wanted their honest opinions, which I’d collect via surveys at the beginning and end of the semester.

Initially, 37 percent of my 30 students – undergraduates at Boston University – were angry or annoyed about this experiment. While my previous policy leveraged public humiliation, it didn’t dictate what they did with their phones in class. For some, putting their phones into cases seemed akin to caging a pet, a clear denial of freedom. Yet by the end of the semester, only 14 percent felt negatively about the pouches; 11 percent were ‘pleasantly surprised’; 7 percent were ‘relieved’; and 21 percent felt ‘fine’ about them.

Workarounds emerged immediately. Students slid their phones into the pouches without locking them, but because they still couldn’t use their phones in class, this became a quiet act of rebellion, rather than a demonstration of defiance. Some of them used their computers, on which we often search databases and complete in-class exercises, to text or access social media. I’m not comfortable policing students’ computer screens – if they really want to use class time to access what YONDR denies them, that’s their choice. The pouches did stop students from going to the bathroom to use their phones. In previous semesters, some students would leave the room for 10 to 15 minutes and take their phones with them. With phones pouched, there were very few bathroom trips.

A quarter (26 percent) of my students predicted that YONDR would make the classroom ‘more distraction-free’. At the end of the semester, twice as many (51.85 percent) said it actually had. I can’t tell if this is a grudging admission, as though conceding that broccoli isn’t so bad after all, or an earnest one. Once, after class, I noticed a pouch left under a desk. A few minutes later a student raced in. ‘I totally forgot about my phone after I put it in the pouch,’ she said. ‘I guess that means they’re working.’ Perhaps she daydreamed about something else or produced a magnificent doodle, but chances are she was actually engaged in the class.

When I asked whether society would benefit from decreased phone use, only 15 per cent said no. Two-thirds (65 percent) said yes, and 19 percent said: ‘I think so.’ Half (50 percent) of students mentioned better communication and more face-to-face interactions as benefits of using phones less. ‘I started to notice how my cellphone was taking over my life,’ one student wrote. ‘[B]eing in the shower is a time I really appreciate because it forces me to spend some time away from my phone, just thinking rather than mindlessly scrolling.’

My goal with this experiment was to get students thinking about their habits, rather than to necessarily change them. Students should question authority, including mine. It’s easy for me, and, I suspect, much of the older generation, to seek evidence to support the idea that life was better before smartphones. My students admit they can’t read maps, that they find reading and writing on paper antiquated, that they don’t memorise information they can google. Yet these are not confessions – these are realities. Some changes are simply changes. Not everything needs to be a value judgment, but students generally agree that phone use in the classroom is inappropriate – only 11 percent believe a class phone policy is unnecessary.

At the beginning of the semester, 48 percent said that a more distraction-free environment would help with learning. Given that, I asked why we still surround ourselves with phones in the classroom. A fifth (20 percent) used the word ‘addiction’ in their responses – a word they often avoid. Many mentioned boredom. Unfortunately, societal norms suggest that phone use is an acceptable response to boredom. But as philosophers such as Søren Kierkegaard and Bertrand Russell have argued, boredom is essential – it ignites imagination and ambition. Boredom isn’t something from which students need rescuing.

One student voiced a reductionist explanation: ‘We are idiots. We cannot control our behaviour.’ While I appreciate the pithy observation, the resoluteness of these statements troubles me. If we write ourselves off as idiots, then why bother examining the way we live? If we have no control over our behaviour, what’s the point of trying to change?

Technology is part of humanity’s narrative. That’s neither inherently good nor bad – the implications are up to us. While 39 percent of my students said that studying the effects of phone use didn’t change their thoughts or behaviours, 28.5 percent try to use their phones less and 21.5 percent now try to be more aware about how/when they use their phones. Half of my students think more critically about the role of phones, and that’s the first step in guiding our relationship with technology, instead of letting tech guide us.

Still, I wanted some sense of where my students’ generation will take this story. I asked them whether they’d ever implant their phones in their bodies (as predicted by industry leaders at the Davos World Economic Forum in 2016) and here’s what they said:

Two-thirds of my students would at least consider making their phones part of their bodies, which would mean accepting all the consequences of screens, instant gratification and information-dependency. But as with all hypothetical questions, perhaps when the possibility arises, some will decide to preserve the ability to put down their phones. Perhaps they’ll remember that time with the kind of nostalgia I feel for the experiences of childhood that no longer exist.

In the novel Ishmael (1992) by Daniel Quinn, the ape Ishmael tells its human pupil that it’s an expert in captivity.

‘I have this impression of being a captive,’ the pupil says, ‘but I can’t explain why.’

‘[You’re] unable to find the bars of the cage,’ Ishmael replies.

I keep returning to this idea when I think about the YONDR experiment. Ishmael is talking about the destruction of the environment, but his observation applies to human use of technology too. Participation in modern-day civilisation requires technology, particularly smartphones. We pay bills, communicate with friends and family, get our news, and apply for jobs, college and healthcare via websites and apps. The old-fashioned way doesn’t work anymore. We have to adapt.

But it’s up to us exactly how to adapt. Do we line up to fork out more than $999 for the new iPhone? Do we text someone across the room or keep our phone on the table during dinner? Do we opt to interact with other humans as little as possible and rely on technology as the go-between?

Ultimately, that’s what the YONDR pouches represent: choice. Perhaps agency won’t lead to a different narrative, but it could offer my students a workaround. If they are going to implant smartphones in their bodies, I hope they do so not because it’s the path of least resistance but because they thought about it and truly want it. And if they power down their phones, I hope it’s not (always) because a professor asked them to.

Joelle Renstrom is a writer whose work has appeared in Slate, The Guardian, and the Daily Beast. She teaches writing and research at Boston University, and blogs about the relationship between science and science fiction at Could This Happen?