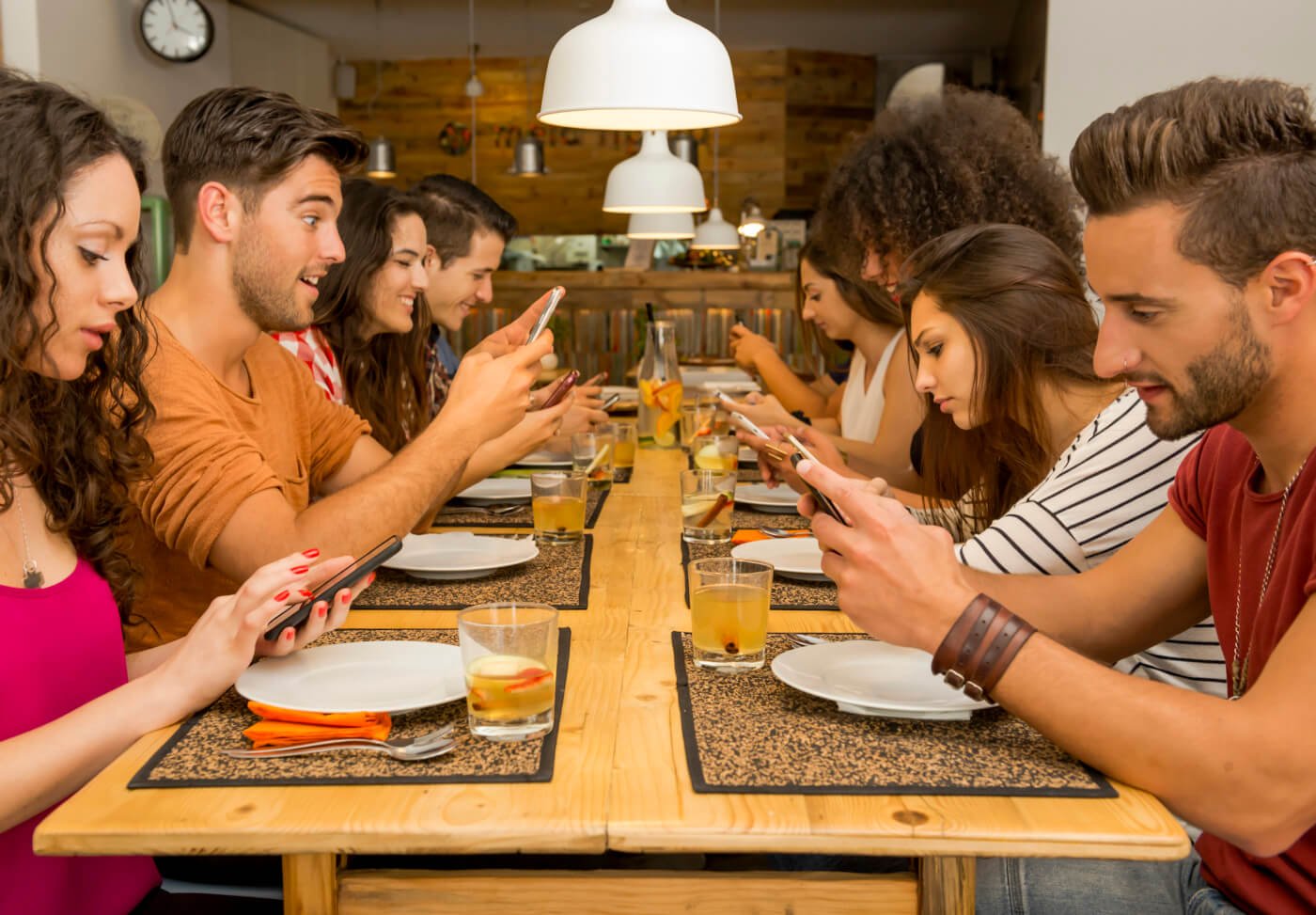 I go to this boot camp-style class sometimes at a gym near my apartment. It’s one of those classes where a coach stands there and yells at you to do more pushups and squats until you think you’re going to puke. Then you go home and struggle to sit on a toilet for the next three days.

Today, as happens many mornings, a couple of people, in between exercises, ran over to the wall to pick up their phones and check … well, I don’t know what the fuck they could have been checking. Email? Instagram? Snapchatting their sweat beads so everyone could see? I don’t know.

The point is they were on their phones.

And the coach got pissed, yelled at them to put their fucking phones away, and we all stood around awkwardly.

This proceeded to happen two or three times in the class, as it does in pretty much every class, and for whatever reason, today I decided to speak my mind to the woman glued to her phone while the rest of us were working out:

“Is there really nothing in your life that can’t wait 30 minutes? Or are you curing cancer or something?”

Note to readers: this is a bad way to make friends.

I was pissed. But fuck them. I felt like I was in the right, that I was saying what pretty much everyone else in the room was silently thinking.1

Later that day, once we’d all gone home, while painfully sitting on a toilet seat, I was going over the incident in my head. And I asked myself, “Why does that bother me so much? Why do phones, in general, seem to bug me so much? Why does it bother me when my wife pulls out her phone when we’re walking down the street together? Why do I fervently hate with a passion people who hold up their phones and record half a concert? What’s the deal?”

Am I the screwed up one here?

If you think about it, our attention is the only thing we truly own in our lives. Our possessions can go away. Our bodies can be compromised. Our relationships can fall apart. Even our memories and intellectual capacity fade away.

But the simple ability to choose what to focus on — that will always be ours.

Unfortunately, with today’s technology, our attention is being pulled in more directions than ever before, which makes this optioning of our own attention more difficult — and more important — than ever before.

In his book Deep Work, Cal Newport argues that the ability to focus deeply on a single project, idea or task for long periods of time is not only one of the most important skills for succeeding in the information age, but it’s also an ability that appears to be dwindling among the population.

But I would go even further. I would say that our ability to focus and hone our attention on what we need is a core component of living a happy, healthy life. We’ve all had those days or weeks (or months or years) where we’ve felt scatterbrained — out of control of our own reality, constantly sucked down rabbit holes of pointless information and drama comprised of endless clicks and notifications.

And I think this is why the cell phone thing at the gym pissed me off. Those workouts are fucking hard. They require me to focus and exert not only physical discipline but mental discipline as well. And to stop every 10 minutes because somebody needs to email their boss or text their boyfriend yanks me out of that. And worse, it yanks me out against my will.

It’s attention pollution when somebody else’s inability to focus or control themselves then interferes with the attention and focus of those around them.

And with the explosion in smart devices and internet available pretty much everywhere from Timbuktu to your mother’s ass crack, attention pollution is infiltrating our daily lives more and more without us realizing it.

Their inability to focus interferes with our (already-fragile) ability to focus. The same way second-hand smoke harms the lungs of people around the smoker, smartphones harm the attention and focus of people around the smartphone user. It hijacks our senses. It forces us to pause our conversations and redouble our thoughts unnecessarily. It causes us to lose our train of thought and forget that important point we were constructing in our head. It erodes at our ability to connect and simply be present with one another, destroying intimacy in the process. 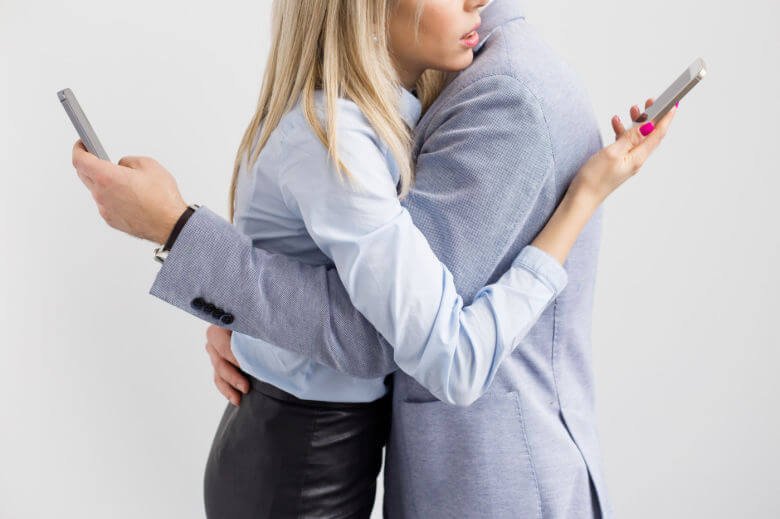 But the smoking comparison doesn’t end there. There’s evidence that suggests that we are doing long-term harm to our memories and attention spans.4 The same way smoking cigarettes fucks over our long-term health in the name of a series of short-term bursts of highs, the dopamine kicks we get from our phones are harming our brain’s ability to function over the long-term, all in the name of getting a bunch of likes on that really cool new photo of our food we just took.

Now, it may sound like I’m overreacting here. Like I had a shitty gym session and am taking it out on hundreds of thousands of readers on the internet.

But I’m serious. I think this is fucking us up more than we realize.

I’ve noticed that as the years go on, it’s becoming harder for me to sit down and write an article like this than it was three or four years ago. And it’s not just that the amount of available distractions have compounded over the years, it’s that my ability to resist those distractions seems to have worn down to the point where I often don’t feel in control of my own attention anymore.

And I’m pretty sure that I’m not the only one.

I’ve met people the last few years who get incredibly anxious if they can’t check their phone in social situations. They carry their phones into conversations the way some people carry dogs on airplanes. It’s a constant outlet if the necessity to interface with another person’s thoughts and feelings ever becomes too intense.

I’ve started to notice people who feel like they need to always be checking email or their messages to feel as though they’re being a good, productive employee. Doesn’t matter if it’s their kid’s violin recital, or in the car at stop lights, or in bed at midnight on a Saturday. They feel like they have to always be caught up on every piece of information that is flung their way, otherwise they’re somehow failing.

I’ve noticed friends who can no longer sit through entire movies (or even episodes of a TV show) without pulling out their phones multiple times in the middle of it. People who can’t make it through a meal without putting the phone next to their plate.

It’s happening everywhere, and it’s therefore becoming the social norm. The eroded attention is becoming the normal, socially acceptable attention, and we are all paying for it.

I have a dream, friends. I have a dream of a world where people can sit through long, dull conversations, without feeling the need to douse themselves with instant-gratification delivered through glowing plastic screens.

I have a dream of a world where people are cognizant of not only their own limited attention, but the precious attention of others and some numb-nuts won’t start texting in the movie theatre, totally killing the mood of a dramatic scene.

I have a dream where our devices will be comfortably allotted as the occasional supplement to our lives, and not used as a poor replacement for them. Where people will recognize that the constant and instantaneous delivery of information has subtle costs associated with it, as well as its more obvious benefits.

I have a dream where that respect for attention would extend to the world around them, to their friends and family and the acknowledgment that the inability to focus is not only harmful to oneself, but harmful to one’s relationships and ability to hold and maintain intimacy with someone.

I have a dream that these women won’t check their fucking phones when I’m doing burpee #327 next Wednesday. For God’s sake, if you’re going to the gym, go to the fucking gym.

And when this happens, and when we allow freedom to ring, when we let it ring from every village and every hamlet, from every state and every city, we will be able to speed up that day when all of God’s children, black men and white men, Jews and Gentiles, Protestants and Catholics, will be able to join hands and sing in the words of the old Negro spiritual: “Free at last! Free at last! Thank God almighty, we’re free at last (from our smartphones)!” 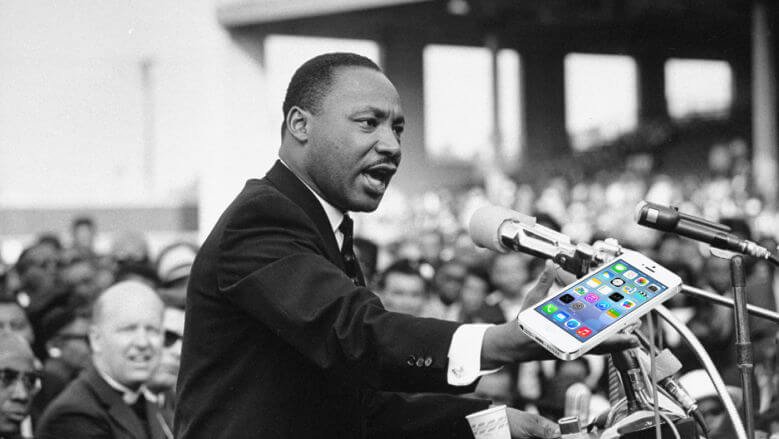 OK, maybe I plagiarized that last paragraph, but next time you're taking a selfie at dinner, ask yourself, what would Dr. King have wanted?