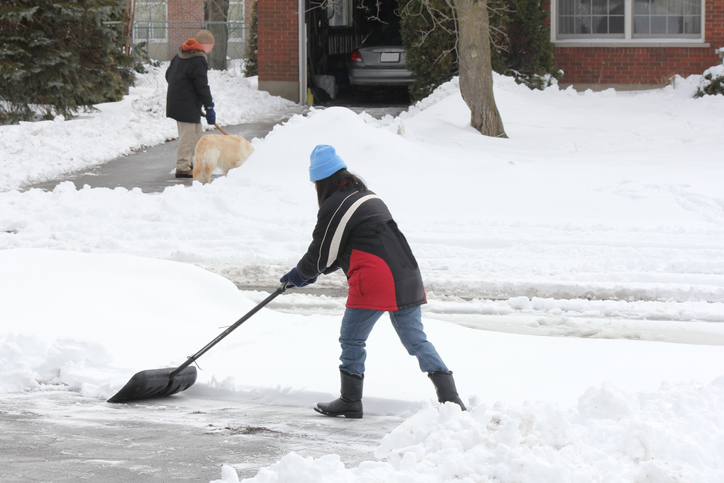 Will you have help digging out after a snowstorm or are you the one offering help? Photo by huggy1/Getty Images

At any given moment in winter months, there could be a ferocious snow storm blowing through the northeastern United States. When a storm hits, some places might have at least 8 inches on the ground and the drifts piled up two feet high. The plows would be out and working on clearing the roads but most people likely stay safely ensconced at home. The snow stops eventually—hopefully before people run out of bread and milk and eggs—and then people will emerge from their homes and begin the process of clearing the snow from their sidewalks and homes. Are there local social “rules” that assist with snow removal?

Local ordinances aside, snow removal is necessary if you want to leave your home—and help others leave their homes—unless you plan to wait for spring. People may employ shovels or snowblowers and it seems to be common courtesy to help out neighbors in need. The elderly, for example, for whom shoveling could present a health issue, or if you know your neighbors are on an odd shift, or if there is a pregnant mom or parent of young children. These are cases where neighbors might be moved to help each other. But there isn’t a hard and fast rule to this. If you don’t have a relationship with your neighbors or if there are conflicts with your neighbors, regardless of their situation, you may not be moved to help.

Snowblower owners are in a particularly tough spot. The machine makes relatively easy work of what can be a very labor intensive process. If someone who owns a snowblower sees someone else struggling with a shovel by no means are they obligated to help, but it could hurt the sense of community within the neighborhood if they don't. Where do snowblower owners stop, then? How many houses is enough? Do they need to clear driveways AND sidewalks? How do they avoid falling into the pattern of being the savior for their block all the time?

One person I spoke with said he started waiting until he hears the shovels stop. Rather than being the first one out or joining the ranks of shovelers, he attends to the task later in the day, which absolves him of having to clear everyone’s sidewalks and driveways. It’s come to that because his neighbors expect him to help, and frankly, he’s tired. Others report making it more of a community affair. They may borrow the machine once the owner is done and do their own home, passing it along the street in this way (and chipping in for gas to make sure it’s available next time). The issue with this, however, is that it’s not a community machine, and when it breaks or needs to be replaced, the costs fall to the original owner. Others have gone the route of having a neighborhood owned machine, but this kind of arrangement requires strong community ties. And of course there are people who enjoy being “that” person—the one who does the whole block, and then offers to drive over and help out friends in need.

Voluntary actions that contribute to the well-being of others is not unique to human beings. Known as prosocial behavior, helping, sharing, donating, and cooperating have been found in many social species, including insects, birds, bats, cetaceans, small mammals, and primates. Humans may be unique in the magnitude of help offered because we display a tendency to routinely help others even at great cost to self. This is a nuanced decision. While we may not consciously recognize it, we’re likely to help those who can return the favor even if it’s not in kind. Our social relationships are built on social debt. Healthy relationships require us to discharge that debt (by helping someone in need) while accepting debt (allowing others to help us).

The one thing people seem to agree on—offline and online—is that if you’re relying on a neighbor to help clean your snowy paths, at minimum say thanks.

Krystal D'Costa is an anthropologist working in digital media in New York City. You can follow AiP on Facebook.