This Is What Life Without Retirement Savings Looks Like

Many seniors are stuck with lives of never-ending work—a fate that could befall millions in the coming decades. 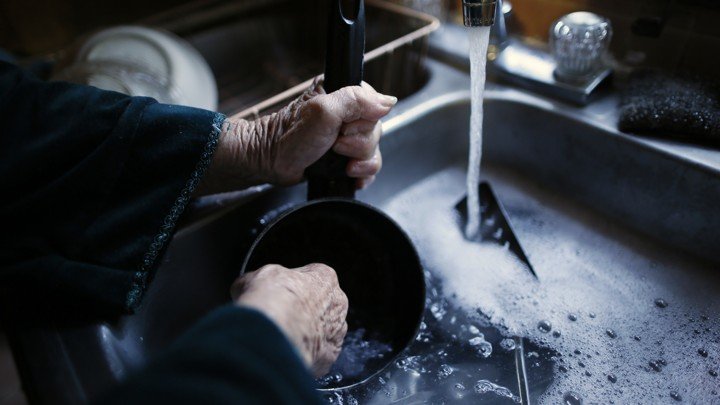 A woman washes dishes in her trailer in Santa Monica, California. Photo by Lucy Nicholson / Reuters.

CORONA, Calif.—Roberta Gordon never thought she’d still be alive at age 76. She definitely didn’t think she’d still be working. But every Saturday, she goes down to the local grocery store and hands out samples, earning $50 a day, because she needs the money.

“I’m a working woman again,” she told me, in the common room of the senior apartment complex where she now lives, here in California’s Inland Empire. Gordon has worked dozens of odd jobs throughout her life—as a house cleaner, a home health aide, a telemarketer, a librarian, a fundraiser—but at many times in her life, she didn’t have a steady job that paid into Social Security. She didn’t receive a pension. And she definitely wasn’t making enough to put aside money for retirement.

So now, at 76, she earns $915 a month through Social Security and through Supplemental Security Income, or SSI, a program for low-income seniors. Her rent, which she has had to cover solo since her roommate died, is $1,040 a month. She’s been taking on credit-card debt to cover the gap, and to pay for utilities, food, and other essentials. She often goes to a church food bank for supplies.

More and more older people are finding themselves in a similar situation as Baby Boomers reach retirement age without enough savings and as housing costs and medical expenses rise; for instance, a woman in her 80s is paying on average $8,400 in out-of-pocket medical expenses each year, even if she’s covered by Medicare. Many people reaching retirement age don’t have the pensions that lots of workers in previous generations did, and often have not put enough money into their 401(k)s to live off of; the median savings in a 401(k) plan for people between the ages of 55 and 64 is currently just $15,000, according to the National Institute on Retirement Security, a nonprofit. Other workers did not have access to a retirement plan through their employer.

That means that as people reach their mid-60s, they either have to dramatically curtail their spending or keep working to survive. “This will be the first time that we have a lot of people who find themselves downwardly mobile as they grow older,” Diane Oakley, the executive director of the National Institute on Retirement Security, told me. “They’re going to go from being near poor to poor.”

The problem is growing as more Baby Boomers reach retirement age—as of early 2018, between 8,000 to 10,000 Americans turn 65 every day, according to Kevin Prindiville, the executive director of Justice in Aging, a nonprofit that addresses senior poverty. Older Americans were the only demographic for whom poverty rates increased in a statistically significant way between 2015 and 2016, according to Census Bureau data. While poverty fell among people 18 and under and people 18 to 64 between 2015 and 2016, it rose to 14.5 percent for people over 65, according to the Census Bureau’s Supplemental Poverty Measure, which is considered a more accurate measure of poverty because it takes into account health-care costs and other big expenses. “In the early decades of our work, we were serving communities that had been poor when they were younger,” Prindiville told me. “Increasingly, we’re seeing folks who are becoming poor for the first time in old age.”

This presents a worrying preview of what could befall millions of workers who will retire in the coming decades. If today’s seniors are struggling with retirement savings, what will become of the people of working age today, many of whom hold unsteady jobs and have patchwork incomes that leave little room for retirement savings? The current wave of senior poverty could just be the beginning. Two-thirds of Americans don’t contribute any money to a 401(k) or other retirement account, according to Census Bureau researchers. And this could have larger implications for the economy. If today’s middle-class households curtail their spending when they retire, the whole economy could suffer.

The retirement-savings system in the United States has three pillars: Social Security, employer-sponsored pensions or retirement-savings plans, and individual savings. But with the rise of less stable jobs and the decline of pensions, a larger share of older Americans are relying only on Social Security, without either of the two other pillars to contribute to their finances. This by definition means they have less money than they did when they were working: Social Security replaces only about 40 percent of an average wage earner’s income when they retire, while financial advisors say that retirees need at least 70 percent of their pre-retirement earnings to live comfortably.

Today’s seniors are so reliant on Social Security in part because companies that once provided pensions began, in the 1970s, to turn the responsibility of retirement saving over to individuals. Rather than “defined benefit” plans, in which people are guaranteed a certain amount of money every year in retirement, they receive “defined contribution” plans, which means the employer sets aside a certain amount of money per year. This switch saved companies money because it asked employees, not employers, to take on the risks associated with long-term investing. This means that the amount people receive is more affected by the ups and downs of the stock market, their individual wages, and interest rates. In 1979, 28 percent of private-sector workers had participated in defined-benefit retirement plans—by 2014, just 2 percent did, according to the Employee Benefit Research Institute, a nonprofit. By contrast, 7 percent of private-sector workers participated in defined-contribution plans in 1979—by 2014, 34 percent did.

The recession and economic trends in the years since have also worsened the finances of millions of seniors. Some bought homes during the housing boom and then found they owed more on their homes than they were worth, and had to walk away. Others invested in the stock market and saw their investments shrink dramatically. Jackie Matthews, now 76, lost her investments during the recession, and then had to sell her Arizona home in a short sale, netting only $3,000. She now lives near her family in Southern California, renting a room in a friend’s apartment, and budgets her finances carefully, skimping on meat and never buying anything new.

But even people who emerged from the recession relatively unscathed may have a hard time saving, according to a 2017 report from Government Accountability Office. Average wages, when adjusted for inflation, have remained near where they were in the 1970s, which makes it hard for workers to increase their savings. This has had a significant impact on the bottom 80 percent of workers, for whom average wages have remained relatively constant, even as income increased for the top 20 percent of households in the past three decades. 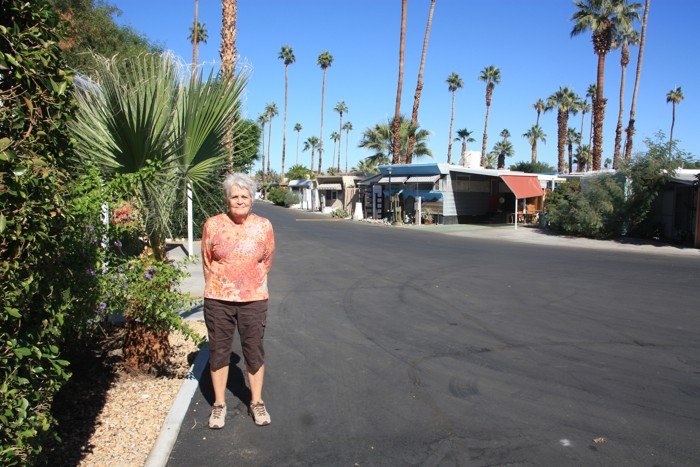 Deborah Belleau, age 67, at the mobile-home park where she works in Palm Springs. Photo by Alana Semuels / The Atlantic.

For many seniors, the answer to this lack of savings has meant working longer and longer, as Roberta Gordon is doing. In 2018, about 12.4 percent of the population aged 65 or older is still in the workforce, up from 3 percent in 2000, according to Oakley. I met a woman named Deborah Belleau who is 67 and works as a manager at a mobile-home park in Palm Springs, California. She worked as a waitress for 30 years, and often relied on government assistance as she raised her two children as a single mother. “You just don’t think about tomorrow” when you’re more worried about getting food on the table, she said. That means that today, though she receives money through Social Security, she can’t afford a cellphone or a TV. Her rent is $600 a month. She works full-time at the mobile-home park, despite aches and pains in her back and feet. Sometimes, when she wakes up, she can’t walk. But, she says, “I can’t quit. There’s no way I can live on $778 a month,” the amount she receives from Social Security.

These troubles can be particularly hard on women. That’s in part because they typically receive lower benefits than men do. In 2014, older women received on average $4,500 less annually in Social Security benefits than men did. They received lower wages when they worked, which leads to smaller monthly checks from Social Security. They also are more likely to take time off from work to care for children or aging parents, which translates to less time contributing to Social Security and thus lower monthly benefit amounts.

At least Belleau and others are physically able to work. Some seniors without retirement savings or a safety net have become homeless in recent years as housing costs have risen and they find themselves without the ability to generate income. “I see more homeless seniors than I’ve ever seen before” Rose Mayes, the executive director of the nonprofit Fair Housing Council of Riverside County, just east of Los Angeles, told me. In America in 2016, nearly half of all single homeless adults were aged 50 and older, compared to 11 percent in 1990.

What can be done to help today’s seniors and generations to come? There are two approaches, Prindiville says: help people save for old age and make retirement more affordable. As for the first approach, some states have been trying to establish programs that help people save for retirement through payroll deductions even if their employers don’t offer any retirement-savings accounts, for example. But the Trump administration in May 2017 repealed an Obama-era rule from the Department of Labor that would have made it easier for states to help people to set up these plans. And the federal government is winding down a program, called myRA, that tried to encourage middle- and low-income Americans to save for retirement. “There are no new initiatives or strategies coming out of the federal government at a time when the need is growing,” Prindiville said.

The second approach might mean expanding affordable housing options, creating programs to help seniors cover medical costs, and reforming the Supplemental Security Income program so that poor seniors can receive more benefits.But there does not seem to be much of an appetite for such ideas in Washington right now. In fact, the Trump administration has proposed cutting money from SSI as well as the Social Security Disability Income program.

These initiatives can make the difference between having a home—and some semblance of stability—and not. Roberta Gordon, in Corona, was barely scraping by when I talked to her. A few months later, she was much more stable. Why? She’d gotten off a wait list and been accepted into the housing-voucher program known as Section 8, which reduces the amount of income she has to put towards housing. She’s still working at 76, but she feels a little more secure now that she has more help. She knows, at least, that she’s one of the lucky ones—able, in her older years, to keep food on the table and a roof over her head.

Alana Semuels is a staff writer at The Atlantic.