Why Most of America Is Terrible at Making Biscuits

There’s a scientific reason no one outside the South can nail them. 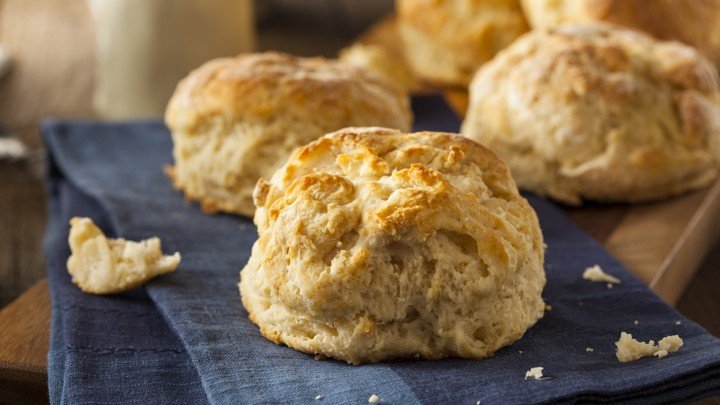 See? Biscuits are supposed to be tall. Photo by Brent Hofacker / Shutterstock.

For 25 years in Georgia, I watched my mom make the same batch of six light, fluffy biscuits for breakfast almost every Sunday. Then I moved to New York, never to see a light, fluffy biscuit again. I arrived in the city in 2011, just in time for southern food to get trendy outside its region, and for three years, I bit into a series of artisanal hockey pucks, all advertised on menus as authentic southern buttermilk biscuits.

With every dense, dry, flat, scone-adjacent clump of carbohydrates, I became more distressed. I didn’t even realize biscuits could be bad, given how abundant good ones were in the South. Even my mom, a reluctant-at-best cook, made them every week without batting an eyelash. The recipe she used had been on my dad’s side of the family for at least three generations.

The more bad biscuits I ordered in New York, the clearer it became that there was only one way out of this problem if I ever wanted to have a decent Sunday breakfast again: I had to make the biscuits for myself. I did not anticipate the hurdles of chemistry and the American food-distribution system that stood in my way.

I asked my mom to email me the recipe, and it was three ingredients (self-rising flour, shortening, and buttermilk), mashed together with a fork. I’m not an accomplished baker, but I cook frequently, and this was the kind of recipe that had long been used by people without a lot of money, advanced kitchen tools, or fancy ingredients. Confident that I could pull it off, I marched right out and bought the ingredients. The result: biscuits that were just as terrible as all the other ones in New York. Not to be dramatic, but my failure destabilized my identity a little bit. What kind of southerner can’t make biscuits?

In subsequent attempts, I tried everything I could think of to get it right. I worried about buttermilk quality, so I bought an expensive bottle at the farmers’ market, which did nothing. I tried different fat sources, including butter and lard, which made small differences in flavor and texture but still resulted in a shape and density better suited for a hockey rink than a plate. I made sure all of my ingredients were ice-cold when I started mixing, which is a good tip in general, but did not fix my problem. I kneaded the dough more or less, made it wetter or drier. The only thing left was the flour, but I figured it couldn’t be that—wasn’t self-rising flour the same everywhere? We had just used regular grocery-store flour back home.

Out of ideas, I did what any self-respecting Millennial would do: I Googled it, and then I called my mom, and then I placed an Amazon order.

The one ingredient I took for granted had indeed been the key all along, says Robert Dixon Phillips, a retired professor of food science at the University of Georgia. To make a good biscuit, “you want a flour made from a soft wheat,” he says. “It has less gluten protein and the gluten is weaker, which allows the chemical leavening—the baking powder—to generate carbon dioxide and make it rise up in the oven.” It turns out that in most of the U.S., commonly available flours are made from hard wheats, which serve a different purpose. “Hard wheats are higher in gluten protein, and when they’re turned into a dough, the dough is very strong and elastic and can trap carbon dioxide,” says Phillips. If you want to make bread, you want a hard wheat. Northern biscuits suck because they are made with bread flour.

At first, this information felt like a huge relief. I just had to buy the right flour. I’m great at buying things! Unfortunately, the problem was a little more complicated. According to Sarah Simmons, a chef from South Carolina who has owned food businesses in both New York and the South, finding soft wheat flour north of Washington, D.C., is tricky even for pros. “Northerners don’t have it. I couldn’t get it commercially, even,” she told me. “We had to make our own flour blend, and I spent probably nine months working on it, trying to get the right amount of protein.”

The crux of this problem is a brand called White Lily, whose name and logo is familiar to virtually all southerners but foreign to most people outside the region. White Lily was founded in Knoxville, Tennessee, in 1883, and although other contemporary brands now make serviceable biscuit flour, it still dominates grocery baking aisles across the Southeast. Biscuits are now as common an inexpensive staple bread in southern diets as bagels or kaiser rolls are in New York, but for generations of rural, working-class southerners, they were a luxurious treat. “When my grandmother in western North Carolina said bread, she meant cornbread,” Phillips told me. “The biscuits were a special thing. We’d have them on Sundays.”

Because of that, White Lily became an indicator of culinary success and the gold standard of southern kitchens, and its place in both the grocery market and southern culture has endured for more than a century. In 2007, the brand was bought by J. M. Smucker, and the prospect of moving White Lily’s flour production out of the South caused such a panic among southern cooks that The New York Times covered it in depth. For knowledgeable bakers and regional expatriates outside the South, though, that move presented a flicker of hope: If a national brand owned the company, maybe its products would finally get national distribution.

Ten years later, that hope has not come to fruition. J.M. Smucker did not return a request for comment, but the product-finder on the White Lily website turned up no retailers north of Richmond, Virginia. The only bright spot out West is a single Walmart in Oklahoma. Dallas and Houston both lack any vendors. If you’re on the West Coast, forget it. Displaced southern bakers have been known to stuff a bag in their suitcases when visiting home. You can order the flour for delivery on Amazon, but it’ll cost you anywhere from $10 to $15 for a bag, many times the in-store retail price of around $2.50. And you better plan ahead, because in the week before Thanksgiving this year, all the self-rising options had already sold out.

In modern food distribution, seasonality and origin are often lost entirely from the foods Americans buy. If it’s cold where you live and you want a banana anyway, there’s nothing stopping you from having one. In that context, soft wheat flour’s stubborn regionality is almost charming. According to Phillips, biscuits likely developed as a southern staple food specifically because the flour necessary to make them was (and still is) made from the kind of wheat that’s farmed there.

Most of North America’s hard wheat is grown on the plains, from Kansas north to Canada, but because of climate differences, the South has always had the softer kind, and cooks in the late 1800s didn’t have food-service giants like Sysco trucking in mass-produced flour from thousands of miles away. As a result, biscuits are uniquely southern, and they seem determined to stay that way. Unless you’re at my Thanksgiving, of course. I’ve got a couple bags of the good stuff squirreled away in the fridge.