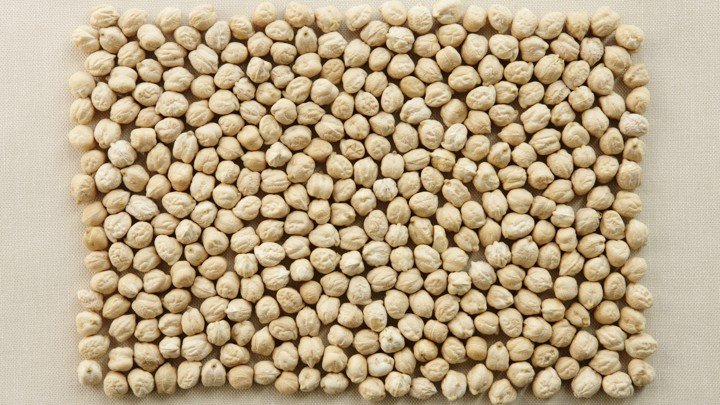 In 2007, Poorvi Patodia was pregnant and felt like she was eating too many chips. Her cravings for salty, crunchy snacks were intense, but what moms should eat while pregnant is a touchy subject. “I had this thought of, What else could I be eating that’s better for me?” she says. “I remembered these roasted chickpeas that my mom used to make.”

Patodia started roasting chickpeas for herself. She had her baby and went on with her life, but the thought stuck with her. Her fellow Americans were missing out on something delicious.

Five years later, Patodia put her pregnancy cravings, Indian background, and professional experience in the food industry together and started Biena Snacks, which offers more than a dozen varieties of crunchy, flavored chickpeas. It was the right thing at the right time, even in a country that has long ignored the ingredient: The snacks are now available in more than 12,000 retail locations.

Biena is part of a constellation of American food companies, including Banza and The Good Bean, that has sprung up around the humble chickpea in recent years, ready to fully integrate a global staple food into the country’s diets. Now there are chips made with chickpea flour and vegan butter emulsified with the liquid waste of hummus manufacturing. There’s dessert hummus, which might be one of the more difficult sells in the garbanzo-food family tree. Beyond the grocery store, there are viral chickpea recipes to prepare at home, and maybe even some chickpea brine behind the bar at your favorite cocktail spot. (The substance, commonly called aquafaba, can be used to create a fizz without the threat of salmonella borne by a raw egg white.)

Trendy ingredients with health-centric pitches can be easy to dismiss as the domain of affluent coast dwellers overestimating the importance of their own preferences. But the spike in chickpea interest in the United States has been so profound that it’s even reflected in internet-search data: Monthly Google inquiries have more than tripled since January 2011, when hummus was already commonplace among the country’s more adventurous eaters. In a country increasingly wary of meat, more open than ever to non-Western ingredients, and anxious about climate change, the chickpea’s expanding role in the American diet is less a trend story than a logical inevitability.

First, there was hummus, the Trojan horse on which the chickpea rode into the American diet. “Hummus was one of the first prestige grocery foods,” says Ali Bouzari, a food scientist and culinary consultant who helps companies develop new food products. “Hummus was The Sopranos of the grocery store.” Because of new manufacturing and packaging technologies that had become available around the time of hummus’s 2000s-era ascent, Bouzari says, food companies were able to deliver a fresher, better-tasting product to consumers than the first time snack brands had tried their hand at bean dips—which is essentially what hummus is—in the 1970s.

Hummus’s American expansion was led by the Israeli company Sabra, which was so successful that PepsiCo bought a 50 percent ownership stake in it in 2008. But the involvement of giant food conglomerates is an indication of hummus’s success, not the cause of it, Bouzari says. “They could not just cram it down our throats if we weren’t going to buy it,” he explains.

The era’s growing stable of health-conscious consumers wanted something to dip their carrots in besides fat-free ranch dressing. Hummus provided a snack that wasn’t predicated on engineering the good parts out of something they liked, and it benefited from an American populace more open-minded about new foods than it ever had been. It appeared in grocery stores at a time when Americans had already started acclimating en masse to things such as sushi, which had been considered intolerably foreign by most Americans for decades. Comparatively, hummus was a small leap.

“It boils down to the fact that people like creamy, starchy stuff,” Bouzari says. “And at this point, the American learning curve for new foods is just insanely short.” He attributes that shift to the internet and travel creating a sense of broad familiarity to more types of food, but also to some fundamental differences in who gets to make decisions in the American food industry. People like him and Patodia, who grew up with immigrant parents and had food experiences that deviated from the long-held white American norm, have more power to shape what ends up in grocery stores, as both consumers and industry professionals.

Once hummus became a widely enjoyed grocery-store staple, people at every level of the American food industry saw opportunity in the legume’s versatility. In the Middle East, South Asia, Africa, and the Mediterranean, chickpeas have been a common ingredient in everyday cooking for thousands of years. “The reason chickpea is grown and consumed so heavily in those areas is because of its nutritional value,” says Douglas Cook, the head of the chickpea lab at the University of California at Davis. “It’s an import species, and we’re a bit late to the party.”

One of the chickpea’s biggest sells to modern American consumers is its protein and fiber content. Like Greek yogurt, another familiar but foreign food that took off at roughly the same time, the chickpea’s high protein—15 grams a cup when cooked—is seen as evidence of its superior food value in a diet culture obsessed with protein. Indeed, Patodia says that one of Biena’s two biggest consumer demographics isn’t characterized by a particular location or income level, but by a common goal. “They’re struggling or aspiring to eat healthier but have a hard time with it,” she says. “It’s the original problem I was trying to solve for myself.”

For those with food allergies or dietary restrictions, meanwhile, chickpeas are a utility player. They tend to trigger fewer reactions than wheat or soy while furnishing a similar stable of flours, extracts, and nonanimal protein sources. Plus, twice as many Americans believe they have food allergies as actually do, so an ingredient’s status as allergy-friendly can propel it to popularity beyond just those with diagnosable problems. Bouzari sees this as a big motivator for his clients that are developing new products. “Chickpea is one of the five or 10 ingredients that, universally, everyone is okay with putting in their stuff,” he says.

For vegetarians, vegans, or omnivores who want to eat less meat, the bean is handy and transmutable. “It’s available across cuisines, so it’s a pretty easy thing to adapt to people’s diets,” says Alicia Kennedy, a vegan food writer and the host of the Meatless podcast. “It takes on so many flavors on its own, so it’s kind of the chicken of the bean world.” Chickpeas are common in Indian, Turkish, Ethiopian, Middle Eastern, Greek, Italian, and Spanish food, just to name a few, so they’re an easy starting point for American cooks. “Chickpeas just aren’t an intimidating bean,” Kennedy says.

The number of Americans who eschew meat or animal products altogether has held roughly steady in recent decades, but the amount of meat eaten by Americans overall has declined: From 2005 to 2014, red-meat consumption in America dropped by almost one-fifth. The concerns about health and the environment that drove that drop have only intensified in the five years since. Chickpeas are inexpensive and broadly available, and the global cuisines they commonly appear in are ones that de-emphasize meat in ways that Americans are starting to see as more valuable. People in the United States aren’t trying anything new. Instead, they’re regressing to the global mean after generations of profligate meat consumption that many now consider unwise.

In the maybe-not-so-distant future, getting closer to that mean might be more necessity than choice. In a climate that’s getting hotter and drier for many Americans, sustainable and nutritionally dense crops such as chickpeas will likely play an important role in feeding people, as exactly what America can cultivate changes. Chickpeas haven’t dominated global diets for millennia by coincidence, according to UC Davis’s Cook. “Chickpea is very efficient in terms of water use, and in most of the world, it’s grown as a rain-fed crop,” he says. It also enriches the ground it grows in: Chickpeas, like other legumes, release nitrogen into the soil. Cook says that reduces the need for one of the most expensive and environmentally damaging elements of industrial food cultivation: fertilizer made by burning fossil fuels.

Its particular combination of cultural and nutritional circumstances makes the chickpea’s expanding popularity a different phenomenon than Millennial trends that might be dismissively associated with it, such as avocado toast or gluten avoidance. It’s less of a fad, and more of a new norm in what people expect from the food they buy. “People up and down the whole chain, whether it’s people going to the stores or buyers for the stores or product developers, there’s momentum,” Bouzari says. Americans at large are just ready to eat a little differently, he explains. “If someone tried to launch hummus in the American market in March 2019, it would be a phenomenon by September, and you’d be writing about it right when football season started.”