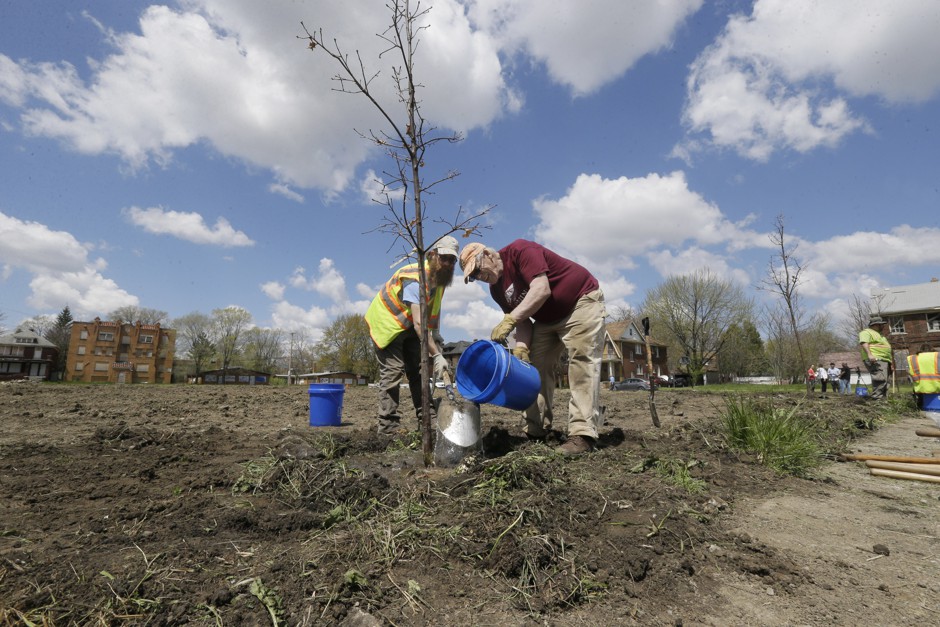 John Kost, left, and Barry Johnson, citizen foresters for the nonprofit group The Greening of Detroit, plant a tree in the Osborn neighborhood in Detroit in 2016. Photo by Carlos Osorio/AP .

A landmark report conducted by University of Michigan environmental sociologist Dorceta Taylor in 2014 warned of the “arrogance” of white environmentalists when they introduce green initiatives to black and brown communities. One black  environmental professional Taylor interviewed for the report, Elliot Payne, described experiences where green groups “presumed to know what’s best” for communities of color without including them in the decision-making and planning processes.

“I think a lot of the times it stems from the approach of oh we just go out and offer tree plantings or engaging in an outdoor activity, and if we just reach out to them they will come,” Payne told Taylor.

In fact, this is exactly what was happening in Detroit at the time that Taylor’s report came out. In 2014, the city was a few years deep into a campaign to reforest its streets after decades of neglecting to maintain its depleted tree canopy. A local environmental nonprofit called The Greening of Detroit was the city’s official partner for carrying out that reforesting task, which it had started doing on its own when it was founded in 1989. By 2014, TGD had received additional funding to ramp up its tree-planting services to the tune of 1,000 to 5,000 new trees per year. To meet that goal, it had to penetrate neighborhoods somewhat more aggressively than it had in the past and win more buy-in from the residents.

The tree-planters met stiff resistance: Roughly a quarter of the 7,500 residents they approached declined offers to have new trees planted in front of their homes. It was a high enough volume of rejections for such an otherwise valuable service that University of Vermont researcher Christine E. Carmichael wanted to know the reasons behind it.

She obtained data that TGD collected on the people who turned them down, and then visited Detroit to interview staff members and residents. What she found is that the rejections had more to do with how the tree-planters presented themselves and residents’ distrust of city government than it did with how residents felt about trees. Carmichael’s findings (with co-author Maureen H. McDonough) were published in 2019 in the journal Society and Natural Resources.

The residents Carmichael surveyed understood the benefits of having trees in urban environments—they provide shade and cooling, absorb air pollution, especially from traffic, increase property values, and improve health outcomes. But the reasons Detroit folks were submitting “no tree requests” were rooted in how they have historically interpreted their lived experiences in the city, or what Carmichael calls “heritage narratives.”

These are the stories that people from all walks of Detroit life tell themselves and each other about why city conditions are the way they are. The heritage narratives that residents shared about trees in Detroit were different from the ones shared among the people in city government and TGD.

A couple of African-American women Carmichael talked to linked the tree-planting program to a painful racist moment in Detroit’s history, right after the 1967 race rebellion, when the city suddenly began cutting down elm trees in bulk in their neighborhoods. The city did this, as the women understood it, so that law enforcement and intelligence agents could better surveil their neighborhoods from helicopters and other high places after the urban uprising.

The city was chopping down trees at a faster clip at this time. And  the city was flying helicopters over their homes at one point—to spray toxic DDT from above on the trees. However, the government’s stated reason for the mass tree-choppings was that the trees were dying off from the Dutch elm disease then spreading across the country. These were competing heritage narratives of the same event—the clearing away of trees in the 1960s. The two narratives are in conflict, but it was the women’s version, based on their lived experiences, that led to their decision to reject the trees today. It’s not that they didn’t trust the trees; they didn’t trust the city.

“In this case, the women felt that [after the race rebellion] the city just came in and cut down their trees, and now they want to just come in planting trees,” said Carmichael. “But they felt they should have a choice in this since they’ll be the ones caring for the trees and raking up the leaves when the planters leave. They felt that the decisions regarding whether to cut down trees or plant new ones were being made by someone else, and they were going to have to deal with the consequences.” 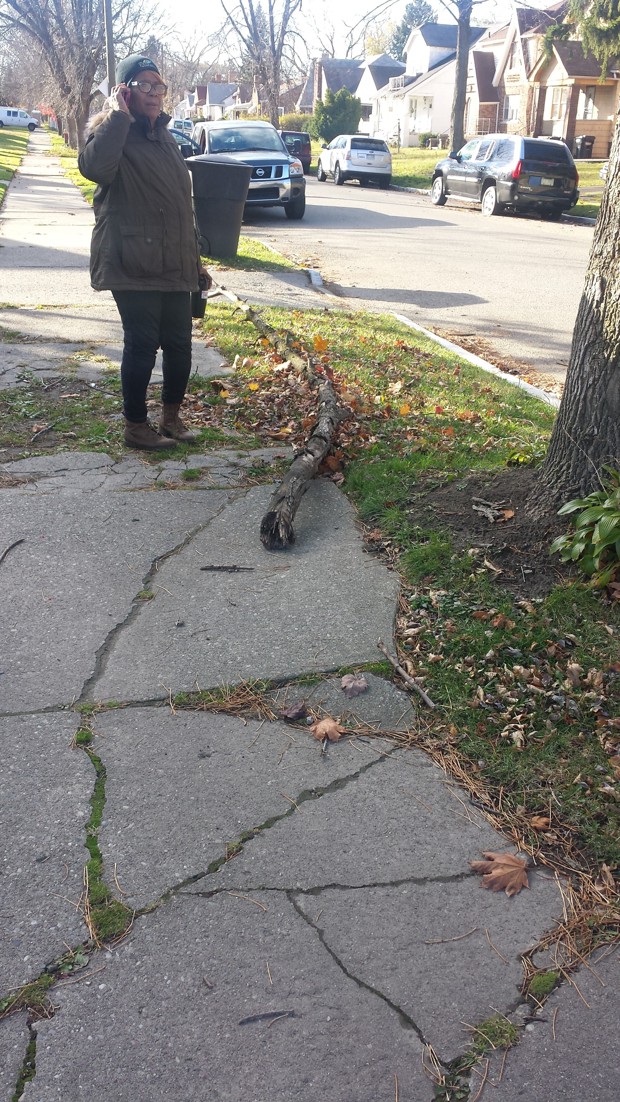 “This shows sidewalk damage and a large limb that has fallen from a street tree planted, likely by the city, many years ago,” said study author Christine Carmichael. “Residents who were resistant to tree planting also often noted that they felt existing, large trees on city property were not adequately cared for and affected the appearance of the neighborhood, and presented a safety concern.” Photo by Christine E. Carmichael .

There was distrust not only of the city, but of the tree planters as well, particularly considering how TGD staff stepped to the people in the communities they were plotting on. The Greening of Detroit had 50,000 volunteers (during that 2011-2014 time period), most of them white and not from Detroit. The organization had just one community-outreach person on staff. And that outreach apparently did not include involving neighborhood residents in the planning of this urban-forestry program.

“City residents could request a tree planting in their neighborhood from TGD, but TGD’s green infrastructure staff decided in which neighborhoods to plant trees, as well as tree species to plant and tree maintenance protocols,” reads the paper. “TGD’s green infrastructure staff members committed to maintaining trees for three years after planting, which residents were informed of through door hangers and at community meetings, if they attended such meetings.”

Failing to meaningfully involve the residents in the decision-making is a classic environmental-justice no-no. However, from reading excerpts of Carmichael’s interviews with TGD staff members, it’s clear some of the tree planters thought they were doing these communities an environmental-justice solid. After all, who would turn down a free tree on their property, given all of the health and economic benefits that service affords? Perhaps these people just don’t get it. As one staff member told Carmichael in the study:

You’re dealing with a generation that has not been used to having trees, the people who remember the elms are getting older and older. Now we’ve got generations of people that have grown up without trees on their street, they don’t even know what they’re missing.

In 2014, Detroit had an African-American population of 83 percent, and the highest rate of concentrated poverty among the top 25 metros in the U.S., according to the Brookings Institution. This forestry project was ramping up right as the city was in the throes of bankruptcy. These residents may have had different priorities in mind than those carried by the tree-planters who came knocking. Race and class matters in urban greening agendas, as the City of Houston once learned when it failed to survey non-white, lower-income residents for the creation of its parks master plan in 2014.

One Detroit resident whom Carmichael interviewed for her study told her: “You know what, I really appreciate you today because that shows that someone is listening and someone is trying to find out what’s really going on in our thoughts, the way we feel, and I just appreciate you guys. And maybe next time they can do a survey and ask us, if they would like to have us have the trees.”

Monica Tabares, TGD’s vice president of operations and development, said the organization always had a community-engagement process, but other factors complicated their interactions with residents, such as the city’s poor record of tree maintenance.

“Our capacity to fulfill every community partner’s needs was in hindsight a bit more difficult to achieve, and that resulted in some impressions among some individuals about not feeling the inclusion,” said Tabares. “Also, the city itself didn’t have the capacity to bring down dead trees, nor to prune trees, plus the fact that we were now replanting trees in some really decimated areas with no tree canopy. It left people questioning whether they were going to be taken care of. It just didn’t jibe right with all of our resident partners.”

Since talking with Carmichael and learning her study’s findings, Tabares says TGD has made several changes to its program, adding more material involvement of residents in the tree-planting and planning process. The organization now also has four community-engagement members on staff, all of whom live in the city of Detroit, which Tabares said has encouraged more trust from the residents.

“Having people come in and not be from the city and then dictate what goes on—not that we ever did that—but that’s the feeling. So we want people to feel comfortable with our engagement team that’s talking about the benefits of trees,” said Tabares.

The lessons learned from the study are immediately important, given that environmental organizations often partner with cities for these kinds of services. This is especially true when local governments don’t have the funding to do it (as happened in Detroit) or when the federal government shuts down ( what’s happening now). Having diverse staffs that reflect the city’s neighborhoods and understand the heritage narratives that run through them matter.

“Heritage narratives are important because they guide actions that are taken,” said Carmichael. “A nonprofit might say tree-canopy decline can be used to justify their approach to educating residents, because there are people who don’t understand the value of trees. But everyone I interviewed understood those benefits, so it’s inaccurate to say that. Ultimately, the feeling was that they were being disenfranchised.”