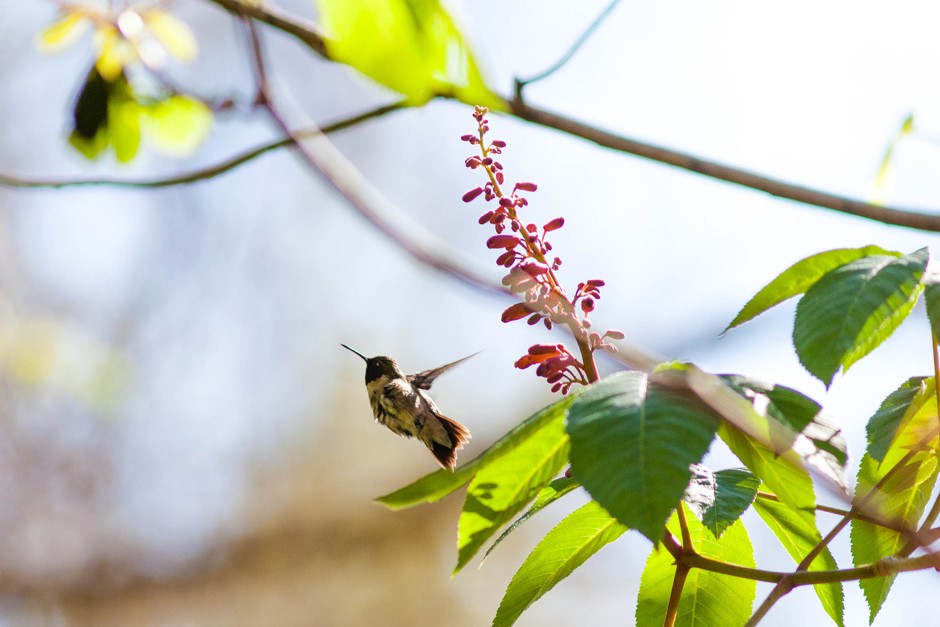 A ruby-throated hummingbird takes flight at the Old Forest in Overton Park in Memphis. Photo by Melissa McMasters/Overton Park Conservatory.

After the Interstate Highway System was authorized in 1956, planners decided that I-40 would link Tennessee’s big cities, from Knoxville to Nashville to Memphis. But in Memphis, locals looked at the proposed route of the highway and were appalled. It would barrel through Overton Park, a beloved local green space dotted with ponds, paths, and a stand of old-growth forest.

A grassroots group banded together to protest, but construction of the highway continued, getting ever closer to the park’s border. As a last-ditch effort, the group filed an emergency motion with the U.S. Supreme Court. Improbably, it won. I-40 was rerouted, and the ruling recognized that “protection of parkland” had to be considered in infrastructure planning.

The old-growth forest in Overton Park is an ecosystem of more than 140 acres that dates back at least 10,000 years. Where they survive, older forests have unique benefits. They’re great carbon sinks, pulling carbon dioxide from the atmosphere and sequestering it in their woody tissues for centuries. (Whether they sequester as much as new-growth forests is a matter of scientific debate, and the rate does vary by climate.) Their concentrated longevity is good for biodiversity. Old-growth forests have trees of a wide range of ages, forming a dense arboreal community for moss, lichens, insects, and small mammals. 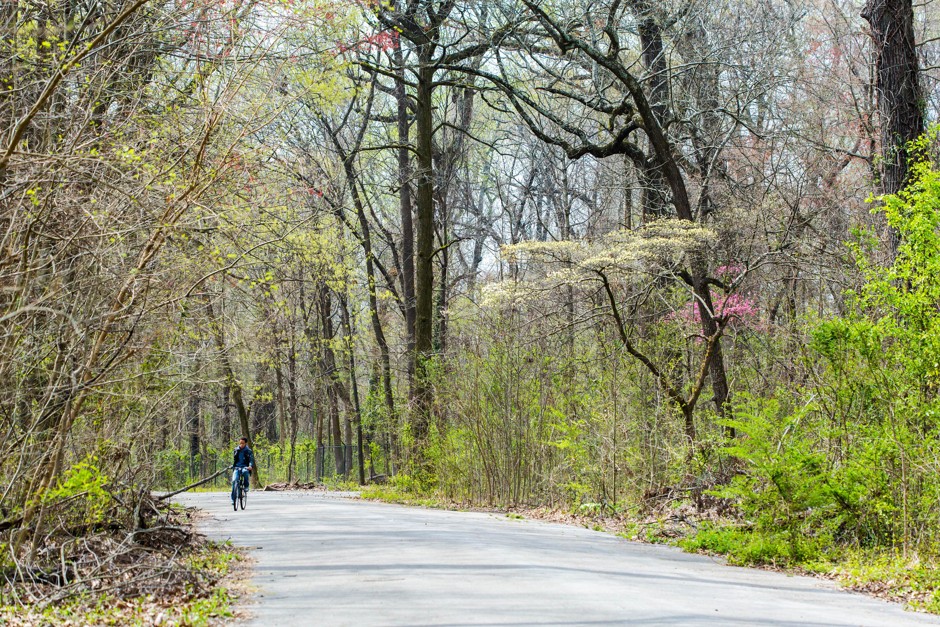 “Our forest is a refuge for species in the urban area, and an important stop on the Mississippi flyway for migratory birds,” said Eric Bridges, director of operations at the Overton Park Conservancy. “It’s also a place where you can look into the past and see how our environment looked before it was cleared for human development.”

The term “old-growth” is loosely defined. It generally refers to forests that have been untouched for at least a century and are functioning ecosystems, with trees of various ages, dead material on their forest floors, and limited disturbance by humans. According to the Pacific Northwest Research Station of the U.S. Forest Service, the term originated with early foresters, and only in the 1970s did scientists start to use it.

Some experts consider regional definitions to be most accurate. Temperate-zone forests, which have long fire-rotation periods, are distinct from mixed-wood forests that might progress into conifer-heavy woods without those fiery cycles. Sequoia National Park, where the General Sherman giant sequoia has presided for an estimated 2,300 to 2,700 years, is very different from the remnants of the longleaf pinelands of the Southeast, in which regular wildfires are part of an ancient cycle of regeneration.

Although second-growth forests, established after tree harvesting, can become old-growth by age, they often don’t have the same stability. The National Park Service notes that in the second-growth areas of the Redwood National and State Parks, selective thinning is necessary to encourage redwood density, and the lack of old stumps, nurse logs (fallen trees), and snags (standing dead trees) means that there are fewer habitats for forest fauna.

It’s hard to estimate how much old-growth forest remains in the United States. Back in 1991, as reported by Scientific American, both the U.S. Forest Service and the nonprofit Wilderness Society created old-growth inventories of the Pacific Northwest and Northern California, and they came up with different numbers. The Forest Service estimated 4.3 million acres; the Wilderness Society just 2 million.

Meanwhile, old-growth forest survives in unexpected ways—and places. The Methuselah Grove of the Ancient Bristlecone Pine Forest in California has trees nearly 5,000 years old that evaded the country’s rapid deforestation at 11,000 feet above sea level. In Manhattan, stands of old-growth hickory and oak have managed to endure in Inwood Park, a short walk from busy New York City streets.

As a relatively young country, the United States has only recently transformed some of these forests into urban areas. In cities, the demand for land to develop and for recreation makes their protection complicated. 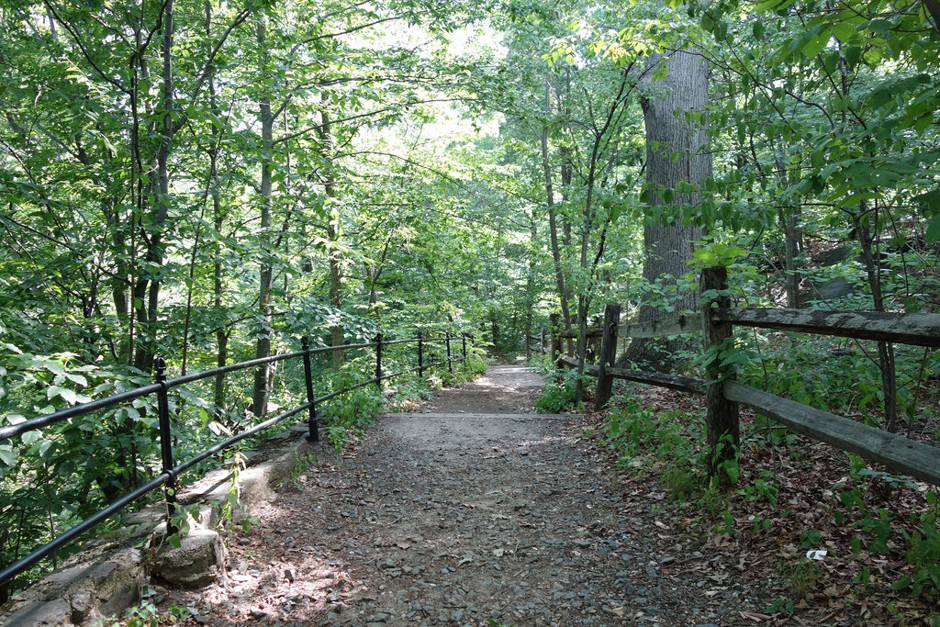 The Thain Family Forest at the New York Botanical Garden in the Bronx. Photo by Allison C. Meier.

Particularly in the middle of a city, old-growth forests are rare, but there are urban examples scattered around the country, including Glencarlyn Park in Arlington, Virginia; Fairmount Park in Philadelphia; and the Oak Woodlands in San Francisco’s Golden Gate Park. Their survival can be precarious. The centuries-old woods at Crown Hill Cemetery in Indianapolis were protected in 2017 following a lawsuit that stopped a planned cremation monument.

“When developers or governments are looking for the next place to put a project, whether that is a new highway, a new school, a new stadium, or a new sports park, they get out the maps and look for the ‘blank’ spaces,” said Joan Maloof, executive director of the Old-Growth Forest Network, a Maryland-based conservation group. “And guess where the forests are?”

Maloof emphasized that “so many organisms, from snails to ground beetles to fungi to wildflowers, depend on these last bits of their habitat that remain.” Certain slow-growing lichens rely on these forests’ longevity, like Lobaria oregana, a flaky lichen mostly found in old-growth forests on Douglas firs.

Birds return to the same forests throughout their lives, and removing woodlands can cause birds to be displaced. A 2017 paper by researchers at Oregon State University showed that two species of birds negatively affected by rising temperatures from climate change—the hermit warbler and Wilson’s warbler—were stable or increasing in count when in areas with old-growth forest.

The Old Forest of Overton Park was permanently protected as a state natural area only in 2011. Even with this status, there are conservation challenges when an old-growth forest is surrounded on all sides by the built environment. Invasive species can take a short trip from homes and garden centers. English ivy and kudzu vines creep in.

“We can’t use the full breadth of management strategies, because something like prescribed burning is politically untenable in a dense urban area,” said Bridges of the Overton Park Conservancy. Yet there’s some evidence that older forests may be more resistant to invasive species than newer ones. One article in the New York Times on New York City’s forests noted that, although a survey found that 56 percent of these areas had invasive species, younger forests had the smallest population of native species in their understory layers.

Old-growth forests need human guardians, although there are downsides to them being popular with the local community. The old oak and hickory trees that visitors adore in Overton Park require active stewardship—otherwise the forest might naturally transition to smaller trees such as maples, elms, and hophornbeams as the old trees die and fall. The park has a pedestrian trail, but runners who frequent the area have made their own trampled paths, possibly disturbing the ecosystem.

Coexistence can be tricky. Atlanta’s Fernbank Museum of Natural History was founded in 1939 to preserve the Fernbank Forest, one of the largest remnants of the Piedmont-region forest. The 65-acre forest hosts more than 200 species of native plants, upwards of 150 native animal species, and numerous fungi, mosses, and microbes. In 2012, after a 48-year lease to DeKalb County, the museum took over its management.

Lynn Anders, the museum’s director of outdoor programs, explained that before they could offer people access to the forest, they had to get it into better health. In 2012, it was “overrun with non-native invasive species and a blanket of biological pollution that prevented it from thriving.”

The real health test is in the topsoil. Just an inch or two can take hundreds of years to form as dead material is broken down. If Fernbank Forest was going to invite people in, it needed to protect that delicate layer. 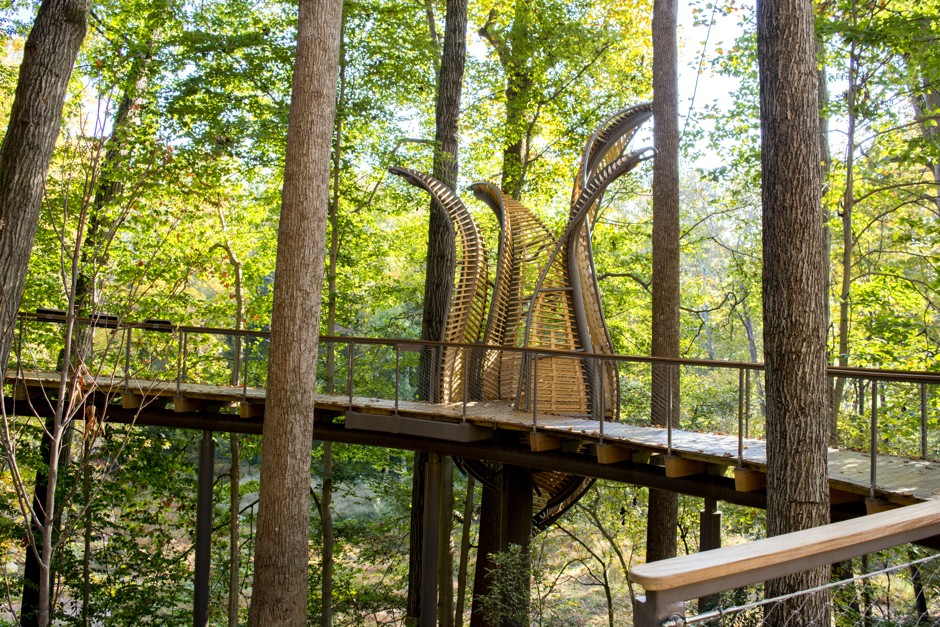 The WildWoods installation at the Fernbank Forest is an elevated walkway with interactive exhibits, an education pavilion, and “tree pods” offering views into the old-growth forest. Photo by Fernbank Museum of Natural History.

The landscape architecture firm Sylvatica Studio designed an elevated walkway that guides visitors through “WildWoods,” a green space that links the museum to the old-growth forest, with tulip-shaped “tree pods” where visitors can pause. The pods and walkway were not built in the old-growth forest itself to protect it. “Having the forest open and accessible to all visitors is crucial for the museum, because it reignites the central, original mission of Fernbank—to preserve Fernbank Forest as a school in the woods for nature study,” Anders said.*

It may seem counterintuitive that foot traffic in or near the forest would help protect it. There was controversy over trails planned for the Spring Creek Forest Preserve in Garland, Texas, that would bring visitors into that old-growth forest, which has wildflowers not seen elsewhere in the Dallas area and a unique variety of oak trees. But with new development rising nearby, the forest is a potential refuge for future residents.

“I grew up in the Bronx—the South Bronx to be exact—and my mother wanted me to learn about plants,” he said. “She sent me as a child to the [New York Botanical Garden], and as time went by I took all the courses they offered to the kids.” When he was 15, the botanical garden hired him to do a survey of the hemlock forest. “I went out and remapped it, and compared it to a 1936 map, and that was where I cut my teeth on my first historic ecology project.”

Loeb confirmed the value of protecting primeval forests. “Replacing an old forest is not just a simple matter of digging out the stump and putting a new tree in,” he said. “Young trees don’t have what we call ‘niche space’—a small tree cannot house as many different species or as many different individual species, compared to a larger, older tree.”

Public access that respects the integrity of the forest can encourage future research and protection. Urban old-growth forests are small fragments of a vanished landscape, revealing how dramatically the environment of the United States has changed over hundreds and thousands of years.

Allison C. Meier is a Brooklyn-based writer focused on the arts and overlooked history. She was previously senior editor at Atlas Obscura and more recently a staff writer at Hyperallergic.