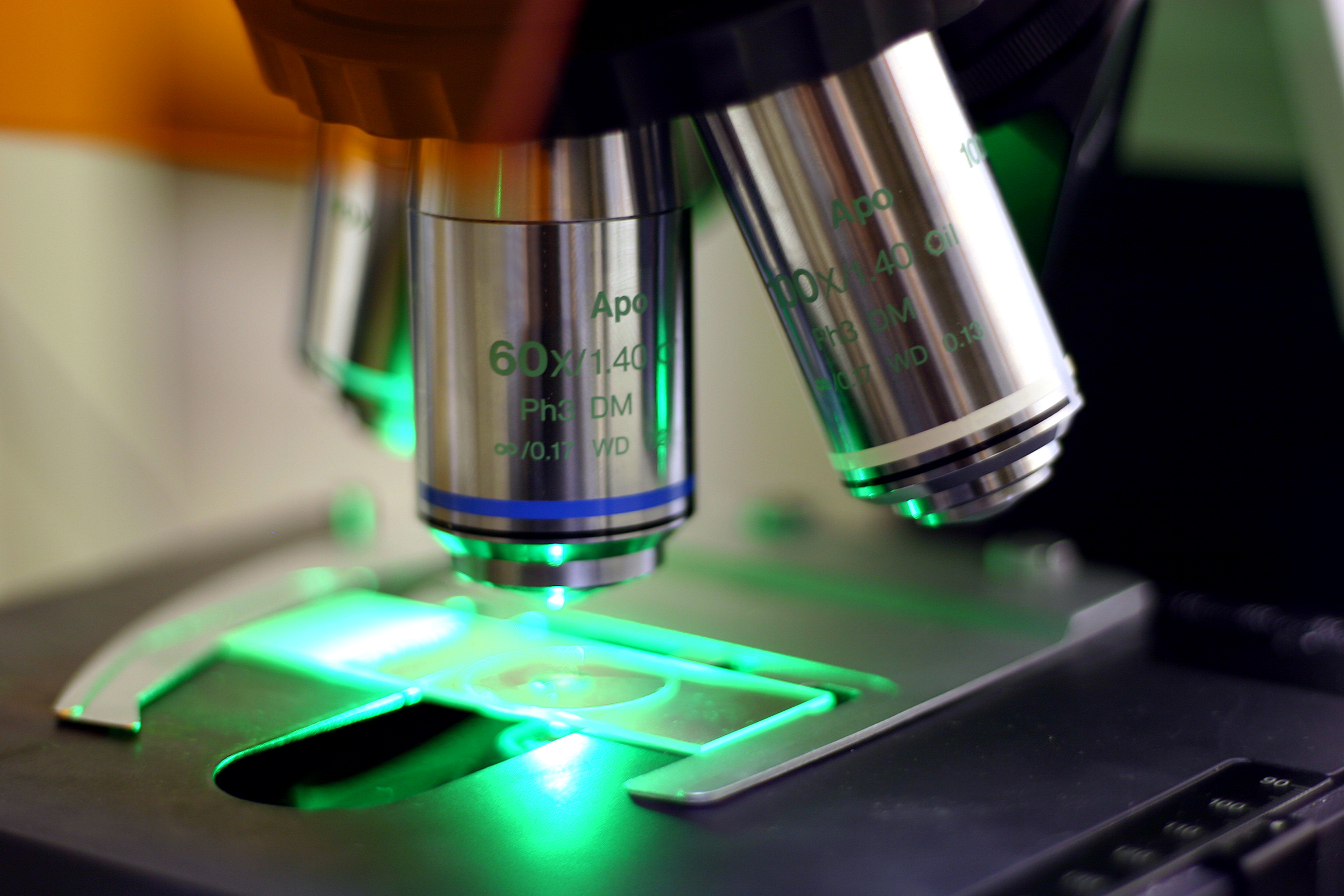 The tree of life just got another major branch. Researchers recently found a certain rare and mysterious microbe called a hemimastigote in a clump of Nova Scotian soil. Their subsequent analysis of its DNA revealed that it was neither animal, plant, fungus nor any recognized type of protozoan — that it in fact fell far outside any of the known large categories for classifying complex forms of life (eukaryotes). Instead, this flagella-waving oddball stands as the first member of its own “supra-kingdom” group, which probably peeled away from the other big branches of life at least a billion years ago.

“It’s the sort of result you hope to see once in a career,” said Alastair Simpson, a microbiologist at Dalhousie University who led the study.

Impressive as this finding about hemimastigotes is on its own, what matters more is that it’s just the latest (and most profound) of a quietly and steadily growing number of major taxonomic additions. Researchers keep uncovering not just new species or classes but entirely new kingdoms of life — raising questions about how they have stayed hidden for so long and how close we are to finding them all.

Yana Eglit is a Dalhousie graduate student dedicated to discovering novel lineages of the single-cell eukaryotes called protists. While hiking in Nova Scotia on a cold spring day in 2016, she fell back from her friends to scrape a few grams of dirt into a plastic tube. (Such impromptu soil sampling, she said, is “a professional hazard.”) Back in the lab, Eglit soaked her sample in water, and over the next month she periodically peeked at it through a microscope for signs of unusual life.

Late one evening, something odd in the sample caught her eye. An elongated cell radiating whiplike flagella was “awkwardly swimming, as though it didn’t realize it had all these flagella that could help it move,” Eglit said. Under a more powerful scope, she saw it fit the description of a hemimastigote, a rare kind of protist that was notoriously hard to cultivate. The next morning, the lab was abuzz with excitement over the opportunity to describe and sequence the specimen. “We dropped everything,” she recalled.

Hemimastigotes represent one of a handful of Rumsfeldian “known unknown” protist lineages — moderately well-described groups whose positions on the tree of life are not precisely known because they are difficult to culture in a lab and sequence. Protistologists have used peculiarities of hemimastigotes’ structure to infer their close relatives, but their guesses were “‘shotgunned’ all over the phylogeny,” Simpson said. Without molecular data, lineages like hemimastigotes remain orphans of unknown ancestry.

But a new method called single-cell transcriptomics has revolutionized such studies. It enables researchers to sequence large numbers of genes from just one cell. Gordon Lax, another graduate student in the Simpson lab and an expert on this method, explained that for hard-to-study organisms like hemimastigotes, single-cell transcriptomics can produce genetic data of a quality previously reserved for more abundant cells, making deeper genomic comparisons finally possible.

The team sequenced more than 300 genes, and Laura Eme, now a postdoctoral researcher at Uppsala University, modeled how those genes evolved to infer a classification for hemimastigotes. “We were fully expecting them to fall within one of the existing supergroups,” she explained. Lab members were instead stunned to find that hemimastigotes fit nowhere on the tree. They represented their own distinct lineage apart from the other half-dozen super groups. 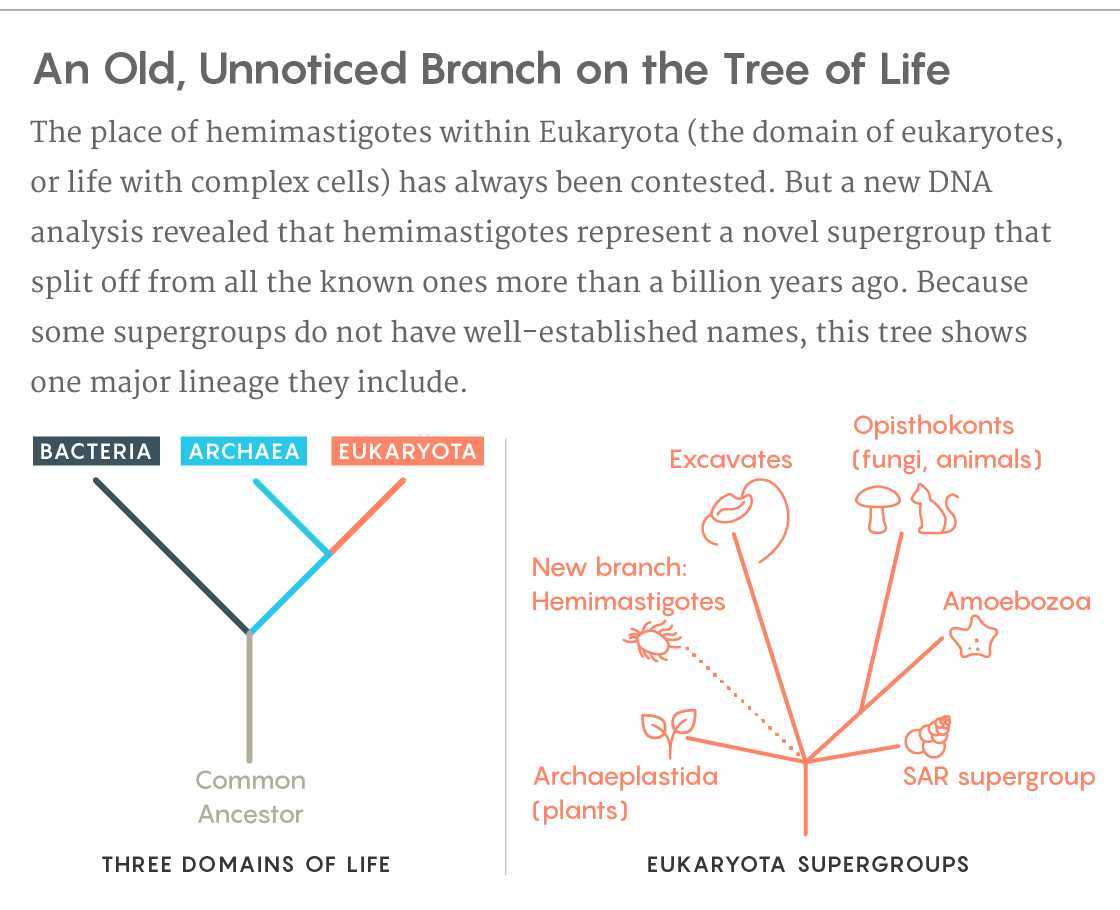 To understand how evolutionarily distinct the hemimastigote lineage is, imagine the eukaryotic tree splayed out before you on the ground as a narrowing set of paths, which begin with places for all living groups of eukaryotes near your toes and converge far in the distance at our common ancestor. Starting at our mammalian tip, walk down the path and back into history, past the fork where our lineage diverged from reptiles and birds, past the turnoffs for fishes, for starfish and for insects, and then farther still, beyond the split that separates us from fungi. If you turn around and look back, all the diverse organisms you passed fall within just one of the six eukaryote supergroups. Hemimastigotes are still up ahead, in a supergroup of their own, on a path that nothing else occupies.

Fabien Burki, a biologist at Uppsala University in Sweden who wasn’t involved in this study, was happy to see this result, but not entirely surprised. “It’s a bit like searching for life on other planets,” he said. “When we finally find it, I don’t think we will be very surprised, but it will be a huge discovery.”

Burki, Simpson, Eglit and many others also think we have much more of the tree of life to uncover, largely because of how quickly it’s changing. “The tree of life is being reshaped by new data. It is really quite different than even what it was 15 or 20 years ago,” Burki said. “We’re seeing a tree with many more branches than we thought.”

Finding a lineage as distinct as hemimastigotes is still relatively rare. But if you go down a level or two on the hierarchy, to the mere kingdom level — the one that encompasses, say, all animals — you find that new major lineages are popping up about once a year. “That rate isn’t slowing down,” said Simpson. “If anything, it might be speeding up.”

The availability of more capable sequencing technology such as single-cell transcriptomics is part of what’s driving this trend in eukaryotes, especially for known unknown groups. It empowers researchers to glean usable DNA from single specimens. But Eme cautions that these methods still require the keen eye of skilled protistologists, like Eglit, “so that we can actually target what we want to look at.”

Another kind of sequencing, called metagenomics, could accelerate discovery even further. Researchers can now venture into the field, grab a sample of dirt from the trail or a biofilm from a deep-sea vent, and sequence everything in the sample. The catch is that it’s usually just a snippet of one gene. For bacteria and archaea — organisms in the two other domains of life distinct from eukaryotes — that’s usually enough to work with, and metagenomics has been behind recent huge discoveries such as the Asgard archaea, an enormous phylum of archaea totally unknown to science until about three years ago.

But for eukaryotes, which tend to have larger and more complicated genomes, metagenomics is a troublesomely broad way to sample. It reveals many types of organisms that live in an environment, “but unless you have a larger known reference sequence, it’s very difficult to put these different things into an evolutionary framework,” Burki said. That’s why, according to Simpson, most of the recent, really deep eukaryotic lineages have been discovered the “old fashioned” way, through identifying a weird protist in the lab and targeting it for sequencing.

“But the two methods are complementary and inform one another,” Simpson said. For example, it’s now clear that hemimastigotes popped up in previously published metagenomic databases. Yet “we just had no way of recognizing them until we had longer hemimastigote sequences to compare them to,” he said. Metagenomics can point to potential hot spots of unknown diversity, and deeper sequencing can make metagenomic data more meaningful.

The future is bright for researchers cataloging diversity, in both ordinary and extraordinary environments. While metagenomic tools allow us to explore extreme environments — like the sediment near hydrothermal vents where the Asgard archaea were found — researchers can also find new lineages in their backyards. “This whole new supra-kingdom lineage was discovered by a graduate student out on a hike who happened to collect some dirt,” Burki said. “Imagine if we could scan every environment on Earth.”

As scientists continue to fill out the tree, the algorithms used to add branches will only get more efficient, according to Eme. This will help researchers resolve deeper, more ancient splits in the history of life. “Our understanding of how life unfolded is still very much incomplete,” said Burki. Questions like why eukaryotes emerged or how photosynthesis evolved remain unanswered because “we don’t have a tree that is stable enough to pinpoint where these key events happened,” he said.

Beyond answering such fundamental questions, the simple joy of discovery motivates researchers like Burki and Eglit. “The microbial world is a wide-open frontier,” said Eglit. “It’s thrilling to explore what’s out there.”