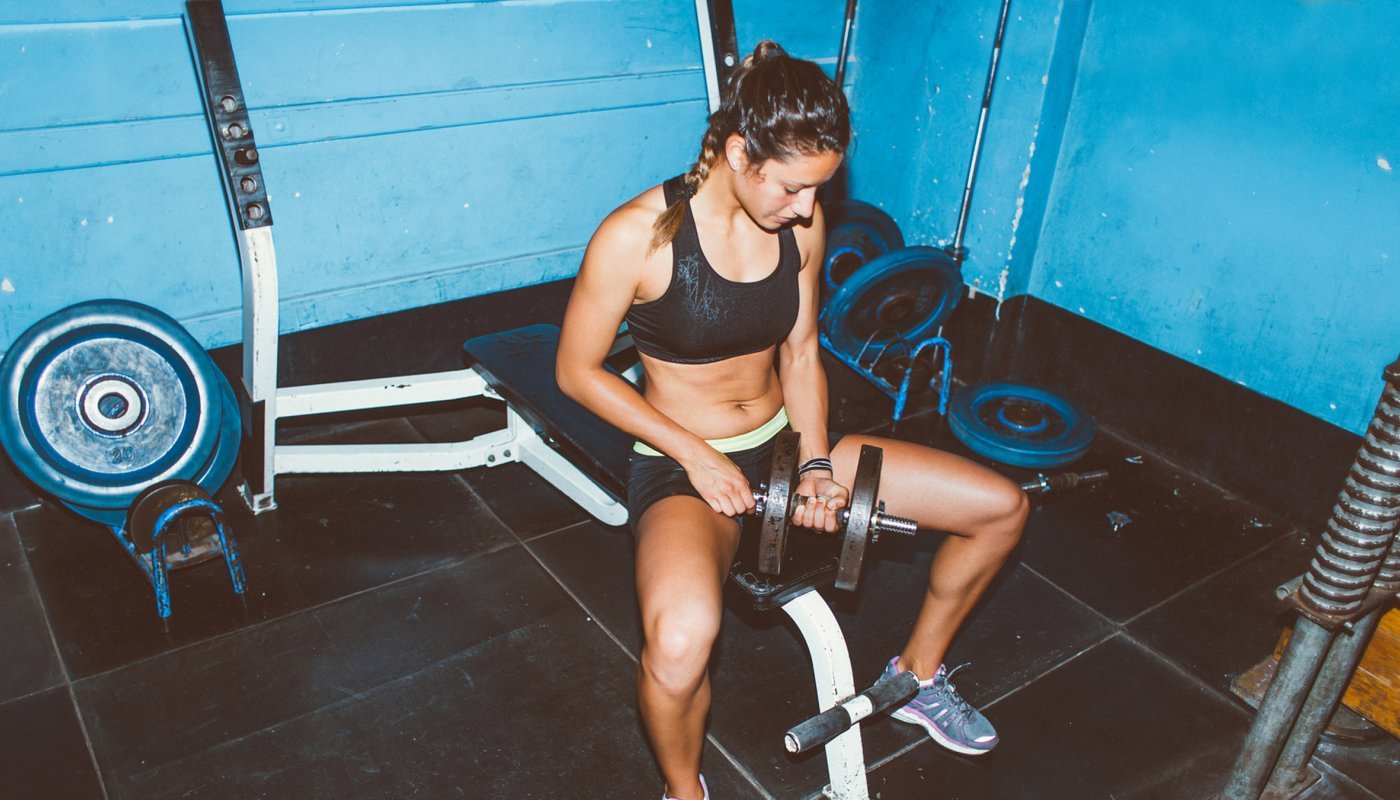 Strength training is good for you. Photo from Studio Firma/Stocksy.

Trust me, I understand—in theory—that I should be stronger. Yes, I’m an aerobic beast (or an aerobic addict, if you prefer), but I’m not oblivious to the benefits of having a reasonable amount of muscle. When I play the “look, you’re touching the ceiling!” game with my 18-month-old, I’d prefer that she get bored before I have to admit that Daddy can’t military-press her anymore. And I’m hoping that 20 years from now I’ll still be able to push myself out of an armchair without help.

But there’s a gap between “should” and “do.” This gap is one of the most vexing riddles in public health, and even people like me, who spend their days telling other people what they should be doing, aren’t immune to it. For that reason, I’m always eager for reminders of what’s at stake—and two papers offer some eye-opening insights into the benefits of strength training, even for people who consistently blow the aerobic exercise guidelines out of the water.

The first is an analysis of the link between strength, muscle mass, and mortality, from a team at Indiana University using data from the National Health and Nutrition Examination Survey. The design was pretty straightforward: They assessed 4,440 adults ages 50 or up who had their strength and muscle mass assessed between 1999 and 2002. The researchers checked back in 2011 to see who had died.

For muscle mass, they used a DEXA scanner to determine that 23 percent of the subjects met one definition of “low muscle mass,” with total muscle in the arms and legs adding up to less than 43.5 pounds in men or 33 pounds in women. For strength, they used a device that measures maximum force of the knee extensors (the muscles that allow you to straighten your knee) and found that 19 percent of the subjects had low muscle strength.

The results, published in Medicine and Science in Sports and Exercise, found that those with low muscle strength were more than twice as likely to have died during the follow-up period than those with normal muscle strength. In contrast, having low muscle mass didn’t seem to matter as much. 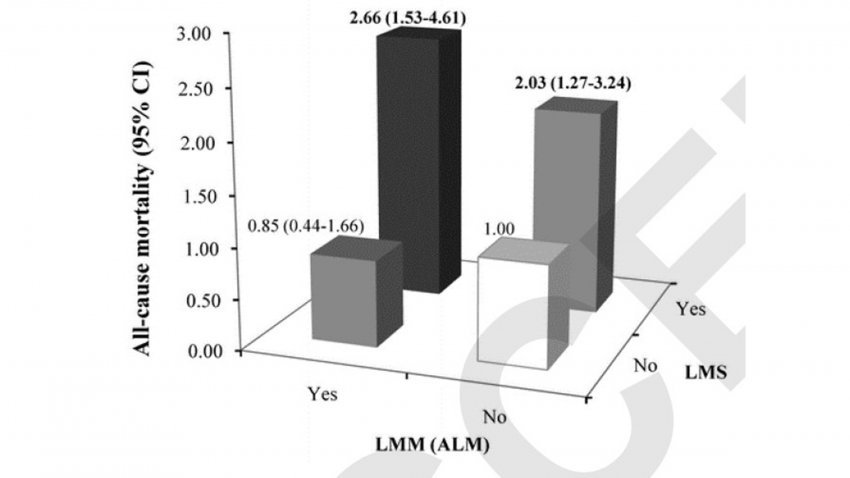 (Medicine and Science in Sports and Exercise)

The reference group, on the right side in the front, is those without either condition. In comparison, those with both conditions were 2.66 times as likely to die during the study. Having low muscle mass but normal strength, on the other hand, didn’t seem to be such a bad thing.

The message here? Function matters more than what you look like. That doesn’t mean you can afford to let your muscle melt away as you age; having a good reserve of muscle mass may be important, for example, if you end up having to spend time in the hospital at some point. But it’s good news for those of us who struggle to put on muscle but persist in slogging through a reasonable number of pull-ups and other strength exercises.

The other study took aim at the perception that strength training is an afterthought in public health guidelines. Most of us remember that we’re supposed to get at least 150 minutes of moderate exercise or 75 minutes of vigorous exercise per week. Reams of data support the beneficial health effects of hitting this goal. 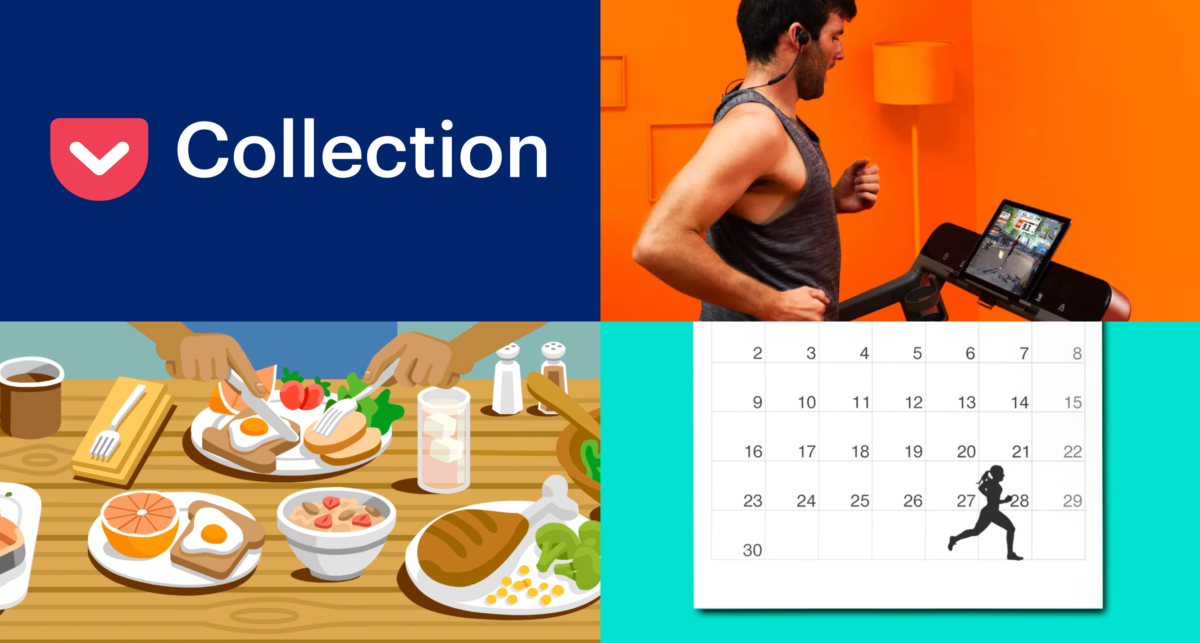 How to Start Running: A Beginner’s Guide

Want to start a running habit but have no idea where to start? Here’s everything you need to know to start running and actually enjoy it.

But the guidelines also suggest doing “strength-promoting exercise” at least twice a week—a clause that’s often forgotten and the benefits of which are usually framed in terms of avoiding frailty and improving quality of life, rather than actually extending it.

Researchers in Australia analyzed data from 80,000 adults in England and Scotland who completed surveys about their physical activity patterns starting in the 1990s. The headline result was that those who reported doing any strength training were 23 percent less likely to die during the study period and 31 percent less likely to die of cancer. Meeting the guidelines by strength training twice a week offered a little extra benefit.

One interesting (and, for me, reassuring) detail: Strength training in a gym and doing bodyweight exercises seemed to confer roughly equivalent benefits. So you don’t necessarily need to heave around large quantities of iron.

In this particular cohort, the benefits of meeting only the strength-training guidelines seemed to be roughly equivalent to meeting only the aerobic-training guidelines—at least in terms of overall mortality. However, strength training didn’t confer any protection against heart disease. There’s some evidence that strength training may reduce blood pressure but increase artery stiffness, effectively canceling out the heart benefits. This study can’t answer that question, but the findings do suggest that ditching aerobic exercise entirely may not be optimal. And indeed, the best outcomes of all—a 29 percent reduction in mortality risk during the study—accrued to those who met both the aerobic and strength-training guidelines.

So, in summary, strength training is good for you. Does that really tell you anything you didn’t know? Perhaps not.

That said, I recently wrote about a study in which runners received automated online advice to help them avoid injuries. The advice seemed painfully obvious: Listen to your body, don’t increase pace and volume too suddenly, and so on. But it worked. Injuries were reduced by 13.1 percent. That’s more or less what I’m hoping for by writing this piece, for all of us: that a reminder of something obvious, bolstered by fresh evidence, will help me continue to do what I know I should.