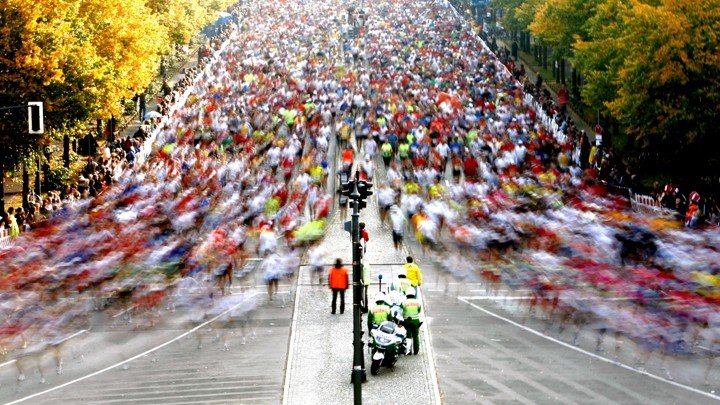 Just as fish presumably don’t know they’re wet, many English speakers don’t know that the way their language works is just one of endless ways it could have come out. It’s easy to think that what one’s native language puts words to, and how, reflects the fundamentals of reality.

But languages are strikingly different in the level of detail they require a speaker to provide in order to put a sentence together. In English, for example, here’s a simple sentence that comes to my mind for rather specific reasons related to having small children: “The father said ‘Come here!’” This statement specifies that there is a father, that he conducted the action of speaking in the past, and that he indicated the child should approach him at the location “here.” What else would a language need to do?

Well, for a German speaker, more. In “Der Vater sagte ‘Komm her!’”, although it just seems like a variation on the English sentence, more is happening. “Der,” the word for “the,” is a choice among other possibilities: It’s the one used for masculine nouns only. If the sentence were about a mother, it would have to use the feminine die, or if about a girl, the neuter das (for reasons unnecessary to broach here!). The word for “said,” sagte, is marked with a suffix for the third-person singular; if it were “you said,” then it would be sagtest—in English, those forms don’t vary in the past tense. Then, her for “here” means “to here”: In German one must become what feels to an English speaker rather Shakespearean and say “hither” when that’s what is meant. “Here” in the sense of just sitting “here” is a different word, hier.

This German sentence, then, requires you to pay more attention to the genders of people and things, to whether it’s me, you, her, him, us, y’all, or them driving the action. It also requires specifying not just where someone is but whether that person is moving closer or farther away. German is, overall, busier than English, and yet Germans feel their way of putting things is as normal as English speakers feel their way is.

Other languages occupy still other places on the linguistic axis of “busyness,” from prolix to laconic, and it’s surprising what a language can do without. In Mandarin Chinese, a way of saying “The father said ‘Come here!’” is “Fùqīn shuō ‘Guò lái zhè lǐ!’” Just as in English, there is no marker for the father’s gender, nor does the form of the word shuō for “said” indicate whether the speaker is me, you, or him. The word for “here,” zhè lǐ, can mean either “right here” or “to here,” just like in English. But Mandarin is even more telegraphic. There is no definite article like “the.” The word for “said” lacks not only a suffix for person, but is also not marked for tense; it just means “say.” It is assumed that context will indicate that this event happened in the past. Much of learning Mandarin involves getting a sense of how much one can not say in an acceptable sentence.

Moreover, anyone who has sampled Chinese, or Persian, or Finnish, knows that a language can get along just fine with the same word for “he” and “she.”* And whereas Mandarin can mark tense but often doesn’t, in the Maybrat language of New Guinea, there’s pretty much no way to mark it at all—context takes care of it and no one bats an eye.

If there were a prize for the busiest language, then a language like Kabardian, also known as Circassian and spoken in the Caucasus, would win. In the simple sentence “The men saw me,” the word for “saw” is sǝq’ayǝƛaaɣwǝaɣhaś (pronounced roughly “suck-a-LAGH-a-HESH”). This seems like a majestic monster of a word, and yet despite its air of “supercalifragilisticexpealidocious,” the word for “saw” is every bit as ordinary for Karbadian-speakers as English-speakers’ “saw” is for them. It’s just that Karbadian-speakers have to pack so much more into their version. In sǝq’ayǝƛaaɣwǝaɣhaś, other than the part meaning “see,” there is a bit that reiterates that it’s me who was seen, even though the sentence would include a separate word for “me” elsewhere. Then there are other bits that show that the seeing was most significant to “me” rather than to the men or anyone else; that the seeing was done by more than one person (despite the sentence spelling out elsewhere that it was plural “men” who did the seeing); that this event did not happen in the present; that on top of this, the event happened specifically in the past rather than the future; and finally a bit indicating that the speaker really means what he’s saying.

So does the contrast between Riau Indonesian’s “chicken eat” and Kabardian’s “they saw me and it affected me, not now, and I really mean it” mean that each language gives its speakers a different way of looking at the world? It’s an intriguing idea, first formulated by anthropologist and linguist Edward Sapir and amateur linguist (and fire inspector!) Benjamin Whorf. If it were correct, an English-speaker would generally think about the past more than a Chinese-speaker would, while Germans would think more about movement than Americans or Brits.

Experiments have shown that this is often true to a faint, flickering degree a psychologist can detect in the artifice of experimental conditions. But does this mean a different way of experiencing life? Is a Kabardian shopkeeper in the Caucasus more exquisitely attuned to the nuances of experience than a Riau Indonesian-speaking fisherman in Sumatra? If that Kabardian shopkeeper’s jam-packed verbs mean that he vibrates in tune to the jots and tittles of life, then doesn’t one have to say that the Riau Indonesian speaker, whose grammar directs his attention to so few details, is something of a limp string on the guitar? We would run into similarly hopeless comparisons around the world. The Zulu speaker would be hypervigilant given the complexities of his language, the Samoan speaker inattendant given the less obsessively complicated nature of hers.

If thought and culture aren’t why some languages pile it on while others take it light, then what is the reason? Part of the answer is unsatisfying but powerful: chance. Time and repetition wear words out, and what wears away is often a nugget of meaning. This happens in some languages more than others. Think of the French song “Alouette, gentille alouette …” (“lark, nice lark”) in which one sings “ahh-loo-eh-tuh.” In running speech the word has long been pronounced just “ah-loo-ett” with no -uh at the end. That –uh in the song today is a leftover from the way the word actually was once pronounced normally, and it indicated the word’s feminine gender to the listener. Today, beyond marginal contexts like that song, only the final e in the spelling of alouette indicates its gender; hearing it in a sentence we’d have to rely on the definite article la alone to know that the word is feminine.

In a language where final sounds take the accent, such sounds tend to hold on longer because they are so loud and clear—you’re less likely to mumble it and people listening are more likely to hear it. In Hebrew, “Thank you very much,” is “Toda raba,” pronounced “toe-DAH rah-BAH.” The sounds at the end of the word mark gender in Hebrew, too, and they aren’t going anywhere anytime soon because they are enunciated with force.

When a language seems especially telegraphic, usually another factor has come into play: Enough adults learned it at a certain stage in its history that, given the difficulty of learning a new language after childhood, it became a kind of stripped-down “schoolroom” version of itself. Because all languages, are, to some extent, busier than they need to be, this streamlining leaves the language thoroughly complex and nuanced, just lighter on the bric-a-brac that so many languages pant under. Even today, Indonesian is a first language to only one in four of its speakers; the language has been used for many centuries as a lingua franca in a vast region, imposed on speakers of several hundred languages. This means that while other languages can be like overgrown lawns, Indonesian’s grammar has been regularly mowed, such that especially the colloquial forms are tidier. Lots of adult learning over long periods of time is also why, for example, the colloquial forms of Arabic like Egyptian and Moroccan are somewhat less elaborated than Modern Standard Arabic—they were imposed on new people as Islam spread after the seventh century.

In contrast, one cannot help suspecting that not too many adults have been tackling the likes of sǝq’ayǝƛaaɣwǝaɣhaś. Kabardian has been left to its own devices, and my, has it hoarded a lot of them. This is, as languages go, normal, even if Kabardian is rather extreme. By contrast, only a few languages have been taken up as vehicles of empire and imposed on millions of unsuspecting and underqualified adults. Long-dominant Mandarin, then, is less “busy” than Cantonese and Taiwanese, which have been imposed on fewer people. English came out the way it did because Vikings, who in the first millennium forged something of an empire of their own in northern and western Europe, imposed themselves on the Old English of the people they invaded and, as it were, mowed it. German, meanwhile, stayed “normal.”

Even if languages’ differences in busyness can’t be taken as windows on psychological alertness, the differences remain awesome. In a Native American language of California called Atsugewi (now extinct), if a tree was burned and we found the ashes in a creek afterward, we would have said that soot w’oqhputíc’ta into the creek. W’oqhputíc’ta is a conglomeration of bits that mean “it moved like dirt, in a falling fashion, into liquid, and for real.” In English, we would just say “flowed.”

John McWhorter teaches linguistics at Columbia University, hosts the podcast Lexicon Valley, and is the author, most recently, of Words on the Move.