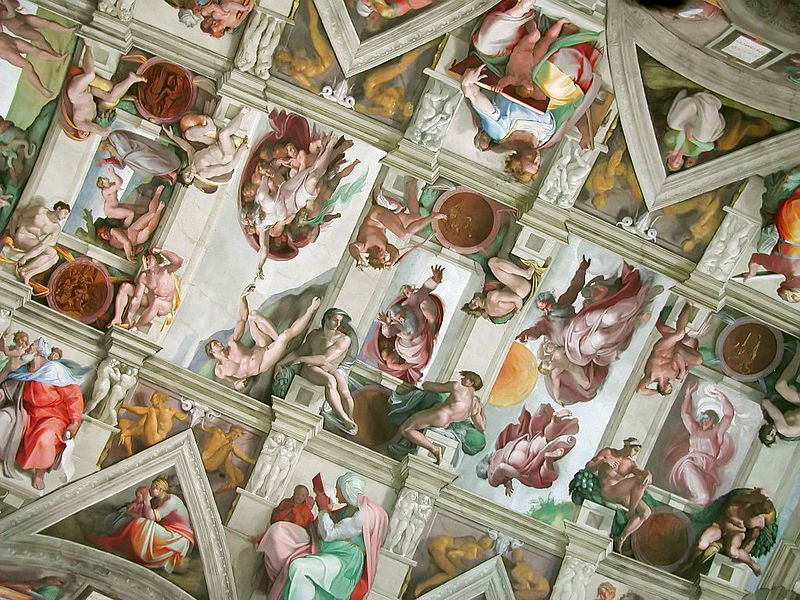 As the home of some of the greatest works of art produced by humanity, the Sistine Chapel in Vatican City is a popular tourist destination (to put it mildly). If you've been one of the 4 million visitors to the famous landmark each year, you've probably learned of one aspect of the room filled with Michelangelo's beautiful, biblical frescos that tends to come as a surprise to first-time guests.

There's no photography or video allowed in the Sistine Chapel.

Yes, despite the rules that encourage quiet contemplation of the fantastic, eye-popping art that adorns nearly every inch of the walls and ceiling of the Sistine Chapel, visitors to the chapel will find their experience peppered with terse shouts of “No photo! No video!” from security guards. The prohibition against photography has been in place for several decades, and while many assume that the no-photography rule is in place to prevent the flashing of cameras from affecting the art, the real reason dates back to the restoration of the chapel's art that began in 1980 and took nearly 20 years to complete.

When Vatican officials decided to undertake a comprehensive restoration of Michelangelo's art in the chapel, the price tag for such an endeavor prompted them to seek outside assistance to fund the project. In the end, the highest bidder was Nippon Television Network Corporation of Japan, whose $3 million offering (which eventually ballooned to $4.2 million) was unmatched by any entity in Italy or the U.S.

In return for funding the renovation, Nippon TV received the exclusive rights to photography and video of the restored art, as well as photos and recordings of the restoration process by photographer Takashi Okamura, who was commissioned by Nippon TV. While many initially scoffed at the deal, the high-resolution photos provided by Nippon offered a hyper-detailed peek behind all of the scaffolding that hid each stage of restoration, and eventually won over some critics of the arrangement.

As a result of the deal, Nippon produced multiple documentaries, art books, and other projects featuring their exclusive photos and footage of the Sistine Chapel restoration, including several celebrated collections of the photographic surveys that informed the project.

The ban on photography within the chapel remains in effect despite the waning of the terms of Nippon's deal. In 1990, The New York Times reported that Nippon's commercial exclusivity on photos expired three years after each stage of the restoration was completed. For example, photos of Michelangelo's epic depiction of Last Judgment were no longer subject to Nippon's copyright as of 1997, because that stage of the restoration was completed in 1994.

For the record, Nippon has stated that their photo ban did not apply to "ordinary tourists," but for simplicity's sake—lest some professional photog disguised himself in Bermuda shorts and socks and sandals—authorities made it an across-the-board policy.

The “No Photos! No Video!” rule remains in place for the Sistine Chapel (though as some recent visitors can attest, its enforcement isn't exactly strict). Given the damage that can be caused by thousands of cameras' flashes going off in the chapel each day, it's no surprise that Vatican officials decided not to end the ban when Nippon's contract expired.

After all, the chapel houses some of the greatest art in the world—and a gift shop stocked with souvenir photos, of course.