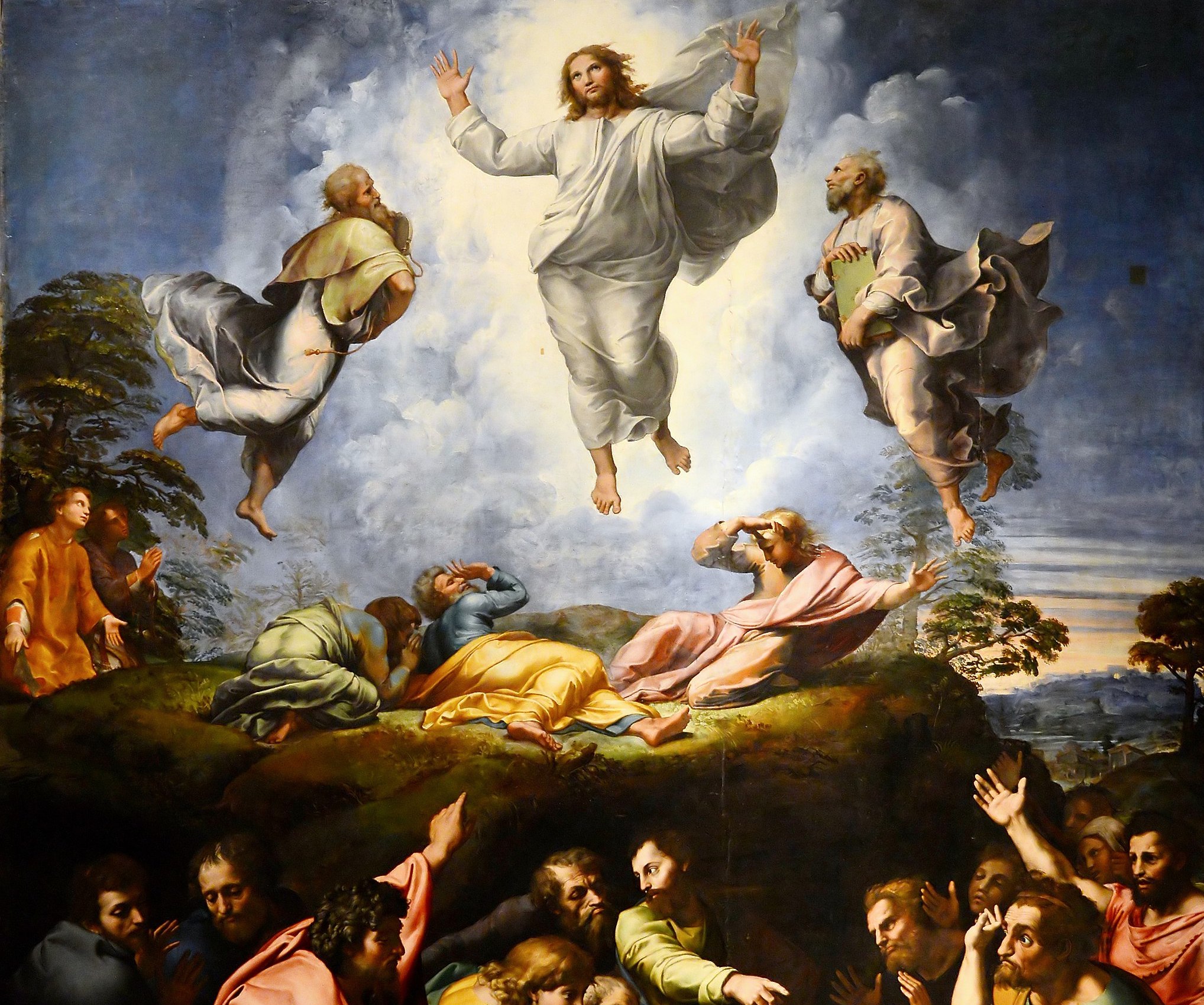 The portrayal of Jesus as a white, European man has come under renewed scrutiny during this period of introspection over the legacy of racism in society.

As protesters called for the removal of Confederate statues in the U.S., activist Shaun King went further, suggesting that murals and artwork depicting “white Jesus” should “come down.”

His concerns about the depiction of Christ and how it is used to uphold notions of white supremacy are not isolated. Prominent scholars and the archbishop of Canterbury have called to reconsider Jesus’ portrayal as a white man.

As a European Renaissance art historian, I study the evolving image of Jesus Christ from A.D. 1350 to 1600. Some of the best-known depictions of Christ, from Leonardo da Vinci’s “Last Supper” to Michelangelo’s “Last Judgment” in the Sistine Chapel, were produced during this period.

But the all-time most-reproduced image of Jesus comes from another period. It is Warner Sallman’s light-eyed, light-haired “Head of Christ” from 1940. Sallman, a former commercial artist who created art for advertising campaigns, successfully marketed this picture worldwide. 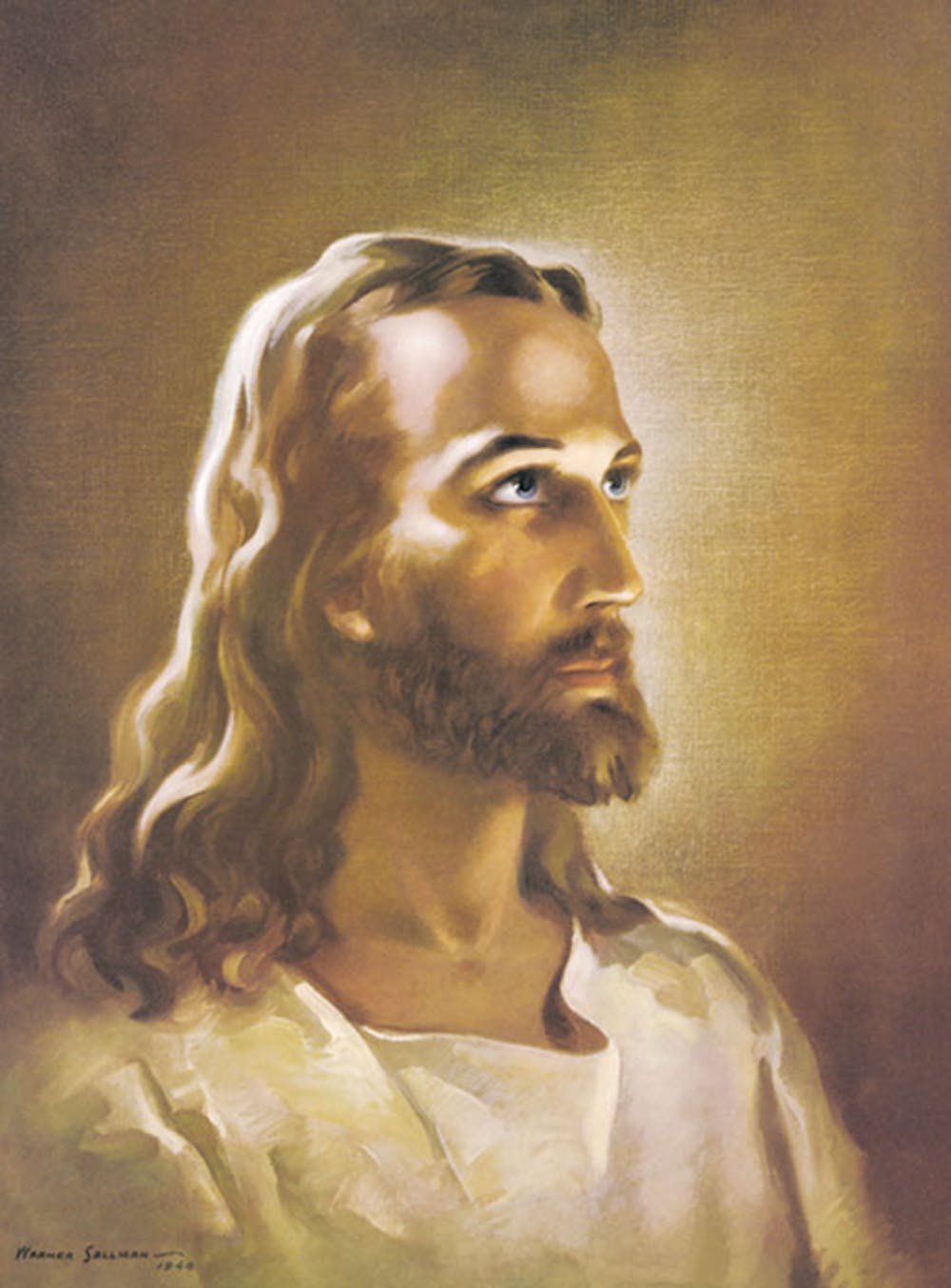 Through Sallman’s partnerships with two Christian publishing companies, one Protestant and one Catholic, the Head of Christ came to be included on everything from prayer cards to stained glass, faux oil paintings, calendars, hymnals and night lights.

Sallman’s painting culminates a long tradition of white Europeans creating and disseminating pictures of Christ made in their own image.

In Search of the Holy Face

The historical Jesus likely had the brown eyes and skin of other first-century Jews from Galilee, a region in biblical Israel. But no one knows exactly what Jesus looked like. There are no known images of Jesus from his lifetime, and while the Old Testament Kings Saul and David are explicitly called tall and handsome in the Bible, there is little indication of Jesus’ appearance in the Old or New Testaments. 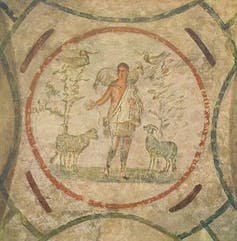 Even these texts are contradictory: The Old Testament prophet Isaiah reads that the coming savior “had no beauty or majesty,” while the Book of Psalms claims he was “fairer than the children of men,” the word “fair” referring to physical beauty.

The earliest images of Jesus Christ emerged in the first through third centuries A.D., amidst concerns about idolatry. They were less about capturing the actual appearance of Christ than about clarifying his role as a ruler or as a savior.

To clearly indicate these roles, early Christian artists often relied on syncretism, meaning they combined visual formats from other cultures.

Probably the most popular syncretic image is Christ as the Good Shepherd, a beardless, youthful figure based on pagan representations of Orpheus, Hermes and Apollo.

In other common depictions, Christ wears the toga or other attributes of the emperor. The theologian Richard Viladesau argues that the mature bearded Christ, with long hair in the “Syrian” style, combines characteristics of the Greek god Zeus and the Old Testament figure Samson, among others.

The first portraits of Christ, in the sense of authoritative likenesses, were believed to be self-portraits: the miraculous “image not made by human hands,” or acheiropoietos. 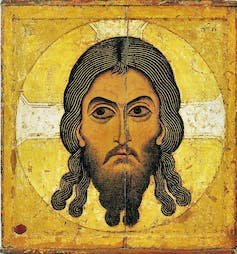 This belief originated in the seventh century A.D., based on a legend that Christ healed King Abgar of Edessa in modern-day Urfa, Turkey, through a miraculous image of his face, now known as the Mandylion.

A similar legend adopted by Western Christianity between the 11th and 14th centuries recounts how, before his death by crucifixion, Christ left an impression of his face on the veil of Saint Veronica, an image known as the volto santo, or “Holy Face.”

These two images, along with other similar relics, have formed the basis of iconic traditions about the “true image” of Christ. 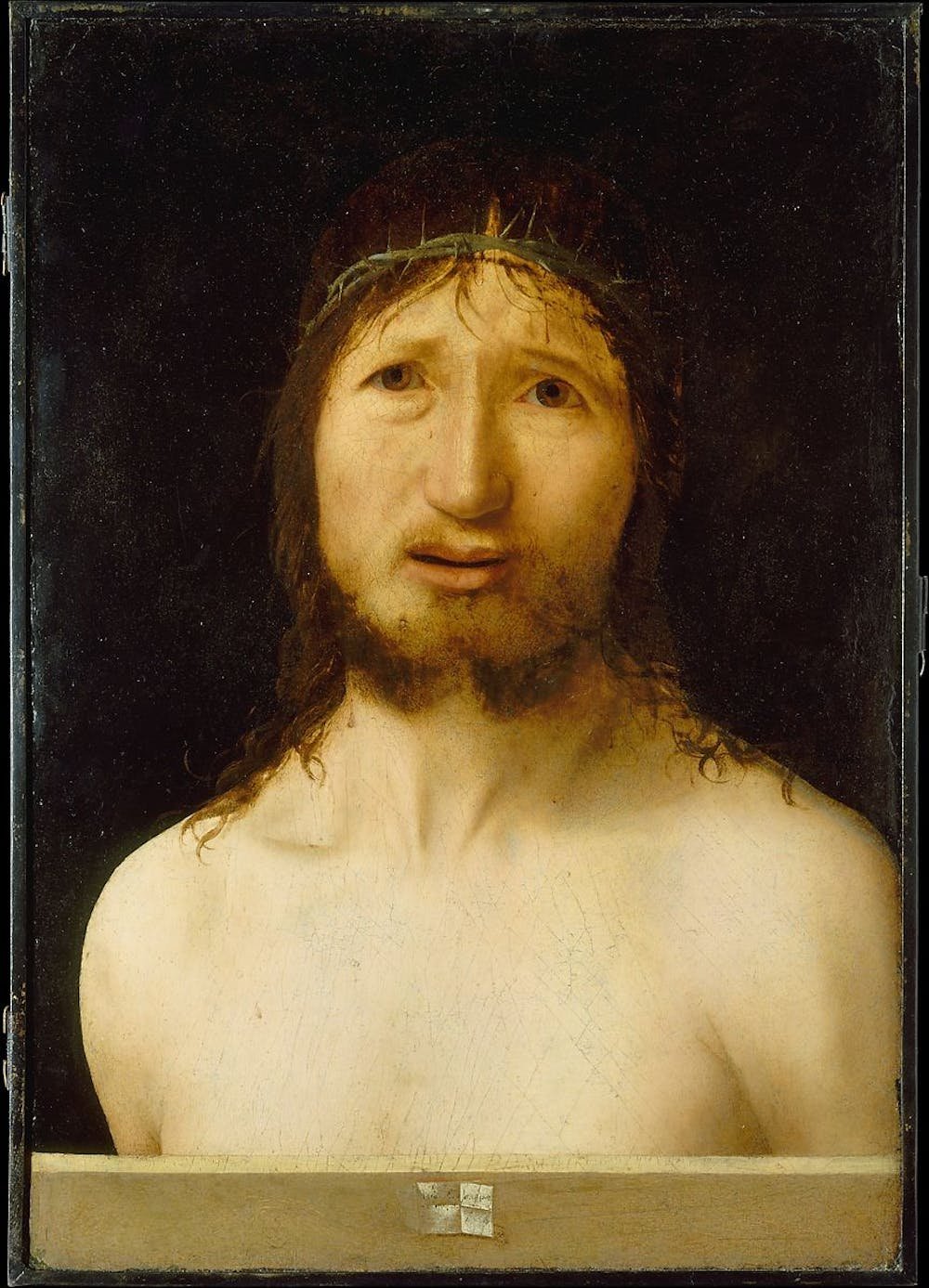 From the perspective of art history, these artifacts reinforced an already standardized image of a bearded Christ with shoulder-length, dark hair.

In the Renaissance, European artists began to combine the icon and the portrait, making Christ in their own likeness. This happened for a variety of reasons, from identifying with the human suffering of Christ to commenting on one’s own creative power.

The 15th-century Sicilian painter Antonello da Messina, for example, painted small pictures of the suffering Christ formatted exactly like his portraits of regular people, with the subject positioned between a fictive parapet and a plain black background and signed “Antonello da Messina painted me.” 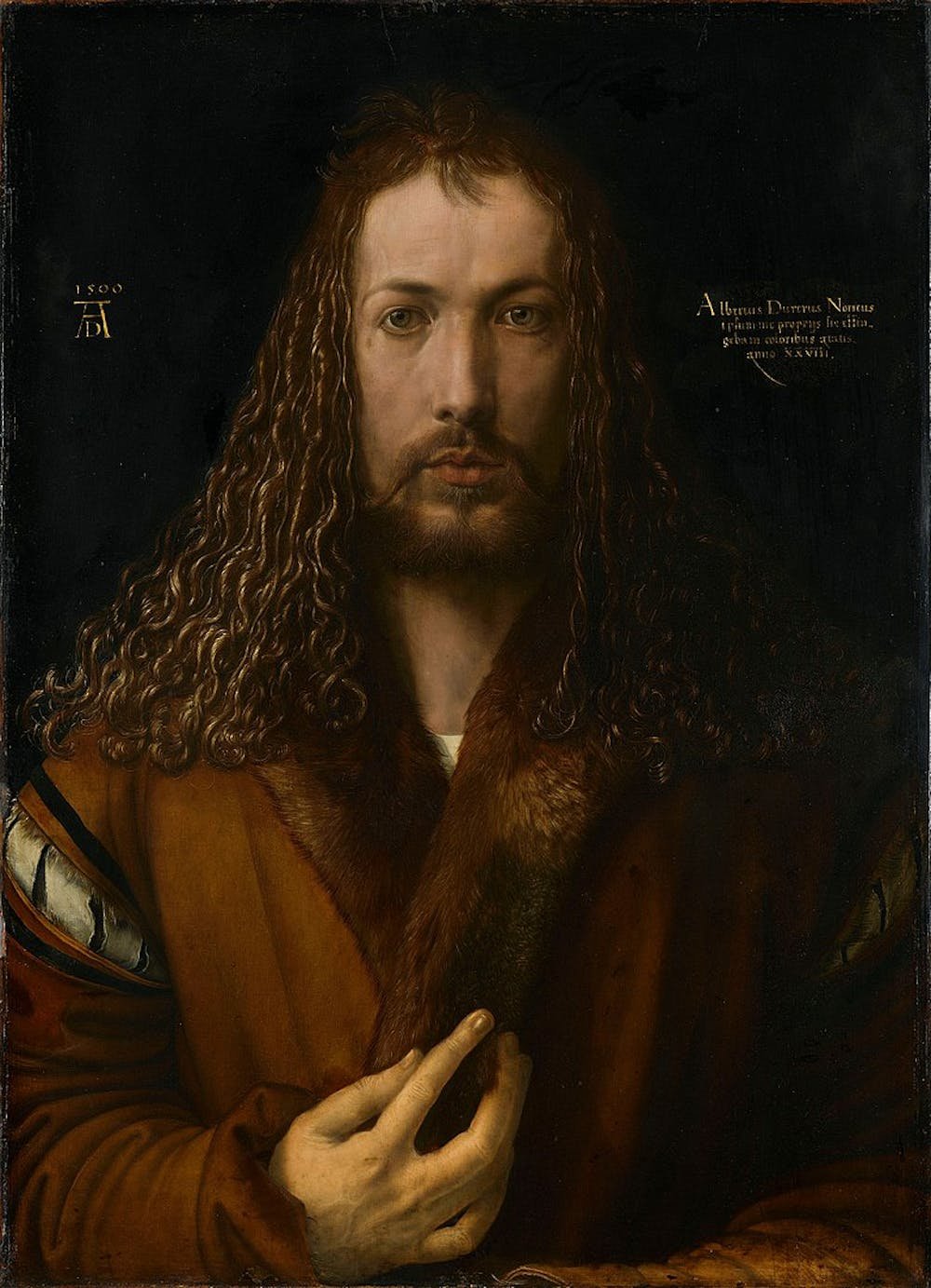 The 16th-century German artist Albrecht Dürer blurred the line between the holy face and his own image in a famous self-portrait of 1500. In this, he posed frontally like an icon, with his beard and luxuriant shoulder-length hair recalling Christ’s. The “AD” monogram could stand equally for “Albrecht Dürer” or “Anno Domini” – “in the year of our Lord.”

This phenomenon was not restricted to Europe: There are 16th- and 17th-century pictures of Jesus with, for example, Ethiopian and Indian features.

In Europe, however, the image of a light-skinned European Christ began to influence other parts of the world through European trade and colonization.

The Italian painter Andrea Mantegna’s “Adoration of the Magi” from A.D. 1505 features three distinct magi, who, according to one contemporary tradition, came from Africa, the Middle East and Asia. They present expensive objects of porcelain, agate and brass that would have been prized imports from China and the Persian and Ottoman empires.

‘Adoration of the Magi.’ Artist Andrea Mantegna. From The J. Paul Getty Museum

But Jesus’ light skin and blue eyes suggest that he is not Middle Eastern but European-born. And the faux-Hebrew script embroidered on Mary’s cuffs and hemline belie a complicated relationship to the Judaism of the Holy Family.

In Mantegna’s Italy, anti-Semitic myths were already prevalent among the majority Christian population, with Jewish people often segregated to their own quarters of major cities.

Artists tried to distance Jesus and his parents from their Jewishness. Even seemingly small attributes like pierced ears – earrings were associated with Jewish women, their removal with a conversion to Christianity – could represent a transition toward the Christianity represented by Jesus.

Much later, anti-Semitic forces in Europe including the Nazis would attempt to divorce Jesus totally from his Judaism in favor of an Aryan stereotype. 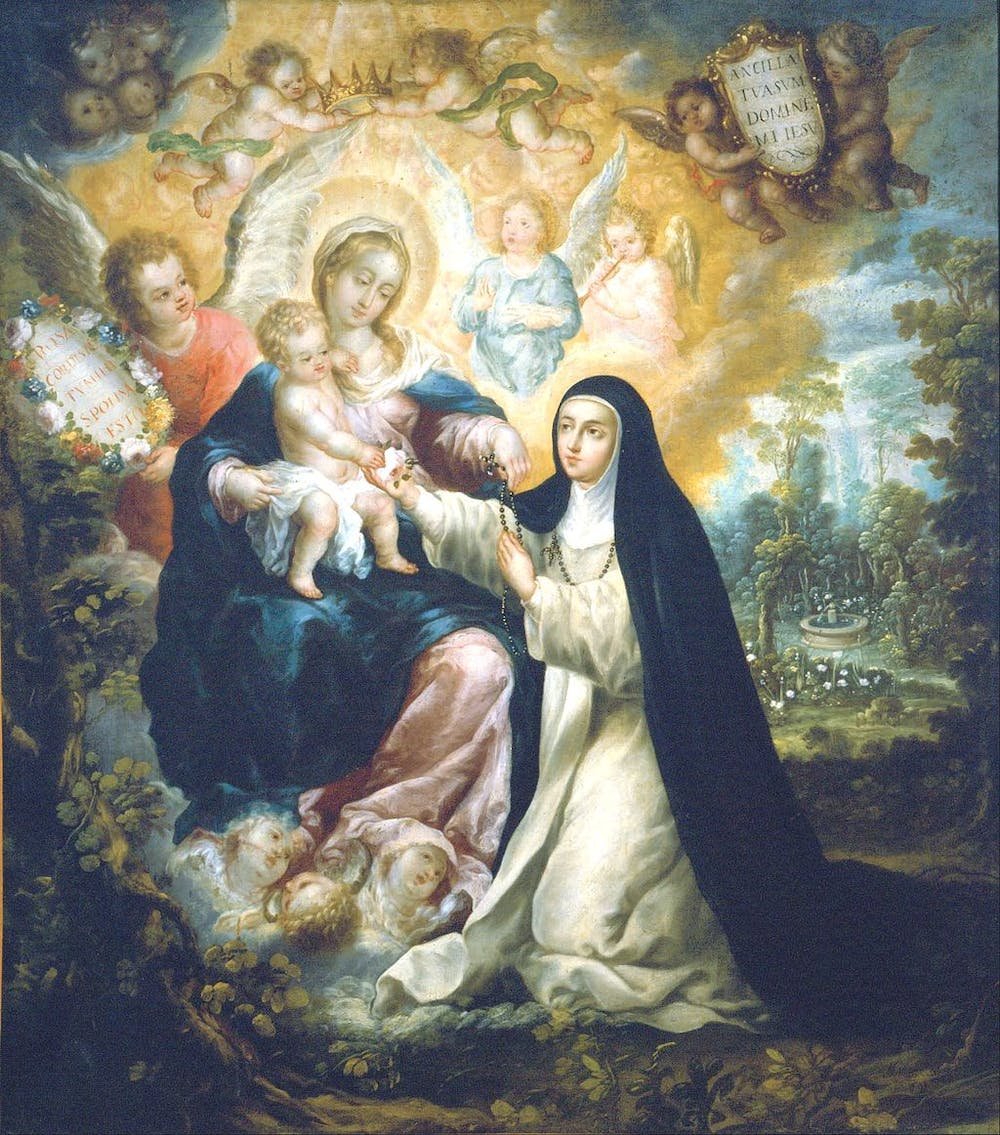 A small altarpiece made in the school of Giovanni Niccolò, the Italian Jesuit who founded the “Seminary of Painters” in Kumamoto, Japan, around 1590, combines a traditional Japanese gilt and mother-of-pearl shrine with a painting of a distinctly white, European Madonna and Child.

Scholar Edward J. Blum and Paul Harvey argue that in the centuries after European colonization of the Americas, the image of a white Christ associated him with the logic of empire and could be used to justify the oppression of Native and African Americans.

In a multiracial but unequal America, there was a disproportionate representation of a white Jesus in the media. It wasn’t only Warner Sallman’s Head of Christ that was depicted widely; a large proportion of actors who have played Jesus on television and film have been white with blue eyes.

Pictures of Jesus historically have served many purposes, from symbolically presenting his power to depicting his actual likeness. But representation matters, and viewers need to understand the complicated history of the images of Christ they consume.

Anna Swartwood House is an Assistant Professor of Art History at the University of South Carolina.