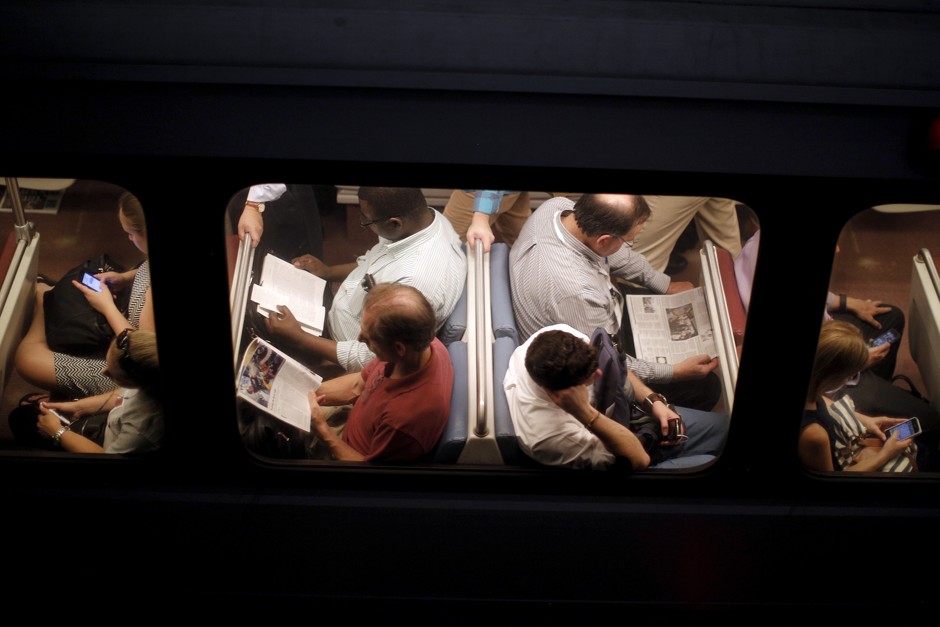 Where we choose to live is arguably the most important decision we’ll ever make. But current research is conflicted as to what makes us happier: urban or suburban life. A set of studies from the sociologist Adam Okulicz-Kozaryn sheds additional light on the relationship between where we live and how happy or unhappy we are.

The first study, co-authored by Joan Maya Mazelis and published in Urban Studies, uses data from the U.S. Centers for Disease Control and Prevention’s 2005 Behavioral Risk Factor Surveillance System to measure happiness across more than 230 counties in the U.S. The study uses statistical analysis to identify the cause of unhappiness in urban, suburban, and rural counties, while controlling for the less desirable aspects of city life such as poverty, crime, and unemployment, and the characteristics of cities themselves (their size, density, and heterogeneity).

The study finds that those living in counties outside metropolitan areas tend to report higher levels of happiness than those living in central cities, by about .05 points on a scale from 1 to 4.

Indeed, the study finds that denser counties tend to have less happy residents, even when controlling for factors like greater crime and poverty. While these variables do weaken the relationship between density and unhappiness, the effect remains negative and significant. This leads the authors to conclude that size and density—what they call “the defining features of cities”—are associated with greater unhappiness. Even if cities were to reduce their levels of crime, poverty, or unemployment, urban residents would still be less happy than those living elsewhere. In this way, the study notes, “cities act like a magnifying glass, bringing out the best and the worst in us.”

In his second study, published in the journal Cities, Okulicz-Kozaryn explores this subject further by determining the tipping point at which a city’s size becomes too big and its residents become unhappy. In this case, the study defines happiness in terms of “subjective wellbeing,” a common definition of happiness, which includes both life satisfaction and one’s mood. Using data from the 1972-2012 U.S. General Social Survey, the study again finds that larger cities are far less happy than smaller ones. As the figure below shows, happiness gradually increases as population size declines. The one notable exception is a sharp decline in happiness in communities of around 5,000-8,000 people. 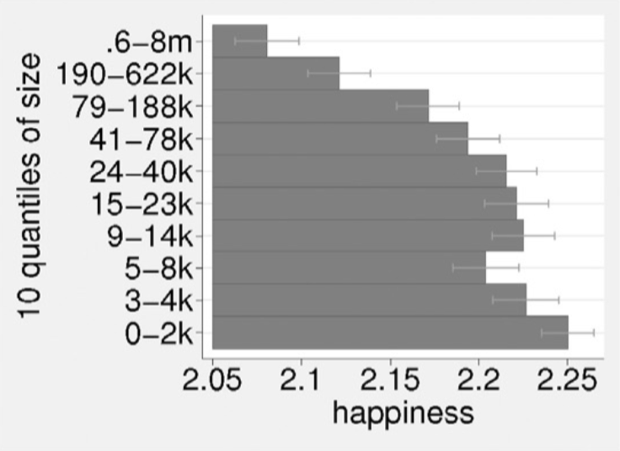 The study finds that unhappiness intensifies once a city’s population reaches hundreds of thousands of people. For the most part, the 60 cities in the U.S. with populations larger than 300,000 are the least happy cities in the country. This leads the study to conclude that “a person does not have to give up city living to be happy, she just needs to avoid the biggest cities.”

Of course, there are certain aspects of city life—crowds, traffic, noise, stress, and higher costs of living—that are likely to make people less happy. Not to mention, urbanites are a self-selecting group: Cities may very well attract the kinds of people who are less likely to be happy in the first place. Although research shows that cities, and especially dense urban neighborhoods, attract people who are creative, innovative, and open to new ideas, they are also more introverted, introspective, and perhaps overly critical. Big, dense urban areas are also home to greater concentrations of neurotic people than suburbs or rural areas. Suburbs and rural areas, by contrast, tend to attract more agreeable and conscientious types who tend to be happier with their lives.

At the end the day, the positive characteristics of cities—their fast-paced life, diversity, greater opportunities, and heightened exchange of skills and knowledge—come at a price. It’s up to individuals to decide which ones are worth the price of happiness.

Richard Florida is a co-founder and editor at large of CityLab and a senior editor at The Atlantic. He is a university professor in the University of Toronto’s School of Cities and Rotman School of Management, and a distinguished fellow at New York University’s Schack Institute of Real Estate and visiting fellow at Florida International University.