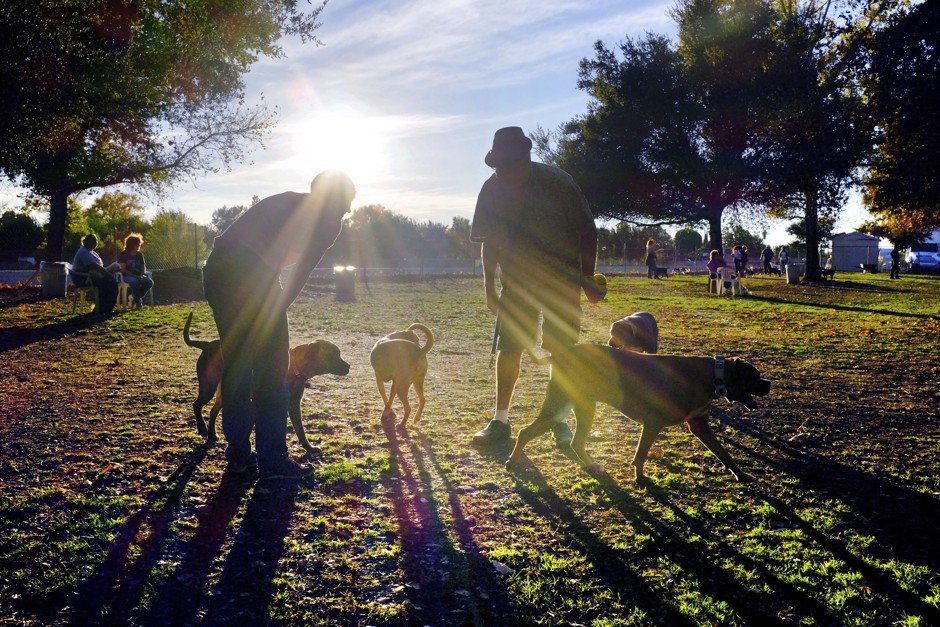 From the thin shade of a pine tree at Laurel Canyon Dog Park, Amber Freeman, a contractor for a local dog-walking company, keeps an eye on her 30 canine charges.

Two other co-workers have met her here to mind the pack, which they’ve picked up from neighborhoods all over Los Angeles. At least six other walking services have set up shop, too, letting dozens of animals frolic, tussle, and snooze in the grassless expanse. In the late morning, just a couple of owners have brought their own dogs.

The ratio of professional to “civilian” isn’t an accident. Freeman, who wears a leather hip holster and a bandana around her neck, doesn’t come here at any other time of day or on the weekends. And she and her colleagues only comes to this park, a four-acre dust bowl tucked beneath mansion-lined Mulholland Drive.

“Most other dog parks in the nice areas are ones we get run out of,” she says. Sometimes families with young kids are wary of the big packs of animals that the walkers bring; more often, Freeman says, local owners get territorial about the neighborhood space they feel is more “theirs.” So she avoids them.

This tension plays out in the park’s many anti-dog walker reviews on Yelp. “I’ve had several instances where dog-walkers have gotten very upset with me because of ‘my dog,’” wrote one user, “and what it comes down to is that I didn't know the rules?”

It’s not surprising that relations between dog walkers and dog owners are fraught: They’re competing for finite real estate. Market research shows dog ownership has skyrocketed some 29 percent nationwide in the past decade, an increase propelled largely by higher-income millennials. As young adult professionals increasingly put off having families, dogs have become “starter children,” as Joshua Stephens wrote in The Atlantic in 2015. With demand growing, cities and developers are building more dog-friendly zones both in response to and in anticipation of more four-legged residents. Off-leash dog parks are growing faster than any other type of park in America's largest cities, with 2,200 counted as of 2010.

And when square footage is at a premium , dog parks are the setting of some of the most contentious fights for public space.

“Cities are places where many millions of dogs live,” says Jennifer Wolch, dean and professor of planning at UC Berkeley’s College of Environmental Design. “In my view, they actually deserve, as residents, space for living their own lives.” 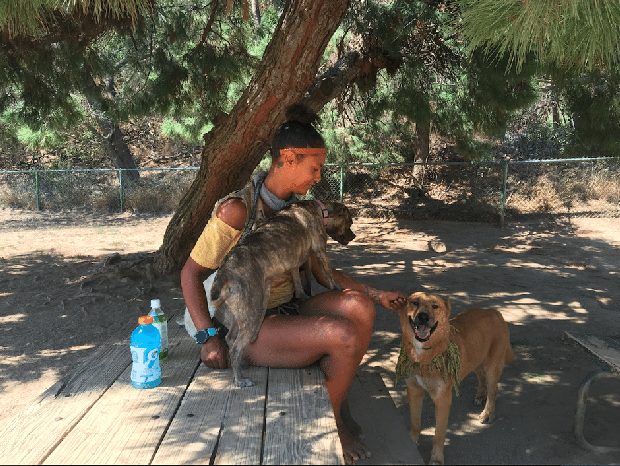 Amber Freeman, an L.A. dog walker, is on the job at Laurel Canyon Dog Park. Photo by CityLab/Laura Bliss.

Wolch, a pioneer in studies centered on urban relationships between people and animals, likes to use the term zoöpolis to help planners envision a multi-species city, where the needs of animals are incorporated more fully. Dog parks, in her view, are just another kind of civic infrastructure to accommodate a need—for furry citizens to roam and exercise, socialize and play. For owners, too, her research has shown dog parks to be important social mixing grounds, rare opportunities for people from different neighborhoods and backgrounds who wouldn’t otherwise meet to relate and bond through the avatars of their pets.

Laurel Canyon Dog Park, where Freeman and her fellow walkers roam, was L.A.’s very first: It opened in 1991 and was the subject of one of Wolch’s early studies. In it, she charted the transformation of the tucked-away space from a graffitied drug market to a cleaned-up space for romping pets, driven by a group of neighborhood activists.

It only took a few years for its popularity to explode. As of 2017, six more public off-leash parks have popped up in places like West Hollywood, Barrington Avenue, and Griffith Park. But on weekends dog owners still park their cars a mile away to come to Laurel Canyon’s dog park. Tour buses full of celebrity gawkers come by to see if Robert Pattinson is out giving his his scruffy terrier some air.

Chuck Kaufman, who was playing with his cocker spaniel, Kelly, on Thursday, has been coming to the park from his home in Studio City for nine years. He’s befriended a number of the dog walkers; it’s his social outlet. Many homeowners along Mulholland Drive don’t share his affections. “Would you want a public park drawing people from all over in your backyard?” he asks. “There’s not a neighbor here who likes it, at this point.”

Resistance to dog parks takes on a different tenor when animals seem to displace humans in housing-crunched cities. New dog owners are disproportionately younger and whiter than the residents of the cities they move into, and that has real estate implications: For one third of Americans aged 18 to 36 who’d purchased a first home, finding better space for a dog was the primary motivator, according to a SunTrust Mortgage poll. When young, white, affluent dog owners snap up properties in historically lower-income neighborhoods of color—and start advocating for amenities like dog parks, which can bump up property values further—the optics are complicated.

Take the uproar in Philadelphia’s fast-gentrifying Point Breeze neighborhood, where the number of dog licenses increased sixfold from 2012 to 2015. Scant green space is available to the historically black neighborhood, and one that does exist—Wharton Square Playground—is off-limits to dogs. As the Philadelphia Inquirerreported, a push among new residents to convert a “currently inoperable, fenced-in tennis court” into a dog park was killed after longtime residents balked at what they saw as less room for their kids to play—and another encroachment by newcomers.

“People have been living here over 100 years and had a playground; now people want to come in new and change things. It didn’t seem right,” Alex Brown, a longtime Point Breeze resident and dog owner himself, told the Inquirer . “Go ahead, walk your dogs, but it just wasn’t right for people to think they could just come in and take over.”

The bone of contention is bigger than the park itself, Brown acknowledged, as did the park’s supporters. It’s about who calls the shots in a neighborhood undergoing change, and whose access to recreation and fun matters most: the kids of longtime residents, or the pets of white newcomers? Similar tensions have underpinned dog parks proposed or built in Washington, D.C., Kansas City, Durham, North Carolina, and others.

But Wolch says while the challenges of gentrification can’t be discounted, nobody wins when the discourse around dog parks is about kids-versus-pups. “If you make dog parks a villain of gentrification, you’re saying to people that live in these communities who are not gentrifiers that their dogs don’t deserve a place to play,” she says. “It’s kind of an unacceptable position. Everyone you share a city with has to has some ethical consideration.”

Consider that at the time of this article's publication, on Chicago’s predominantly black South Side, there’s not a single designated dog park, despite the efforts of local dog-owners and city aldermen. To address the needs of lower-income communities like this—as well as gentrifying ones—planners should approach dog parks as they do any other, says Wolch: listen to, and account for, their needs in an ingenuous way. To mitigate the displacement effects of a property value pick-up, affordable housing solutions should come to the dog-park planning table, too.

How to manage public space where the conflict is over its use, more than the park itself? From the city planner’s point of view, Laurel Canyon Dog Park, a peculiar crossroads for L.A. dogs nestled among mansions, may be an argument for stronger enforcement, and expansion, of park regulations. (There are supposed to be no more than three dogs allowed per person.) Other cities require professional dog-walking services to acquire specialized permits as a way to manage safety concerns and the significant wear-and-tear they place on public parks. Los Angeles city council members considered such a scheme years ago but dropped it. It might be high time to return to the permit idea, as more companies turn a profit in tax dollar-funded space.

Until then, walkers like Freeman will serve a growing number of L.A. dogs whose owners can’t walk them, or choose not to. She wishes some of the people she butts heads with at the park were more sympathetic to the needs of those animals. “If we didn’t do this, some of them would be locked in a bathroom for ten or twelve hours,” she says. “Sharing is caring. These dogs have to get out, too.”

Laura Bliss is CityLab’s west coast bureau chief, covering transportation and technology. She also authors MapLab, a biweekly newsletter about maps. Her work has appeared in the New York Times, The Atlantic, Los Angeles magazine, and beyond.