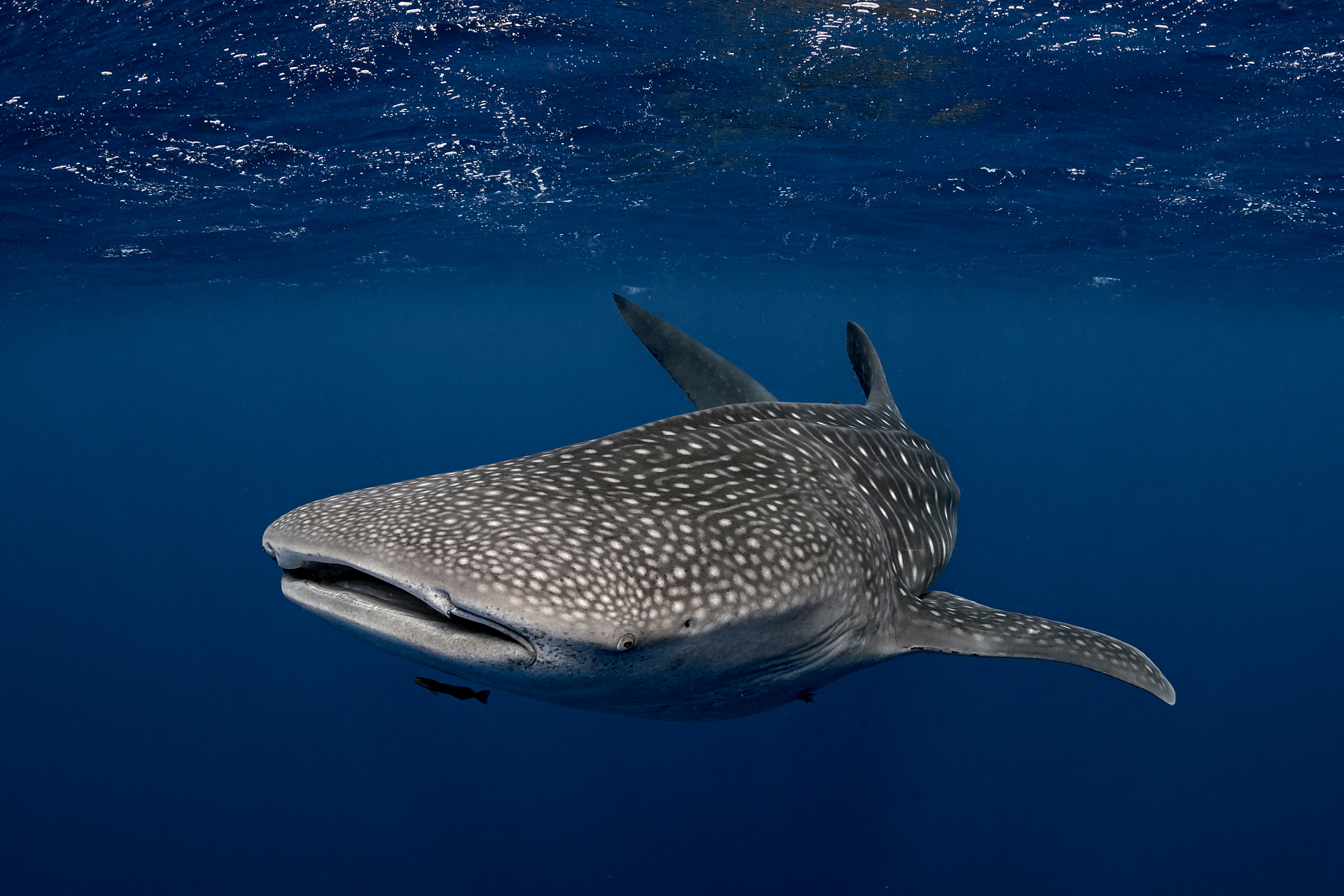 Covered in polka dots and stretching the length of a single-decker bus, the gentle giant barrelled towards them. The team of scientists, ready with a 17kg waterproof ultrasound machine they had lugged to one of the world’s most isolated dives sites, waited for the whale shark.

Months of preparation had gone into the encounter, expected to last between 30 and 45 seconds. Aided into position by a propeller mounted on his air tank, one scientist glided underneath the hulking animal as it swam by, raking a handheld probe across her distended belly – yielding the world’s first ultrasound of a wild whale shark.

The ultrasounds, carried out in 2018 on three females off the Galápagos Islands, were aimed at teasing apart one of the ocean’s greatest mysteries: decades after research began in earnest on whale sharks, scientists have few clues as to how they mate or where they give birth.

“Here is the biggest fish in the oceans, it’s almost certainly the biggest shark,” says Jonathan R Green, the director of the Galapagos Whale Shark Project. “And what is known about their reproductive behaviour is almost nothing.”

For more than 70m years, some form of the whale shark has roamed the oceans, their existence overlapping with the Tyrannosaurus rex at one point. A docile filter-feeder, the whale shark challenges the stereotype of sharks as giant, toothy predators. Its 300 of rows of teeth are microscopic, it moves through the water at a relatively plodding pace and has been known to allow phalanxes of other fish to hitch a ride.

Still, whale sharks have proven to be just as headline-grabbing as their fearsome relatives. Researchers in Japan recently discovered that they have retractable eyes, with the eye surface around the iris covered in nearly 3,000 tiny tooth-like structures known as “dermal denticles”, while another research team documented thousands of shrimp-like creatures living in the mouth of one whale shark.

“There are few things today on our planet that you can say, ‘that is absolutely new to science, we didn’t know that before’,” says Green. “So it’s a bit like the discovery of gravity – it’s an exciting field to work in, but it can be frustrating too.”

Green and his team carried out the ultrasounds after noticing that the whale sharks that gather off the Galápagos were nearly all females with swollen bellies, in contrast to the large gatherings of mostly juvenile males in coastal regions around the world.

While the ultrasounds didn’t confirm the whale sharks were pregnant, they did reveal ovaries and what appeared to be unfertilised eggs, hinting that more research is needed to untangle the significance of the area to whale shark reproduction.

Green and his team also tagged several of the animals, only to find out that they often dive beyond the 2,000-metre range of the tags. He and his team have been at pains to explain this “spiralling behaviour”, as the deep water dives seemingly confer little advantage in escaping predators, birthing pups or finding the plankton that whale sharks mostly feed on.

“So it’s layer upon layer of mystery that we’re trying to peel our way through,” says Green. “And every time we come up with some kind of significant data, it just begs a whole series of new questions.”

These questions have taken on new urgency in recent years. “Every day there are fewer of them,” says Green. “We’re losing these animals at a rate which is unprecedented in the history of planet Earth, perhaps with the exception of the Cretaceous-Tertiary K-T mass extinction, when the dinosaurs were wiped out.”

Whale sharks were listed as endangered in 2016, their survival imperilled by fisheries, where they turn up as by-catch, and the demand for shark fins in Asia – with a single pectoral fin able to net as much as $20,000 (£16,000).

The search for answers, however, has in part been stymied by the technical challenges of tracking an animal that ranks among the ocean’s most widely travelled, shifting between open ocean, coastal areas and the deep sea. A 2018 study on a whale shark named Anne saw her travel more than 12,500 miles across the Pacific over the span of two years and three months, at one point making her way to the Mariana Trench – the deepest place on Earth.

The glaring gaps in our knowledge about the world’s biggest fish, however, also reflect our priorities as a society, says Green. “We’ve literally shown more interest in exploring outer space than we have the depths of our oceans.”

Scientists are now locked in a race against time. “How can you have an informed conservation plan for an animal if you don’t know how, when or where it breeds?” asked Alistair Dove, the vice-president of research and conservation at the Georgia Aquarium in Atlanta, US. The aquarium is home to four juvenile whale sharks that have yet to reach sexual maturity.

In the wild, once whale sharks are born, little is known about the first years of their lives, he says. “There’s a sort of lost years period, between when they’re born at about 45–60cm long, until they’re up to about 3–4 metres long. That period in between there, we don’t know where they are.”

Tantalising clues have turned up around the world. A pregnant female harpooned by a commercial fishing vessel in Taiwan in 1995 was found to be carrying more than 300 pups in different stages of development. Analyses carried out years later allowed researchers to determine that 29 pups still remaining from the litter all had the same father, suggesting whale sharks mate once, store the sperm and fertilise their own eggs as needed, says Jennifer Schmidt, the director of science and research for the Shark Research Institute.

A 2019 video, shot by a pilot flying over the Ningaloo reef in Western Australia, showed an adult male whale shark swimming erratically, zigzagging through the water as it seemingly vied for the attention of a nearby female. Then it flipped upside down, underneath the female, brandishing his two claspers – the name given to the male’s penis-like organs. While some celebrated the video as a mating act caught on camera, it’s clear that the female was too young to breed, says Schmidt.

“You’ve got a juvenile with an adult – it could be some sort of mating play behaviour, some sort of practice, but it’s not a bona fide mating event because one of the sharks is not old enough to be reproductive,” she added.

Over the years, two eyewitness reports of mating have been documented, both of them from the far-flung island of St Helena in the south Atlantic. Unaware of each other’s reports, two men described the same ritual: splashing that gave way to the male and female in vertical positions – belly to belly – before the female ended up on top and the male slipped underneath her.

The reports were bolstered by the fact that the waters off the volcanic island are one of the few places in the world where adult male and female whale sharks have been spotted in equal numbers.

“I have no doubt they both saw whale shark mating,” says Dove of the Georgia Aquarium, who travelled to St Helena after hearing of the reports. “We just don’t have that thing that everybody expects in the 21st century, which is if you didn’t get it on video, it didn’t happen.”

In the absence of hard evidence, he and other scientists are pushing forward, determined to uncover the secrets that have surrounded whale sharks for millions of years. “The ocean holds on to her secrets pretty tightly,” says Dove.

“It’s frustrating to me, as a marine biologist, that we can have this enormous animal and know so little about it,” he adds. “The whale shark is now endangered. And we can’t expect to pull it back from that situation if we don’t understand how that life history works.”

Ashifa Kassam is the Guardian's former Spain and Canada correspondent.