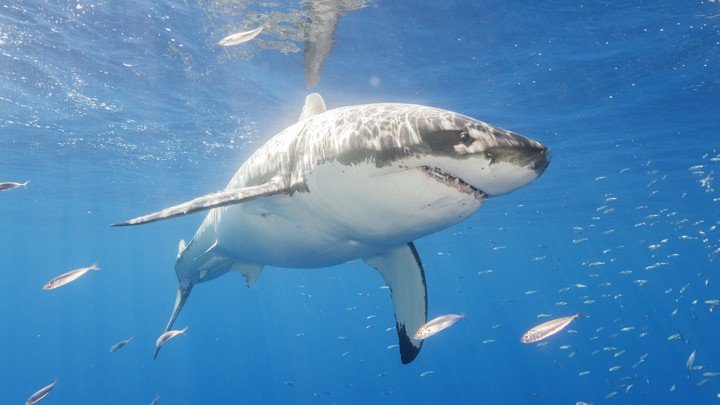 Even a predator like the great white shark can have a fearsome enemy. Photo by Dave J Hogan / Getty Images.

The great white shark—a fast, powerful, 16-foot-long torpedo that’s armed to the teeth with teeth—has little to fear except fear itself. But also: killer whales.

For almost 15 years, Salvador Jorgensen from the Monterey Bay Aquarium has been studying great white sharks off the coast of California. He and his colleagues would lure the predators to their boats using bits of old carpet that they had cut in the shape of a seal. When the sharks approached, the team would shoot them with electronic tags that periodically emit ultrasonic signals. Underwater receivers, moored throughout Californian waters, detected these signals as the sharks swam by, allowing the team to track their whereabouts over time.

In 2009, the team tagged 17 great whites, which spent months circling Southeast Farallon Island and picking off the local elephant seals. But this period of steady hunting ended on November 2 of that year, when two pods of killer whales (orcas) swam past the islands in the early afternoon. In the space of eight hours, all 17 great whites abruptly disappeared. They weren’t dead; their tags were eventually detected in distant waters. They had just fled from Farallon. And for at least a month, most of them didn’t return.

Jorgensen wondered if this was a one-off, but the tags recorded similar examples in later years—orcas arrive, and sharks skedaddle. Some orcas also hunt seals, so it’s possible that the sharks are just trying to avoid competition—but that seems improbable, given how quickly they bolt. The more likely explanation is that the most fearsome shark in the world is terrified of orcas.

Killer whales have a friendlier image than great white sharks. (Perhaps because of their respective portrayals in movies: Jaws 2 even begins with the beached carcass of a half-eaten orca.) But orcas are “potentially the more dangerous predator,” says Toby Daly-Engel, a shark expert at the Florida Institute of Technology. “They have a lot of social behaviors that sharks do not, which allows them to hunt effectively in groups, communicate among themselves, and teach their young.”

Combining both brains and brawn, orcas have been known to kill sharks in surprisingly complicated ways. Some will drive their prey to the surface and then karate chop them with overhead tail swipes. Others seem to have worked out that they can hold sharks upside-down to induce a paralytic state called tonic immobility. Orcas can kill the fastest species (makos) and the largest (whale sharks). And when they encounter great whites, a few recorded cases suggest that these encounters end very badly for the sharks.

In October 1997, fishing vessels near Southeast Farallon Island observed a young white shark interrupting a pair of orcas that were eating a sea lion. One of the whales rammed and killed the shark, and the duo proceeded to eat its liver. More recently, after orcas passed by a South African beach, five great-white carcasses washed ashore. All were, suspiciously, missing their liver.

A great white’s liver can account for a quarter of its body weight, and is even richer in fats and oils than whale blubber. It’s “one of the densest sources of calories you can find in the ocean,” Jorgensen says. “The orcas know their business, and they know where that organ lies.”

Rather than ripping their prey apart, it seems that orcas can extract livers with surprising finesse, despite lacking arms and hands. No one has observed their technique, but the wounds on otherwise intact carcasses suggest that they bite their victims near their pectoral fins and then squeeze the liver out through the wounds. “It’s like squeezing toothpaste,” Jorgensen says.

An orca, then, is an apex predator’s apex predator. No wonder sharks flee from them. But orcas don’t actually have to kill any great whites to drive them away. Their mere presence—and most likely their scent—is enough. Many predators have similar effects. Their sounds and smells create a “landscape of fear”—a simmering dread that changes the behavior and whereabouts of their prey. The presence of tiger sharks forces dugongs into deeper waters, where food is scarcer but cover is thicker. The mere sound of dogs can keep raccoons off a beach, changing the community of animals that lives in the tide pools.

The fear of death can shape the behavior of animals more than death itself. “Lions, for example, do not eat a lot of impala, but impala fear lions more than any other predator on the landscape except humans,” says Liana Zanette from Western University in Canada, who studies landscapes of fear. Similarly, killer whales don’t have to kill many white sharks to radically change their whereabouts. In 2009, for example, orcas passed by Southeast Farallon for less than three hours, but the great whites stayed away for the rest of the year. For the elephant seals, the island became a predator-free zone. “The two predators faced off, and the winners were the seals,” Jorgensen says.

And what about the sharks? “They had to move to find a new food source when the killer whales ruined the neighborhood,” Zanette says. “This could interfere with their ability to successfully migrate, which requires a bulk-up of fat and nutrients.”

“We think of white sharks as these great ocean predators, but their bag of tricks includes knowing when to pack it in,” Jorgensen says. “That play might have contributed to their long-standing success.”