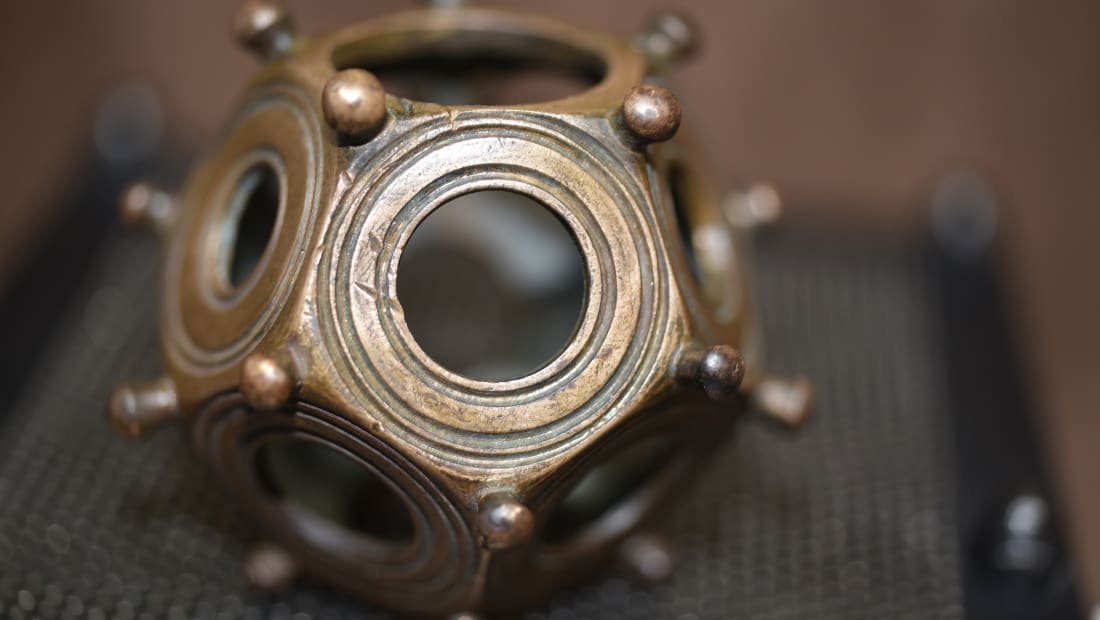 One August day in 1987, Brian Campbell was refilling the hole left by a tree stump in his yard in Romford, East London, when his shovel struck something metal. He leaned down and pulled the object from the soil, wondering at its strange shape. The object was small—smaller than a tennis ball—and caked with heavy clay. “My first impressions," Campbell tells Mental Floss, "were it was beautifully and skillfully made … probably by a blacksmith as a measuring tool of sorts.”

Campbell placed the artifact on his kitchen windowsill, where it sat for the next 10 or so years. Then, he visited the Roman fort and archaeological park in Saalburg, Germany—and there, in a glass display case, was an almost identical object. He realized that his garden surprise was a Roman dodecahedron: a 12-sided metal mystery that has baffled archaeologists for centuries. Although dozens, and perhaps hundreds, of explanations have been offered to account for the dodecahedrons, no one is certain just what they were used for.

The first Roman dodecahedron to intrigue archaeologists was found almost 300 years ago, buried in a field in the English countryside along with some ancient coins. "A piece of mixed metal, or ancient brass, consisting of 12 equal sides," read the description of the egg-sized object when it was presented to the Society of Antiquaries in London in 1739. The 12 faces had "an equal number of perforations within them, all of unequal diameters, but opposite to one another … every faceing had a knobb or little ball fixed to it." The antiquarians were flummoxed by the finely crafted metal shell, and what its purpose may have been.

The 1739 dodecahedron was far from the last discovery of its kind. More than 100 similar objects have since been found at dozens of sites across northern Europe dating to around the 1st to 5th centuries CE. Ranging in size from about a golf ball to a bit larger than a baseball, each one has 12 equally sized faces, and each face has a hole of varying diameter. The objects themselves are all hollow.

By the mid-19th century, as more were found, the objects became known to archaeologists as dodecahedrons, from the Greek for “12 faces.” They're on display today in dozens of museums and archaeological collections throughout Europe, although given how little is known about them, their explanatory labels tend to be brief.

What's more, they have no paper trail. Historians have found no written documentation of the dodecahedrons in any historical sources. That void has encouraged dozens of competing, and sometimes colorful, theories about their purpose, from military banner ornaments to candleholders to props used in magic spells. The obvious craftsmanship that went into them—at a time when metal objects were expensive and difficult to make—has prompted many researchers to argue they were valuable, an idea that's supported by the fact that several have been found stashed away with Roman-era coins. But that still doesn't explain why they were made.

In the 19th century, some antiquarians favored the theory that the dodecahedrons were a type of weapon—perhaps the head of a mace (a type of club with a heavy head), or a metal bullet for a hand-held sling. But as other scholars later pointed out, even the largest of the dodecahedrons are too light to inflict much damage. Moreover, Roman soldiers usually fired solid lead balls from their slings—nothing that looked like the intricate, and hollow, dodecahedrons.

Yet weapons aren't the only items useful in a war. Amelia Sparavigna, a physicist at Italy’s Politecnico di Torino, thinks the dodecahedrons were used by the Roman military as a type of rangefinder. In research published on the online repository arXiv in 2012, Sparavigna argued that they could have been used to calculate the distance to an object of known size (such as a military banner or an artillery weapon) by looking through pairs of the dodecahedrons' differently sized holes, until the object and the edges of the two circles in the dodecahedron aligned. Theoretically, only one set of holes for a given distance would line up, according to Sparavigna.

The theory is strengthened by the fact that several of the dodecahedrons have been found at Roman military sites. Sparavigna tells Mental Floss that “the small little studs [on the outside allow for] a good grip of the object. So an expert soldier could use it in any condition,” while the many pairs of holes allowed them to quickly select between a variety of ranges. “The Roman army needed a rangefinder, and the dodecahedron can be used as a rangefinder,” she explains.

But many modern scholars disagree. Historian Tibor Grüll of the University of Pécs in Hungary, who reviewed the academic literature about the dodecahedrons in 2016, points out that no two Roman dodecahedrons are the same size, and none have any numerals or letters engraved on them—markings you might expect on a mathematical instrument. “In my opinion, the practical function of this object can be excluded because ... none of the items have any inscriptions or signs on [them],” Grüll tells Mental Floss.

He points to the distribution of the objects as an important clue. They have been found across a northwestern swath of the former Roman Empire from Hungary to northern England, but not in other Roman territories such as Italy, Spain, North Africa, or the Middle East. That lack works against the idea that the objects were military devices. "If it was a tool for ranging artillery," Grull says, "why does it not appear all over the empire in a military context?"

Perhaps the dodecahedrons were used for play, not war. Some scholars have suggested they may have been part of a child’s toy, like the French cup-and-ball game known as bilboquet, which dates from the Middle Ages. Their shape also invites comparisons to the dice used for gambling, a common pastime in the Roman era. But most Roman dice were six-sided, smaller, and carved from solid wood, stone, or ivory. Plus, the differently sized holes on each face of the dodecahedrons makes them useless as dice: One side is always heavier than the other, so they always fall the same way.

Many scholars have suggested that the items had a special cultural significance, and perhaps even a religious function, for the peoples in the formerly Gallic regions of northern Europe. The 1939 discovery of a well-preserved bronze dodecahedron in Krefeld, near Germany’s border with the Netherlands, lends credence to this idea. The object was found in the 4th-century CE grave of a wealthy woman, along with the remains of a bone staff. According to an essay from the Gallo-Roman Museum at Tongeren in Belgium, the dodecahedron was likely mounted on the staff like a kind of scepter head, and "probably ascribed with magical powers, bestowing religious power and prestige on its owner."

Or perhaps they had a different kind of cultural significance. Divination or fortune-telling was popular throughout the Roman empire, and the 12 sides of the dodecahedrons could suggest a link to the astrological zodiac. Others have suggested a link to Plato, who said that the dodecahedron was the shape “used for embroidering the constellations on the whole heaven.” (It's not quite clear exactly what Plato was talking about.)

Rüdiger Schwarz, an archaeologist at the Saalburg Roman Archaeological Park near Frankfurt in Germany—where Campbell first identified the curious object he'd found—explains that any discussion of the cultural significance of the objects is purely speculative. “We have no sources from antiquity which give an explanation of the function or the meaning of these objects,” Schwarz says. “Any of these theories may be true, but can neither be proved right or wrong.”

Schwarz points to another theory: The dodecahedrons may have been a type of “masterpiece” to show off a craftsman's metalworking abilities. This might be why they rarely show any signs of wear. “In this respect, the technical function of the dodecahedron is not the crucial point. It is the quality and accuracy of the work piece that is astonishing,” he tells Mental Floss. “One could imagine that a Roman bronze caster had to show his ability by manufacturing a dodecahedron in order to achieve a certain status.”

Soldiers in the Backyard

Of course, the internet loves an ancient mystery, and ideas about the purpose of the Roman dodecahedrons have flourished there. The work of Dutch researcher G.M.C. Wagemans, detailed at romandodecahedron.com, proposes that the objects were astronomical instruments used to calculate agriculturally important dates in the spring and fall by measuring the angle of sunlight through the different pairs of holes. Other internet researchers, perhaps less seriously, have used 3D-printed models of the Roman dodecahedrons for knitting experiments, and suggested that the true purpose of the objects was to create differently sized fingers for Roman woolen gloves.

Campbell has taken his artifact to several museums in London, but beyond confirming what it is, they could provide no further clues about its particular origin or purpose. "Many [is] the time I have handled it wondering as to its exact use," he says.

While Campbell has no clear idea what the Romans were doing with the dodecahedron—which he now keeps in a display cabinet in his house—he does propose how it might have come to be in his garden: by being left behind by soldiers traveling between London and the early Roman provincial capital of Camulodunum, now Colchester in Essex. Romford was at that time a river crossing and the probable site of a fortified posting station used by Roman troops for changing horses and resting in safety.

“Two thousand years ago, I believe this area was forested and the River Rom's flood plain was much wider than today,” Campbell says. “I often form a picture in my head of 100 or so Roman soldiers in full uniform bedding down in the area, now the bottom of my garden.”

Roman dodecahedrons are still being found today. Recent examples have been unearthed by metal-detectorists in the north of England, and by archaeologists excavating a late-Roman rubbish pit in the north of France [ PDF]. It's likely more will be found in the future.

But unless someone also finds an instruction manual—and after more than 1500 years, that seems doubtful—the Roman dodecahedrons will continue to baffle, and fascinate, for many years to come.

Tom Metcalfe is a journalist and writer based in London in the UK.