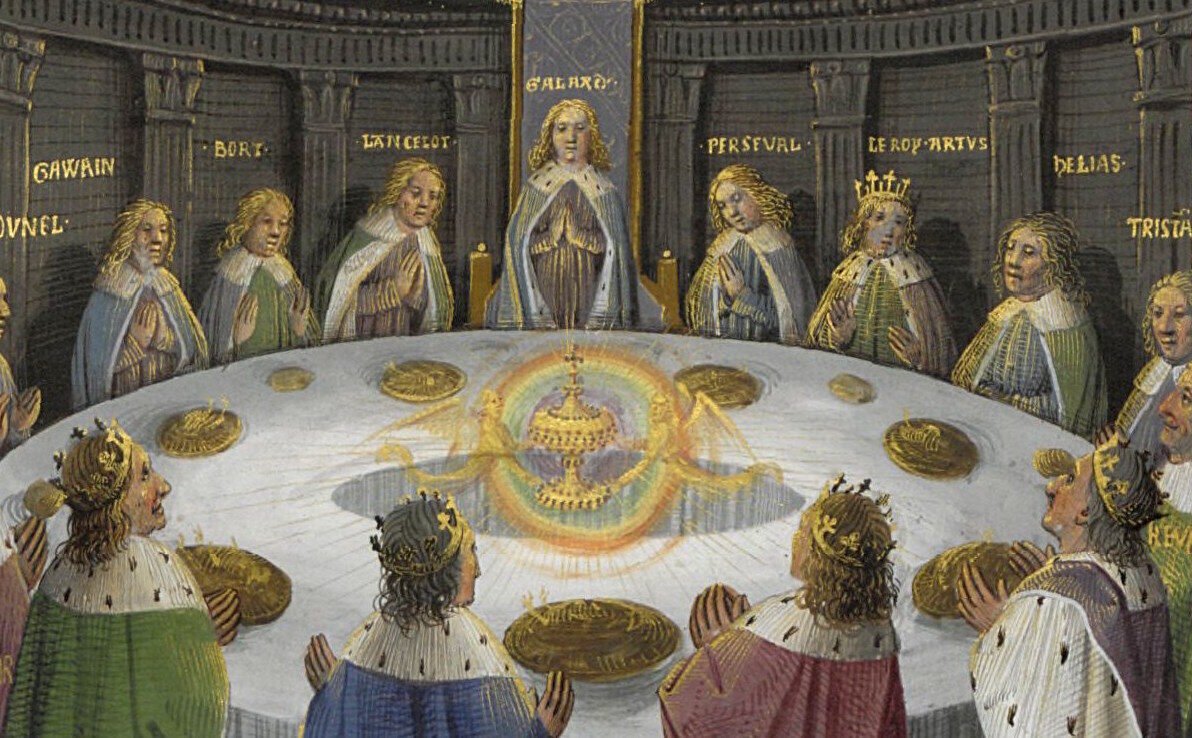 Depiction of King Arthur's knights seeing a vision of the Holy Grailgathered at the Round Table. Evrard d'Espinques/Public Domain.

The first of many myths involving a divine grail was written more than eight centuries ago. People have been fascinated with the potential whereabouts of the holy treasure every since, making it one of history’s most enduring legends. As the stories evolved and fractured over time, the lure of the Holy Grail persisted and expanded, muddying historical events with religious beliefs, Arthurian literature, wild conspiracy theories, and pop culture epics.

While the Holy Grail is generally thought of as mythology, some believe the vessel is a real object that still exists today. The question is, where?

There’s no way to know the answer to that age-old curiosity, especially since there’s no consensus on what the Holy Grail even is. The sacred object has variously been described as a vessel, dish, chalice, golden bowl, platter, and silver basin, imbued in Celtic myths with miraculous powers. Some camps define it as the cup that was used to collect the blood and sweat of Christ during the Crucifixion. More often it’s conflated with the Holy Chalice used to serve the wine at the Last Supper.

Over the centuries there have been copious religious treasures claimed to be some form of the coveted grail, from the time of the Crusades, when such holy relics were a highly lucrative trade, up to present day, when even a rumored trace of the famous cup can attract grail-seeking tourists to a locale. One of the most popular stops on the grail hunt today is Spain’s Valencia Cathedral, which displays an ancient relic that historians and treasure hunters alike believe to be the most likely contender for the Holy Grail, if it does indeed exist. 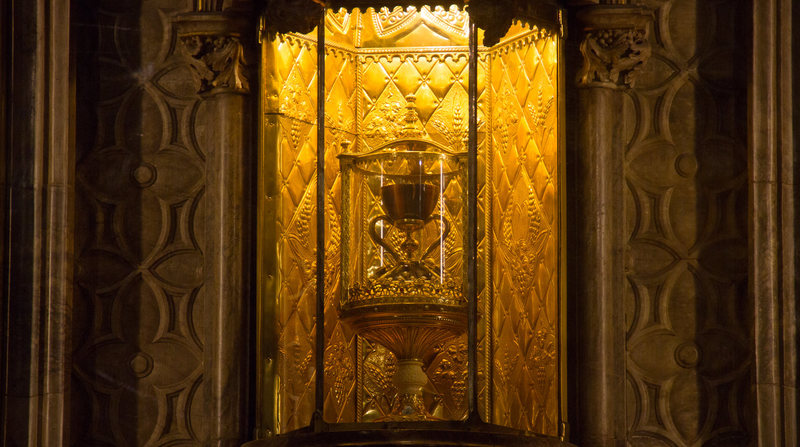 The “Holy Grail” at Valencia Chapel. CucombreLibre/CC BY 2.0.

Kept in the golden Chapel of the Holy Grail and guarded behind glass, the Valencia Chalice doesn’t look like something from the first century. The holy part is specifically the cup at the top, carved from a chocolatey-red agate. (The base, handles, and jewels were added centuries later to add a medieval flare).

In this theory, the holy cup used at Christ’s Last Supper was taken by Saint Peter to Rome, and some time later by a Vatican soldier to Spain, where it landed in Valencia’s Gothic cathedral. This possible history is based less on literary tales and more on archaeological authenticity: The chalice was carbon-dated to the period between the third century BC and second century AD, and manufactured in the Middle East, making it possible it could have been in the possession of Jesus and his disciples.

Before the cup made it to Valencia, however, it had a stop-off at the ancient monastery of San Juan de la Peña, “Saint John of the Cliff”. 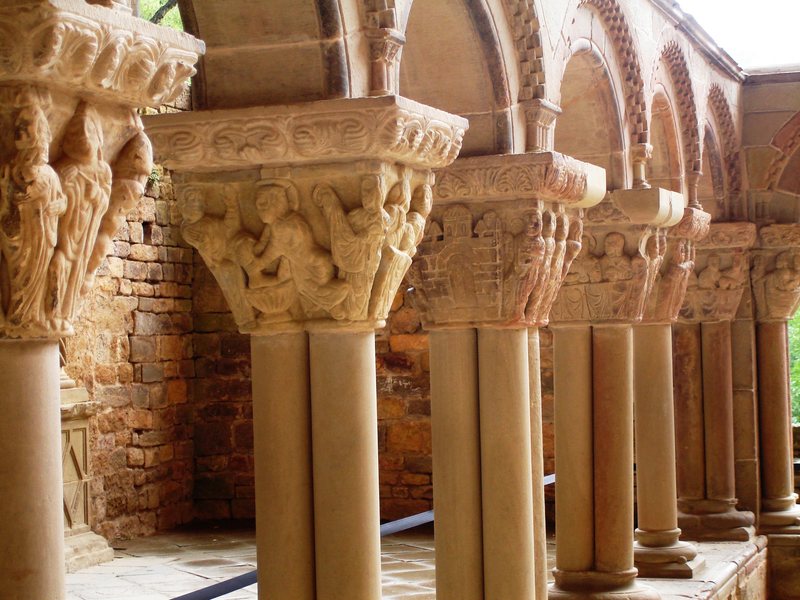 Built between 920 and 1190 CE, the highly fortified monastery has remained one of the safest, most secure places to store booty of any sort for well over a millennium, due in no small part to the extremely inconvenient cliffside the structures were built directly into. The story holds that the Roman soldier that acquired the Holy Chalice took it to Spain where it was hidden at this monastery to protect it from an upcoming Moorish invasion.

Yet another school of thought as to the Holy Grail’s whereabouts stems from medieval literature, most famously the tales of King Arthur and his valiant Knights of the Round Table.

The first literary mention of a wondrous grail was by the poet Chrétien de Troyes in the late 12th century. But it became connected to Christianity, and thus holy, in a slightly later legend by Robert de Boron, which centers around Joseph of Arimathea, the disciple said to have collected the blood and sweat of Christ on the cross before burying him in Joseph’s own tomb.

This is the story that first equated the grail and the Last Supper chalice, which Joseph is said to have taken to Glastonbury, where he established the first Christian church in Britain. De Boron’s legend was incorporated into the Arthurian romances (the Knights’ Round Table was modeled after the Grail Table that Joseph built in remembrance of the Last Supper) and elaborated on.

According to the tales, Joseph hid the grail in a secret place at Chalice Well, an ancient spring at the foot of Glastonbury Tor. Some believe the red color of the water that flows from the well, also known as the Red Spring, represents either the blood of Christ or the rusty iron nails used at the Crucifixion. 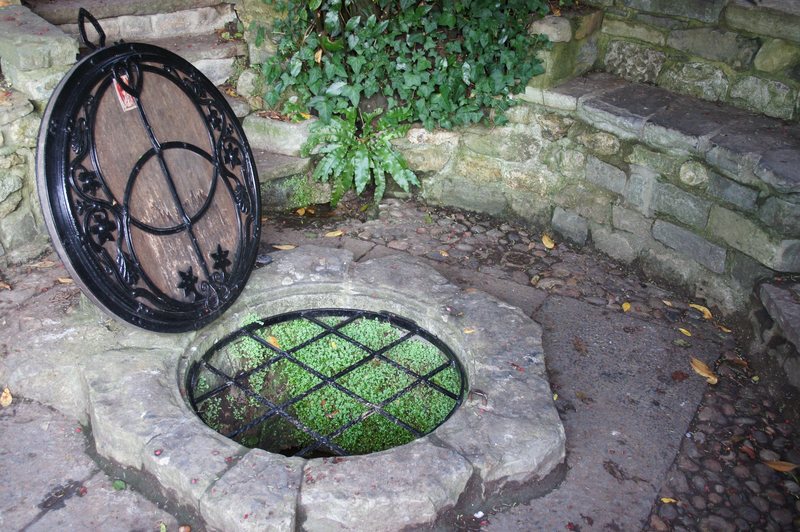 Throughout the Middle Ages, myth and reality started to blur as the grail romances were repeated as historical fact. Today, Glastonbury’s history is steeped in legend. The Tor itself is sometimes claimed to be the mythical Avalon, and the burial site of King Arthur and his Queen Guinevere, though some archaeologists say this latter claim was created by the abbey monks in the 12th century after a financial crisis.

The fascination with questing for the elusive grail took hold in the Arthurian legends, with heroes like Lancelot and Galahad traveling around Britain in search of the holy cup at the mysterious “Grail Castle.” The Grail Castle in these literary tales is entirely mythical, but that hasn’t stopped speculation over what real-world medieval structures it may be referencing. One such candidate is the castle at Montségur, which today is a gorgeous mountaintop ruin perched 3,900 feet high in the mountains of France. 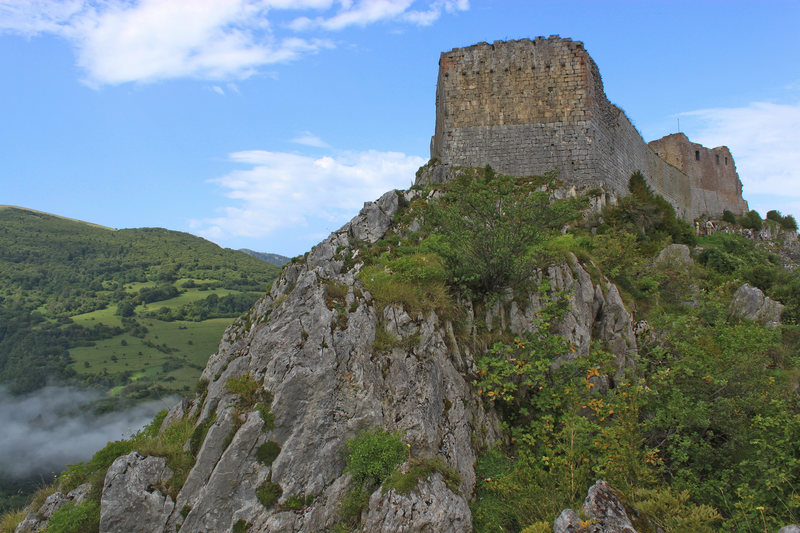 The fortress ruins at Montségur today are located on the site of a former 13th-century castle that was once the center of the Cathar church, a Christian sect with dualist beliefs—meaning they considered there to be one good god and one evil god. It is said to have temporarily housed sacred treasures including the Holy Grail. Montségur is believed to be the Holy Grail castle mentioned in Wolfram Eschenbach’s grail epic Parzival (“Percival”), in which the grail was taken from the castle when it was conquered by the royal French army.

The medieval legends of Joseph and Arthur also became entwined with the mysterious Knights Templar, the ancient religious order that has long been rumored to be the guardians of the Holy Grail.

The order formed in 1120 as a small group of monks in Jerusalem, headquartered at Solomon’s Temple, not far from where Jesus was entombed. It’s believed the knights dug around the temple looking for religious artifacts, and one theory is that they discovered the holy cup in the process. It’s thought the Templars then squirreled it away to Britain when they were persecuted after the first Crusade, and have been hiding it ever since in various secret locations throughout Europe and North America.

The centuries-long mystery surrounding the Templars has been perfect fodder for grail-seekers over the years, leaving room for speculation, stories, and conspiracies. Some believe the Knights themselves may have encouraged the lore by promoting or even writing many of the Arthurian legends about the quest for the Holy Grail.

After the Renaissance the grail stories fell out of vogue—temporarily. The legend was brought back into popularity by Richard Wagner’s dramatic opera Parsifal in 1882, paving the way for a new flood of grail fascination in the modern era, which materialized in everything from Nazi rituals to Monty Python to Indiana Jones to Dan Brown’s bestselling book and subsequent film The Da Vinci Code (which draws heavily from the 1982 book “Holy Blood, Holy Grail.”)

The Da Vinci Code resuscitated the myth that the Knights Templar secretly hid the Holy Grail under Rosslyn Chapel in Scotland. (Although in this alternative history the grail is interpreted as the remains of Mary Magdalene, who, in Dan Brown’s universe, was Jesus’ wife.) 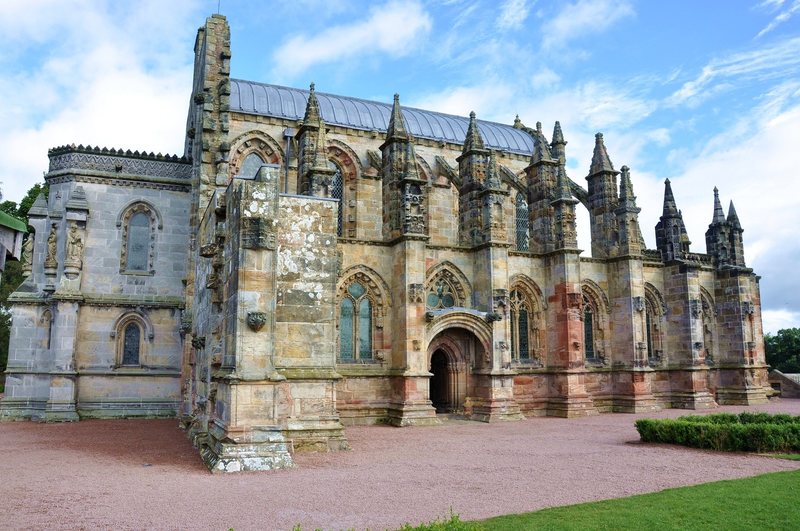 This tiny 15th-century chapel is a hotbed for conspiracy theorists and occultists. It had been linked with the Templars, Freemasons, and Illuminati, in part because its interior is full of mysterious sculptural carvings that range from Nordic pagan figures to Christian images to the apparent seal of the Knights Templar, making up an iconography that’s one of the more puzzling of the European Heritage.

The myth goes that a small group of Templars flocked into Scotland with the coveted treasure, then hid their gold and holy relics, the Holy Grail among them, in several locations including the vault of Rosslyn Chapel. Though this has been debunked by skeptics, it’s one of the most popular grail theories today.

It’s worth wondering, though: What if the Knights Templar never did find the grail in Jerusalem? While less enticing, this reasonably logical course of events could mean the holy cup is still buried somewhere in the extensive network of tunnels and sewers stretching underneath the holy city. 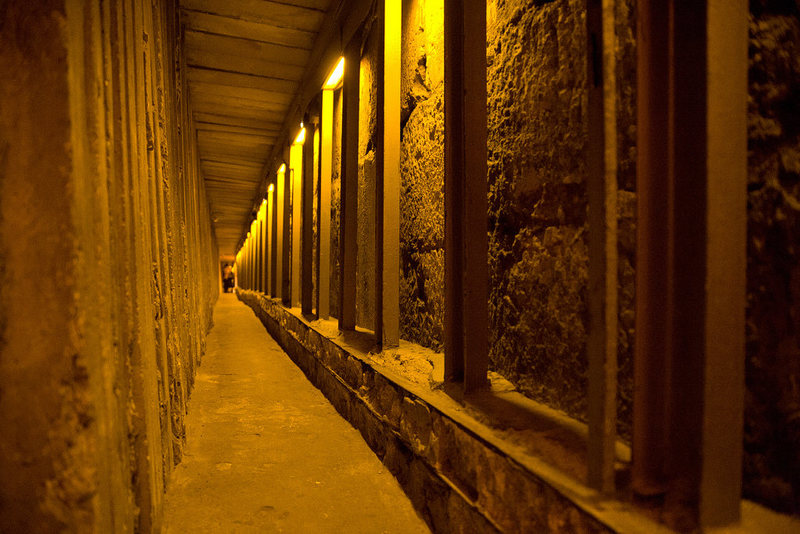 One of these ancient tunnels, built more than 2,000 years ago to support the height of the Western Wall surrounding the Temple on the Mount, was only unearthed as recently as the 19th century. Archaeologists are still excavating the tunnels under the wall, discovering some ancient artifacts in the process. Some even believe the Ark of the Covenant is still hidden beneath the Temple Mount and—who knows—maybe the Holy Grail as well.

Of course, even if the cup is out there somewhere, there would likely be no way to prove it is the Holy Grail. And that’s part of the beauty of it: As long as the fascination holds, the myth, and the quest itself, may continue indefinitely.