I’d like to talk about one of the most important things you can do for learning. It’s scientifically demonstrated to have a huge impact on your memory, attention and energy levels. Yet, tragically, it’s often the first thing many people jettison when they’re preparing for a big test.

The Most Powerful Learning Technique

The technique is sleep.

Sleeping 7-8 hours per night has an enormous impact on your ability to learn. Cutting sleep, even for as little as one night, can have irreversible impacts on what you learn both before and after, in your fatigued state.

Pulling all-nighters should be banned from your life as a valid tool to cram information. The costs are simply too high.

Even if you’re not staying up for days on end trying to learn, few of us get the sleep we need to learn at our best.

What You’re Doing When Sleeping

Sleep is not a passive activity. Although it seems like you’re doing nothing but resting, the mind is highly active during your moments of slumber.

While your head is on the pillow, your brain is engaging in very important work. This includes:

One of the first studies to demonstrate the importance of sleep to memory was the 1924 study by John Jenkins and Karl Dallenbach. In it, they compared rates of forgetting over the same time period when subjects were awake and asleep. The results are quite dramatic: 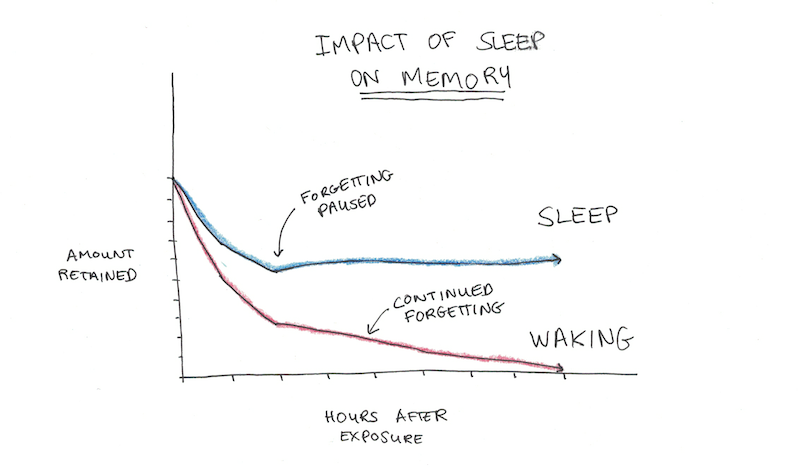 “Indeed, if you were a participant in such a study [on sleep and memory], and the only information I had was the amount of deep NREM sleep you had obtained that night, I could predict with high accuracy how much you would remember in the upcoming memory test upon awakening, even before you took it.”[2]

The importance of natural, healthy sleep (as opposed to merely being unconscious) means that you should be wary about the substances you ingest if you want to get the learning-accelerated benefits of a proper night’s sleep.

Drinking, for instance, is widely believed to help with sleep. Unfortunately, the sedative effects of alcohol also inhibit the memory consolidation effects of NREM sleep.[3] Therefore, a night out drinking can be nearly as bad as a night without sleeping in terms of the impact on your memories.

Sleeping pills also prevent many of the healthy benefits of regular sleep, so they can compound your problems with insomnia and make them even worse. Instead, Walker argues in favor of cognitive behavioral therapy for insomnia, which research suggests should be the first-line treatment, rather than pills.[4]

Amphetamines and other drugs commonly employed by students to achieve higher levels of focus can also interfere with sleep, particularly if they’re taken later in the afternoon. Thus the caffeine you drink or stimulants you think will help you study better may end up making your learning much less efficient.

Even artificial light can delay your circadian rhythm, making it harder to fall asleep at an early enough hour to get proper rest.

What Should You Do Instead?

I recommend a two-fold approach to get the benefits of sleeping, not only for memory consolidation, but for improving your energy, attention, emotional stability and mood:

The first is to recognize that sleep is an active part of learning. Cutting sleep to spend more time studying is counterproductive. No approach to learning should make sleeping less than 7-8 hours per night a part of the plan.

The second is to put a plan in place to sleep better. Even if you recognize that sleep matters, it’s still easy to have your habits fall short of the ideal. There’s a few steps you can do to maximize your learning advantage through proper sleep:

Improve Your Learning with More than Just Sleep

If you find lessons like these helpful, you’ll enjoy Rapid Learner. This is my full program for turning you into a more effective learner. I’ll guide you through the step-by-step process you can use to learn anything, whether it’s a language, class, skill or hobby, as effectively as possible