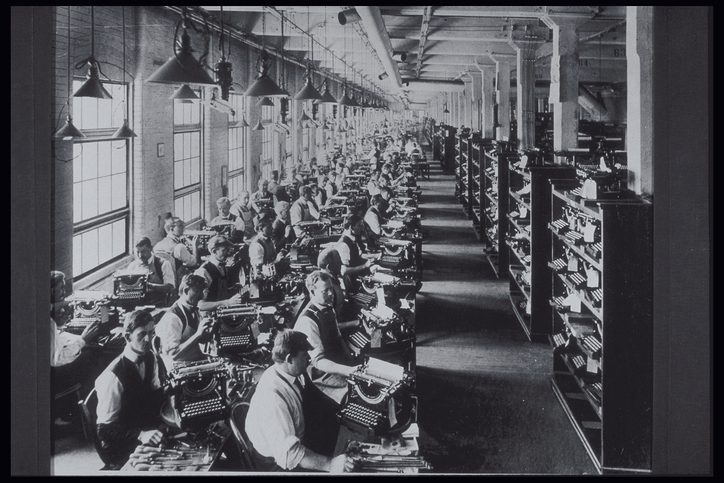 As workers, we are obsessed with getting stuff done. No wonder there seems to be a bottomless well of advice, filled with evangelists, gurus, and thought leaders proferring hacks, tools, tricks, and secrets to help us pack more output into the waking hours of our workdays. Productivity software alone accounts for an $82 billion market, according to IBISWorld research.

But where, exactly, did this lust for wringing greater efficiency from every possible second originate?

As Old As America Itself

There’s no definitive source, but we start to see historical mentions of productivity in that classic economics text Wealth of Nations, written by Adam Smith in 1776. In it, Smith contended that there were two kinds of labor: productive and unproductive.

There is one sort of labor which adds to the value of the subject upon which it is bestowed; there is another which has no such effect. The former, as it produces a value, may be called productive; the latter, unproductive labor. Thus the labor of a manufacturer adds, generally, to the value of the materials which he works upon, that of his own maintenance, and of his master’s profit. The labor of a menial servant, on the contrary, adds to the value of nothing . . . A man grows rich by employing a multitude of manufacturers; he grows poor by maintaining a multitude of menial servants. The labor of the latter, however, has its value, and deserves its reward as well.

Benjamin Franklin, a contemporary of the Scottish economist with plenty of productivity theories of his own, put forth what might be considered the first “to-do” list in 1791. The productivity measure in Franklin’s list of tasks (wash, work, read, work, put things in their places) was less likely to be measured in hard numbers like Smith’s. Franklin’s assessment was simple: Start the day asking what good shall be done, and at the end of the day evaluate based on what was accomplished. Lofty, to be sure, but an interesting measure nevertheless.

The Abuses of Labor in the Name of Productivity

Another milestone advancing the discourse in productivity occurred during the same era when Eli Whitney invented the cotton gin in 1793. This impacted the U.S. economy, particularly in Southern states where cotton was grown and picked by slaves. Of course, slave labor was free, and abuse of slaves was rampant, yet the landowners got an additional boost to their bottom lines by implementing a machine that increased their production 25-fold. We can also thank Whitney’s invention for introducing the term “gin up” (which means speed up) to our productivity parlance.

The cotton gin wasn’t the only technological advancement to grow out of the early days of the Industrial Revolution in the U.S. Other machines–from steamboats to sewing machines, light bulbs to telephones–that moved production from handmade in the home to factories sprung up across the country during the late 18th and early 19th century and the frenzy with producing more goods more quickly became something of a national pastime.

Slavery was thankfully abolished after the Civil War, but low-wage factory workers (many of whom were children) continued to toil in unsafe conditions for decades, all in the name of increasing productivity. It took years, but eventually, the organization of labor unions put measures in place to protect workers from the excesses of the push for productivity, like those who perished in the Triangle Shirtwaist factory fire in 1911 when its management refused to recognize their demands.

The Birth of the Day Planner and Consultants

The notion of planning’s role in increasing productivity was enjoying a moment during the rumblings of the Industrial Revolution. A Boston Globe report reveals that by 1850, day planners were not only proliferating, their makers were making bank. An 1844 list of wealthy taxpayers shows that among the two Boston businessmen with $100,000 or more was a blank book manufacturer. Productivity became inexorably linked to the virtue of working hard at this time, too. Etiquette manuals of the era suggested that the daily planner was a means to self-improvement.

Although the 20th century was rocked by two World Wars and the Great Depression, productivity was a focal point for manufacturing of goods needed to support military efforts and later, to satisfy the demands of the U.S.’s growing middle class.

So it was ripe for the rise of the earliest efficiency expert, an industrial engineer from Philadelphia named Frederick Winslow Taylor. Nicknamed Speedy Taylor, he would get himself a consulting gig with a company, observe its workers, and calculate how they could do their jobs faster (and then charge a hefty sum for the report).

Peers Frank and Lillian Gilbreth, best known today as the parents in Cheaper by the Dozen, were mining a similar productivity vein by dividing human action into 17 motions and then determining which was the most efficient and effective way to do any task.

From these somewhat ignominious beginnings (Taylor was believed to be a liar who fudged his numbers, and Frank was famous for saying postpartum bedrest was a waste of time–prompting Lillian to keep working after the birth of each of her 15 children) grew a sizeable industry of management consultants who aimed to tackle the productivity problem from every possible angle.

Then Came the Productivity Gurus

Among some of the more recognizable players is Tom Peters, whose book In Search of Excellence chronicles the productivity practices of “America’s best-run companies.” Michael Porter wrote Competitive Advantages, also exalting the leadership of productive management practices.

Let’s not forget Bill Smith, an engineer at Motorola who introduced Six Sigma in 1986 as “a disciplined, data-driven approach and methodology for eliminating defects (driving toward six standard deviations between the mean and the nearest specification limit) in any process–from manufacturing to transactional, and from product to service.”

According to Six Sigma, “Productivity is much more important than revenues and profits of the organization because profits only reflect the end result, whereas productivity reflects the increased efficiency as well as effectiveness of business policies and processes. Moreover, it enables a business to find out its strengths and weaknesses. It also lets the business easily identify threats as well as opportunities that prevail in the market as a result of competition and changes in business environment.”

The Current State of Productivity and What’s Next

The thing is that in the frenzy to be more productive, we as a nation have become a little less so. Economist Robert Gordon of Northwestern University chalks this up to the fact that we are using methods and procedures that are over a decade old. He told the Atlantic, “We had a great revolution in the 1980s and ’90s as businesses transitioned from paper, typewriters, file cabinets to personal computers with spreadsheets, word-processing software. And then that revolution was accompanied in the 1990s by the internet, by free information through search engines, through e-commerce, and doing away with paper.” Until we start incorporating more robots and AI to take over our rote tasks, this downward trend will continue.

The other obsession with productivity is entwined with a false belief that we need to be working all the time to be our most productive selves. And that’s simply not true. As Leila Hock points out: “It’s not hard work–work is work, and yes, some work requires more brain power, but most of us smart people like that and want more of it, so let’s stop calling it hard. Let’s call it productive. Effective. Valuable. Anything that speaks to nature over quantity, because that’s what we need more of.”

Seems like Ben Franklin’s to-do list had it right all along. Work and assess what good was accomplished that day. Then the most productive day will have the most good attached to it.

Lydia Dishman is a reporter writing about the intersection of tech, leadership, and innovation. She is a regular contributor to Fast Company and has written for CBS Moneywatch, Fortune, The Guardian, Popular Science, and the New York Times, among others.