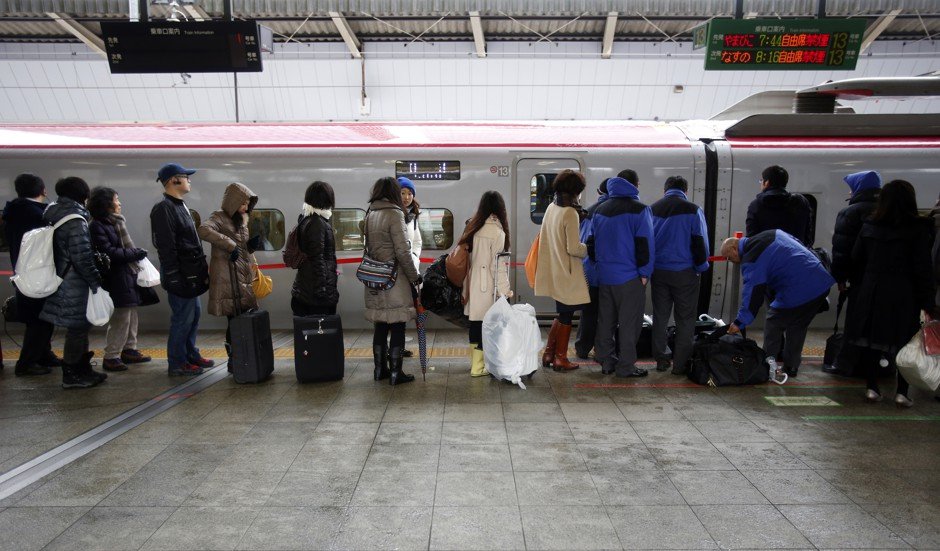 Passengers line up for a bullet train at a platform in Tokyo Station. Photo by Yuya Shino/Reuters

It is a scene that plays out each weekday morning across Tokyo. Suit-clad office workers, gaggles of schoolchildren, and other travelers gamely wend their way through the city’s sprawling rail stations.

To the casual observer, it is chaos; commuters packed shoulder-to-shoulder amid the constant clatter of arriving and departing trains. But a closer look reveals something more beneath the surface: A station may be packed, yet commuters move smoothly along concourses and platforms. Platforms are a whirl of noisy activity, yet trains maintain remarkable on-time performance. Indeed, the staggering punctuality of the Japanese rail system occasionally becomes the focus of international headlines—as on May 11, when West Japan Railways issued a florid apology after one of its commuter trains left the station 25 seconds early.

Tokyo is home to the world’s busiest train stations, with the capital’s rail operators handling a combined 13 billion passenger trips annually. Ridership of that volume requires a deft blend of engineering, planning, and psychology. Beneath the bustle, unobtrusive features are designed to unconsciously manipulate passenger behavior, via light, sound, and other means. Japan’s boundless creativity in this realm reflects the deep consideration given to public transportation in the country. 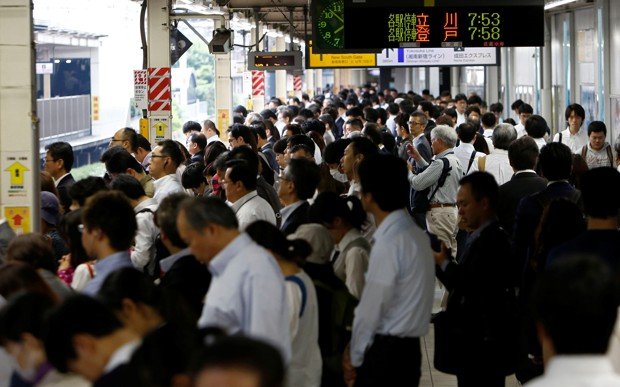 Passengers wait for a train at a platform of a station in Kawasaki. Photo by Kim Kyung-Hoon/Reuters

Rail stations, whether in Japan or elsewhere, are also great places to see “nudge theory” at work. Pioneered by behavioral economist Richard Thaler, who was awarded the 2017 Nobel Memorial Prize for his work, and Harvard Law School professor Cass Sunstein, the theory posits that gentle nudges can subtly influence people towards decisions in their own (or society’s) best interests, such as signing up for private pension schemes or organ donation. In the U.K., there’s a government office devoted to the idea, the Behavioural Insights Team (or “nudge unit”), and their work often shows up in the transit realm.

In 2016, for instance, London Underground operator Transport for London partnered with the behavioral science department at the London School of Economics to develop ways of encouraging riders to queue on both sides of station escalators as a means of increasing their capacity in the capital’s Holborn Station. Among other measures, simple hand and footprints were also painted on each side of the “up” escalators. In Australia, researchers conducted an experiment with lighted directional arrows on signposts to improve flows of departing passengers. Using a camera system designed to recognize and distinguish brisk-walking businesspeople from dawdling tourists, for example—green arrows would flash to direct commuters in an efficient route towards the exit.

When it come to passenger manipulation, what sets the stations of Japan apart from their counterparts is both the ingenuity behind their nudges and the imperceptible manner in which they are implemented. Japan’s nudges reflect a higher order of thinking. The orderliness of society is taken as a given—Japanese commuters know how to queue on an escalator and can easily navigate the confusing, but wide-open, spaces of Tokyo’s rail stations without assistance. This allows rail operators to instead focus on deeper psychological manipulation.

The Ultimate in Mood Lighting

Japan has one of the highest suicide rates among OECD nations, and often, those taking their own lives do so by leaping from station platforms into the path of oncoming trains, with Japan averaging one such instance each day. It is a brutal, disruptive end that can also wreak havoc across the transit system.

To address the issue, stations across Tokyo and the rest of Japan installed chest-high barriers as a means of preventing suicide attempts. But platform barriers are expensive, and about 70 percent of Japan's largest and most-travelled stations do not have the platform space or structural strength to accommodate them. While there are hopes to have platform barriers installed in all 243 of Tokyo’s train stations by 2032 (at a cost of $4.7 billion), rail operators in the interim have come up alternative approaches.

Standing at either end of a platform in Tokyo’s labyrinthine Shinjuku Station, one might detect a small square LED panel emitting a pleasant, deep-blue glow. Nestled among vending machines and safety posters, the panel might be dismissed as a bug zapper. But these simple blue panels are designed to save lives. 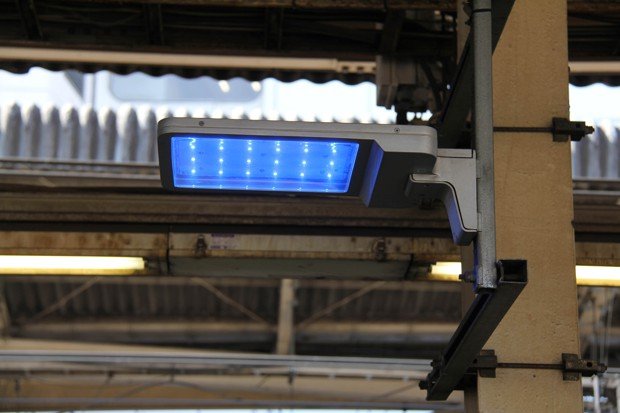 Operating on the theory that exposure to blue light has a calming effect on one’s mood, rail stations in Japan began installing these LED panels as a suicide-prevention measure in 2009. They are strategically located at the ends of each platform—typically the most-isolated and least-trafficked area, and accordingly, the point from which most platform jumps occur. Some stations, such as Shin-Koiwa Station in Tokyo, bolster their LED regime with colored roof panels, allowing blue-tinted sunlight to filter down on to platforms.

It is an approach that has proven to be surprisingly effective. According to a study by researchers at the University of Tokyo published in the Journal of Affective Disorders in 2013, data analyzed over a 10-year period shows an 84 percent decline in the number of suicide attempts at stations where blue lights are installed. A subsequent study revealed no corresponding increase in suicide attempts at neighboring stations lacking such lights.

The idea has been picked up in the U.K.: Several stations in England now emulate the Japanese approach, with blue LED light panels on station platforms.

A Song for a More Peaceful Departure

Commuting during rush hour in Japan is not for the faint of heart. The trains are jam-packed at as much as 200 percent capacity during the height of rush hour, and razor-thin connection times to transfer from one train to another leave little margin for error. Compounding the stressful nature of the commute in years past was the nerve-grating tone—a harsh buzzer used to signal a train’s imminent departure. The departing train buzzer was punctuated by sharp blasts of station attendants’ whistles, as harried salarymen raced down stairs and across platforms to beat the train’s closing doors.

Also known as departure or train melodies, hassha tunes are brief, calming and distinct; their aim is to notify commuters of a train’s imminent departure without inducing anxiety. To that end, most melodies are composed to an optimal length of 7 seconds, owing to research showing that shorter-duration melodies work best at reducing passenger stress and rushing incidents, as well as taking into account the time needed for a train to arrive and depart.

The tunes feature whimsical titles like “Seaside Boulevard” and range from the wistful to the jaunty. Most stations have their own melodies, forming de facto theme songs that become part of a station’s identity. Tokyo’s Ebisu Station, for example, is known for its departure melody—a short, stylized version of the theme from The Third Man.

As more stations have added melodies over the years, the original thesis has proven correct. A study conducted in October 2008 at Tokyo Station, for instance, found a 25 percent reduction in the number of passenger injuries attributable to rushing after the introduction of hassha melodies on certain platforms.

The use of these jingles is not without controversy, however. Shortly after their introduction, residents living near open-air rail stations, weary of hearing endless repetitions of the same jingles all day, complained of noise pollution.

Despite, or perhaps because of, its reputation as a remarkably safe country, Japan is nonetheless vigilant in combatting youth delinquency. Train stations are particularly sensitive in that regard, since large congregations of young people pass through stations at all hours of the day.

To address the Japanese fear of loitering and vandalism by young riders, some train stations deploy ultrasonic deterrents—small, unobtrusive devices that emit a high-frequency tone. The particular frequency used—17 kilohertz*—can generally only be heard by those under the age of 25. (Older people can’t detect such frequencies, thanks to the age-related hearing loss known as presbycusis.) These devices—the brainchild of a Welsh inventor and also used to fend off loitering teens in the U.S. and Europe—have been enthusiastically adopted in Japan.

Standing outside one of Tokyo Station’s numerous exits on a recent summer day, it was easy to see the effectiveness of this deterrent in action. Weary salarymen and aged obaachan passed under the sonic deterrent without changing pace. Among uniform-clad students, however, the reactions were evident—a suddenly quickened pace, a look of confusion or discomfort, and often a cry of urusai! (Loud!) None appeared to connect the noise to the deterrents placed almost flush in the ceiling panels above.

Rail employees are not exempt from the behavioral hacks of their employers. Perhaps most famously, Japanese train conductors, drivers, and platform attendants are mandated to use the “point and call” method—called shisa kanko—in executing tasks. By physically pointing at an object, and then verbalizing one’s intended action, a greater portion of the brain is engaged, providing improved situational awareness and accuracy. Studies have repeatedly shown that this technique reduces human error by as much as 85 percent. Pointing-and-calling is now a major workplace safety feature in industries throughout Japan.

So, why don’t train workers everywhere do this? Like so many aspects of Japanese transit culture, shisa kanko has proved resistant to export (though pointing-and-calling has been adopted in modified form by New York City’s transit authority). In this, as in so many things, Japan’s rail system stands largely alone.

Allan Richarz is a privacy lawyer and writer based in Tokyo, Japan.