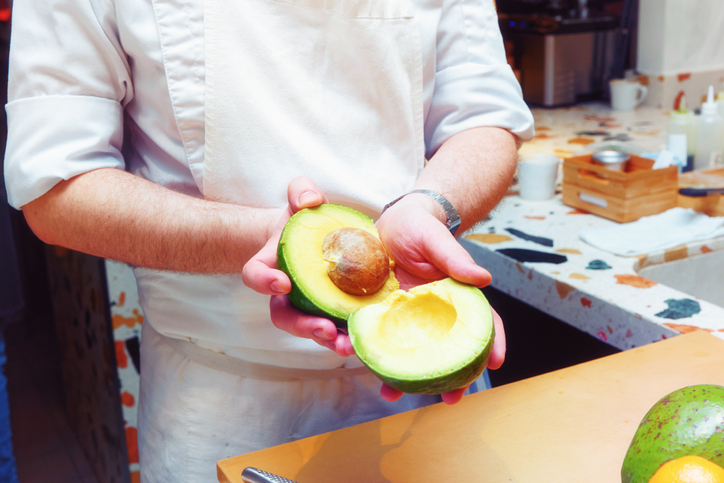 One avocado can require 320 litres of water to grow. Photo by Kondor83/Getty Images

On the one hand, they are deliciously creamy, versatile and gloriously Instagrammable. On the other, they have an enormous carbon footprint for a fruit, require up to 320 litres of water each to grow and “are in such global demand they are becoming unaffordable for people indigenous to the areas they are grown in”, according to Thomasina Miers, the co-founder of the Mexican restaurant chain Wahaca.

For some time, the chef has struggled to balance the devastating environmental impact of avocado production with her customers’ appetite for guacamole. Now, she thinks she has found the answer: a vibrant, green guacamole-inspired dip, made from fava beans, green chilli, lime and coriander.

The dip – called Wahacamole – debuted in October 2021, but Wahaca is not the first restaurant to remove or reduce its reliance on avocado. In Toronto, the Mexican chef Aldo Camarena recently suggested a guacamole alternative made with courgette and pumpkin seed paste. In 2020, the chef Santiago Lastra included a guacamole-style dip made from pistachios and fermented gooseberries on the menu at Kol, his Mexican restaurant in London. In 2018, the Irish restaurateur JP McMahon called avocados the “blood diamonds of Mexico”; he has developed a guacamole alternative made using jerusalem artichokes.

This trend is not confined to the restaurant industry. In October 2021, the TikTok star Calum Harris (AKA @madebyblitz) garnered 371,000 likes on his recipe for “guacamole” made with frozen peas, while, on Instagram, the hashtag #noavocado has 3,220 posts and counting.

“A few years ago, I was quite well known for my use of avocados in my cooking – so much so that I dedicated a whole Instagram account (@avodaily) to my love for them,” says the vegan cookery writer Bettina Campolucci Bordi. She decided to cut back when she moved to the UK, having previously lived in Spain, where she could source avocados locally. “My favourite recipe to date uses British peas instead. I blanche the peas before crushing them and mixing them with plant-based sour cream, salt and pepper, a little grated garlic and a spritz of lemon juice.”

Wahaca’s decision to offer an alternative to guacamole is perhaps the clearest indication to date that “parts of the food industry are beginning to wake up to the enormity of the issues we face as a result of intensive farming”, says Tim Lang, a professor of food policy at City, University of London. Avocados have become a “global commodity crop”, he says, the perfect example of what happens when “an exotic food becomes normalised with no thinking through of the consequences”. Problems including deforestation, loss of biodiversity, and water shortages mean that “the communities growing them do not have enough water for washing and hygiene”, adds Lang.

But avocados are challenging to replace – as are their derivatives, avocado oil and avocado butter, which are important in gluten-free and vegan baking. Plus, for many fans of the fruit, a dip made from beans, nuts, seeds or vegetables is no more a replacement for guacamole than smashed broad beans on toast (as suggested by Tom Hunt’s recipe for not-avocado on toast) is an alternative to smashed avocado. Perhaps anticipating this complaint, Wahaca has said that “a traditional, freshly made guacamole” will remain on its menu, for which all of its avocados are “sourced at the most sustainable levels possible”.

Miers, who worked with the British pulse grower Hodmedod’s to create Wahacamole, says: “The fact that we can grow [fava beans in the UK] using regenerative farming methods that fix both nitrogen and carbon into our soil is an added boon.” While guacamole swaps may not exactly replicate the taste of avocado, the feedback has been good at Wahaca. “We’ve been giving people Wahacamole to try for free when they come in to dine with us – and on the whole they seem genuinely interested in giving it a go. Most are enjoying it and many are ordering more,” says Miers.

Lastra says: “We were looking not to recreate, but to produce a similar sensorial experience. What does an avocado mean in terms of sight, texture, aroma and flavour? And how do we paint that with the tools we have?” His blend of pistachios, pine oil, cucumber juice and fermented gooseberries may not fool an avocado connoisseur, but Lastra tells me most people “can’t actually tell the difference … they really enjoy it”. It has all the creaminess, tang and colour of traditional guacamole, he says – and it doesn’t look bad on Instagram, either.