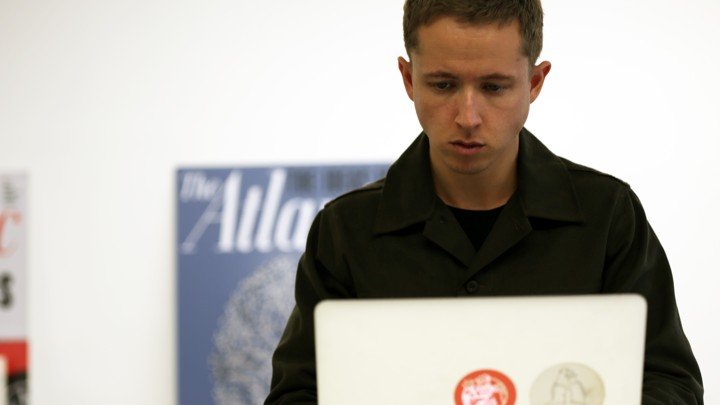 The author, not writing email. Photo by Nicolas Pollock / The Atlantic.

I recently cut the amount of time I spent on email by almost half, and I think a lot of people could do the same.

I’m sure my approach has made some people hate me, because I come off curt. But if everyone thought about email in the same way, what I’m suggesting wouldn’t be rude. Here are the basic guidelines that are working for me and, so, I propose for all of the world to adopt immediately:

None of the above. You can write your name if it feels too naked or abrupt not to have something down there. But it shouldn’t, and it wouldn’t if it were the norm.

Don’t waste time considering if “Dear,” or “Hey” or “[name]!” is appropriate. Just get right into it. Write the recipient’s name if you must. But most people already know their names. Like they already know your name.

Greetings and closings are relics of the handwritten missive that persist only as matters of, ostensibly, formality. Foregoing them can seem curt or impolite. But it’s the opposite. Long, formal emails are impolite.

Text messages and chat platforms like Gchat and Slack require no such formality, so why should it seem rude to forego it in email? It’s a culture overdue for change. In my experience, most people over age 70 or so are already totally down with blunt emails, it’s just the younger people who have been slow to adapt and insist on making each missive into a production on which they will be heavily judged, and on judging one another accordingly.

An email is an imposition on a person’s time. Writing to someone is saying I know you have a finite amount of time and attention today, and in life, and I’m going to take some of it.

Undue formality only wastes more of that time. And it wastes the writer’s time in worrying about exactly how formal to be.

Rarely does an email require more than three sentences. If it does, consider calling or getting together in person. Social interaction is healthy, and more time spent in the inbox isn’t likely to be.

Our novelty-driven brains tend to give priority to whatever email is newest, unread, at the top of the pile. Even if it’s some quotidian thing. While we leave important conversations (or other non-email tasks) unattended.

Remember always that newness does not signal priority.

Aspiring to inbox zero—an empty inbox, perfectly clean and organized and contained—is for most people some mythical idea. The world seems to be conspiring to keep it from happening. And obsessing over it can be totally counterproductive if it means you give priority to emails that don’t deserve your attention at the moment.

But inbox zero is totally possible if you add emails to a to-do list, along with all other worldly tasks, that you can keep prioritized according to what you really need to get done. What you really want out of any given day, week, or lifetime. Which is rarely to be beholden to the whims of an inbox.

Check only two or three times a day.

If your job allows, obviously. (And most do, if you insist on it.)

I used to check more like 100 times. Many American workers spend a total of six hours a day in their inbox, according to one calculation (which seems high to me). Others have put it closer to two hours, though that doesn’t factor in the time lost during switching tasks. Every time you check your email, you lose an additional 30 seconds or so that it takes to refocus your attention on whatever you were doing.

When you do check, plow through that inbox.

The people who might need you more urgently should know to call or text you.

Some of our past productivity ideas that you might have missed, all of which are excellent, include Tabless Thursday, a “cool” button, and grayscaling.

I don’t want to overstate the potential benefits of everyone spending less time and energy on email, but it would have health and economic benefits that would ripple across societies forever.