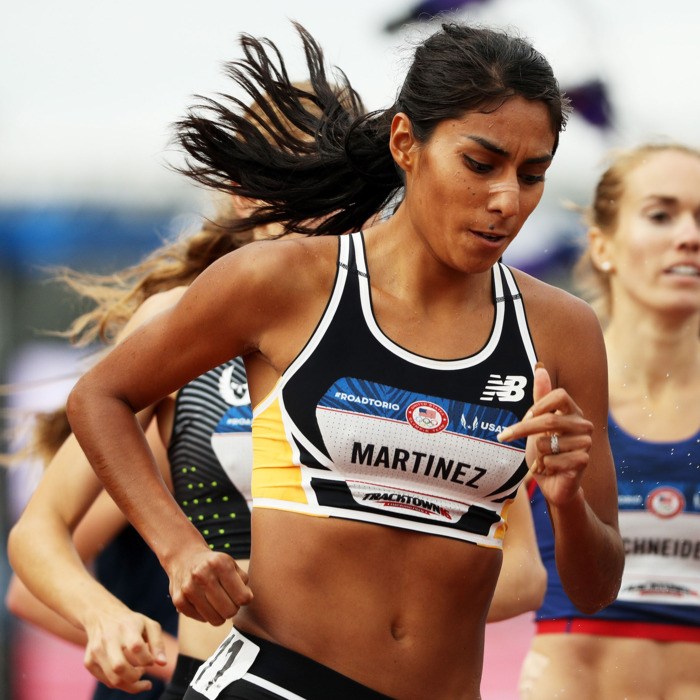 At the United States Track & Field Olympic Team Trials in Eugene, Oregon, 28-year-old Brenda Martinez was in prime position to win her best event, the 800-meter run, which would qualify her for the Olympics for the very first time. But with less than 100 meters to go, a trailing runner tripped and fell forward into Martinez, throwing her off balance. She was able to regain her footing, but not before being passed by a handful of other runners who would secure the three Olympic spots. It was devastating to watch.

Martinez could have been distraught and dejected. She failed (and largely due to bad luck) to achieve her goal of making the Olympics in her strongest event. But instead of feeling sorry for herself, Martinez told reporters that she was focused on getting ready for the 1500-meter run, the other event she was competing in. “The track doesn’t care about your feelings,” she said. “You’ve just got to move forward.”

And move forward she did. Less than one week later, in the 1500 meters, Martinez literally dove across the finish line to secure third place — by three one-hundredths of a second — earning her the opportunity to represent the United States in Rio.

It’s easy to see how Martinez could have lost focus and been sucked into a vicious cycle of rumination. But when I spoke with Martinez shortly after these events unfolded, she told me that it was the same mind-set that got her to the Olympic trials in the first place — after ten years of training, which included setbacks, false milestones, and close calls — that got her through it. “I just quickly let go of what happened in the 800m and got back to my routine, to focusing on all the little things I could do that would give me the best chance of running well later in the week.”

Brenda Martinez wasn’t attached to her goal of making the Olympic team. She was focused on the process.

The Problem With Goals

You wouldn’t know it from browsing the self-help aisle of your local bookstore, but scientists are beginning to question whether focusing too much on goals runs counter to long-term performance and general well-being. In a Harvard Business School report titled “Goals Gone Wild: The Systematic Side Effects of Over-Prescribing Goal Setting,”a team of researchers from Harvard, Northwestern, and the University of Pennsylvania set out to explore the potential downfalls of goal-setting. They found that overemphasizing goals — and especially those that are based on measurable outcomes — often leads to reduced intrinsic motivation, irrational risk-taking, and unethical behavior.

We see this unfold in the real world all the time: Someone becomes overly fixated on achieving a goal and loses sight of his inner reasons for setting out to accomplish it in the first place. He becomes driven by the external rewards and recognition that he hopes accomplishing his goal will bring, and, in the worst cases, he’ll go to any extreme to achieve it. This comes in many forms, including taking harmful diet pills (need to lose that weight); plagiarizing (have to publish that book); using banned performance-enhancing drugs (must make the Olympic team); or partaking in fraudulent behavior in the workplace (gotta get that promotion). According to the authors of the Harvard Business School report, these are “predictable side effects” of overemphasizing goals, and reasons that “goal setting should be prescribed selectively and presented with a warning label.”

Another problem with goals, especially those that New York Times best-selling author Jim Collins calls “big hairy audacious goals” (or “BHAGs”), is that they can seem overwhelming and amorphous. For example, a goal of finishing an Ironman triathlon is motivating until you realize how hard it is to do and that you have no idea where to start. And even if you do figure out where to start, you quickly grasp how far you have to go — both figuratively and literally. Any acute progress seems trivial. Ironically, focusing on such a goal can demoralize, demotivate, and, ultimately, detach you from the steps you need to take today to accomplish it.

Still, let’s say you persist and accomplish your big, hairy, and audacious goal. If that’s all that you were focusing on, what happens next? Some people feel a void in their life, becoming saddened and even depressed — what marathon runners often experience as the “post-race blues.” Others, meanwhile, fall victim to what author Gretchen Rubin calls the “danger of the finish line”: Once you accomplish your goal, you drop the good habits that got you there. (A common example of this is yo-yo dieting.) Both of these outcomes are related to a goalcentric approach — and neither is desirable.

But perhaps the biggest potential pitfall of concentrating too much on goals is this: It often ties your self-worth to things that you cannot control. Imagine that unprecedented weather conditions strike on race day, preventing you from finishing your Ironman triathlon. Or that the boss who was going to promote you becomes ill and retires. Or that you write what you believe to be the perfect manuscript, but the publishing house feels differently. Do these events make you a failure? If you judge yourself based on whether or not you accomplished your goal, then, unfortunately, the answer is yes. Becoming a slave to the achievement of a specific goal creates a volatile and fragile sense of self.

This isn’t to say that you should completely disregard goals. Goal setting can as an effective steering mechanism, a north star to shoot for. But after you set a goal, it’s best to shift your focus from the goal itself to the process that gives you the best chance of achieving it; and to judge yourself based on how well you execute that process.

Focus on the Process Instead

Focusing on the process means breaking down a goal into its component parts and concentrating on those parts. It’s an incredible focusing mechanism that keeps you in the here and now, even during the pursuit of distant goals. For Martinez, this meant not worrying about her bad luck in the 800m, but rather ensuring she got in the right nutrition, bodywork, sleep, and workouts to give herself the best chance of running a good race in the 1500m. Again: She wasn’t focused on making the Olympics. She was focused on the process of making the Olympics.

This mind-set can be applied to any goal — from qualifying for the Olympics, to earning a promotion in the workplace, to improving a relationship: First, set a goal. Next, figure out the steps to achieving that goal that are within your control. Then — (mostly) forget about the goal, and focus on nailing the steps instead.

A process mind-set creates daily opportunities for little victories, which help sustain the motivation required to accomplish long-term goals. A handful of studies, including one in the prestigious journal Nature, provide insight into why this is the case. Researchers have found that when mice accomplish micro objectives on the path to distant goals (e.g., making a correct turn in a maze), their bodies release dopamine, the neurochemical associated with motivation and drive. Without hits of dopamine, the mice become apathetic and give up. Although these studies cannot be safely replicated in humans, scientists speculate we operate the same way. Process promotes progress, and progress, on a neurochemical level, primes us to persist.

Even more important than what it does for our motivation, focusing on the process cultivates what University of Quebec psychology professor Robert J. Vallerand calls “harmonious passion.” Harmonious passion is characterized by a deep intrinsic motivation, a love for doing the work involved in achieving a goal. It’s the opposite of what Vallerand refers to as “obsessive passion,” or being motivated by and attached to the external recognition that achieving a goal might bring. Harmonious passion is embracing and relishing in the process of getting better at a given pursuit. Obsessive passion is becoming a slave to the achievement of goals for achievement’s sake. Vallerand has shown that while the latter is linked to burnout, anxiety, dissatisfaction, and depression, the former is linked to long-term performance, well-being, and fulfillment.

Perhaps the reason for this difference is that focusing on the process ensures that one’s self-worth does not hinge on the kind of uncontrollable events mentioned earlier, such as getting tripped in an Olympic qualifying event. Knowing you put in the work, that you gave something your all, breeds a special kind of confidence, fullness, and contentment that no one can take away from you. In her book Presence, New York Times–best-selling author andHarvard Business School psychology professor Amy Cuddy writes that focusing on the process “leaves you with a sense of satisfaction and accomplishment, regardless of the measureable outcome.”

Cuddy says that this mind-set lends itself to presence, which she defines as the ability to be in the moment, confident but not arrogant. When it comes to achieving your goals, perhaps it is this kind of presence, fostered through process, and embodied by Brenda Martinez, that is the most critical asset of all.