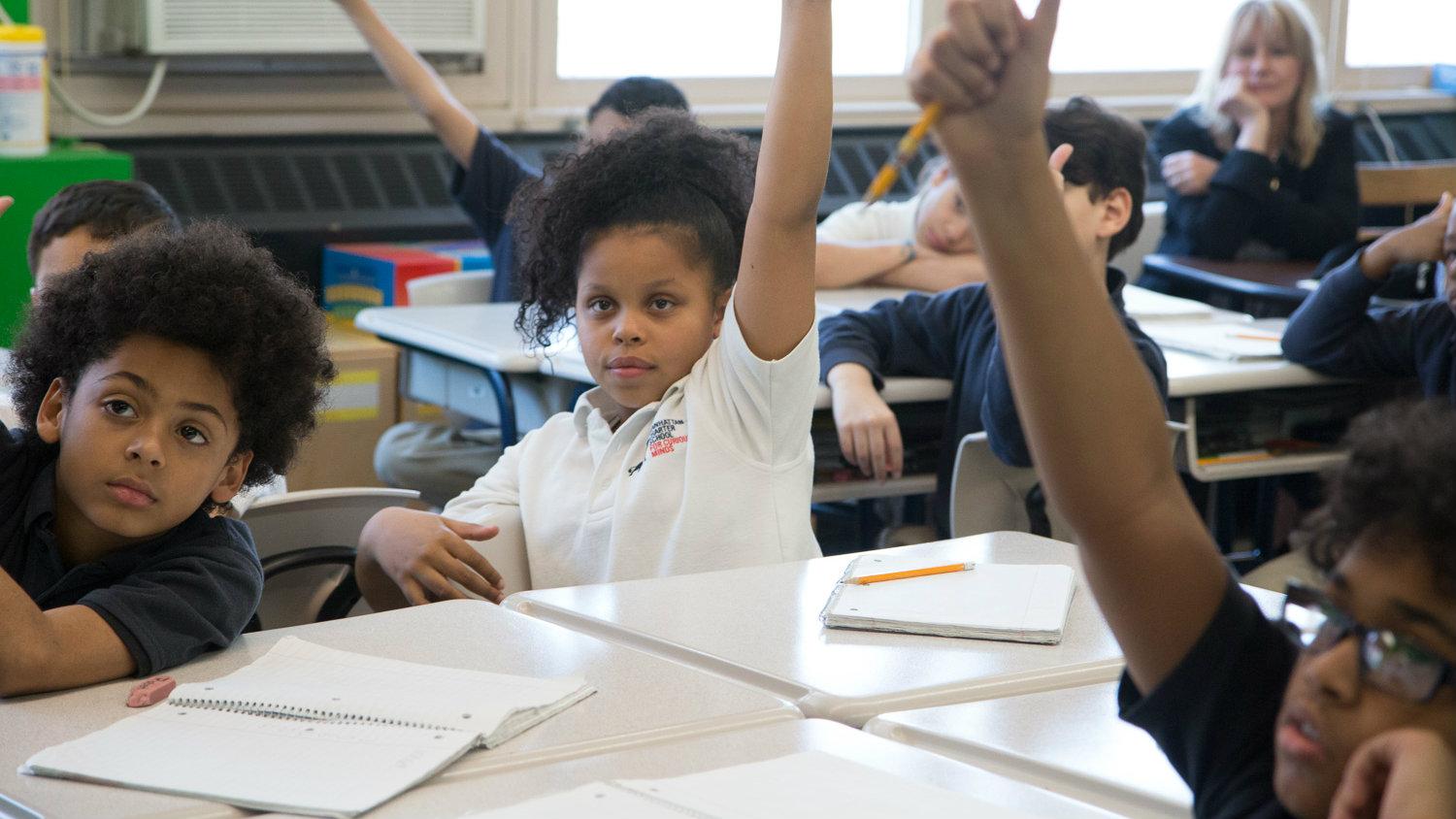 Math is a notoriously hard subject for many kids and adults. There is a gender gap, a race gap, and just generally bad performance in many countries.

John Mighton, a Canadian playwright, author, and math tutor who struggled with math himself, has designed a teaching program that has some of the worst-performing math students performing well and actually enjoying math. There’s mounting evidence that the method works for all kids of all abilities.

As of 2017, his program, JUMP (Junior Undiscovered Math Prodigies) Math, is being used by 15,000 kids in eight US states (it is aligned with the Common Core), more than 150,000 in Canada, and about 12,000 in Spain. The US Department of Education found it promising enough to give a $2.75 million grant in 2012 to Tracy Solomon and Rosemary Tannock, cognitive scientists at the Hospital for Sick Children and the University of Toronto, to conduct a randomized control trial with 1,100 kids and 40 classrooms. The results, due out in late 2017, hope to confirm previous work the two did in 2010, which showed that students from 18 classrooms using JUMP progressed twice as fast on a number of standardized math tests as those receiving standard instruction in 11 other classrooms.

“It would be difficult to attribute these gains to anything but the instruction because we took great pains to make sure the teachers and the students were treated identically except for the instruction they received,” Solomon said.

Mighton has identified two major problems in how we teach math. First, we overload kids’ brains, moving too quickly from the concrete to the abstract. That puts too much stress on working memory. Second, we divide classes by ability, or “stream”, creating hierarchies which disable the weakest learners while not benefitting the top ones.

Mighton argues that over the past decade, the US and Canada have moved to a “discovery” or “inquiry” based approach to math by which kids are meant to figure out a lot of concepts on their own. The example he offers in this Scientific American article is this:

“Discovery-based lessons tend to focus less on problems that can be solved by following a general rule, procedure or formula (such as “find the perimeter of a rectangle five meters long and four meters wide”) and more on complex problems based on real-world examples that can be tackled in more than one way and have more than one solution (“using six square tiles, make a model of a patio that has the least possible perimeter”)”

Solomon said this approach—also called problem-based learning—means the teachers’ role is not to provide direct instruction, but to let kids collaborate to find solutions to complex, realistic problems which have multiple approaches and answers. But too many children don’t have the building blocks from which to discover the answers. They get frustrated, and then fixed in the belief that they are not “math people.”

Mighton thinks—and offers brain research (pdf) to support it—that kids succeed more with math when it is broken down into small components which are explained carefully and then practiced continually.

To explain the concept to me, he took a basic question—what is 72 divided by 3? He showed me multiple ways to do it, including saying three friends wants to share seven dimes and two pennies. When I pause, even for a second, Mighton apologizes and says he clearly hasn’t explained it well, and takes another stab at it a different way.

Critics would argue that all good teachers approach problems like this, from multiple angles. But many teachers struggle with their own math anxiety, and research shows that they then pass on this anxiety to their students. (That happens with parents too, unfortunately.)

And Nikki Aduba, who helped test Mighton’s method in schools in the London borough of Lambeth, said Mighton has broken down the steps so carefully that nearly everyone could catch on. Many teachers, she said, welcomed this approach. “Many thought, okay to get from A to B there are these three steps, but it turns out there are really five or six,” she said.

When Solomon conducted the pilot program on JUMP, she said it was the small, incremental steps which made the math accessible to all students and allowed some of them to experience success in math for the first time. “Because they can master the increments, they are getting the checks and building the mindset that their efforts can amount to something. That experience motivates them to continue,” she said. By continuing, they practice more math, get more skills, and become the math people they thought they couldn’t be.

Mighton says the small steps are critical. “I am not going to move until everyone can do this,” he said. “Math is like a ladder—if you miss a step, it’s hard to go on. There are a set of sequences.” He has dubbed his method “micro discovery” or “guided discovery.”

There is other evidence for its success. When the Manhattan Charter School piloted the program in in 2013-14 with its fourth graders, it experienced the highest increase in math scores in all of New York City. Now every class in the school is using it.

The program was used in Lambeth, one of the poorest areas of London, with more than 450 of its worst-performing students. At the time they started, 14 percent were performing at grade level: when the kids took their grade six exams (called Key Stage 2 exams in the UK), 60 percent passed. Aduba said it worked “brilliantly,” especially for kids who had been struggling.

“The key thing about the JUMP program is it starts small and progresses in very small steps to a very sophisticated level in a relatively short period of time,” she said. “It restored confidence in kids who thought ‘I can’t do maths.’ Suddenly, to be able to do stuff, it boosted their confidence.”

The bigger problem Mighton sees is hierarchies. Teachers tend to assume that in most classrooms there’s a bell-shaped curve—a wide distribution of abilities—and teach accordingly. It means that 20 percent of the class underperforms, 60 percent are in the middle, and 20 percent outperform, leading to a two- or three-grade range of abilities within one classroom.

“When people talk about improving education they want to move the mean higher. They don’t talk about tightening the distribution,” Mighton said.

The reason this matters is that, as research shows (pdf), kids compare themselves to each other early on and decide whether or not they are “math people.” Children who decide they are not math people are at risk of developing something Stanford psychologist Carol Dweck calls a “fixed” mindset: They think their talents are innate and cannot be improved upon. Thirty years of mindset research shows that kids with a fixed mindset take fewer risks and underperform those who think their efforts matter.

Dweck has examined JUMP and says it encourages a “growth” mindset: the belief that your abilities can improve with your efforts. “The kids move at an exciting pace; it feels like it should be hard but it’s not hard, they have this feeling of progress, that [they] can be good at this,” she said at a math conference.

Mighton says the problem with the bell curve is that everyone worries about the kids at the top getting bored. “Our data shows that if you teach to the whole class, the whole class does better,” he says. And, by moving together and having so many children experience success in math, they experience what Durkheim calls “collective effervescence,” the joy of knowing they can do it, rather than the joy of just getting a high mark.

As school districts move away from the most commercially savvy educational publishers to programs based on proper evidence—a shift that has been taking place over the past decade, albeit slowly—programs like JUMP will likely have more success. Until he won the Schwab entrepreneur of the year award in 2015, Mighton—who has been working on JUMP since 2002—has had no marketing team and has invested all of his budget into testing and refining the materials (JUMP is a nonprofit, and its teacher resources are available on its website). Pearson, by way of contrast, is a £5.3 billion ($6.6 billion) company as of 2017, with tentacles in every corner of the education market.

While many people try to paint their methods as new, Mighton is the first to admit that what he is teaching is age-old.  He believes math has been overhyped as hard, and all that students and teachers need is to have things broken down properly. Many have dubbed these simple steps as “drill and kill”. But he says the steps can be made fun, like puzzles.

Mathematicians “have big egos, so they haven’t told anyone that math is easy,” he said at the World Economic Forum in Davos. “Logicians proved more than 100 years ago it can be broken into simple steps.”