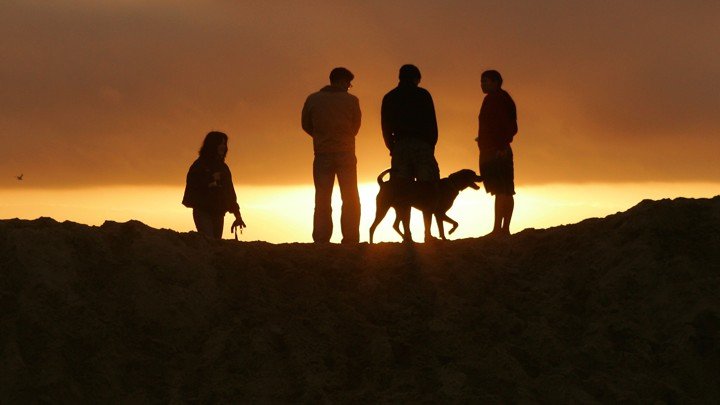 Happiness is an active process, not something you get by sitting back and waiting. It’s something to be grabbed by the horns or more vulnerable areas and then conquered. At least, this is the gist of the message from Tony Robbins and gurus of his ilk.

Many also say happiness is not something we can buy, or steal, or work too hard to acquire. If you work too hard at it, you end up obsessing over your own state of mind—Am I happy? ... Really though? And like love, if you have to ask, the answer is no.

So what’s the right way to think about effort and happiness? Should I be trying for “happiness” per se—or something more magnanimous, like purpose or meaning?

Or money? Is happiness actually all about money? That would be a real twist.

Few people bring the unique perspective to this mess of questions like Dan Buettner. Over the past 15 years, he has carved out a niche at National Geographic, where he travels the world in search of the healthiest people and “distills their lessons,” as he puts it, translating existential philosophy into practical information for limited-attention-span U.S. readers.

The result has been a mix of journalism, academic epidemiology, advocacy, and entrepreneurship delivered in easy-to-implement bullet points. The mix allows Buettner a certain vantage to synthesize information and see it through to the real world. After publication of his 2008 book Blue Zones: Lessons for Living Longer From the People Who’ve Lived the Longest, he launched a company of the same name that works with local communities to integrate health-based changes. I first talked to Buettner at the Aspen Ideas Festival a couple years ago, where he was one of the few people in jeans and a T-shirt. While most people there were sitting listening to interviews and panel discussions, he texted to see if I wanted to cut out and go mountain biking.

I couldn’t, because I have a job. Buettner’s job is to find and hang out with the healthiest people in the world. When we did sit down, he told me about how he was working with Gallup on finding a way to identify the statistically “happiest” people in the world. Work which was published as the third book in the series, The Blue Zones of Happiness.

With it, the graying, ever-tanned Buettner is at something of an inflection point in his career. Notable in the new pages are a shift from what started out as more traditional guru-type personal advice for longevity—drink a glass or two of wine after 5 o’clock with friends or food, eat a plant-based diet, maintain a bicycle, join a faith-based community, etc. Buettner hasn’t entirely given up on self-improvement, but he has come to believe it gets way too much emphasis. His focus now is improving our surroundings, for the same reason that “dieting” tends to fail but changing a food environment works.

I spoke with Buettner about his experiences and how his understanding of health and happiness has shifted over the years. He was about to go rollerblading. Our conversation is lightly edited and condensed.

Dan Buettner: Right away there’s a problem because, academically speaking, happiness is a meaningless term. You can’t measure happiness. It’s really a composite of things: health, emotions, the way you evaluate your life, and the extent to which you’re living out your values.

Hamblin: It sounds like you’re arguing for a reframing of the idea of “happiness” toward something bigger—an aggregate of purpose and joy and satisfaction and meaning. We’ve run pieces in the past that touch on, for example, Viktor Frankl and others who have said that life is really about pursuing meaning, and if you pursue happiness as we Americans tend to think about it, you end up going to amusement parks and shopping malls and trying to do things that are supposed to be making you happy but are sucking life out of you.

Buettner: Yes, exactly. So this was our challenge. Even though you can’t measure happiness, you can measure life satisfaction, partly by asking people, and partly by discrete questions about how much you smile or laugh or feel joy. You can also measure people’s sense of purpose, with questions like, “Do you learn new and interesting things every day? Have you used your strength to do what you do best this past week?” So for this book I worked with statisticians to run the numbers on data like this around the world. That pointed us to Singapore, Costa Rica, and Denmark as globally illustrative of facets of happiness. And so I spent a lot of time in those places, as well as a few U.S. cities, and tried to piece together explanations.

Hamblin: Did that change the way you think about happiness?

Buettner: There are two points that I make that you might not have heard elsewhere. Number one, I like the idea of thinking about happiness in the same way you think of your retirement portfolio. You want it balanced—the short term and long term, stocks and bonds. The hell-bent pursuit of purpose kind of loses the point a little bit, because there is value in the sum of positive emotions we experience every day. So if all you’re doing is pursuing your purpose, or if all you’re doing is very goal-oriented, you forgo joy today for a perceived better future. We now know that humans reliably mis-predict what will make them happy in the future. You could work your butt off, pursue your purpose, become financially independent, and get there and realize “Oh, my life sucks.”

Hamblin: I don’t want that.

Buettner: Who does? So I argue that there are a number of things you can do to enjoy your life day to day, and you ought to be putting some of your effort there.

I’m not a big believer in these positive psychology techniques of savoring or appreciation or gratitude, and not because they don’t work. I think they probably do, but for a lot of people they only work in the short run. It’s a little bit like diet. If your approach is just to cut your calories in half, you’ll lose weight. But you know within a matter of months you’ll lose focus or just quit doing it. It’s the same with trying to remember to practice gratitude. So what I argue for are statistically driven things you can do to optimize your environment so you’re more likely to be happy for the long term.

Buettner: I wish I would’ve called this book The Lazy Person’s Approach to Happiness.

Hamblin: So tell me about the ideal environment—the one where, if you set your life up right, you never have to try to be healthy or happy.

Buettner: Well, I know you’re kidding, but there are a lot of decisions you can make that will have long-term payoffs.

Financial security is also, obviously, huge. It really does deliver more happiness over time than most anything that money can be spent on—after your needs are taken care of and you maybe treat yourself occasionally. If you have money left over, you’re much better paying down your mortgage or buying insurance or signing up for an automatic savings plan than you are buying a new gadget or new pair of shoes.

Hamblin: I wrote a while ago about how behavioral economists say we should buy experiences, not things.

Buettner: Exactly. In the long-term view, you’re better off buying experiences than some new gadget. Buying things does produce some spike in joy or appreciation, but that wears off over time. A good experience actually gains luster.

Hamblin: Despite knowing that, when I actually go to spend money on traveling or even just tickets to something, I think about how soon that will be over and gone. And if I buy a couch, I have it for years.

Buettner: But the joy from the couch wears out. You’ll still flop down on it, but it won’t provide that bump of joy.

Hamblin: So then, of course, valuing experience requires spending time reflecting and thinking back, which I’m also terrible at because I’m always looking at my phone or worrying about all the things I have to do in the future.

Buettner: In Boulder, which I profile as the “happiest place in America,” there are severe limits on advertising. Boulder has no billboards at all.

Buettner: The extent to which we spend money is very much a product of our environment. If you’re constantly prompted to buy stuff, if constant marketing messages are rinsing over your psyche, you’re more likely to buy things than to spend that money more wisely on experiences or financial security. So that’s yet another way we can think about our environment shaping our happiness. Or lack thereof.

Hamblin: You spend most of your time in Minneapolis. Has all of this travel and research made you want to move?

Buettner: Minneapolis is a relatively happy place. And I split my time between Minneapolis and Santa Barbara, which is one of the happiest places. I’d live in Costa Rica in a minute. I’d live in Copenhagen. Singapore, not so much.

In the United States, the happiest places tend to be places where enlightened leaders over the past century decided to shift their focus away from just economic development and growth to quality of life. They made policies and emphasized a better life over a better business environment.

A great example of that is San Luis Obispo. In the 1970s, a mayor came in who was an architecture professor from [California Polytechnic State University]. He noticed a forest of signs downtown, and drive-through fast-food restaurants, and the highway coming through. He drove a push for aesthetics, social gathering places, and streets built for humans, not just cars. Today, San Luis Obispo routinely ranks in the top 10 happiest places in the country. It’s not a coincidence. You see the same features in Portland, Santa Cruz, Boulder—happiness is not a coincidence. There’s always an orchestration of common factors that come together to produce it.

Hamblin: Okay, but most people can’t move to San Luis Obispo because of jobs and the aforementioned importance of financial security. Even if they could, they’d have to start a social network all over again, so what can people do in their immediate environments?

Buettner: There are small things. One facet of happiness is sum of positive emotions. So I like the idea of a “pride shrine”—a place in your house that you pass a lot where you put pictures that trigger pleasant memories. Or diplomas or awards that remind you of accomplishments.

Buettner: There’s also of course research that shows that having green plants around is good. And getting your house down to one TV seems to be good, and keeping it behind doors so the act of watching is intentional instead of mindless. And a front porch is better than a back deck because the happiest people are socializing six to seven hours a day.

Hamblin: What? No. In person?

Buettner: Social media doesn’t count. I know. For every new friend you add to your social network, you’re 15 percent more likely to be happy. So surround yourself with the right kind of people. And if you think of friends sort of like long-term adventures, it kind of meets the experience-focused criterion.

And who you hang out with has a huge impact on your happiness. A lot of us accumulate friends along the way because we went to school together, or we work with them. And I never say to dump them, but proactively find happy friends who like to laugh. Humor has a measurable impact on daily happiness. So find funny friends. Or at least friends who think you’re funny, that’s big.