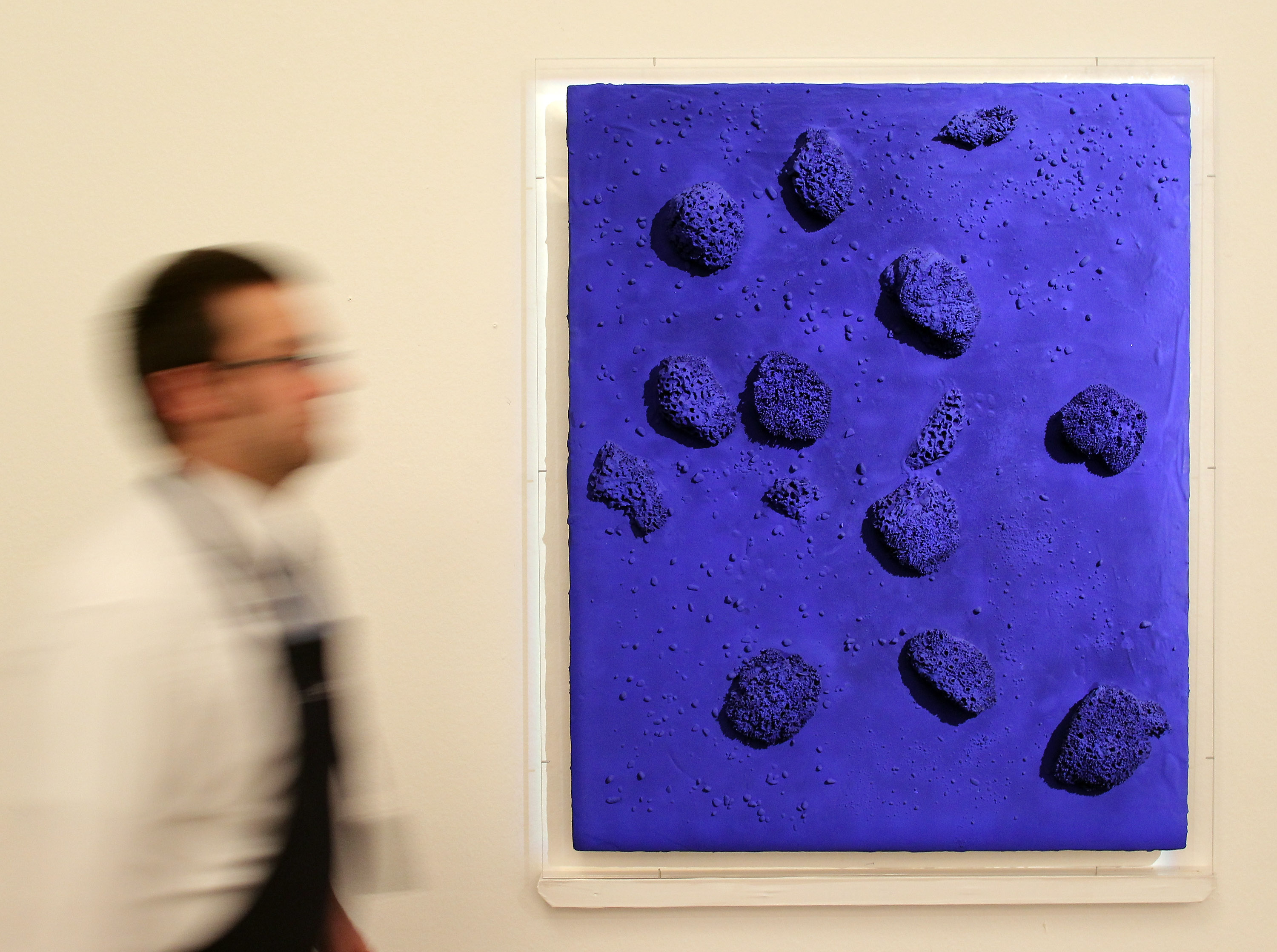 Throughout history, a variety of famous people have lent their names to shades of brilliant blue, shocking purple, grassy green, muddy brown, and other hues. While many of these figures are artists who were known for using or developing these hues, other color eponyms come from the scientists who invented them or those who loved to wear them. Consider this list the place where the history books meet the artist’s palette.

A pale azure blue named for Alice Roosevelt Longworth, daughter of Theodore Roosevelt, who was known for wearing gowns of the color and thus sparking a trend for it. (She was also known for smoking in public and other forms of mischief-making, leading her father to declare: “I can either run the country or I can attend to Alice, but I cannot possibly do both.”) Her ice-blue dresses inspired the song "Alice Blue Gown" by Joseph McCarthy and Harry Tierney, which premiered in the 1919 Broadway musical Irene. ("I once had a gown that was almost new / Oh, the daintiest thing, it was sweet Alice Blue / With little forget-me-nots placed here and there / When I had it on, I walked on air.")

The artist Yves Klein was interested in art as transcendence, and he’s perhaps best known for painting monochromes in a brilliant ultramarine meant to suggest the infinity of sea and sky. (As Klein once explained, "Blue has no dimensions, it is beyond dimensions.") In 1960, he registered a formula for the color—known as IKB, or International Klein Blue—with the French government; the formula relied on ultramarine pigment mixed with a synthetic resin that wouldn't dilute the color.

During his “blue period,” Klein exhibited only blue paintings and objects, releasing a thousand and one blue balloons into the sky in Paris to celebrate one show, and serving gin, Cointreau, and blue-dye cocktails at another. Don’t copy that last idea, mixologists: everyone who drank them peed blue for days.

A person with red hair is sometimes said to be a Titian, after the great 16th century Venetian painter who was notably fond of painting redheads. (Examples of such paintings include Bacchus and Ariadne and Noli me Tangere, now in London's National Gallery.) In the 1960s, redheaded Barbie dolls were officially known as “Titians.” More loosely, the term has come to mean any orange-red color, although people seem to love to debate exactly what shades count.

Arsenic-based green pigments were all the rage in the 19th century, coloring everything from hosiery to hats to children’s toys. The first such pigment on the scene was Scheele’s Green, discovered by Swedish chemist Carl Wilhelm Scheele in 1775. The vibrant yellow-green hue caught on, especially after it was discovered that arsenic also produced a variety of other greens, from deep emerald to pale peridot. Although Scheele and others knew how toxic these pigments were, that didn't stop the colors from being used for clothing, candles, papers, playing cards, book-bindings, and sometimes even food. In perhaps the most famous example of its use, arsenic green wallpaper graced Napoleon’s last bathroom while he suffered through his exile on St. Helena, and some think the fumes caused by his long baths may have been what killed him.

If true, this color's origin story has to be the most off-putting in history. Once used to describe the pale champagne color of certain horse coats and bird feathers, the term Isabella-colored or isabelline is said (by no less than Isaac D'Israeli's 1791 Curiosities of Literature) to come from Isabel of Austria, the devoted daughter of Philip II of Spain.

Supposedly, when Spain laid siege to the city of Ostend in 1601, Isabella vowed not to change her undergarments until the city was taken. She expected a speedy victory, but much to her dismay (and presumably that of everyone around her), the fighting continued for three years before Spain won.

The Oxford English Dictionary dismisses this origin story, noting that Isabella as a color is first noted in 1600, a year before the siege began. But linguist Michael Quinion notes that accounts in French, German, Spanish and Italian (where isabelline has a similar color meaning) refer to the earlier Queen Isabella of Castile (1451-1504) and the siege of Granada—which means the story might just be true, even if it's about a different Isabella and a different set of 7-month-old dirty underwear.

Here's a more pleasant etymology: The vivid red-purple of fuchsia, the color, comes from fuchsia, the flower, which is in turn named for 16th-century German botanist Leonhart Fuchs. (His last name, by the way, comes from the German word for "fox.") And if you think fuchsia and magenta are the same color, you're closer than you might think: Magenta was originally an aniline dye named fuchsine, named after the fuchsia flower. The name was changed in 1859, the year it was patented, in honor of the French victory at the Battle of Magenta. That apparently helped the dye become a stunning success.

This deep, warm, transparent brown was made with a high concentration of organic matter (basically: actual dirt), and was popular with the Old Masters. It was named for the innovative Flemish painter Anthony van Dyck, who often used the color in his paintings, and who also lent his name to an early photographic printing process—which also produced a brown color, but did not actually involve dirt.

Like so many scientific discoveries, the invention of synthetic dyes happened by accident. In 1856, chemistry student William Henry Perkin, then only 18, was trying to find a new way to make quinine (a popular treatment for malaria, and the ingredient that still gives tonic water its slightly bitter taste). The experiment didn't quite work as planned, but Perkin noticed some purple sludge left over in his flask after rinsing it with alcohol, and realized its potential.

His instincts were good: After Perkin patented his creation and began mass-producing it, the color swept England, becoming so popular that the magazine Punch condemned an outbreak of “the mauve measles.” The color was originally called aniline purple by Perkin, as well as Perkin's purple or Perkin’s violet. The mauve part of “Perkin’s mauve” came a few years later thanks to the French, who named it after their word for the mallow flower.

The warm, grassy "Hooker's Green" is named for botanical illustrator William Hooker (1779–1832), who created a special pigment just to convey the exact green of leaves.

OK, it’s not a color named after one person, but a color named after many people—many dead people. First made in the 16th and 17th centuries, but a special favorite of the 19th century painters, this rich brown pigment was created by mixing both human and feline mummy crumbles with white pitch and myrrh. (Although we tend to think of them as protected antiquities today, people in centuries past often considered mummies just another natural resource.)

In part because of its curious components, the pigment wasn’t the most stable in the world, and it fell out of favor once its origin story became better known. According to one biography, the Pre-Raphaelite artist Edward Burne-Jones gave his tube of Mummy Brown a funeral in his garden when he discovered where it came from. The pigment was sold into the 20th century, although if you see the name “mummy brown” used today, rest assured it contains no actual corpses. Probably.

Bess Lovejoy is a staff editor at Mental Floss, a former editor at Smithsonian.com and Schott's Almanac, and the author of Rest in Pieces: The Curious Fates of Famous Corpses.