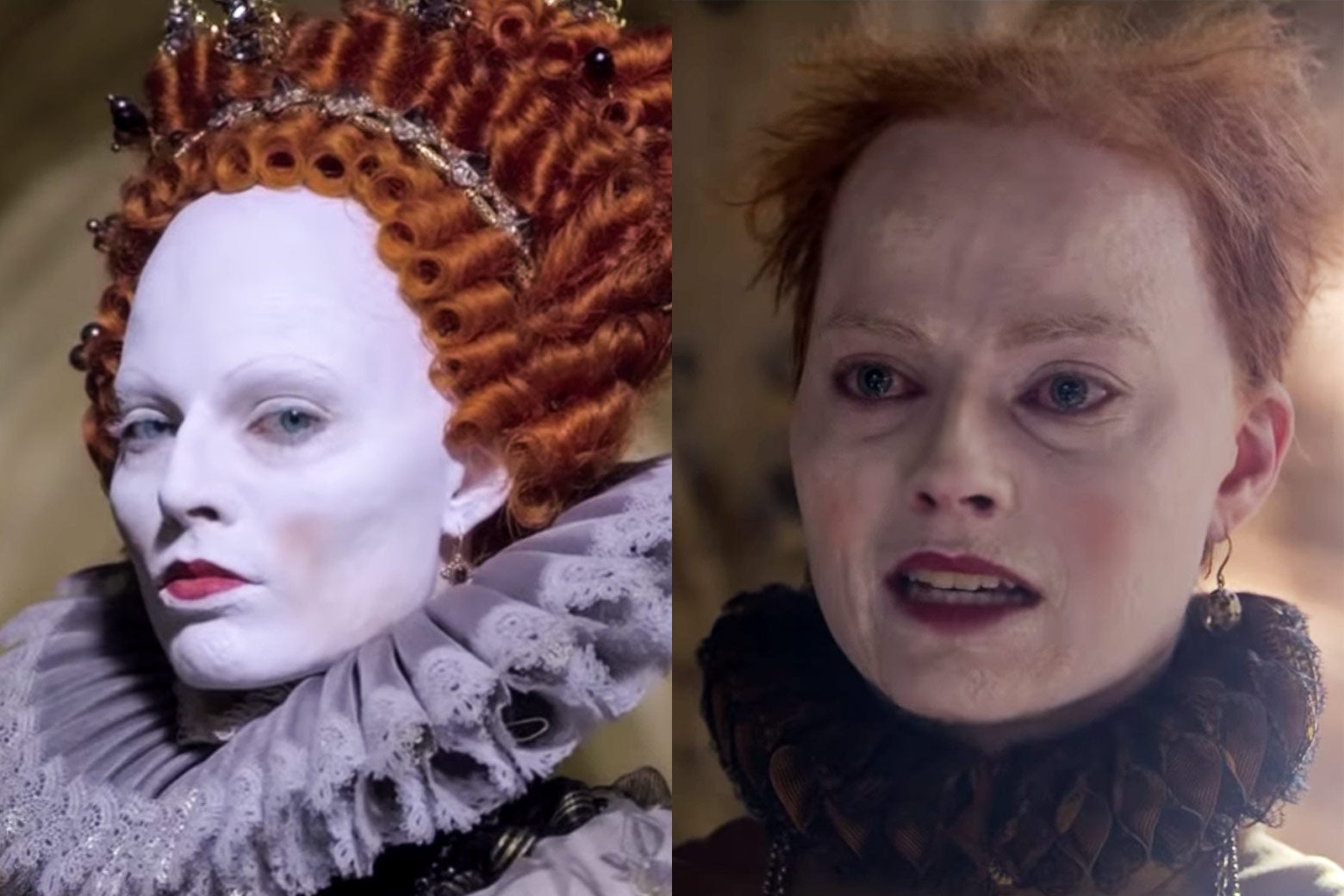 Mary Queen of Scots released at the end of 2018, featuring Saoirse Ronan as Mary and Margot Robbie as Elizabeth I. In Robbie’s Elizabeth, we get the latest filmic representation of the queen’s famous chalk-white face and bright-red wigs. Interviews with Robbie have understandably focused on the remarkable makeup and prosthetics the crew created for the actress, though not everyone loves the look—my colleague Inkoo Kang hilariously called it “perilously close to Ronald McDonald cosplay” in her review. The movie doesn’t really delve into the question of Elizabeth’s makeup directly, but her shockingly white face is a deeply woven part of the historical image of this singular queen, and it’s worth unpacking in greater detail.

In our historical memory, Queen Elizabeth I owed her clown-white face to ceruse—a form of powdered lead. Archaeologists have found traces of white lead in the graves of upper-class women who lived as far back as ancient Greece, Lisa Eldridge reports in her history of makeup. Nor were the Greeks the only ones in the ancient world to hit upon the idea of using lead to whiten. Eldridge writes that ceruse—the cosmetic powder produced via a process combining lead and vinegar—may have been in use in ancient China as early as the period of the Shang Dynasty (c. 1600–1046 B.C.)

In Europe during the Renaissance, “women in both city and country used cosmetics freely, unaffected by satires and sermons and the unfortunate effects of poisonous ingredients,” Richard Corson writes. Corson adds that ladies who could afford it sometimes applied one coat of ceruse powder on top of another—“either to avoid the trouble of removing the paint each day, or in order to fill in wrinkles.” Neck and décolletage received a coating as well. Other whitening preparations included powdered borax and sulphur, but ceruse was the most effective. The type branded “Venetian ceruse,” also called “spirits of Saturn,” was, Eldridge writes, “the most fashionable, expensive, and toxic skin whitener available in the sixteenth century”—so expensive that aristocracy (and royalty) were its major users.

When young, Elizabeth (who ruled from 1558 to 1603) was, reportedly, a naturally good-looking woman. Eldridge writes that a visitor to court when Elizabeth was 24 described her as “comely rather than handsome … tall and well-formed, with a good skin, although swarthy; she has fine eyes and above all, a beautiful hand with which she makes display.” As Eldridge points out, Elizabeth’s mother, Anne Boleyn, “was reported to have olive skin,” which accounts for the mention of “swarthiness.” But it’s hard to tell for sure what Elizabeth looked like, because, as scholar Anna Riehl argues, contemporary documents of the queen’s physical appearance—be they textual reports or artistic productions—were always partially political. People perceived a queen’s beauty as a sign of her divine right to rule. As Elizabeth’s reign proceeded, perceptions of her physical beauty and her power were ever more entangled.

Elizabethan women had their reasons for wishing to present a totally white face—the appearance of youth and fertility; conformity to an ideal of beauty that demanded women look like they never worked outside in the sun. (Despite racial undertones that read as very familiar to us today, the prioritization of whiteness in female beauty in 16th-century England seems to have had more to do with classism than racism. Contemporary sources show that anti-black racism was present in Elizabethan culture; however, as my colleague Jamelle Bouie recently wrote, refinement of the kind of widespread hierarchical racist thinking that we know today came later, during the Enlightenment.)

But Queen Elizabeth’s relationship to her own body and her presentation was even more complex. She was a female ruler and remained unmarried. Throughout her reign, there were those who questioned her right to be on the throne. The unusual fact of her queenship meant that her body was under substantial scrutiny. “The body politic of English kinship was incarnated in the natural body of an unmarried woman,” Louis Montrose writes, which “ensured that gender and sexuality were foregrounded in representing the Elizabethan state.”

During her reign, Elizabeth became an icon to worship—the Protestant object of a “royal cult” that, Montrose reports, clashed with and contested the Catholic worship of the Virgin Mary. This “cult of Elizabeth,” which emphasized her virginity and beauty, provoked a range of responses among Britons, who “sustained, elaborated, and appropriated [the cult] to their own ends” during her time in power. Living inside it all, Elizabeth clearly seemed to realize her presentation of a mask that didn’t slip was critical to her survival.

Did Elizabeth use ceruse to excess, as most every filmic representation of the queen from the 20th and 21st centuries would have us believe? Elizabeth had smallpox in 1562, which apparently left her with tell-tale pocks (or pits) on her face. The combination of her “swarthiness,” these blemishes, and the aging process (which would have been abetted by the use of the toxic lead powder) may have led her to apply yet more ceruse as time went on and her skin became more and more unsightly. That might have resulted in a clownish appearance, like Robbie’s in the latter part of the new Mary Queen of Scots. 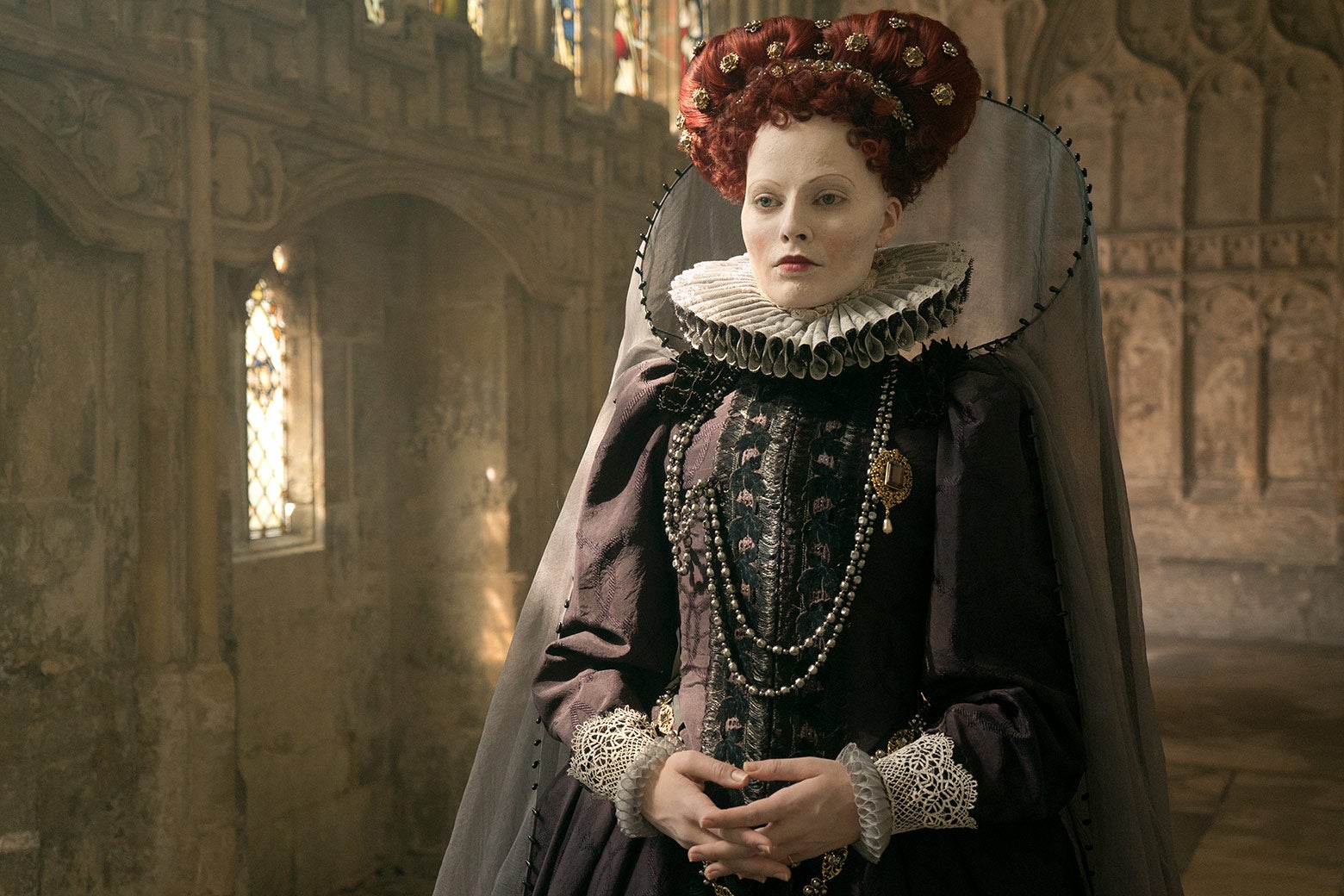 But, Anna Riehl argues, there are very few contemporary testimonies to Elizabeth’s supposed ceruse overuse. One very colorful reference from late 1600 is often repeated in later histories—the aging Elizabeth, according to this account, “was continuously painted not only all over her face, but on her very neck and breast also … the same was in some places near half an inch thick.” But this account seems to have been a street rumor, “picked up by Father Rivers, a Jesuit in hiding” during a time when Catholics (especially Jesuits) were persecuted in England. Riehl sees Rivers’ report as unlikely to be true in every detail, but historically important nonetheless because it shows how Elizabeth’s critics used her habit of “painting” against her.

Even if they didn’t directly criticize Elizabeth for it, her contemporary (male) writers hated the very existence of ceruse. Andreas de Laguna, a physician to Pope Julius III who Corson cites in his history of makeup, said the paint had been invented by the devil. Firenzuola, an Italian monk (who used a single name), published a book on ideal Renaissance beauty in 1548. Firenzuola decried use of the paint as an example of women’s ridiculousness. “These foolish maids,” he wrote, “believe that men, whom they seek to please, do not discern this foulness, which I would have them to know wears them out and makes them grow old before their time, and destroys their teeth, while they seem to be wearing a mask all the year through.”

Religious writers made the use of ceruse and other cosmetics a particular concern. Philip Stubbes’ The Anatomie of Abuses (1583) included a religious critique of cosmetics: “Thinkest thou that thou canst make thy self fairer than God who made us all? These must needs be their inventions, or else they would never go about to colour their faces with such sibbersauces.” (“Sibbersauces”! Put that obsolete synonym for “concoction” in your pocket for later.) Puritan Thomas Tuke wrote in a 1616 Discourse Against Painting and Tincturing: “A painted face is a false face.” He charged that women who used ceruse were “ugly, enormious [abnormal], and abominable,” and that one could “easily cut off a curd or cheese-cake from either of their cheeks.”

Our historical understanding of Elizabeth’s decline has been built around her thwarted vanity. Elizabeth was 69 when she died, and had been queen for 45 years. Ben Jonson wrote, 16 years after her death, that Elizabeth “never saw herself after she became old in a true glass”; according to this story, her servants painted her, and sometimes had fun by putting vermilion (a red paint) on her nose, knowing that she’d never see it. Anna Riehl wonders how true this anecdote is. Was Jonson reporting a truth or “indulging the younger generation’s frustration with an aged monarch”? Either way, Riehl sees the story as reflecting “a typical misogynistic distrust of the perceived vulnerability and waning power of the aged queen.”

How did Elizabeth die? Blood poisoning from all that white face paint she may have relied upon? Pneumonia, strep, cancer? No postmortem was performed on her body, so we will never know. By the end of her life, she had lost all her teeth and was largely incapacitated. The Royal Museums of Greenwich, on a page about the myths and mysteries that still surround Elizabeth’s death, writes that Elizabeth Southwell, one of the queen’s ladies-in-waiting, “reported that the Queen was haunted by visions of her frail body,” and that “her corpse was so full of noxious vapours that it exploded in her lead coffin.” (Dryly, the museum adds: “Southwell proved to be an unreliable source after she converted to Catholicism following the Queen’s death.”)

Southwell and Jonson aside, cultural representations of Elizabeth’s old age and death were largely kind until the second part of the 19th century, when, Michael Dobson and Nicola J. Watson write, “Elizabeth would actually be discovered as a ridiculous, if dangerous, old fraud.” Her use of cosmetics and wigs became central to this image. Writers and painters began to depict Elizabeth as a preposterous and vain old maid. Satirically represented by the writer Walter Savage Landor, she’s described as “a skinny old goshawk, all talon and plumage.” In 1848 Augustus Leopold Egg exhibited his painting Queen Elizabeth Discovers She Is No Longer Young, a re-creation of a supposed incident when the old queen looked in a mirror for the first time in years. Dobson and Watson describe the painting as “punitive,” a work of art that crystallizes “the Victorians’ unprecedented preoccupation with Elizabeth’s old age.” 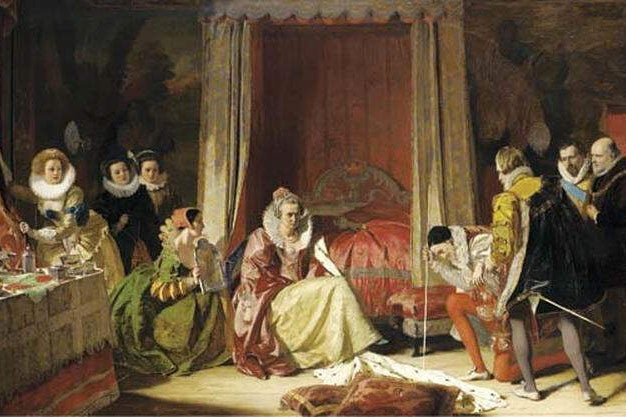 Dobson and Watson write that this new representation of Elizabeth as a decaying woman was also a critique of the monarchy. “By destroying Elizabeth’s magical agelessness, a central component of contemporary nationalist Elizabethan nostalgia,” Egg’s painting made a commentary on England’s current state. Even children’s books in the Victorian period used Elizabeth’s vanity to teach a moral lesson. “With all her courage,” children’s magazine Bow Bells wrote, “ ‘good Queen Bess’ had not strength of mind to look her wrinkles in the face.”

Yet some—be it out of royalist sentiment or gallantry—continued to defend Elizabeth. Dobson and Watson point to writer Charles Kingsley, who argued in 1855: “Men had accepted [Elizabeth’s youthful beauty] as what beauty of form and expression generally is, an outward and visible sign of the inward and spiritual grace; and while the inward was unchanged, what wonder if she tried to preserve the outward? If she was the same, why should she not try to look the same?”

Lead powder remained in use through the 19th century, when Eldridge writes that “the rise of women’s journals meant that women shared their findings and became more savvy about potentially harmful whiteners like arsenic and lead.” But some women didn’t get the message. Historian Kathy Peiss writes that a 19th-century American doctor reported in a medical journal the case of “Mary C.,” a housewife in St. Louis who used a commercial skin lightener, sold as “Laird’s Bloom of Youth,” for years, before being admitted to a hospital in 1877 with her arms paralyzed. This patient eventually died of lead poisoning; the doctor, Peiss writes, “condemned women’s vanity as he exposed a dangerous commercial product.”

The use of lead in cosmetics seems like a preposterous relic of history now. But lead powder, whether used by Elizabeth (in myth or truth) or the American Mary C., was an expensive product that slowly sapped women’s strength, even as it promised an extension of their meager power. In that, it’s painfully familiar.

Rebecca Onion is a Slate staff writer and the author of Innocent Experiments.