Not long ago I diagnosed myself with the recently identified condition of sidewalk rage. It’s most pronounced when it comes to a certain friend who is a slow walker. Last month, as we sashayed our way to dinner, I found myself biting my tongue, thinking, I have to stop going places with her if I ever want to … get there!

You too can measure yourself on the “Pedestrian Aggressiveness Syndrome Scale,” a tool developed by University of Hawaii psychologist Leon James. While walking in a crowd, do you find yourself “acting in a hostile manner (staring, presenting a mean face, moving closer or faster than expected)” and “enjoying thoughts of violence?”

Slowness rage is not confined to the sidewalk, of course. Slow drivers, slow Internet, slow grocery lines—they all drive us crazy. Even the opening of this article may be going on a little too long for you. So I’ll get to the point. Slow things drive us crazy because the fast pace of society has warped our sense of timing. Things that our great-great-grandparents would have found miraculously efficient now drive us around the bend. Patience is a virtue that’s been vanquished in the Twitter age.

Once upon a time, cognitive scientists tell us, patience and impatience had an evolutionary purpose. They constituted a yin and yang balance, a finely tuned internal timer that tells when we’ve waited too long for something and should move on. When that timer went buzz, it was time to stop foraging at an unproductive patch or abandon a failing hunt.

We now insist that Web pages load in a quarter of a second, when we had no problem with two seconds in 2009 and four seconds in 2006.

“Why are we impatient? It’s a heritage from our evolution,” says Marc Wittmann, a psychologist at the Institute for Frontier Areas of Psychology and Mental Health in Freiburg, Germany. Impatience made sure we didn’t die from spending too long on a single unrewarding activity. It gave us the impulse to act.

But that good thing is gone. The fast pace of society has thrown our internal timer out of balance. It creates expectations that can’t be rewarded fast enough—or rewarded at all. When things move more slowly than we expect, our internal timer even plays tricks on us, stretching out the wait, summoning anger out of proportion to the delay.

“The link between time and emotion is a complex one,” says James Moore, a neuroscientist at Goldsmiths, University of London. “A lot is dependent on expectation—if we expect something to take time then we can accept it. Frustration is often a consequence of expectations being violated.”

Make no mistake: Society continues to pick up speed like a racer on Bonneville Speedway. In his book, Social Acceleration: A New Theory of Modernity, Hartmut Rosa informs us that the speed of human movement from pre-modern times to now has increased by a factor of 100. The speed of communications has skyrocketed by a factor of 10 million in the 20th century, and data transmission has soared by a factor of around 10 billion. 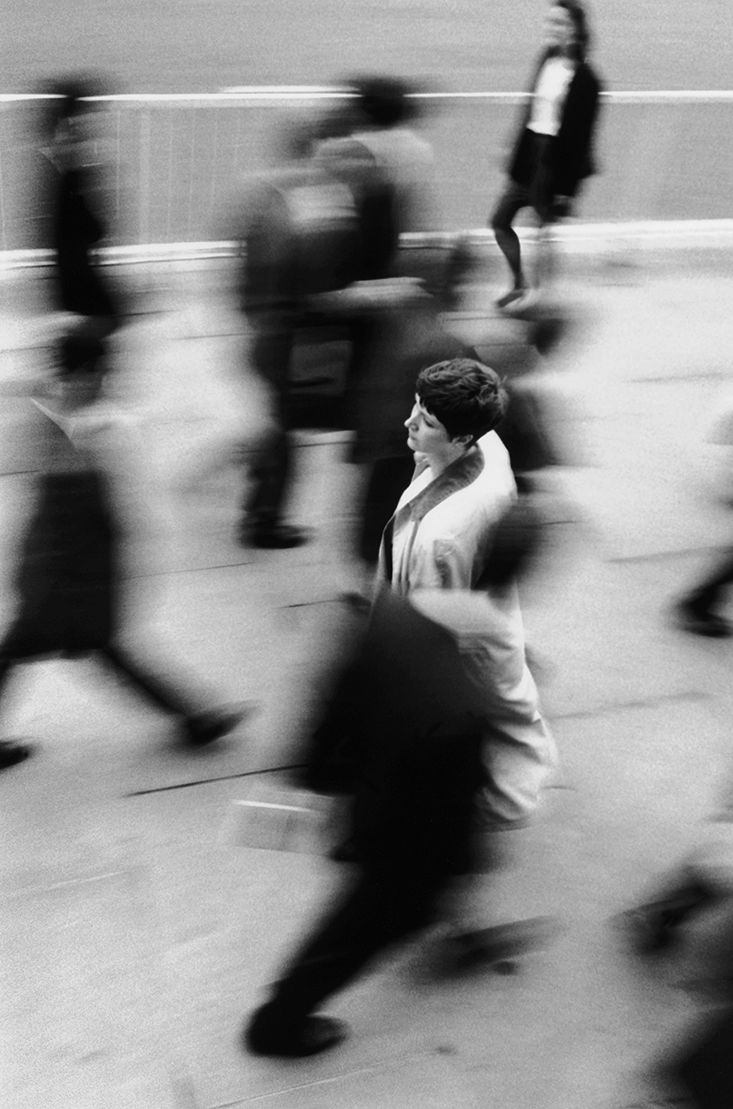 A down-to-earth gauge was established by psychologist Robert Levine in the early 1990s, when he sent his students around the world to take the pulse of 31 large cities. They timed random people as they walked over a distance of 60 feet. In Vienna, Austria, where I live, pedestrians covered the ground in a respectable 14 seconds. But in my former home of New York, pedestrians zoomed by in 12 seconds. In the 2000s, psychologist Richard Wiseman found worldwide walking speeds had gone up by 10 percent.

The pace of our lives is linked to culture. Researchers have shown society’s accelerating pace is shredding our patience. In tests, psychologists and economists have asked subjects if they would prefer a little bit of something now or a lot of it later; say, $10 today versus $100 in a year, or two pieces of food now versus six pieces in 10 seconds.

Subjects—both human and other animals—often go for the now, even when it’s not optimal. One study showed that exposing people to “the ultimate symbols of impatience culture”—fast-food symbols like McDonald’s golden arches—increases their reading speed and preference for time-saving products, and makes them more likely to opt for small rewards now over larger ones later.

Our rejection of slowness is especially apparent when it comes to technology. “Everything is so efficient nowadays,” Wittmann says. “We’re less and less able to wait patiently.” We now practically insist that Web pages load in a quarter of a second, when we had no problem with two seconds in 2009 and four seconds in 2006. As of 2012, videos that didn’t load in two seconds had little hope of going viral.

Of course, we’re not going to die if a website doesn’t load immediately. But in what is probably a hangover from our primate past—when we could starve if impatience didn’t spur us to act—it sure can feel like it. “People expect the payoff to come at some kind of rate, and when it doesn’t come, this creates annoyance,” posits evolutionary anthropologist Alexandra Rosati, a primate expert, who is finishing a postdoc at Yale before joining the faculty at Harvard.

The result is a less-than-virtuous cycle. The accelerating pace of society resets our internal timers, which then go off more often in response to slow things, putting us in a constant state of rage and impulsiveness. Your mileage may vary, of course, but overall, “we are getting to be a more and more impulsive society,” Wittmann says.

Recent research points to a possibility that could make this cycle worse. As my slow-walking friend and I strolled at a snail’s pace down the street, I started to fear that we would be so late for our reservation that we would miss it. But when we got to the restaurant, we were no more than a couple minutes behind. My sense of time had warped.

Why? Rage may sabotage our internal timer. Our experience of time is subjective—it can fly by in a flash, or it can drag out seemingly forever. And strong emotions affect our sense of time most of all, explains Claudia Hammond in her 2012 book Time Warped: Unlocking the Mysteries of Time Perception. “Just as Einstein’s theory of relativity tells us that there is no such thing as absolute time, neither is there an absolute mechanism for measuring time in the brain,” she writes.

Can we stave off the slowness rage and revive patience? We need to find a way to reset our internal timers and unwarp time.

Time stretches when we are frightened or anxious, Hammond explains. An arachnophobe overestimates the time spent in a room with a spider; a fearful novice skydiver, the time spent hurtling to Earth. People in car accidents report watching events unfold in slow motion. But it’s not because our brains speed up in those situations. Time warps because our experiences are so intense. Every moment when we are under threat seems new and vivid. That physiological survival mechanism amplifies our awareness and packs more memories than usual into a short time interval. Our brains are tricked into thinking more time has passed.

On top of that, our brains—in particular, the insular cortex, linked to motor skills and perception—may measure the passing of time in part by integrating many different signals from our bodies, like our heartbeats, the tickle of a breeze on our skin, and the burning heat of rage. In this model, the brain judges time by counting the number of signals it is getting from the body. So if the signals come faster, over a given interval the brain will count more signals, and so it will seem that the interval has taken longer than it actually has.

“We don’t have a specific clock in the brain ticking away, but we have the constant and ongoing feeling of our body, which is refreshed every second, and we use this as information when we ask ourselves how much time in the range of seconds has passed,” Wittman says. When we’re frightened—as well as anxious or unhappy—our bodies send more of these signals to the brain, which counts more seconds than it should. Ten seconds feel like 15; an hour feels like three.

The rush of society may affect our sense of timing and emotions in another way. Neuroscientists like Moore have shown that time seems to pass faster when we have a direct connection to a subsequent event, when we feel we’ve caused a particular outcome. They call the experience “temporal binding.” Conversely, says Moore, “When we have, or feel we have, no control over events, the opposite happens: The internal clock speeds up, meaning we experience intervals as longer.”

Can we stave off the slowness rage and revive patience? It’s possible. But we need to find a way to reset our internal timers and unwarp time. We can try willpower to push back our feelings, but that only goes so far. All you have to do is watch chimps in lab experiments. When waiting for delayed rewards, even by their own choice, Rosati says, “they do things like exhibit negative vocalizations. They scratch, which is a sign of stress for primates, and they maybe bang the wall, sort of a temper tantrum.” Those chimps are your brain on waiting.

There’s another downside to the willpower approach. Using our willpower for one thing seems to make us more susceptible to the next temptation, says Northeastern University psychologist David DeSteno, who admits to being “the guy that sighs in the Starbucks line.” If he uses all of his self-control to stay silent in line, he might give in to a craving for a Double Chocolate Chunk Brownie when he gets to the front.

Research has shown meditation and mindfulness—a practice of focusing on the present—helps with impatience, although it’s not entirely clear why. It could be meditators are better able to cope with the emotional fallout of impatience because they’re more used to it.

People who meditate “make friends with uncomfortable space,” says Ethan Nichtern, a New York City-based senior meditation teacher in the Shambhala Buddhist tradition, and author of the forthcoming The Road Home: A Contemporary Exploration of the Buddhist Path. Meditation provides “a technique for just meeting the present moment as it is, without trying to change the situation.”

However, says DeSteno, regular meditation practice isn’t something impatient people are likely to practice. He suggests fighting emotion with emotion. He has found that gratitude is a mental shortcut to more patience. In one study, he found that people who did a short writing exercise about something for which they were grateful were more willing to forego smaller rewards now for bigger rewards later. Counting your blessings—even if they have nothing to do with the delay at hand—may remind you of the value of being a member of a cooperative human society and the importance of “not being a jerk,” DeSteno says.

That’s something I can try. On a recent stroll with my slow-walking friend, I find gratitude is easy to muster. I think fondly of her charming sense of humor, our fun outings, her support during tough times. As we walk, languidly, to a restaurant, I feel momentarily free of my sidewalk rage. Could I really fix this maladapted mechanism so easily? Yet as this warm feeling passes over me in the restaurant, I begin quietly raging at the server, the kitchen, the return tram. I’m even raging at my rage; it feels like it’s lasting forever.

Next time, I better just entertain at home.

Chelsea Wald is a freelance science writer based in Vienna, Austria. Locals know her as the one “presenting a mean face.”