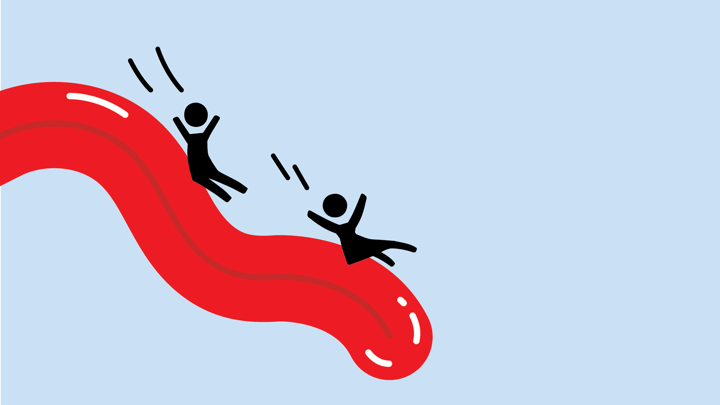 I recently had the honor of meeting an award-winning literary sort, a man wry and restrained and overall quite utterly mature, who casually referred to having gone through a phase in his 20s when he’d been “pilly”—that is, when he’d taken a lot of recreational drugs. The word had a wonderfully childish sound to it, the tacked-on y creating a new adjective in the style of happy, angry, and silly. My writer-acquaintance, I recognized, was not alone in bending language this way. On the sleeper-hit sitcom Schitt’s Creek, for instance, one of the protagonists, David, speaks of a game night getting “yelly,” while his sister describes a love interest as “homelessy.” Meanwhile, back in real life, one of my podcast listeners informed me of a Washington, D.C., gentrifier who declared that a neighborhood was no longer as “shooty-stabby” as it once had been.

Pilly and its counterparts are not just charming, one-off neologisms; they’re signs of a broader shift in how Americans nowadays are given to putting things. More and more, adults are sprinkling their speech with the language of children. Young kids tend to simplify language, leaving out verbs (“Daddy home!” a toddler might say as her father walks in) or using words in incorrect but intelligible ways—plurals like feets and deskses are common; my daughter, at age 3, described herself as “a talky kind of a person.” The adoption of some of these linguistic tics by adults—in the form of pilly and many other terms—has given rise to a register we might call kidspeak. It’s a new way of sounding “real,” with a prominence that would challenge a time traveler from as recently as the year 2000.

Examples of kidspeak are everywhere, once you start to look. Take our newfangled use of the word because, as seen in sentences such as I believe in climate change because science and You’re reading this article because procrastination. Even 10 years ago, such constructions would have sounded like a clear grammatical error from someone still learning to speak English; today, they have become so widespread that the American Dialect Society crowned because 2013’s Word of the Year. The rhetorical appeal is easy to see: Stripped of its of, because transforms from a way of elucidating one’s case to a puckish refusal to do so. It helps its speaker hide behind the authority of the x—and avoid all the messiness of actual argument. In many ways, it channels the stubbornness of the little boy who asserts nothing more than “Because!” when he’s asked why he scribbled on the wallpaper with a Sharpie.

Or have you noticed that, to convey emphasis or surprise, many young women have begun appending an uh to their sentences? “No-uh!” “Move-uh!” “It’s for you-uh!” Most adults would recognize this as a habit small children typically outgrow by middle school, but women have begun retaining it in adulthood—one can catch it everywhere from the speaking style of the comedian Aubrey Plaza to the local Chipotle. That women have started the trend is unsurprising, as women usually introduce new constructions into a language. Before long, research shows, men tend to catch on.

Then there are exclamations like I’ve had all the illnesses!, which one delightfully droll student of mine recently told me after I asked why she’d missed class; another student told me that his father, a veteran bird-watcher, has seen “all the birds.” This phrasing dates back to a 2010 comic strip by the artist Allie Brosh, in which her character seeks, with ingenuous ambition and little result, to clean “all the things!” It reflects the cutely narrow view of the child who recounts to us specificities of her life, assuming that we, as adults, must be already knowledgeable about them: “At the park, we were doing the jump game and Michael told us we couldn’t take turns until the Juicy Loops were gone!” (What’s the jump game? The Juicy whats? And who’s Michael?)

Clearly, kidspeak affords its users certain rhetorical advantages—the way it playfully softens blows is part of why younger people on social media now often couch what they say to one another in the toddler-esque. But what made bright teenagers and 20-somethings start imitating 5-year-olds in the first place? And why are many older Americans following suit?

The slang of earlier decades offers some clues. The 1920s gave rise to the bee’s knees, know your onions, and be yourself! (meaning “calm down”)—phrases that were less childish than jaunty, cocky, pert. The 1930s and ’40s brought “hep” slang like reet for “right” and chops for “ability.” In the 1990s, veggies jumped from the lips of mothers spoon-feeding their infants to the menus of pricey organic restaurants.

Perhaps no era’s slang more closely resembles the kidspeak of today than that of 1970s America—a time of linguistically jolly childishness that gave us words and phrases like to boogie, warm fuzzies, space cadet, and far out. The parallel isn’t so surprising when you consider the tumult of those times: the Vietnam War, Watergate, stagflation, the energy crisis. After an interregnum of relative prosperity and peace, gloomy sentiments have returned with a new force, thanks to the wars in Iraq and Afghanistan, the financial crash of 2008, the looming collapse of the environment, and the rise of a dangerous superannuated adolescent to the country’s highest office. The horrors of the real world are enough to make a person seek the safety of childhood by any means, including linguistic ones.

Moreover, young people today are afraid in ways that generations before them were not. They’re also facing new, compounding economic hardships—many Millennials and older members of Gen Z depend on their parents to help cover exorbitant rents or student-loan payments. Surveys confirm intuition here: A pair of 2016 studies led by April Smith, a psychology professor at Miami University, in Ohio, showed that over the past few decades, young people have become newly fearful of reaching adulthood, agreeing more and more with statements such as “I wish that I could return to the security of childhood” and disagreeing with ones such as “I feel happy that I am not a child anymore.” Is it any wonder that another example of today’s kidspeak is referring to grown-up activities with the ironically distancing term adulting?

Given the magnitude of recent social and political unrest, not seeing the upheaval reflected in language would have been surprising. And social media have only quickened the pace of change. What 50 years ago might have been a ripple among people in one city now permeates the nation; as marvelous as Brosh’s “all the things!” cartoon is, no 1970s-era technology would have enabled a self-published comic strip to attain international reach and coin a new idiom.

A generation understandably spooked by “adulting” may well embrace the linguistic comfort food of childlike language. And once established, the habit can easily make the jump to those of us more advanced in years. After all, a kid lurks inside every one of us, and few people are immune to the sheer infectiousness of creativity. Young people are the primary drivers of language change, but even we “olds”—as the young are wont to put it—like to change things up now and then. (We’re old, not dead.) As new slang creeps across generational divides, however, it inevitably stirs up people’s deepest linguistic anxieties. Does the new trend of kidspeak represent a dumbing-down of the English language—and of American society as a whole? Just the opposite: With the rise of kidspeak, we are actually witnessing English’s enrichment.

It has long been ordinary for one language to borrow from another (schadenfreude, hara-kiri), and even from a dialect of the same language: Black English has lent mainstream English words like diss and the “angry” meaning of salty. Kidspeak extends our word stock in exactly the same way that Old Norse, French, and Latin once did. On the internet, for example, kidspeak refers to a “smol kitty” and a “smol baby,” but not a “smol mailbox” or “smol Blu-ray player.” Smol, then, is not merely a way of spelling small, but a more specific term referring to diminutive cuteness. Just missing out on becoming Word of the Year at the American Dialect Society’s 2019 meeting was the monosyllabic yeet, seemingly meant to mimic the sound of something being thrown into a container or through a net (and often pronounced with a celebratory gesture to that effect). One now speaks of “yeeting” an empty can into the trash, and the word has even developed an irregular past-tense form, yote. We have kidspeak to thank for introducing these new layers of playfulness and subtlety into our repertoire.

English today is arguably more fertile than it’s been since Shakespeare’s time, and those itchy about the novelty of kidspeak might consider that not so long ago pedants were insisting the proper person should say “bal-coh-nee” for balcony, stamp out “nonwords” such as standpoint, and use obnoxious to mean “ripe for injury.” Their arguments failed miserably when presented to everyday speakers, who tend to have good intuition about how language should work.

Amid today’s dreadful news cycles, the emergence of kidspeak is something to celebrate. This new slang is a totally natural and endlessly witty collective advancement of the American idiom, wielded selectively and with a fundamental irony by people fully in command of the standard language forms. It makes for more interesting, nuanced talk. I, at least, am glad to be living with the English of right now, surrounded by all the new words.

John McWhorter is a contributing writer at The Atlantic. He teaches linguistics at Columbia University, hosts the podcast Lexicon Valley, and is the author, most recently, of Words on the Move.