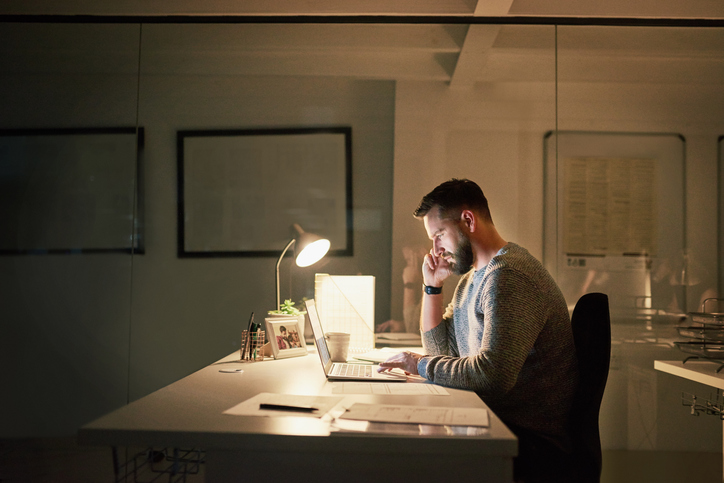 In today's world, the early risers are celebrated. Nearly everything in this world is structured to suit those who sleep early and wake up with the sun. This indoctrination of needing to be an early riser starts as a little kid with our parents harping on us to go to sleep.

It's centuries-old: Ben Franklin famously believed that "early to bed, early to rise" was ideal. This notion of everyone going to sleep early and feeling refreshed in the morning is, unfortunately, a fantasy.

As someone who sees the issues of sleep deprivation up close, I can tell you that the rate of inadequate sleep among entrepreneurs and top performers is steadily rising. According to a 2016 Rand study, inadequate sleep is costing the U.S. more than $400 billion in economic losses which are leading to 1.23 million days of lost work annually.

A big reasoning for this astronomical number is that society in large hasn't accepted nor adjusted to the notion that everyone isn't an early riser. As one New York Times column pointed out, the modern workplace and society at large are rapidly undergoing a transformation--with more late-night coders, digital nomads, freelancers, and remote workers.

In this new landscape, it's important for entrepreneurs and leaders to be aware of their chronotype: your unique biological clock that controls your body's rhythms. We all have the same 24 hours in a day, but each of us are at our best at different times during that period. According to Dr. Matthew Walker, author of Why We Sleep:

"Around 40 percent of the population are morning people, 30 percent are evening people, and the reminder lies in between. Night owls aren't owls by choice. They are bound to a delayed schedule by unavoidable DNA hard wiring. It's not their conscious fault, but rather their genetic fate."

To further squash the notion that night owls are lazy, The Rockefeller University discovered a gene mutation last year that may disrupt your body's internal circadian clock, leading to the development of DSPD (Delayed Sleep Phase Disorder).

The days of needing to justify your late night habits or feel guilty about it are over. This doesn't mean you can do whatever you want--if poorly managed, you can still wake up with excessive grogginess and lethargy. To maximize your specific chronotype and productivity, implement these three habits:

1. Schedule your day around your energy.

Energy is your most valuable currency. It's pivotal to know that there are natural peaks and valleys to your daily energy levels. If you're a night owl, you need to leverage your day in a way that coincides with this type of rhythm.

From the night owls that I've talked to and worked with, creating a schedule that lets you do deep work at night is an obvious one. However, another peak for many night owls tends to be mid-morning after being awake for a few hours.

2. Have a routine that helps you wind down.

The challenge at night is that it's hard to wind down. This can lead to highly inefficient days down the line due to an inconsistent schedule. A good way to ensure quality sleep is to set a cutoff time for activity and light exposure.

Stopping your work activities at least 60 minutes before bed will help turn off your work mindset, and limiting light exposure at night is important since it can help you manage your melatonin levels (your "sleep hormone"). It's unrealistic to avoid light if you're working on your screen, so investing in some blue-blocking glasses could work wonders.

3. Stay consistent with your sleep and wake times.

In March 2017, Fitbit started anonymously tracking users' sleep stages and ended up with six billion nights of sleep for data collected. Its biggest takeaway: You should consistently go to sleep around the same time every night.

If you keep your body on a consistent schedule, you'll keep your biological clock on one. When your sleep schedule is all over the place, you're more likely to wake up groggy, lethargic, and an unpleasant person to be around.

With the sleep crisis ever-growing, the answer isn't merely to tell people to go to sleep. It's to recognize the value in different types of sleep--and recognize what's healthiest for you.