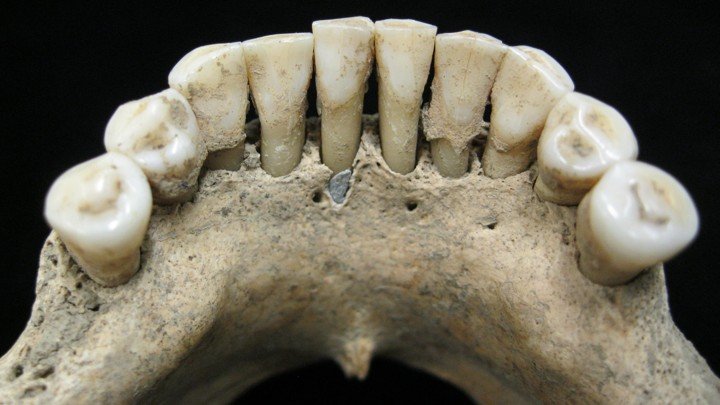 This set of teeth had a secret hidden in the tartar. Photo by Christina Warinner.

What Anita Radini noticed under the microscope was the blue—a brilliant blue that seemed so unnatural, so out of place in the 1,000-year-old dental tartar she was gently dissolving in weak acid.

It was ultramarine, she would later learn, a pigment that a millennium ago could only have come from lapis lazuli originating in a single region of Afghanistan. This blue was once worth its weight in gold. It was used, most notably, to give the Virgin Mary’s robes their striking color in centuries of artwork. And the teeth that were embedded with this blue likely belonged to a scribe or painter of medieval manuscripts.

Who was that person? A woman, first of all. According to radiocarbon dating, she lived around 997 to 1162, and she was buried at a women’s monastery in Dalheim, Germany. And so these embedded blue particles in her teeth illuminate a forgotten history of medieval manuscripts: Not just monks made them. In the medieval ages, nuns also produced the famously laborious and beautiful books. And some of these women must have been very good, if they were using pigment as precious and rare as ultramarine.

If pigments can be preserved in tartar—the gunky yellow stuff on teeth that dental plaque hardens into—that means that fibers, metals, and other dyes could be, too. “This is genuinely a big deal,” says Mark Clarke, a technical art historian at Nova University Lisbon who was not involved in the new study. You could imagine identifying metalworkers, carpenters, and other artisans from the particles embedded in tartar, Clarke says. “It’s opening up a new avenue in archaeology.”

Radini and her co-author, Christina Warinner, did not set out to study the production of illuminated manuscripts. Radini, now at the University of York, was initially interested in starch granules in tartar as a proxy for diet, and Warinner, a microbiome researcher at the Max Planck Institute, wanted to study the DNA of ancient oral bacteria. But the blue particles were too striking to ignore. 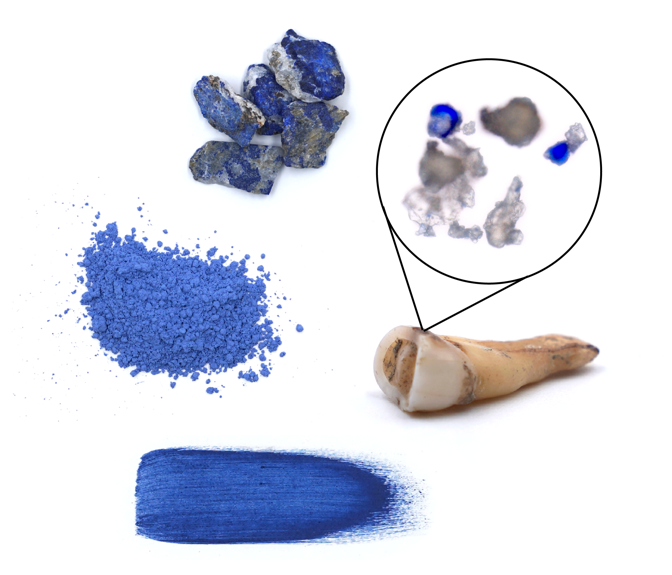 The semiprecious rock lapis lazuli is ground up to create a pigment called ultramarine, tiny particles of which can be found in dental tartar. Photo by Christina Warinner.

“Can you imagine the kind of cold calls we had to make in the beginning?” says Warinner. “‘Hi, I’m working with this thing on teeth, and it’s about 1,000 years old, and it has blue stuff in it. Can you help me?’ People thought we were crazy. We tried reaching out to physicists, and they were like, ‘I don’t know what you’re talking about.’ We tried reaching out to people working in art restoration, and they were like, ‘Why are you working with plaque?’” She eventually reached physicists at the University of York who helped confirm the blue did indeed come from the mineral lazurite, derived from lapis lazuli.

But art experts were still skeptical. Some dismissed the idea that a woman could have been a painter skilled enough to work with ultramarine. One suggested to Warinner that this woman came into contact with ultramarine because she was simply the cleaning lady.

Warinner eventually reached out to Alison Beach, a historian at Ohio State University who studies female scribes in 12th-century Germany. Over the past couple of decades, Beach and other scholars have cataloged the overlooked contributions of women to medieval book production. The challenge, Beach says, is that while most manuscripts with signatures are signed by men, the vast majority of manuscripts are unsigned. But a small number of surviving manuscripts are signed by women, and scholars have found correspondence between monks and nuns about book production.

Beach even came across a letter dated to the year 1168, in which a bookkeeper of a men’s monastery commissions sister “N” to produce a deluxe manuscript using luxury materials such as parchment, leather, and silk. The monastery where sister “N” lived is only 40 miles from Dalheim, where the teeth with lapis lazuli were found. Beach also identified a book using lapis lazuli that was written by a female scribe in Germany around a.d. 1200. The pigment would have traveled nearly 4,000 miles from Afghanistan to Europe via the Silk Road. All the evidence suggests that female scribes were indeed making books that used lapis lazuli pigment in the same area and around the same time this woman was alive. 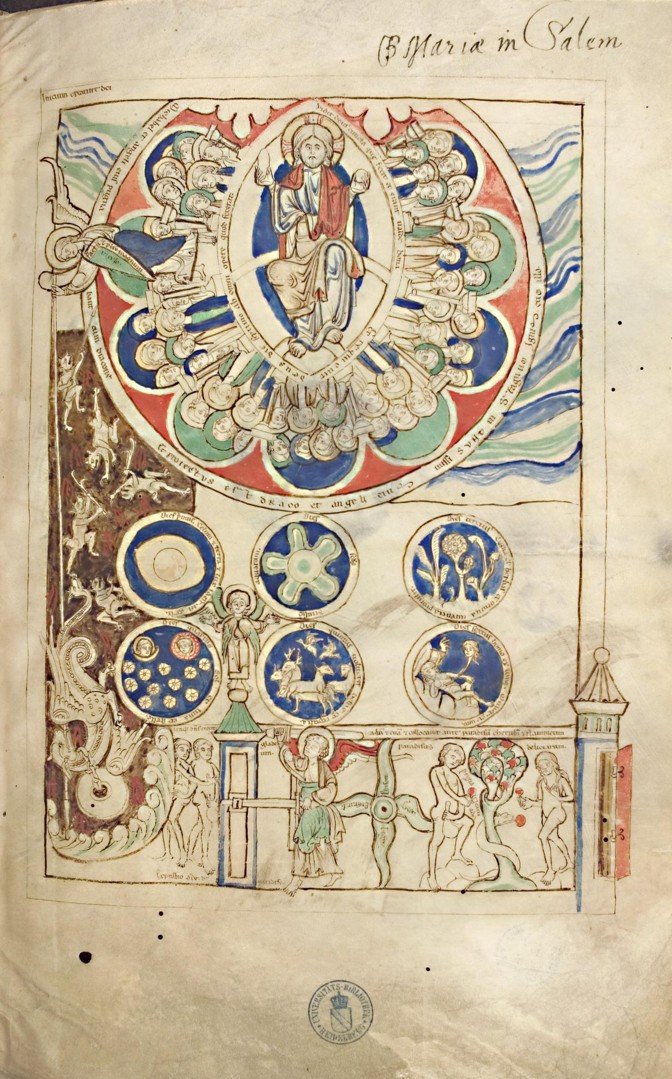 An illuminated page from the Scivias, a 12th-century book written by the nun Hildegard of Bingen and painted by two anonymous artists. The blue pigment comes from lapis lazuli. Photo from the Heidelberg University Library / Cod. Sal. X,16 / page 2r.

The team considered a number of alternative ways lapis lazuli could have gotten into the woman’s dental plaque. Could the particles have come from repeated kissing of an illuminated manuscript? This practice didn’t become popular until three centuries after this woman likely died. Could it have come from lapis ingested as medicine, as suggested in Greek and Islamic medical texts? There’s little evidence that prescription was followed in 12th-century Germany. The lapis lazuli particles were also especially fine, which requires a laborious grinding process. This detail in particular suggests that the stones were purposefully made into pigment.

The team concluded that two scenarios are most likely: The woman was a painter who could have ingested ultramarine paint while licking her brush to a point, or she breathed in the powder while preparing pigment for herself or someone else. You can almost begin to picture her, Beach says, sitting by herself laboring over a manuscript day after day. “For a medieval historian,” she adds, “this kind of clear material evidence of something from the life of an individual person is so extraordinary.”

Cynthia Cyrus, a professor at Vanderbilt who has also studied medieval scribes, told me that reading the paper was “the highlight of my day.” Like many monasteries, she noted, the one where this woman was buried was eventually destroyed in a medieval fire. There’s little evidence of what life was like there. But the woman’s teeth suggest that it could have been a site of highly skilled book production.

Warinner is continuing to study the particles embedded in old tartar. She and others have found everything from insect parts and the pollen of exotic ornamental flowers to opium, bits of wool, and milk proteins—all of which tell stories about what people ate and how they lived. The detritus of everyday life accumulates in the gunk that modern dentists are so vigilant about scrubbing off. “They aren’t thinking of future archaeologists,” Warinner jokes.