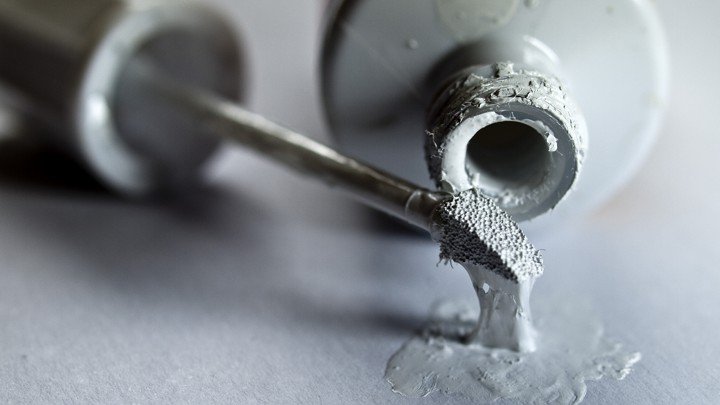 Christmastime is when the pens in my house get their biggest workout of the year. Like many Americans above grammar-school age, I seldom write by hand anymore, outside of barely legible grocery lists. But the end of the year brings out a slew of opportunities for penmanship: adding notes to holiday cards to old friends, addressing them, and then doing the same with thank-you notes after Christmas. And given how little I write in the other 11 months of the year, that means there are a lot of errors, which in turn spur a new connection with another old friend: Wite-Out.

The sticky, white fluid and its chief rival, Liquid Paper, are peculiar anachronisms, throwbacks to the era of big hair, big cars, and big office stationery budgets. They were designed to help workers correct errors they made on typewriters without having to retype documents from the start. But typewriters have disappeared from the modern office, relegated to attics and museums. Even paper is disappearing from the modern office, as more and more functions are digitized. But correction fluids are not only surviving—they appear to be thriving, with Wite-Out sales climbing nearly 10 percent in 2017, according to the most recent public numbers. It’s a mystery of the digital age.

One sign of the cultural impact of the Wite-Out brand is that, like Kleenex, it has become a generic term. But it wasn’t the first. Liquid Paper dates back to the 1950s, when Bette Nesmith Graham, a struggling divorced mother, took on typing jobs to make money. The problem was that she wasn’t a good typist, and kept making mistakes. So she began experimenting with ways to cover up errors, enlisting her son Mike to help her. (This creative streak would help Mike in his career as an artist—first as a member of the Monkees, and later as a producer of films including Repo Man.) In 1958, she patented Liquid Paper.

There were other products that achieved the same goal, such as strips of sticky paper that covered up errors, but Liquid Paper quickly eclipsed them—so much so that it soon drew imitators. In 1965, Tipp-Ex began producing its own fluid in Germany. A year later, George Kloosterhouse and Edwin Johanknecht, searching for a product that wouldn’t show up when a document was photocopied, developed Wite-Out.

It’s difficult for anyone raised in the age of computers to grasp how useful correction fluids must have been when typewriters were a dominant technology in offices and classrooms. Of course, correction fluids are useful for things other than typewriting. In the pre-laser-printer era, it was often easier to correct a document from a dot-matrix printer by hand than to reprint it. Handwritten documents in ink are also more easily corrected with Wite-Out than rewritten.

But today, even printer sales are down, casualties of an era when more and more writing is executed on-screen and never printed or written out at all. In fact, the office-supply industry as a whole is slumping. According to a report by the analysis firm Technavio, the U.S. stationery and office-supply market is essentially flat, projected to go from $86.4 billion in 2015 to $87.5 billion by 2018. The paper industry has had it especially bad.

Yet correction fluid remains remarkably resilient. As early as 2005, The New York Times pondered the product’s fate with trepidation. Somehow, more than a decade on, it has kept its ground. According to the NPD Group, which tracks marketing data, sales of correction fluid grew 1 percent from 2017 to 2018, though they fell 7 percent the year before. (Correction tapes were flat, while correction pens are fading.) From 2015 to 2016 to 2017, Bic, which makes Wite-Out and Tipp-Ex, reported that correction products increased in share from 5 to 6 to 9 percent of the global stationery market. It’s a little less clear how Liquid Paper is doing. Newell, which owns the brand, doesn’t break down earnings enough to tell, and the company didn’t respond to a request for comment.

Who’s still buying these things? All the best answers are mostly conjecture. AdWeek suggested that sales might be buoyed by artists using fluid as paint. A Bic spokesperson pointed to a series of weird and entertaining interactive YouTube ads for Tipp-Ex in Europe, and said that Wite-Out is launching “colored dispensers that will appeal to younger consumers.”

That sounds faintly ridiculous—what use is a colorful bauble to a digital native?—but there may be something to it. Even as paper sales dip, upmarket stationery is one subsegment that is expected to grow, thanks to a Millennial affection for personalized stationery. Tia Frapolli, the president of NPD’s office-supplies practice, pointed to bullet-journaling and hand-lettering as paper-based trends that could breathe some life into correction fluids.

Wite-Out is a strange place for serial-killing Millennials to offer clemency. In part, the attraction to the material is the same as any other handmade or small-batch product: The physical act of covering up a mistake is imperfect but more satisfying than simply hitting backspace. There’s also a poignancy to a screwed generation gravitating toward Wite-Out.

You can’t erase the past anymore than you can erase a printed typo or a written error—but you can paper it over and pretend it didn’t happen.

David A. Graham is a staff writer at The Atlantic, where he covers U.S. politics and global news.