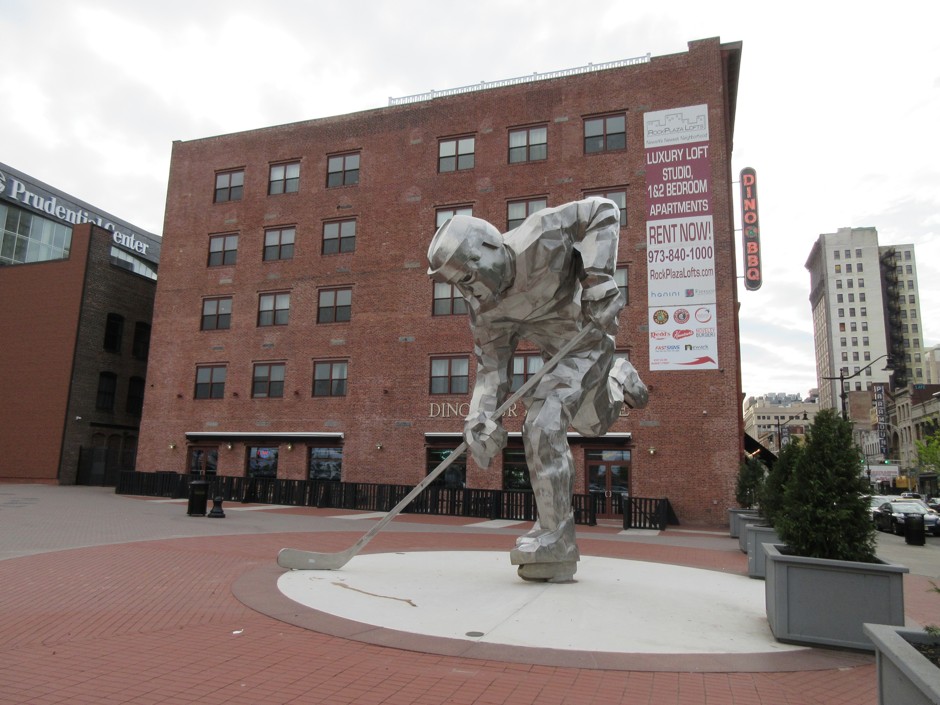 "The Iron Man" sculpture of a hockey player next to the Prudential Center in Newark, where the New Jersey Devils hockey team plays. In the background, signs can be seen for Dinosaur Bar-B-Cue BBQ and Rock Plaza Lofts luxury apartments. Photo by Beth J. Harpaz/AP .

Ron Daniels, president of the Baltimore-based civil-rights network Institute of the Black World 21st Century, assembled a group of some of the foremost African-American social-justice advocates, thinkers, and influencers to Newark in early 2019 for an emergency summit on gentrification. The emergency is that too many white people have been moving back from wherever they fled to into inner-city neighborhoods that have been culturally and racially defined as black communities for the past few decades. This white invasion is an “insidious onslaught” to African-American life as we know it, as Daniels spelled out in a blog he penned last November, and so walls must be built, or rather, policies must be built to stop the occupation.

“Development” in Washington, D.C., the original “Chocolate City,” has displaced thousands of Black people, forcing them to move to surrounding suburban areas; the prosperous central city neighborhood and Black business district in Seattle, Washington has vanished as Blacks have been forced to flee to Tacoma and other outlying cities where housing is more affordable; in Los Angeles, the Crenshaw Subway Coalition is vigorously resisting a subway extension that would spur gentrification in one of the most storied communities in Black America; in neighborhood after neighborhood in New York City, from Brooklyn, Queens, the Bronx to Harlem, gentrification is rapidly displacing hundreds of thousands of Black people.

Daniels is not the first to speak of gentrification in emergency terms, though some researchers lately have been quick to cite such talk as overblown. There is no shortage of studies over the years pointing to a tenuous connection between gentrification and the displacement of black or Latino residents.

“The supposed ills of gentrification—which might be more neutrally defined as poorer urban neighbourhoods becoming wealthier—lack rigorous support,” reads a June 2018 article in The Economist. “The most careful empirical analyses conducted by urban economists have failed to detect a rise in displacement within gentrifying neighbourhoods.”

That doesn’t mean that Daniels and the dozens of big policy thinkers gathered in Newark are wrong, though. In fact, there is plenty of data to support Daniels’ claim that it is a crisis, to a certain extent. Close to 111,000 African Americans were displaced from gentrifying neighborhoods in cities across the U.S. between 2000 and 2013, according to a recent report from the National Community Reinvestment Coalition, and most of that displacement has occurred in the cities that Daniels named above.

New York City had by far the largest number of census tracts that saw huge jumps in education levels, median household incomes, and median house values in the 2000–2013 time span, which was how NCRC researchers defined gentrification for the report. Los Angeles was second behind it, followed by Washington, D.C., which had the highest percentage of gentrifying tracts—40 percent—of all major cities. Seattle is among the top 10 cities identified for high “gentrification intensity” (measured as percentage of all tracts gentrified), with 20 percent of its neighborhoods having undergone radical economic change.

And while a gentrifying neighborhood doesn’t always mean the uprooting of non-white people, there has been plenty of that going on, again, notably in the cities that Daniels listed. In D.C., more than 20,000 people moved out of gentrifying neighborhoods between 2000 and 2013— “enough to fill the new soccer stadium built where some of them lived,” reads the report. For New York City, the number is close to 15,000. 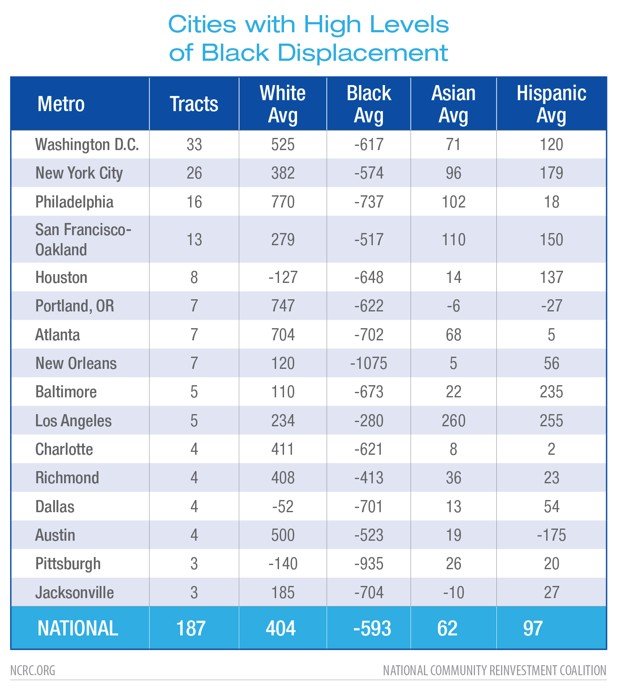 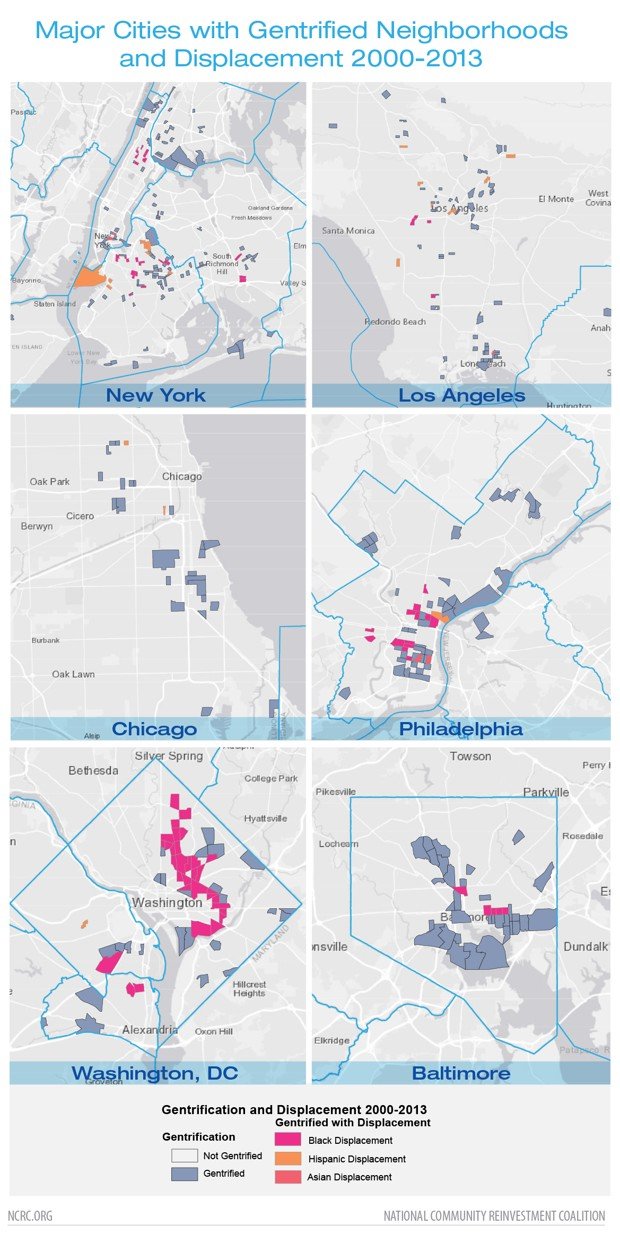 These all sound like damning—indeed, crisis-level—statistics, but they should be put into context. While the researchers identified 1,049 census tracts in total that gentrified in the period cited, that is out of 11,196 that were deemed eligible for gentrification in 2000 (meaning they indicated low levels of education, income, and home value). Of those 1,049 gentrified tracts, 232 of them, or 22 percent, showed displacement of black or Latino residents.

In 2000, the average Newark renter paid no more than 30 percent of their income on rent, but “it is now normal to live in a neighborhood where most everyone is struggling to pay rent.”

One of the main limitations of the NCRC report is that it stops in 2013, the last year for the most accurate U.S. Census data on these metrics. And, of course, a lot has happened in the last five years, meaning neighborhoods that didn’t experience gentrification and displacement in 2014 could certainly be under those spells now. However, the fact that there were so many census tracts ripe for displacement due to dismal income and housing-value levels during the study period is climacteric on its own.

“I think the emergency is that there is widespread disinvestment in low-to-moderate income communities to start with,” said Jason Richardson, NCRC’s research and evaluation director and a lead author of the report. “It’s all related to the same core issues, which are disinvestment in communities that periodically are seeing shifts into these periods of hyper-investment, and that’s what becomes gentrification.”

Meaning: gentrification is more a symptom of neighborhoods being sheltered, isolated, or redlined from economic growth. In fact, a report that NCRC issued last year found that 75 percent of neighborhoods that had been marked “hazardous” in the Home Owners Loan Corporation redlining maps of the 1930s are still some of the most economically struggling communities today. These neighborhoods aren’t dealing with gentrification or displacement, but that’s only because no one is spending any bucks in them to begin with. But that’s not to say that gentrification is not a serious problem.

“In the communities where it’s happening, it’s absolutely an emergency,” said Bruce Mitchell, NCRC’s senior research analyst and co-author of the report. “It qualifies as an emergency in the sense that we have an housing affordability issue, or you have large numbers of renters who might be pushed out of the neighborhoods that become unaffordable, pushed further out from the city, distant from public transportation, distant from their jobs. And that makes life more difficult for them. Gentrification may also look different in some cities than in others—it may look different in Baltimore, for instance, than in a place like San Francisco or Seattle where you have really extreme affordability issues.”

So while gentrification and displacement may only be happening in a few areas, they are creating exigent challenges in the lives of those affected. Several presidential candidates, including U.S. Senators Kamala Harris, Bernie Sanders, Elizabeth Warren, and Cory Booker, have introduced legislation to provide housing and rental assistance for those vulnerable to displacement—though some experts are skeptical they’d actually dint gentrification overall. Booker, who was mayor of Newark during the NCRC report study period, is credited with bringing much-needed economic development to the city’s downtown corridors. In December, his successor Mayor Ras Baraka launched a commission on gentrification and equitable growth, in part because of the corporate largesse Booker brought to Newark.

“Newark must not become another Brooklyn,” said Mayor Baraka at the commission’s announcement. “We are committed to achieving equitable growth so that the benefits of new development and investment are shared by all Newarkers and residents of limited economic means are not displaced by gentrification.”

Baraka is a keynote speaker at Ron Daniels’ gentrification summit, which his city is hosting. Interactive maps in the NCRC report show that several neighborhoods in Newark’s center core gentrified between 2000 and 2010, and two tracts saw black displacement. One of them showed a drop in black residents from 2,244 in 2000 to 988 in 2010, but it’s the tract where Newark’s Brick Towers public-housing development stood before it was torn down in 2008. The NCRC does not identify Newark as a city of “gentrification intensity” or widescale displacement of black residents like neighboring New York, at least not before 2013. 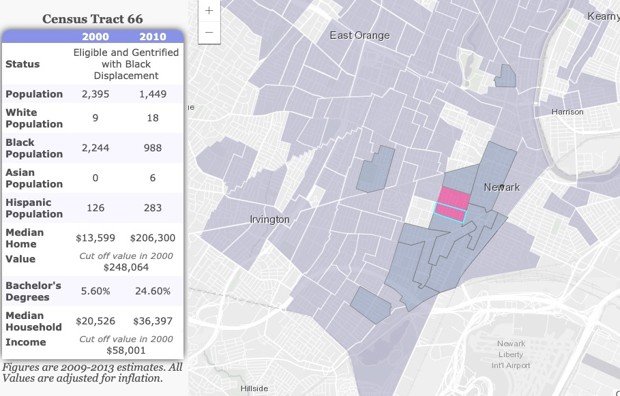 But Newark’s affordable housing problems are escalating, according to a 2017 study from Rutgers University’s Center on Law, Inequality, & Metropolitan Equity, particularly given that close to 80 percent of its residents are renters. In 2000, the average Newark renter paid no more than 30 percent of their income on rent. However, as of 2015, “it is now normal to live in a neighborhood where most everyone is struggling to pay rent,” the study authors noted.

Which means gentrification is not an emergency there, yet. But the threat is, as Daniels wrote, “insidious.” Baraka’s commission and the scholars and activists gathered in Newark this weekend are not waiting for it to become an emergency to react. They can’t afford for their cities to become the next Brooklyn.