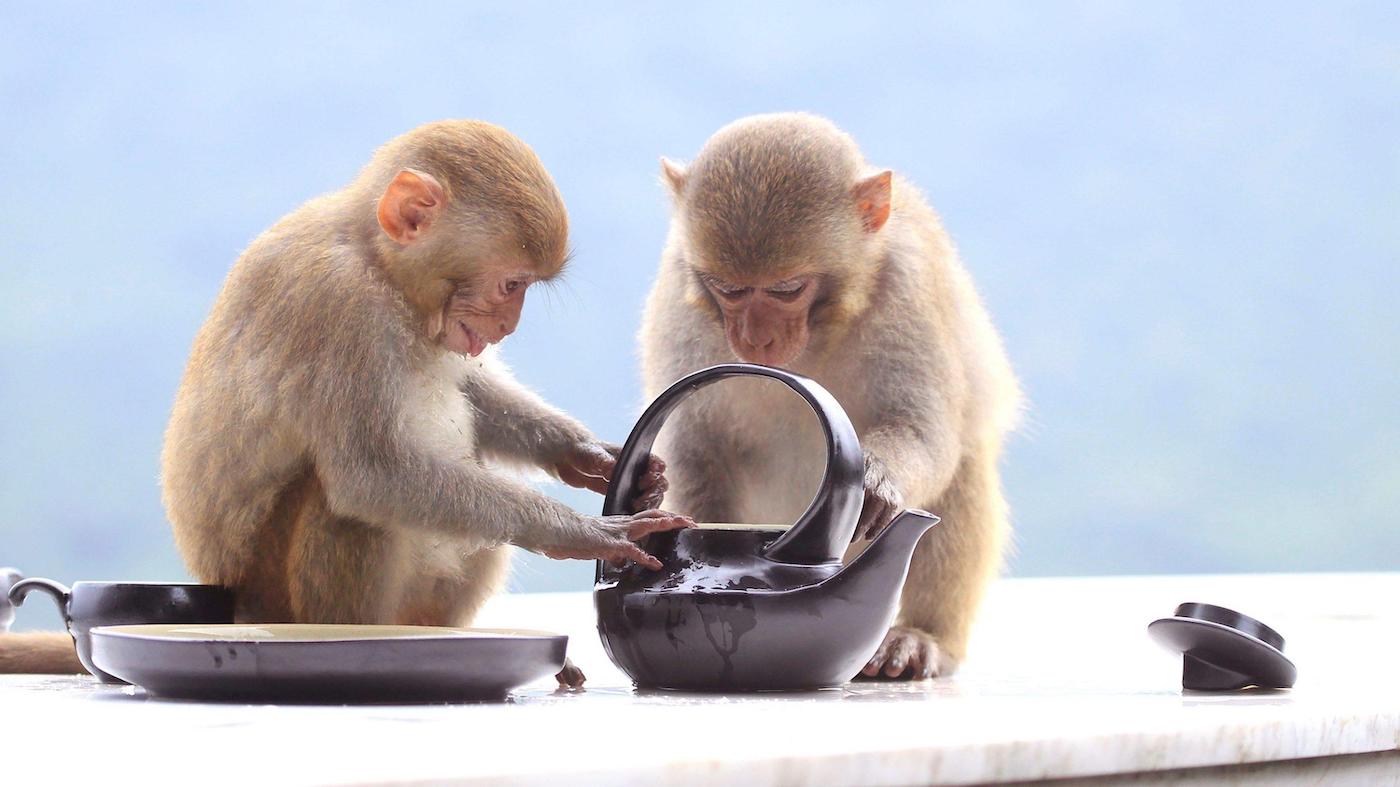 Even the monkeys get it. AP Photo/Hau Dinh.

Have you heard about how good tea is? If you are a human being, your answer is probably yes. People in cultures around the world have been well-attuned to the joys of a hot cuppa for millennia. They have also heard of how nice it is to “sleep” and “breathe” and “eat food.”

But there are still those who eschew tea in favor of coffee, wine, soda, or boring old water. Until this year, I was one of those people. And I was missing out.

The idea that something might be missing from my life first struck me while reading Conversations with Friends, by the Irish writer Sally Rooney. In Rooney’s novels, people prepare tea when they are sick, when they are nervous, and when they are bored. They brew pots before watching Netflix, in the midst of writing flirtatious emails, and while pondering illicit affairs. Eventually the reader must conclude in the Rooney universe, all characters are in the midst of either making or drinking tea at all times, unless otherwise specified.

I brought this observation up with a British friend who also likes Rooney’s books, thinking I’d identified an interesting quirk. “I think that’s just reality,” she said. In Ireland, as well as in much of the UK, she noted, people simply make tea whenever there’s a lull.

Indeed, when work brought me to London for a few months this fall, the thing I was most struck by was the kindness of the tea-making act. In the office, whenever anyone was getting up to make themselves tea, they would ask the people sitting nearby if they wanted a cup, too. A few minutes later, they’d return, bearing a little clattering bouquet of ceramic mugs with milk and sugar, adjusted to your liking. Everyone did this; everyone took turns. It was just a small thing. But it helped brighten up your day. If you’d been staring at a computer screen for hours trying to work out a particular problem and you were frustrated and a bit fried, to have someone ask if you would like some tea was a little reminder that you weren’t alone.

Research suggests that there are real social benefits to offering one another hot beverages. A 2008 study by Yale psychologists, published in the journal Science, found that participants who had recently held a cup of hot coffee were more likely to think of others as generous and caring, compared to participants who had held a cup of iced coffee. The researchers suggest that our association between physical and emotional warmth may go back to early childhood: Staying close to caregivers is essential to a young child’s comfort and safety, and so we grow up to associate the warmth of body heat with warm feelings toward others.

That’s not to mention the psychological comfort we derive from rituals of any kind, tea-making included. As behavioral scientists Francesca Gino and Michael I. Norton explain in Scientific American, rituals make us feel more calm in the face of uncertainty. In addition, they write, their own research suggests that ”engaging in rituals mitigates grief caused by both life-changing losses (such as the death of a loved one) and more mundane ones.”

Speaking personally, I can see how the simple tradition of making tea for oneself and others could be enough to keep entire civilizations going for centuries. It’s hard to stay mad at your friends and neighbors if they’re serving you afternoon tea; it’s easier to get over minor quibbles with your colleagues if they’re also the people who are offering you a beverage five minutes later. Kristen Surak, a professor of Japanese politics and author of Making Tea, Making Japan, tells NPR’s Layla Eplett that at the heart of the Japanese tea ceremony is the idea that “if everybody sat around and had a bowl of tea, we could create world peace.”

It doesn’t always work that way in practice, of course. As Surak explains, politics and power cravings are not easy to overcome, whether among 15th-century Japanese aristocrats or in the 17th-century court of Queen Catherine of Braganza. And not only has a passion for tea “started wars and ruined lives,” as Nina Caplan writes for New Statesman, a 2014 report (pdf) from the Ethical Consumer Research Association highlights the fact that tea farmers and workers are notoriously vulnerable to labor abuse.

And so making tea is not necessarily a pure pastime. When ethically sourced, however, it’s hard to imagine a better drinkable companion.

Social worker Melody Wilding has written that whenever we’re feeling overwhelmed or frustrated, we should always stop to ask ourselves if we’re hungry, angry, lonely, or tired. Any of those feelings are likely to fuel poor judgment, which means that it’s time to stop what we’re doing, take a break, and either eat a sandwich or do some journaling or call a friend or take a nap.

These are all excellent ideas. Based on my experience in England, I would add that whenever we’re feeling anything at all, we should probably make some tea and offer it to whoever is in the vicinity. A good cup, as George Orwell suggests, can make you feel wiser, braver, and more optimistic. And at the very least, if making tea is your default thing, then whatever is happening, no matter how scary, you will always, like the characters in Rooney’s novels, have something to do.