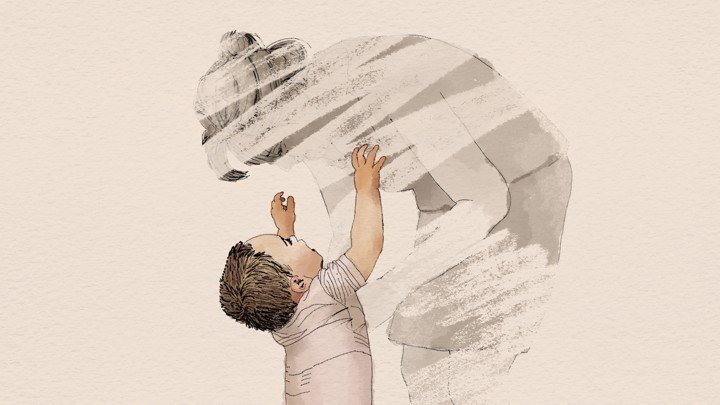 Illustration by Katie Martin / The Atlantic.

The little girl in the photograph squints and smiles broadly in the sunlight. According to a now-deleted public post on Second Chance Adoptions’ Facebook page, the girl, who the agency calls “Reese” to protect her privacy, is 10 years old, and she has been a member of her family since she was born—first in foster care, then legally adopted just before her first birthday. She loves to laugh, her adopted mom says, and she smiles all the time. She loves pink. She has no special needs. But she needs a new home.

In other posts with more pictures, the reader learns that Reese is the youngest of four daughters; the other three are the biological children of her parents. She gets straight A’s. She loves her parents and her sisters. She grumbles only when her siblings ask her to clean her room. She rarely lies and loves to wear skirts and dresses and listen to music. But according to the information provided by her parents, “This family has drastically changed their lifestyle and have left their faith and extended family for a quiet, secluded life.” It is their hope that “a different family will step forward who can provide her with the socialization and continued relationship with God that she desires.” After spending her whole life thus far with her family, Reese was being advertised on Facebook and the internet at large as available for re-adoption.

Second Chance Adoptions is a division of Wasatch International Adoption Agency (WIAA), a licensed child-placing agency that operates out of Utah. It offers domestic, international, and “second chance” adoptions to potential adoptive families across the United States, and has been licensed to do so since 1997. The agency doesn’t provide any photographs of children awaiting first domestic adoptions on its website, and a passcode is required to see children who are available for international adoptions. But anyone can click on the agency’s website to view the photographs and personal information of children available for second-chance adoptions—children who were already adopted and whose adoptive family no longer wishes to parent them. WIAA does not post the children’s real names, but their information and photographs are completely public.

As of this writing, in late 2018, 15 children were available for second-chance adoptions on the agency’s website. The majority of them were children of color, in keeping with the demographics of adoptions generally. Accurate statistics are not available for how commonplace second adoptions are, due to a wide variety of factors that include the closed nature of some adoptions, changed names on Social Security cards and birth certificates, and other paperwork issues. But the U.S. Department of Health and Human Services estimates that of the approximately 135,000 adoptions finalized every year in the U.S., between 1 and 5 percent of them end up being legally dissolved.

Legally speaking, adopted children are recognized as no different from biological children. And for this reason, parents who opt to put a child up for re-adoption are doing nothing more legally complicated than any parent who puts a child up for adoption. But children who end up in need of adoption a second time will have their lives deeply disrupted, and the experience could leave them with lifelong doubts about their worth. What is society to do with children whose adoptive parents no longer want them? Another adoption, coupled with hopes for a better outcome, is often the unfortunate best option.

Unsurprisingly, experts say that an adoption dissolution carries a significant risk of trauma to the child. According to Mayra Mendez, a licensed psychotherapist in Santa Monica, California, children can suffer from many potential side effects as a result of disrupting attachment and bonding. “A child that experiences several different placements and family living situations is at high risk for forming insecure attachment,” Mendez says, meaning he or she will have difficulty trusting adult caregivers. When adoptions are disrupted, Mendez says, children are more likely to struggle with depression and mood instability. She recommends that families seek therapy and work closely with children’s services when putting a child up for re-adoption, but cautions, “There is no easy or painless way of dealing with adoption disruption.”

Jennifer Fairfax is an adoption and collaborative-reproduction attorney licensed to practice in Maryland, Virginia, and the District of Columbia. She has helped clients adopt children who have been placed for re-adoption as well as find new homes for children whose adoptive parents have changed their mind.

According to Fairfax, “In some rare and unfortunate instances, [the adoption] doesn’t work out. It could be an older child; perhaps they have reactive attachment disorder (RAD) or some other challenge that the adopted family is unable to handle.” (Reactive attachment disorder is a condition that occurs in children who have been neglected and are therefore unable to form an attachment to their caregivers. According to the DSM-5, RAD occurs when “the child has experienced a pattern of extremes of insufficient care as evidenced by at least one of the following: social neglect or deprivation … repeated changes of primary caregiver … rearing in unusual settings.”) In Fairfax’s experience, adoptions that come out of a foster-care placement are less likely to result in disruption. Fairfax has in some cases worked with Second Chance Adoptions.

As for the photographs and personal details of these children, according to Marty Shannon, the adoption-program administrator for the Division of Child and Family Services in Utah, where Second Chance Adoptions operates, providing photos falls under best practices. “What we are trying to do is show the human side of them,” she says. Kathy Kaiser, the executive director of WIAA, adds, “It’s the only way to get the word out to people that they are available.” But Richard Klarberg, the president and CEO of the Council on Accreditation, hopes that the practice will end. “The concept of advertising a child brings out the worst characters who are likely to be looking at the child from a wholly unethical and criminal perspective,” Klarberg says. “It’s a nightmare.”

According to Kaiser, the agency began the Second Chance Adoptions program out of concern for children whose adoptive parents were attempting “rehoming” on their own, posting online and potentially putting their children in grave danger. “We felt very strongly that these families were worth helping,” she says. “We opened this program because we could see that there were people that were adopting children overseas and through the foster-care system, and they were unsuccessful in parenting the child.”

WIAA’s website advises parents who are seeking a new home for an adopted child that they “will not face any court or social-services recriminations, because this is a legal and appropriate way to help a child be adopted a second time.” WIAA goes on to explain that if the agency and placing family agree to enroll the child in the program, “the only fee you pay for our services is $1,500.” After that, the placing family will also need to hire an attorney in their state of residence in order to complete the process. “We are very regulated by the state of Utah,” Kaiser says. “Everything is on the up-and-up.”

In 2015, Carrie Barker and her husband came across a Facebook post about a boy Second Chance Adoptions called “Jonathan.” They contacted the agency with a brief email, stating only that they were interested, lived on a farm, and could get an updated home study, as they had already obtained one from the county for potential foster-care placements. In return, Barker received detailed, personal information, including three YouTube videos of Jonathan, which made her uncomfortable. Kaiser maintains that this information is shared only with prospective families once a home study has been provided to Second Chance Adoptions, and that the personal information is offered on behalf of the “placing family,” a term used to describe the family putting their child up for adoption. “We never post that information publicly,” Kaiser says.

According to the information provided to the Barkers, Jonathan’s “current family does not have medical insurance that covers mental health, so he has not had a psychological evaluation.” Barker and her husband decided they were not comfortable with this process and never pursued it further.

Many adoption advocates are critical of Second Chance Adoptions and similar agencies, including Maureen Flatley, a longtime child-welfare advocate based in Massachusetts who works with multiple agencies and advocacy groups as well as members of Congress. There is no federally mandated home-study standard, but the Structured Analysis Family Evaluation, the home-study methodology designed by the Consortium for Children, has been mandated by 16 states and voluntarily adopted by agencies in 25 additional states, according to Flatley. States’ home-study requirements vary widely.

Flatley has advised Representative Jim Langevin in his legislative efforts to improve adoption oversight. A Democrat from Rhode Island, Langevin has an interest in adoption and foster-care oversight that stems from childhood. “My parents fostered children when I was school-aged, and that experience led me to be more sensitive to and informed about foster care and adoption issues and the challenges these kids face.” Along with Republican Representative Tom Marino of Pennsylvania, Langevin introduced the Safe Home Act this year to amend the Child Abuse Prevention and Treatment Act by classifying unregulated child transfers as child abuse. It is currently in committee. Langevin and his colleagues are not seeking to completely eliminate secondary adoptions but rather to prevent unregulated ones.

Langevin hopes that his legislation will inspire a uniform process for all secondary adoptions in the country. “While they may still be the consequence of an unsuccessful adoption, secondary adoptions need to go through regulations and safeguards, including background checks, criminal and medical histories, home studies, references, and also post-placement visits by oversights,” he says. (Second Chance Adoptions does not practice unregulated child transfers, and therefore would not be affected by this legislation.)

While there will always remain the possibility that an adoption could fail, Flatley and other child-welfare advocates hope that better screening of adoptive parents could lead to fewer secondary adoptions. “When I started 25 years ago, I thought, This will be great! Warm and fuzzy. But what I discovered is that adoption is unbelievably unregulated,” Flatley says.“We have cultivated an unbelievably cavalier culture of disposability in adoption.”

The profile of the little girl referred to as Reese has been moved to the placed-children section of Wasatch’s photo gallery, now one of the 110 children adopted through the agency for the second time in their lives, and hopefully for good. But, according to Kaiser, second-chance adoptions through her agency also sometimes fail: These matches have about a 6 percent failure rate, meaning some of these children will likely lose another set of parents—the third in their short lives.

Jenn Morson is a writer based in Maryland.