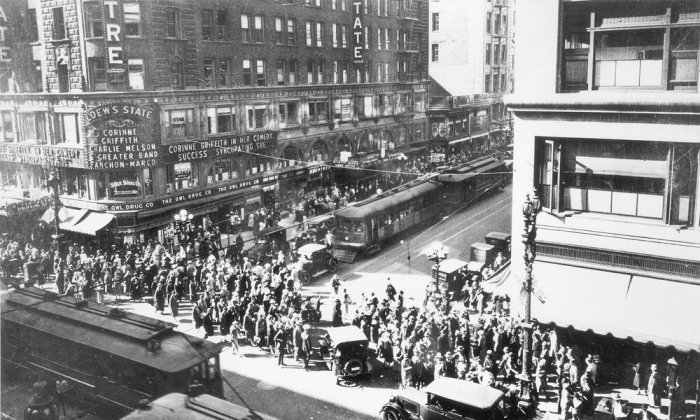 Today it is a commonplace that the automobile represents freedom. But to many Americans in the 1920s, the car and its driver were tyrants that deprived others of their freedom. Before other auto promoters, Charles Hayes saw that industry leaders had to reshape the traffic safety debate. As president of the Chicago Motor Club, Hayes warned his friends that bad publicity over traffic casualties could soon lead to “legislation that will hedge the operation of automobiles with almost unbearable restrictions.” The solution was to persuade city people that “the streets are made for vehicles to run upon.” 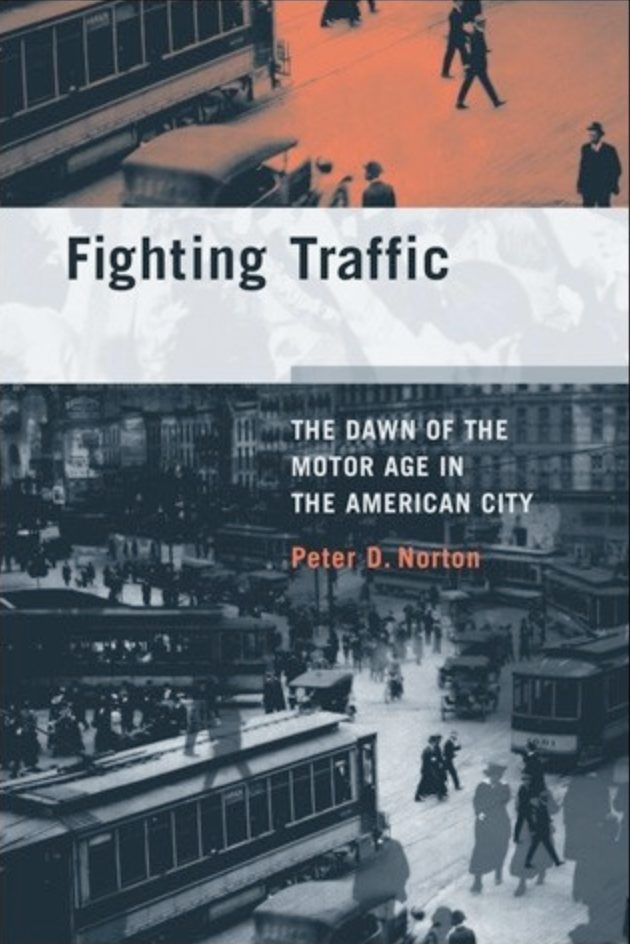 This article is adapted from Peter Norton’s book “Fighting Traffic: The Dawn of the Motor Age in the American City.”

Pedestrians would have to assume more responsibility for their own safety. But how? Where they had been tried, legal regulations alone had been ineffective. From 1915, cities tried marking crosswalks with painted lines, but most pedestrians ignored them. A Kansas City safety expert reported that when police tried to keep them out of the roadway, “pedestrians, many of them women” would “demand that police stand aside.” In one case, he reported, “women used their parasols on the policemen.” Police relaxed enforcement.

City people saw the car not just as a menace to life and limb, but also as an aggressor upon their time-honored rights to city streets. “The pedestrian,” explained a Brooklyn man, “as an American citizen, naturally resents any intrusion upon his prior constitutional rights.”  Custom and the Anglo-American legal tradition confirmed pedestrians’ inalienable right to the street. In Chicago in 1926, as in most cities, “nothing” in the law “prohibits a pedestrian from using any part of the roadway of any street or highway, at any time or at any place as he may desire.” So noted the author of a traffic survey commissioned by the Chicago Association of Commerce.  According to Connecticut’s first Motor Vehicle Commissioner, Robbins Stoeckel, the most restrictive interpretation of pedestrians’ rights was that “All travelers have equal rights on the highway.”

Conversely, the motorist’s claim to rights in the street at the expense of pedestrians was very hard to make. By law and by custom, all had a right to the street, and none could use it to the detriment of others’ rights. In 1913 the New York Court of Appeals observed that it was “common knowledge” that the “great size and weight” of automobiles could make them “a most serious danger,” and so the responsibility for preserving the safety of the streets lay overwhelmingly with motorists. In New York City’s traffic court in 1923, a judge explained that “Nobody has any inherent right to run an automobile at all.” Rather, “the courts have held that the right to operate a motor vehicle is a privilege given by the state, not a right, and that privilege may be hedged about with whatever limitations the state feels to be necessary, or it may be withdrawn entirely.”  The law would not deprive pedestrians of their customary rights so that motorists could roam at will in cities.

By custom the street had always been free to all; the law had intervened only in the names of safety and equity. Equity could demand, for example, that no one obstruct the roadway with standing vehicles. Yet fast and dangerous automobiles imperiled pedestrians’ traditional right. It did not make sense to most city people to protect the pedestrian majority by curtailing this right and turning the pavement over to motorists. A Philadelphia newspaper editor reproached motorists for usurping “pedestrians’ rights” by passing standing streetcars and preventing pedestrians from crossing streets. 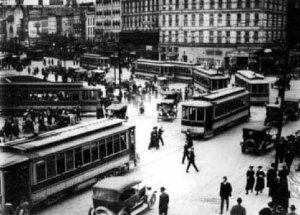 Readers’ letters to the St. Louis Star express pedestrians’ indignation at motorists’ intrusion upon their rights. One letter, signed “Pedestrian,” complained that “the pedestrian is forced to submit to the tyranny of the automobilist.”  Other letter writers urged pedestrians to organize to defend their claim to the streets. “It might be necessary to organize an antiautomobile league,” wrote one. “The time is ripe for the common people and the pedestrian to organize,” wrote another. “We must all pull together,” wrote a third, and “insist on our rights to use the streets” until the “auto-hogs . . . wake up to the fact that they cannot do as they please and monopolize the streets.”

Local police tended to blame motorists for pedestrian traffic casualties. With their traditional mission of defending custom and seeking equity, police were unwilling to abridge pedestrians’ rights to the free use of city streets. New York police magistrate Bruce Cobb in 1919 defended the “legal right to the highway” of the “foot passenger,” arguing that “if pedestrians were at their peril confined to street corners or certain designated crossings, it might tend to give selfish drivers too great a sense of proprietorship in the highway.” He assigned the responsibility for the safety of the pedestrian — even one who “darts obliquely across a crowded thorofare” — to drivers. Most American police would have agreed with the Ontario authorities who regarded pedestrians as victims of “an unfortunate attitude of mind which belongs to some drivers and which assumes that the pedestrian should get out of the way of the vehicle.” 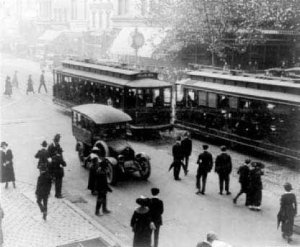 Police and judicial authorities recognized pedestrians’ traditional rights to the streets. “The streets of Chicago belong to the city,” one judge explained, “not to the automobilists.”  Some even defended children’s right to the roadway. Instead of urging parents to keep their children out of the streets, a Philadelphia judge attacked motorists for usurping children’s rights to them. He lectured drivers in his courtroom. “It won’t be long before children won’t have any rights at all in the streets,” he complained. As the usurper, the motorist, not the child, should be restricted: “Something drastic must be done to end this menace to pedestrians and to children in particular.”

As might be expected, judges tended to defend customs of street access. A Philadelphia newspaper declared that as a general rule, “indignant judges tell the average driver who is called before them that ‘they and their contraptions should be driven from the streets.’”  In 1921 an Illinois judge struck down Joliet’s requirement that pedestrians cross streets at right angles or on crosswalks, and that pedestrians follow other traffic rules. In 1926 a Detroit judge admitted that in accident cases “his sympathies were always with the pedestrian, and that a driver of a motor vehicle which had caused injury to a pedestrian, coming before him in his court could expect as severe treatment as the law would permit him to hand out.”  Another magistrate lectured an errant motorist for threatening to make America a “race of cripples.” Upon convicting a truck driver of manslaughter he declared: “Such persons as you are a disgrace to humanity.”  Even the ordinary traffic police won a reputation for hostility to the motorist. The director of police in Philadelphia was forced to remind his officers publicly that well-intentioned drivers who overlooked one of the city’s many motoring rules “should not be treated as speed maniacs or criminals.”

Juries tended to favor pedestrians as well. “Juries in accident cases involving a motorist and a pedestrian almost invariably give the pedestrian the benefit of the doubt,” a safety expert explained in 1923; “the policy of the average juryman is to make the automobile owner pay, irrespective of responsibility for the particular accident.”

More often than not, the press took much the same view. The leading city paper in Syracuse, New York, argued that the burden of safety lay properly with motorists. “The public, for the most part, is not so greatly in need of constant warnings against the dangers of the streets.”  The New York Times claimed in 1920 that pedestrians’ rights to the streets were so extensive that “as a matter of both law and morals they are under no obligation” to exercise “all possible care.” The greater share of responsibility (moral and legal) lay with the motorist: “drivers justly are held to a greater care than pedestrians,” the paper contended. Pedestrians “have rights in the streets, even tho they choose to cross elsewhere than at the appointed places.”  The Outlook agreed that a higher order of justice was at work than the merely legal. Motorists have a “moral responsibility” on the road, a responsibility too few were fulfilling.

Before the American city could become a largely automotive city, the automobile had to win a superior right to most of the street’s surface. Unless it succeeded in this claim, in crowded towns those motorists who were unwilling to run down pedestrians would be forced to a virtual standstill. Yet before 1920 American pedestrians crossed streets wherever they wished, walked in them, and let their children play in them. The extent of these practices was such that in one of the first organized street safety campaigns in 1914, the Chamber of Commerce, in Rome, New York, had to ask pedestrians not to “visit in the street” and not to “manicure your nails on the street car tracks” — with limited success. Under these circumstances, an automotive city seemed a dim prospect.

The transformation was not a natural evolution, a side effect of technological progress, the choice of a democratic majority, or the product of a free market. Despite centuries-old cultural and legal legacies that led to answers unfavorable to automobiles in cities, automotive interest groups developed a positive case for new ways to fight traffic accidents and congestion, coinciding with their new self-identification as “motordom.” It was a strategic effort waged on three fronts: laws, social norms, and engineering standards. Often the proponents of the motor age presented their position clothed in a rhetoric of freedom. From American ideals of political and economic freedom, motordom fashioned the rhetorical lever it needed. In these terms, motorists, though a minority, had rights that protected their choice of mode from intrusive restrictions. Their driving also constituted a demand for street space, which, like other demands in a free market, was not a matter for expert scrutiny.

The struggle was difficult and sometimes fierce. In motordom’s way were street railways, city people afraid for the safety of their children in the streets, and most of the established traffic engineering principles of the 1920s. Motordom, however, had effective rhetorical weapons, growing national organization, a favorable political climate, substantial wealth, and the sympathy of a growing minority of city motorists. By 1930, with these assets, motordom had redefined the city street.

In the new model, some users of once unquestioned legitimacy (notably pedestrians) were restricted. Traffic engineers no longer burdened motorists with the responsibility for congestion; their goal now was to ease the flow of motor vehicles, either by restricting other users or by rebuilding city thoroughfares for cars. New urban roads were treated as consumer commodities bought and paid for by their users and to be supplied as demanded. On this basis, over the following four decades, the city was transformed to accommodate automobiles.

Peter Norton is associate professor of history in the Department of Engineering and Society at the University of Virginia. He is the author of “Autonorama: The Illusory Promise of High-Tech Driving” (Island Press) and “Fighting Traffic: The Dawn of the Motor Age in the American City,” from which this article is adapted.