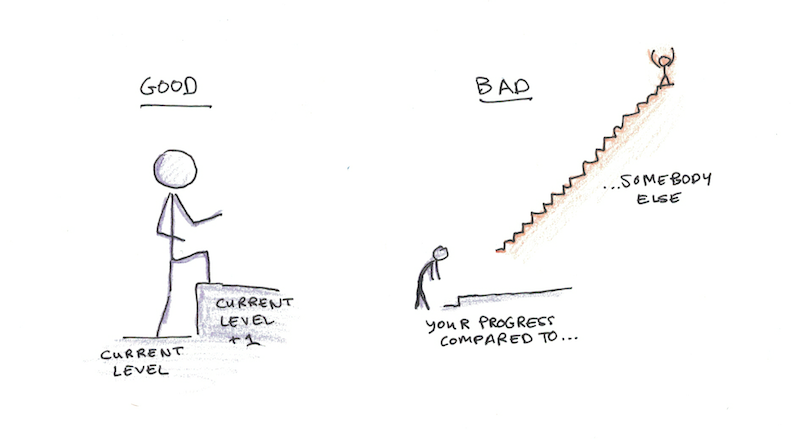 You should really exercise four times per week. Not just jogging though, high-intensity interval training. And do intermittent fasting. And drink two gallons of water a day. Don’t forget to meditate.

If you’re not waking up at 4am, you’re missing the most productive hours of the day. Did you watch some television? You could have been using that time for reading books. Not just popular books and novels though. You should be reading classics from Seneca, Aurelius and Laozi.

Productivity guilt is this. It’s the constant nagging feeling that you should be doing more. And if you’re not doing everything, then you’re a lazy slacker who will never reach your goals.

Blogs like this one are probably a big contributor to productivity guilt. I’m sorry.

Unfortunately, this is a side-effect of offering advice and suggestions. For some people, the suggestions will be helpful in solving their problems. For others, they will be too much and just make them feel guilty. It’s hard as a writer to have the former without the latter.

Hardcore advice is inspiring to some. Even easy suggestions can be guilt-inducing for others. There’s no way to only do one without the other.

How to Prevent the Guilt

Luckily, you have the power to prevent feeling guilty. There are three steps to help avoid the productivity guilt you may feel:

That’s okay. Everyone is. Nobody, including me, does everything perfectly all the time.

I’ve written this blog over thirteen years. There’s over 1200 articles, most of which have some kind of advice or suggestion. Combined, that’s way too much for anyone to do simultaneously, permanently.

I go through phases where my habits evolve. Old ideas I wrote about get replaced with new ones. Not always because the new is better than the old, but because I’m always changing (as will you). If you see, instead, that everything I’ve written about is a static and permanent part of who I am, when you sum it all up, you’ll get to something that’s probably unmanageable as a whole.

Of course, I trust not everyone sees it this way. This is simply what one might naively expect if they skimmed my 1200+ articles archives… 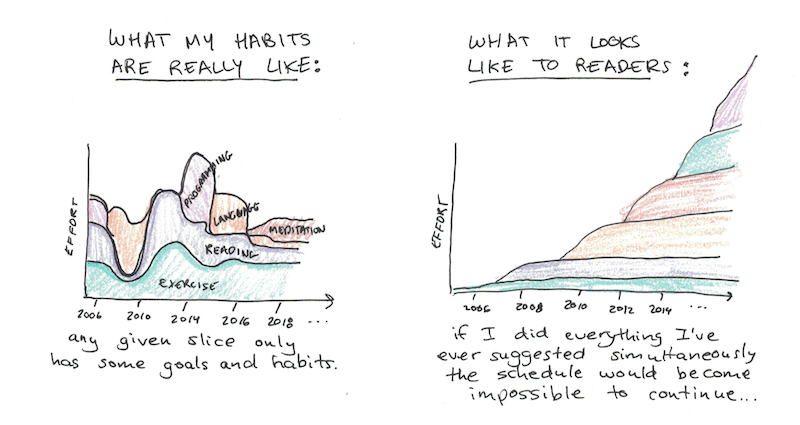 Of course, I trust not everyone sees it this way. This is simply what one might naively expect if they skimmed my 1200+ articles archives…

2. You Shouldn’t Be Your Ideal Self.

Usually advice is a direction, not a destination. This means that moving from where you are now, in the direction it points, will probably produce benefits. But taking everything to its logical extreme or conclusion often isn’t actually very good.

Sometimes this can happen by simply stacking a lot of individually good pieces of advice that, if taken too far and too many, can start to have drawbacks. Consider the list of common advice at the start of this article. Each piece, on its own, is probably good. But the sum total of them, even if you could execute them, would leave very little time and energy left in the day for mundane but important things.

Other times, the ideal picture can be bad because while a marginal shift in one direction is helpful, a total shift in that direction is not. Spending less time on social media and communication platforms is probably good. But if you had zero contact, that might start to create more social interference than the productivity it generated.

Social media is just a possible example. Many other vices are probably best in moderation–but moderation is hard. 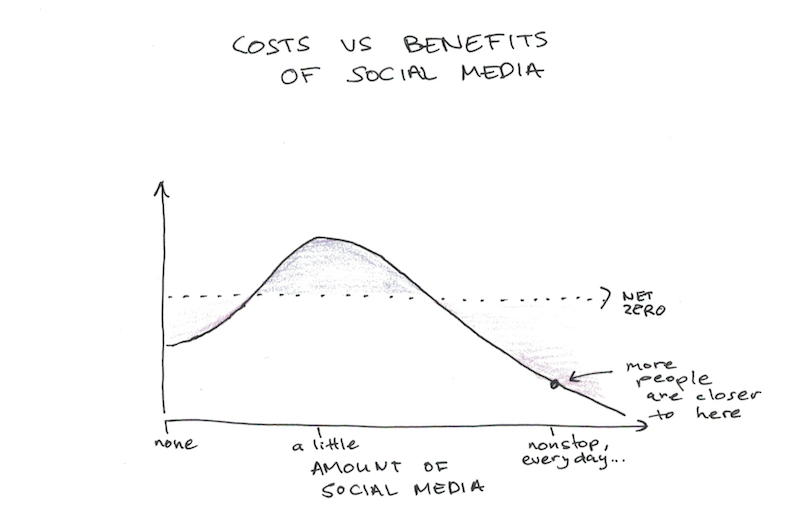 Social media is just a possible example. Many other vices are probably best in moderation–but moderation is hard.

3. Your Starting Point is Always Here.

The real source of the guilt, however, isn’t because the standards imposed are too unrealistic or even undesirable, but because there’s always a gap between how we see ourselves and how we would like to be.

The right move to make is always one that pushes you a little, but takes where you are as a starting point. That also includes your psychological strengths and weaknesses.

I had a Twitter exchange with a few people who have been wanting to learn something new, but keep putting it off. You can see the guilt they feel, that they haven’t been able to make progress.

But this is the wrong way to look at it. Yes, it would be nice if we were perfect beings with infinite discipline, time, freedom, resources and intelligence. But we’re not. We’re always starting as flawed people, trying to make things a little better for ourselves.

The question is never, “What should I do, ideally, to solve this problem?” Instead it’s always, “How could I do things a little differently than last time for a little better results?”

Trying to improve ourselves is a good thing. But too much guilt doesn’t help you do that. If you’ve been feeling a lot of guilt lately, here’s a few things you can do:

Most of all, stop telling yourself the guilt is good for you. Guilt does motivate, but it does so at high costs and with a lot of side-effects. You may not choose how you feel, but you can’t possibly adjust it if you think that non-stop guilt about not doing enough is somehow an ideal state. Aim to be slow and patient instead, and you’ll get most of the results with a lot less of the anxiety.