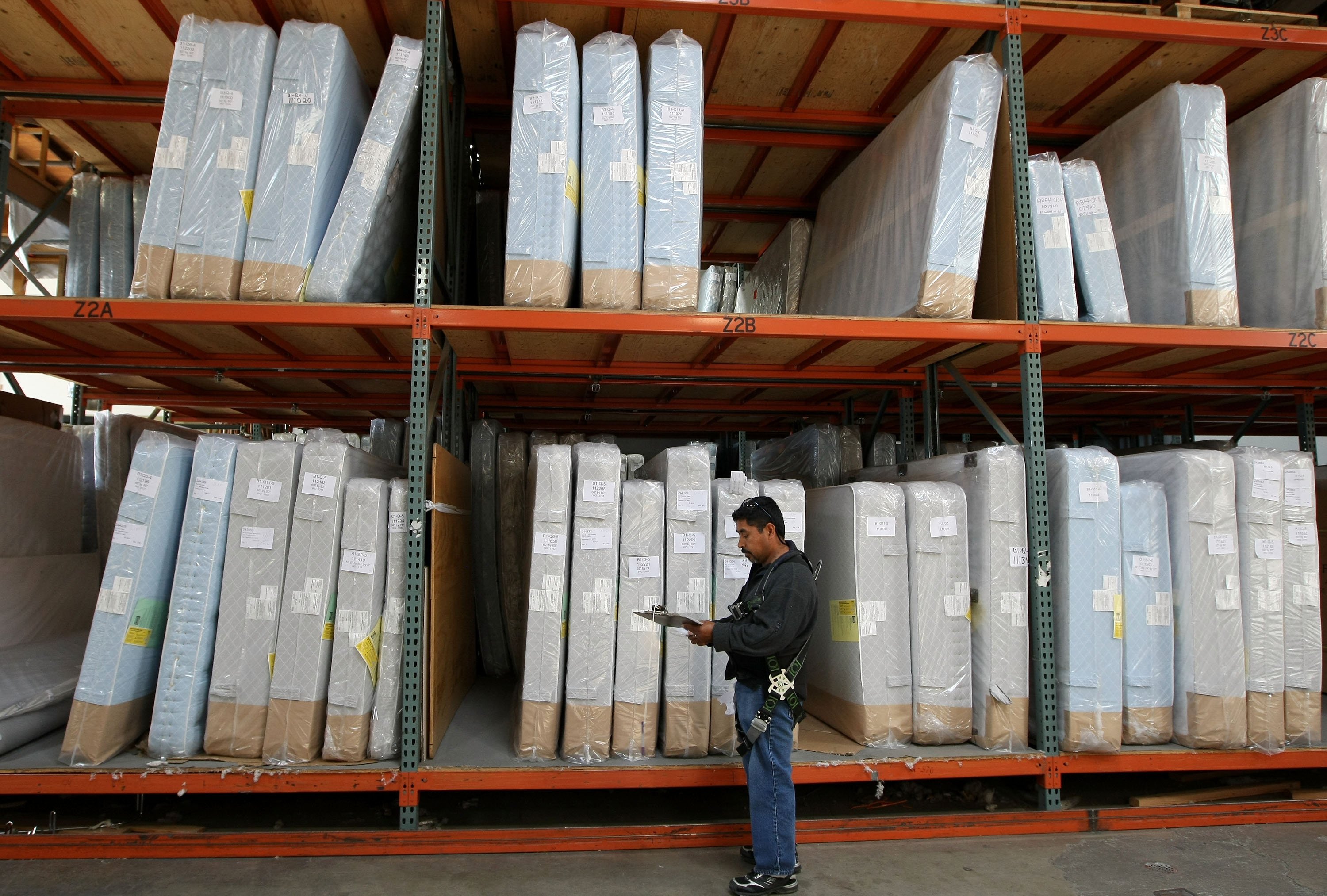 For kids and adults alike, waterbeds used to be the coolest—until suddenly they weren’t. After a heyday in the late 1980s in which nearly one out of every four mattresses sold was a waterbed mattress, the industry dried up in the 1990s, leaving behind a sense of unfilled promise and thousands upon thousands of unsold vinyl shells. In 2016, waterbeds make up only a very small fraction of overall bed and mattress sales. Many home furnishing retailers won’t sell them, and some that do say it’s been years since they last closed a deal.

So what happened? Although they were most popular in that decade of boomboxes and acid-washed jeans, waterbeds had been gaining steam since the late 1960s, and in retrospect seem to have more substance to them than other notorious fads. How did our enthusiasm for sleeping atop gallons and gallons of all-natural H2O drain away so quickly?

By some accounts, waterbeds date all the way back to 3600 BCE, when Persians filled goat-skin mattresses with water warmed by the sun. In the early 1800s, Dr. Neil Arnott, a Scottish physician, created a “hydrostatic bed” for hospital patients with bedsores. This was essentially a warm bath covered with a thin layer of rubber and then sealed up with varnish. In 1853, Dr. William Hooper of Portsmouth, England patented a therapeutic rubber mattress that could be filled with water. It, too, was for hospital patients suffering from poor circulation and bedsores. In the mid 20th century, science fiction writer Robert Heinlein—inspired by the months he spent bedridden with tuberculosis in the 1930s— described waterbeds in great detail in three of his novels. The beds he envisioned had a sturdy frame, were temperature-controlled, and contained pumps that allowed patients to control the water level inside the mattress. There were also compartments for drinks and snacks, which sounds really convenient. It was, according to Heinlein, “an attempt to design the perfect hospital bed by one who had spent too damn much time in hospital beds.”

The inventor of the modern day waterbed was an industrial design student named Charles Hall, who in 1968 submitted a waterbed prototype (made with a vinyl mattress rather than a rubber one) for his masters thesis project. Hall wanted to rethink furniture design, and was taken with the idea of fluid-filled interiors. Before settling on the waterbed, he had tried filling a chair with 300 pounds of cornstarch gel, which quickly rotted. He also tried using JELL-O as a filling, with similarly disastrous results. The introduction of water fulfilled his vision without the ick factor. During the graduating class’s thesis workshop, Hall told The Atlantic, students ignored other projects and ended up hanging out on his waterbed.

Hall established his own company, Innerspace Environments, and began manufacturing waterbeds for sale throughout California. Early customers included the band Jefferson Airplane, as well as the Smothers Brothers. Eventually Hall’s bed, which he named “The Pleasure Pit,” made its way into 32 retail locations throughout the state. Success was short-lived, however, as cheap imitators quickly flooded the market. By the early 1970s, dozens of different companies were manufacturing waterbeds, feeding the growing demand for a groovy new way to … sleep.

Although many associate waterbeds with strait-laced suburban living, back in the ‘70s they were a symbol of the free-flowing counterculture movement—more likely to be sold with incense and Doors albums than with fluffy pillows and high thread count sheets. “That fluid fixture of 1970s crash pads” was how a New York Times story from 1986 described them. The names of manufacturers and distributors reflected this: Wet Dream, Joyapeutic Aqua Beds, and Aquarius Products were a few that rolled with the times.

Sex, of course, was a big selling point. “Two things are better on a waterbed,” an Aquarius ad stated. “One of them is sleep.” Another ad proclaimed, “She’ll admire you for your car, she’ll respect you for your position, and she’ll love you for your waterbed.” Hippies and hip bachelors alike were the target market for the bed that promised the motion of the ocean. Hall even got in on the act, offering a $2800 “Pleasure Island” setup, complete with contour pillows, color television, directional lighting, and a bar. Hugh Hefner loved the craze, of course—Hall made him one covered in green velvet, and Hef had another that he outfitted in Tasmanian possum hair.

By the '80s, waterbeds had moved from the hazy fringe to the commercial mainstream. “It has followed the path of granola and Jane Fonda,” the Times noted. Indeed, waterbeds were available in a variety of styles, from four-post Colonials to Victorian beds with carved headboards to simple, sturdy box frames. Allergy sufferers liked having a dust-free mattress, while back pain sufferers were drawn to the beds’ free-floating quality. Advertisements by sellers like Big Sur Waterbeds played up the health benefits with shirtless, beefy dudes like this one.

People were also eager to try a new spin on something as boring as a bed. Kids, especially, loved the squishy, gurgling weirdness of a waterbed. If you were a child of the '80s, it arguably was as close to a status symbol as you could get. Manufacturers, meanwhile, fed the demand with novelty frames, bunk beds, circular love nest beds, and even waterbeds for dogs. They also improved the experience with innovations like “baffles” that cut down on the wave motion many beds created, thereby addressing the one-of-a-kind problem of people getting seasick in their own bedrooms. As waterbed mania swept the nation, specialty outlets like Waterbed Plaza, Waterbed Emporium, and the Waterbed Store opened up shop, and wave after wave of cheesy local television ads followed.

By 1984, waterbeds were a $2 billion business. At the height of their popularity, in 1987, 22 percent of all mattress sales in the U.S. were waterbed mattresses.

Here’s the thing about waterbeds, though: They were high maintenance. Installing one meant running a hose into your bedroom and filling the mattress up with hundreds of gallons of H2O—a precarious process that held the potential for a water-soaked bedroom. Waterbeds were also really, really heavy. In addition to the filled mattress, the frame—which had to support all that water weight—could be a back-breaker. When the mattress needed to be drained, an electric pump or some other nifty siphoning tricks were required. Waterbeds could also spring leaks (as Edward Scissorhands showed), which could be patched but, again, added to the cost and hassle.

In the '90s, it became clear that the novelty of waterbeds couldn’t overcome the additional work they required. By that time, competitors like Tempur-Pedic and Select Comfort were also coming out with mattress innovations that offered softness and flexibility without making customers run a garden hose through their second-floor bedroom window.

These days, the waterbed market is still going, albeit on a much, much smaller scale. Mattress models are lighter than the models of decades past, and come with nifty accessories like foam padding and interior fibers that further cut down on the wave effect. They’re also outfitted with tubes or “bladders” that take in water rather than the entire mattress, making the experience less like filling an enormous water balloon. Most models are quite sophisticated, in fact. The Boyd Comfort Supreme mattress has all the technical specs of a household gadget: three-layer lumbar support, four-layer reinforced corners, “thermavinyl” heat resistant bottom layer, five-layer wave reduction system. That’s a lot of layers! There are also airframe waterbeds that stand firm on their own, and sophisticated temperature-control devices that keep sleepers warm. Marty Pojar, owner of The Waterbed Doctor (which takes mainly online and phone orders), told The Orange County Register that most of his orders come from customers in the Midwest and Northeast, where customers want to hop into a warm bed on cold winter nights.

Like those who still play Sega Genesis or prefer a flip phone to an iPhone, waterbed customers are fiercely loyal to their retro trend. But their enthusiasm alone won’t likely bring waterbeds back to the mainstream. Indeed, even the name “waterbed” carries negative connotations, retailers note. Pojar prefers to call them “flotation” beds. A Washington D.C. furniture salesman interviewed by The Atlantic said he oftentimes doesn’t tell customers when they’re lying on a waterbed. "Everybody who tries the ones we have on our floor is very happy with the feel, but some people won't get it just because it's a waterbed," he said. These days, the most promising market for soft, squishy waterbeds may, oddly enough, be cows.