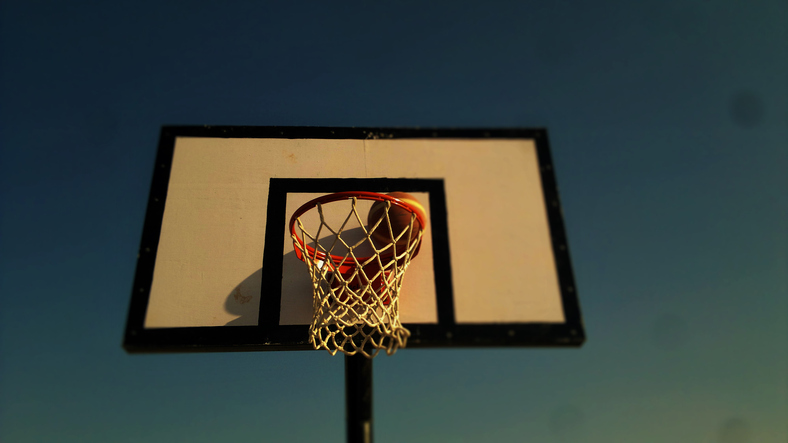 Growing up, I was unbeatable at H-O-R-S-E, the basketball game kids play when there’s just a few of them around and only one hoop on hand. Basically, everyone gets a chance to skin a basket from a certain spot or in a certain way, then each subsequent player’s got to follow suit. I’d invite friends to come play in my driveway after school. When the game got close, I’d pretend to have a new idea: “Hey — I wonder if I can make a shot from way back on the grass off one bounce? Ha! Wouldn’t that be crazy?!” I’d really sell it.

Then I’d drain the shot and win, every time. My poor victim had no idea I’d taken that shot hundreds of times. Maybe thousands. That I knew exactly which crack in the driveway to aim for, and that if I threw the ball hard enough off that crack, I couldn’t miss — our worn-down backboard would deaden every shot, and the ball would drop right in. I’d even named the shot after one of my favorite Knicks players at the time, Rolando Blackman: You weren’t beating me when I broke out the “Rolando Crackman.”

Your startup idea probably won’t work any better than my friends’ efforts to replicate the Crackman back then. That’s not news — you know that 95 percent (or whatever that number is) of startups fail. What is news is why you’ll fail. After being pitched 571 idea-stage, pre-product startup pitches in the past 24 months — most as applications for my pre-product accelerator — I’m convinced it’s not just because “startups are really hard.”

Startups are hard, obviously, but the majority of founders make them impossible. You’re doomed from day one because you’re starting with the wrong thing. You never had a shot.

It’s not your fault. The way most people think about startup ideas is fundamentally wrong. And the right way — like any startup theory worth its salt — is counterintuitive. You’ll only have a handful of opportunities to completely immerse yourself in a project, so you need to identify the ones that give you an unfair advantage.

I’m here to help you find your Rolando Crackman.

“Whisper Ideas” Are Your Enemy

ClassPass for meditation is what I call a “whisper idea,” because whenever founders pitch them to me, they lean in real close. They’re the category that includes Waze for crowded bars, Waze for parking spots, an app for daily wardrobe recommendations, an app for groups of friends to date each other, and about 50 other Uber/Waze/Airbnb-for-X variations. I’d guess that 90 percent of the ideas I hear are whisper ideas.

And I hear them in hushed tones. A founder and I are usually at a coffeeshop, they’ve usually asked me to sign an NDA, and they’re always giving everyone in the place the side-eye emoji. Founders who possess whisper ideas never know who’s listening.

This particular founder was razor sharp. McKinsey and HBS. I listened as she rehashed conversations she’d had with customers on both sides of the market—people who ran meditation studios and people who meditated. Everyone was on board.

She’d saved for a year and had recently hired a development shop to build version 1.0,  an app that would allow customers to subscribe to the monthly service and book classes at participating studios. The back end would even play nice with the studios’ existing booking software. Her plan was to start with 10 studios in the West Village of Manhattan in order to prove the concept. Next, she’d raise a seed round and expand. Validate, raise, expand, hire, grow. Rinse, repeat.

She nailed the pitch. It all sounded so ... logical. And that’s why whisper ideas are so dangerous. In your non-startup life, logical is good. Incremental growth is good. Overwhelming external validation is good. When this founder told her friends about her ClassPass for meditation idea, they validated it. “Act fast,” they said. “This is the one.”

Founders working on whisper ideas never think the risk is in the idea. The biggest risk is always speed. They tell themselves it hasn’t been built yet because no one has thought of it yet. ClassPass was obvious after the fact; this will be, too.

When your biggest differentiator is simply “no one has thought of this yet” — well, you whisper.

The Idea Hourglass Is Your Friend

I visualize every startup idea as an hourglass filled with sand.
The minute you start pursuing an idea, you flip that hourglass over. The sand is the amount of time you’ve got to build something meaningful. The amount of sand you start with varies — it’s based on a bunch of inputs like founder, domain expertise, team, market, funding potential/needs, key insight, and customer. The more unique or elite your advantage is in any of those categories, the more sand goes in the hourglass.

The goal of your startup idea is to maximize your initial portion of sand. Which is the polar opposite of a whisper idea. You aren’t picking an idea you need to execute fast, you’re picking an idea that allows you to build slow. The holy grail is when your hourglass has more sand than anyone else’s possibly could if they chose to pursue something similar. No need to whisper if you’re the only one who can do it.

“Why is slow good?” you might be wondering. “I thought I was supposed to ‘move fast and break things?'”

Slow is good because the first version of your product will be wrong. So will the second, third, and probably fourth. Even if you’re the most qualified person in the world, it’ll take a long time to build the right thing. It took ClassPass three years to find their way to a product that resonated.

The sand in your hourglass buys you the time to make mistakes. When there’s a lot of it, you don’t need to spend precious time learning the nuances of the market or customer or problem; you know more about this than anyone. So instead you get to spend your time figuring out the hard, unpredictable stuff. You get to build slowly—to focus on a small group of people, build something small and specific they love, then expand. Because you know how to segment customers and what small product will add value.

Founders with whisper ideas can’t do this. They soon realize that they don’t have enough time to learn the nuances of the customer needed to build something small, simple, and useful. So they build something big and hope it resonates — ClassPass for meditation. Their margin for error is zero. Which leads to that second question ...

2. Does this mean I can only start something in a space where I’m already an expert?

If you want to give yourself the best shot at success, yes.

I subscribe to the so-called “growth mind-set,” which is all about staying open to learning new things, so it pains me to say that founders should only pursue ideas in areas where they already have overwhelming expertise. But that’s how it goes! You’ll need to learn a ton as you build. You’ll need all your energy focused on learning the nuances of a space, not the space itself.

Of course, you can also hire for this. You may have some insight into the consumer side of the lunch-delivery business. If you want to leverage that insight, you better partner with someone who has food-sourcing knowledge and experience with that supply chain, or you’ll end up spending all the sand that insight provided you on learning the nuances of the industry.

The startup idea you pursue should be one you’ve been unconsciously preparing for your whole life. It should be about your strengths, not just a gap you see in a market. What are you, uniquely, incredible at? What do you know that no one else does? The first thing you should ask yourself when you have an idea is, “Why am I the best person to start this?”

If you ever find yourself sitting in a coffeeshop, quietly pitching your startup idea while side-eyeing everyone else within earshot—stop. Whisper ideas never work. But there’s undoubtedly an idea that you’re the best person in the world to pursue. One that you can scream from the rooftops. Find it.

Brian Scordato is the founder of Tacklebox Accelerator, a four-week program in New York City for early-stage founders (many of whom have full-time jobs) to go from idea to validated product. He teaches at General Assembly, and loves Tar Heel basketball.