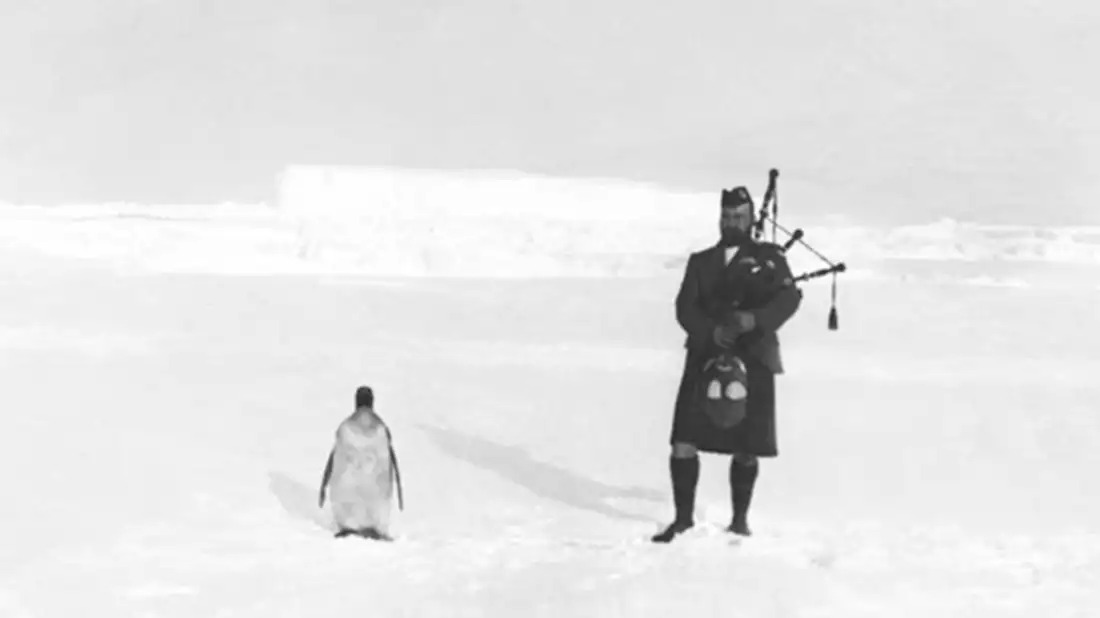 In 1902, Scotland sent explorers on an official national expedition to Antarctica, headed up by polar scientist and naturalist William S. Bruce. In a uniquely Scottish twist, the two-year-long Scottish National Antarctic Expedition included a position that probably no other country found necessary: an official piper.

Gilbert Kerr, the official piper of the Scotia crew, was tasked with maintaining morale—but he became a postcard icon by posing for the photo above, in which he played the bagpipes in full Highland dress next to an Emperor penguin. The bird, according to the Royal Scottish Geographic Society, “was tethered to a large cooking-pot packed full of snow.” The photograph was taken by Bruce in March 1904 while the Scotia was stuck in the ice on the Weddell Sea.

The idea of Kerr bringing out the bagpipes for a bunch of penguins was apparently also intended to test the effect of music on them, according to the 1906 record of the voyage by Bruce and other members of the expedition, The Voyage of the ‘Scotia’: Being the Record of a Voyage of Exploration in Antarctic Seas. The penguins were not impressed. The explorers wrote that “there was no excitement, no sign of appreciation or disapproval, only sleepy indifference.” They further noted that “it was just all that one man could do to lead one up to the ship: with their beaks they bit fairly hard, and with their long flipper-like wings could hit out decidedly hard.” Kerr's bagpipes were later donated to a Scottish battalion during World War I and lost at the Battle of the Somme.

These days, of course, polar explorers would not be allowed to tie a penguin to a pot for a photo op. All Antarctic wildlife is protected, and the continent is a nature preserve. However, in Antarctic weather, it’s possible that the man in a kilt (it’s hard to tell in black and white, but those look like bare legs above his socks) was almost as uncomfortable as the wild penguin tied to a kitchen pot. And who knows which poor crew member got bitten in the process.

Shaunacy Ferro is an associate editor at Mental Floss. Her work has previously appeared in Fast Company, Popular Science, and Architect magazine, among others.