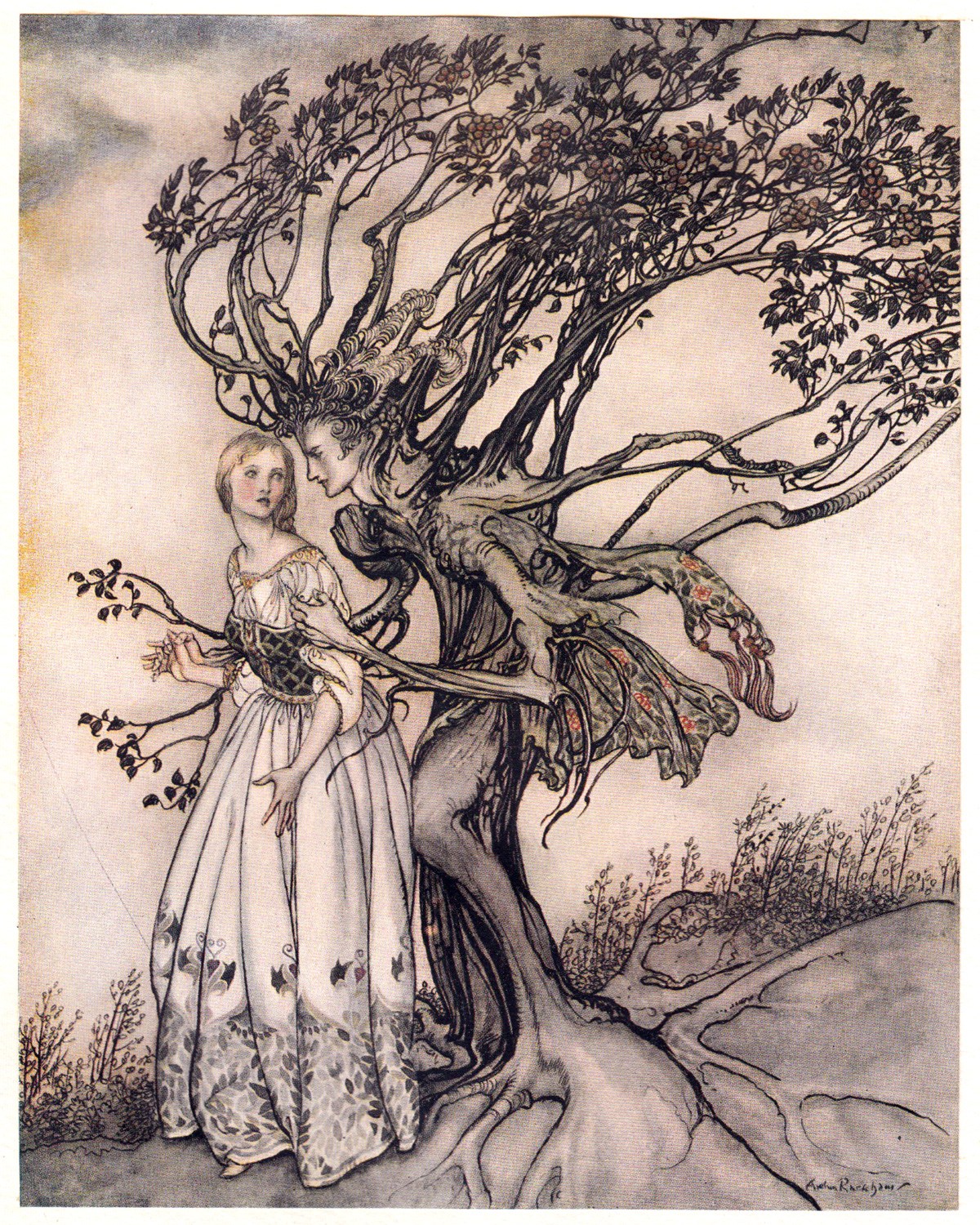 Illustration by Arthur Rackham for a rare 1917 edition of the Brothers Grimm fairy tales.

“Trees speak to the mind, and tell us many things, and teach us many good lessons,” an English gardener wrote in the seventeenth century. “When we have learned how to listen to trees,” Hermann Hesse rhapsodized two centuries later in his lyrical love letter to our arboreal companions, “then the brevity and the quickness and the childlike hastiness of our thoughts achieve an incomparable joy.” 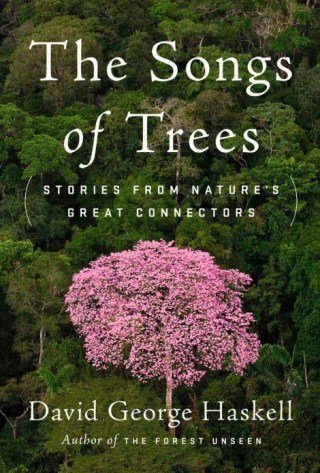 For biologist David George Haskell, the notion of listening to trees is neither metaphysical abstraction nor mere metaphor.

In The Songs of Trees: Stories from Nature’s Great Connectors (public library), Haskell proves himself to be the rare kind of scientist Rachel Carson was when long ago she pioneered a new cultural aesthetic of poetic prose about science, governed by her conviction that “there can be no separate literature of science” because “the aim of science is to discover and illuminate truth,” which is also the aim of literature.

It is in such lyrical prose and with an almost spiritual reverence for trees that Haskell illuminates his subject — the masterful, magical way in which nature weaves the warp thread of individual organisms and the weft thread of relationships into the fabric of life.

For the Homeric Greeks, kleos, fame, was made of song. Vibrations in air contained the measure and memory of a person’s life.

To listen was therefore to learn what endures.

I turned my ear to trees, seeking ecological kleos. I found no heroes, no individuals around whom history pivots. Instead, living memories of trees, manifest in their songs, tell of life’s community, a net of relations. We humans belong within this conversation, as blood kin and incarnate members. To listen is therefore to hear our voices and those of our family.

To listen is therefore to touch a stethoscope to the skin of a landscape, to hear what stirs below.

Photographs from Cedric Pollet’s project Bark: An Intimate Look at the World’s Trees.

Haskell visits a dozen gloriously different trees from around the world — from the hazel of Scotland to the maples of Tennessee to the white pines of Japan’s Miyajima Island — to wrest from them wisdom on what he calls “ecological aesthetics,” a view of beauty not as an individual property but as a relational feature of the web of life, belonging to us as we to it. (Little wonder that trees are our mightiest metaphor for the cycle of life.) From this recognition of delicate mutuality arises a larger belonging, which cannot but inspire a profound sense of ecological responsibility.

We’re all — trees, humans, insects, birds, bacteria — pluralities. Life is embodied network. These living networks are not places of omnibenevolent Oneness. Instead, they are where ecological and evolutionary tensions between cooperation and conflict are negotiated and resolved. These struggles often result not in the evolution of stronger, more disconnected selves but in the dissolution of the self into relationship.

Because life is network, there is no “nature” or “environment,” separate and apart from humans. We are part of the community of life, composed of relationships with “others,” so the human/nature duality that lives near the heart of many philosophies is, from a biological perspective, illusory. We are not, in the words of the folk hymn, wayfaring strangers traveling through this world. Nor are we the estranged creatures of Wordsworth’s lyrical ballads, fallen out of Nature into a “stagnant pool” of artifice where we misshape “the beauteous forms of things.” Our bodies and minds, our “Science and Art,” are as natural and wild as they ever were.

We cannot step outside life’s songs. This music made us; it is our nature.

Our ethic must therefore be one of belonging, an imperative made all the more urgent by the many ways that human actions are fraying, rewiring, and severing biological networks worldwide. To listen to trees, nature’s great connectors, is therefore to learn how to inhabit the relationships that give life its source, substance, and beauty. 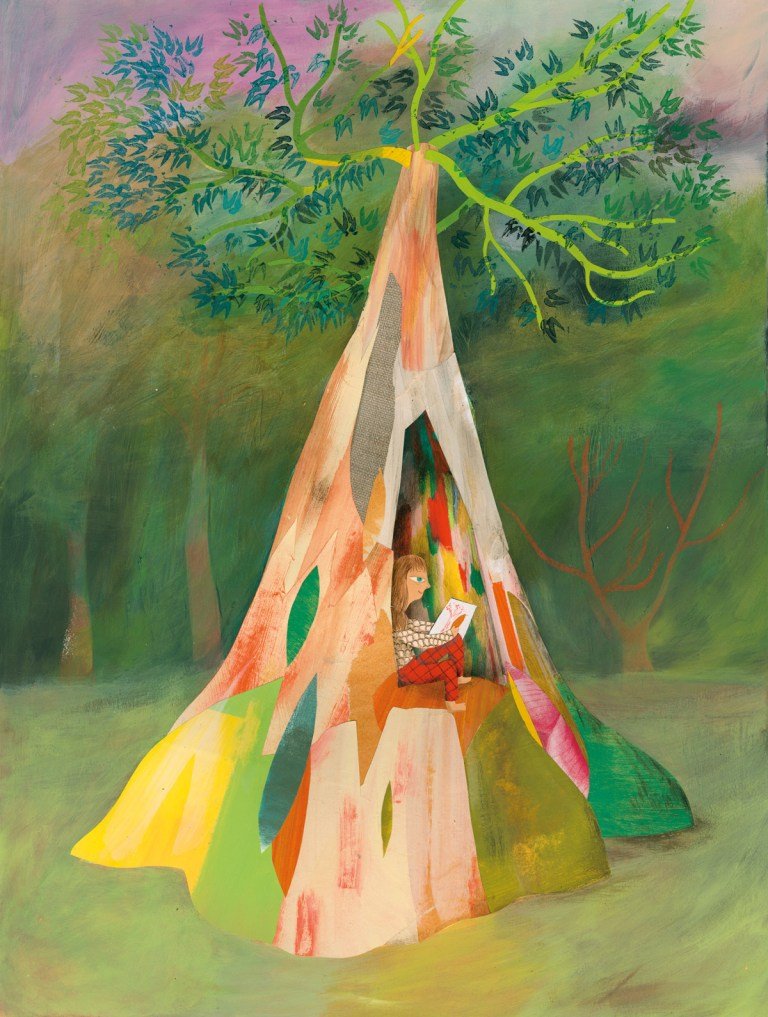 Art by Cécile Gambini from Strange Trees by Bernadette Pourquié, an illustrated atlas of the world’s arboreal wonders.

Haskell follows the thread of relationship to the lushest arboreal habitat in the world — a symphonic sixteen-thousand-square-kilometer expanse of Amazonian rainforest in a wildlife and ethnic reserve in Ecuador, where a single hectare contains more tree species than the whole of North America. He limns this otherworldly wonderland, transliterating its peculiar language:

Amazonian rain differs not just in the volume of what it has to tell — three and a half meters dropped every year, six times gray London’s count — but in its vocabulary and syntax. Invisible spores and plant chemicals mist the air above the forest canopy. These aerosols are the seeds onto which water vapor coalesces, then swells. Every teaspoon of air here has a thousand or more of these particles, a haze ten times less dense than air away from the Amazon. Wherever people aggregate in significant numbers, we loose to the sky billions of particles from engines and chimneys. Like birds in a dust bath, the vigorous flapping of our industrial lives raises a fog. Each fleck of pollution, dusty mote of soil, or spore from a woodland is a potential raindrop. The Amazon forest is vast, and over much of its extent the air is mostly a product of the forest, not the activities of industrious birds. Winds sometimes bring pulses of dust from Africa or smog from a city, but mostly the Amazon speaks its own tongue. With fewer seeds and abundant water vapor, raindrops bloat to exceptional sizes. The rain falls in big syllables, phonemes unlike the clipped rain speech of most other landmasses.

We hear the rain not through silent falling water but in the many translations delivered by objects that the rain encounters. Like any language, especially one with so much to pour out and so many waiting interpreters, the sky’s linguistic foundations are expressed in an exuberance of form: downpours turn tin roofs into sheets of screaming vibration; rain smatters onto the wings of hundreds of bats, each drop shattering, then falling into the river below the bats’ skimming flight; heavy-misted clouds sag into treetops and dampen leaves without a drop falling, their touch producing the sound of an inked brush on a page. 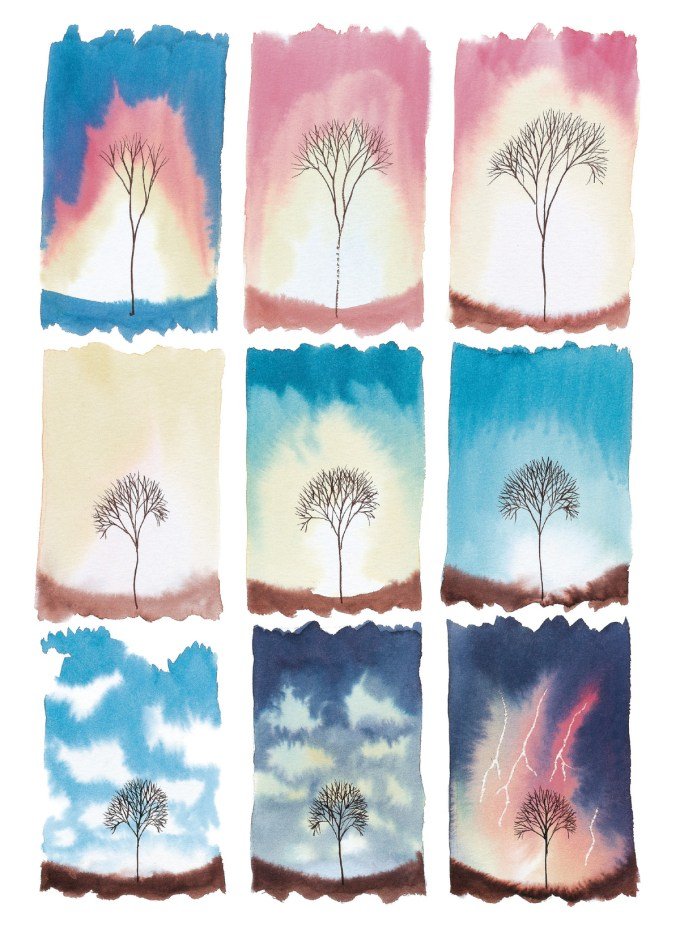 Art by Alessandro Sanna from Pinocchio: The Origin Story.

The tree itself stands as an acoustic microcosm of the rainforest:

In the ceibo’s crown, botanical acoustic diversity is present, but it is more subtle. Drops are smaller and create a sound like river rapids in the leaves of the many surrounding trees, obscuring variations in the sounds of individual leaves. Because I’m standing high up in the branches of an emergent tree, a tree that arches over all others, the sound of the river rapids comes from beneath my feet. I feel inverted, like an image in a teardrop, disoriented by hearing forest rain under my soles. My ascent, up a forty-meter series of metal ladders, has carried me through the rain layers: The sounds of rain on litter and understory plants fade a meter or two above the ground, replaced by the spare, irregular spat of drops on sparse leaves, stems reaching up to the light, and roots drilling down. At twenty meters up, the foliage thickens and the rapids begin. As I climb higher, the sounds of individual trees push forward, then recede, first a speed-typist’s clatter from a strangler fig, then rasping drops glancing across hirsute vine leaves. I top the rapids’ surface and the roar moves below me, unveiling patters on fleshy orchid leaves, greasy impacts on bromeliads, and low clacks on the elephant ears of Philodendron. Every tree surface is crowded with greenery; hundreds of plant species inhabit the ceibo’s crown.

In the ceibo Haskell finds a living testament to the nonexistence of the self to which we humans so habitually cling. A century after young Jorge Luis Borges contemplated how the self dissolves in time and relationship, Haskell writes:

This dissolution of individuality into relationship is how the ceibo and all its community survive the rigors of the forest. Where the art of war is so supremely well developed, survival paradoxically involves surrender, giving up the self in a union with allies.

The forest is not a collection of entities… it is a place entirely made from strands of relationship.

The Songs of Trees is a resplendent read in its entirety, kindred to both Walt Whitman’s exultation of trees and bryologist Robin Wall Kimmerer’s poetic celebration of moss. Complement it with the fascinating science of what trees feel and how they communicate, then revisit my eulogy for a beloved tree and this illustrated atlas of the world’s most unusual trees.