The Romantic Venus We Never Knew

Venus used to be as fit for life as Earth.

On the day that I was born—winter solstice, 1959—a headline in Life magazine proclaimed “Target Venus: There May be Life There!” It told of how scientists rode a balloon to an altitude of 80,000 feet to make telescope observations of Venus’s atmosphere, and how their discovery of water raised hopes that there could be living things there. As a kid I thrilled to tales of undersea adventure with telepathic Venusian frogs in Isaac Asimov’s juvenile science-fiction novel Lucky Starr and the Oceans of Venus. In 1975, when I was 15, a family friend—a planetary scientist—gave me a picture of the first-ever photograph taken from the surface of another planet: Venus. The Soviet Venera 9 probe had sent back a black-and-white image of a landscape with angular rocks and fine-grained dirt. A bright patch of sky made it seem much less unearthly than the Apollo moon shots I had obsessed over, and more like a strange, overcast desert land that you might hope to visit someday.

For many of my peers, though, Venus quickly lost its romance. The very first thing that scientists discovered with a mission to another planet was that Venus was not at all the Earthly paradise that fiction and speculative science had portrayed. It is nearly identical to our own planet in bulk properties such as mass, density, and size. But its surface has been cooked and desiccated by a suffocating ocean of carbon dioxide. Trapped in the scorching death-grip of a runaway greenhouse effect, Venus has long been held up as a cautionary tale for everything that could go wrong on a planet like Earth. As a possible home for alien life, it has been voted the planet least likely to succeed. 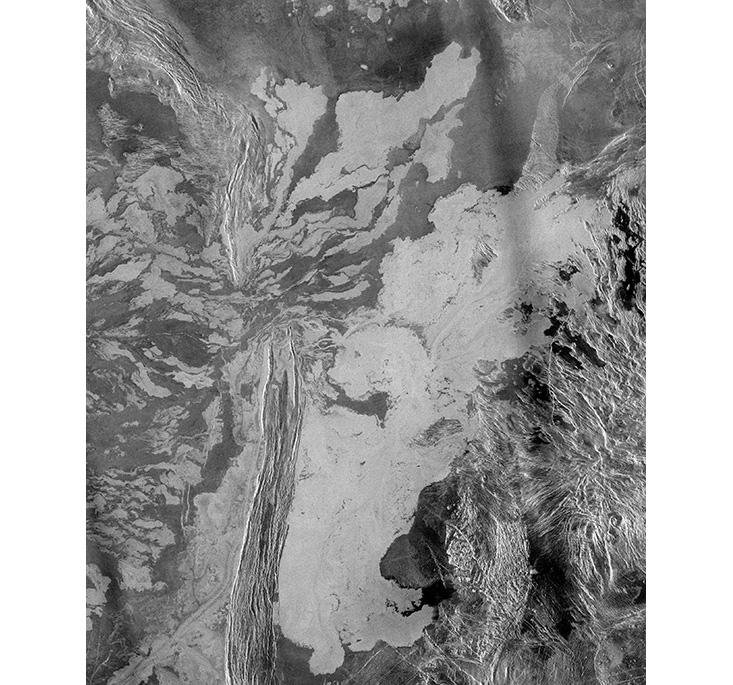 Geologically Alvive: Lava flows have repaved the Venusian surface in geologically recent times, before which the planet may well have hosted a vibrant ecosystem. Photo by NASA/JPL.

But I have refused to give up on Venus, and over the years my stubborn loyalty has been vindicated. The rocky vistas glimpsed by Venera 9 and other Russian landers suggested a tortured volcanic history. That was confirmed in the early 1990s by the American Magellan orbiter, which used radar to peer through the planet’s thick clouds and map out a rich, varied, and dynamic surface. To judge from the paucity of impact craters, the surface formed mostly in the last billion years, which makes it fresher and more recently active than any rocky planet other than Earth. Russian and American spacecraft also found hints that the primordial climate might have been wetter, cooler, and possibly even friendly to life. Measurements of density and composition imply that Venus originally formed out of basically the same stuff as Earth. That presumably included much more water than the trace equivalent to one thousandth of 1 percent of Earth’s oceans that we find wafting in the thick air today.

Confirmation comes from the measured ratio of deuterium (heavy hydrogen) to normal hydrogen. Venus’s atmosphere has proportionately much more deuterium than Earth’s does. This skew is a sign that the planet’s hydrogen has gradually escaped to space; deuterium, being heavier, leaks out more slowly than its lighter cousin, so that a difference builds up over time. Winding the clock backward, Venus must once have had much more hydrogen which is to say, much more water.

Thus our picture of Venus at around the time life was getting started on Earth is one of warm oceans, probably rich with organic molecules, sloshing around rocky shores and volcanic vents. Stellar-evolution theory predicts the sun was considerably less bright back then. So, Venus was arguably a cozier habitat for life than Earth. As the sun gradually warmed, water spent more time in the atmosphere than on the surface. Because water vapor is a powerful greenhouse gas, this led to more warming, which in turn led to more evaporation creating a powerful positive feedback. After the sun reached a certain level of brightness, the process became irreversible. The oceans completely boiled off, solar radiation split water into hydrogen and oxygen, the hydrogen escaped into space, and the oxygen either escaped along with it or got swallowed up by surface minerals. The result is the dried-out hellhole we see today.

Venus may have been the nearest habitable planet.

The decline took time. My colleagues and I have applied global circulation models the same kind we use to study climate change on Earth to Venus. When we include details such as cloud formation, global winds, topography, and planetary rotation, our models tell us that Venus could have remained oceanic and habitable for much longer than previously thought perhaps for substantially longer than Mars ever was. The planet spontaneously develops a pattern of cloudiness that protects it from the effects of the warming sun. The sunward side becomes covered with bright clouds, which reflect incoming sunlight. The night side stays largely cloud-free, which allows the planet to cool by emitting thermal radiation to deep space. A lot of this depends on details about the past topography, spin rate, and atmospheric composition that we still have to guess at until we have better data from new missions.

The implications are startling. For most of Earth’s history, Venus may have been the nearest habitable planet and possibly even home to a thriving biosphere. For billions of years, our solar system may have had two neighboring wet, geologically active, habitable rocky worlds. They may even have very occasionally exchanged life when meteors struck and catapulted shrapnel from one planet to the other.

Yet Venus’ grim reputation persists, and both NASA and its Russian counterpart have backed off from studying the planet. The U.S. has not had a Venus mission since Magellan, which was launched in 1989, 27 years ago. But other countries have gotten into the game. In the summer of 2006, I received a letter from Paris that changed my life. It began: “I have pleasure in informing you that, after a very thorough peer review process, you have been selected as Interdisciplinary Scientist (IDS) for the VENUS EXPRESS mission.” Signed by the Coordinator of Solar System Missions for the European Space Agency, it concluded by summoning me to a meeting one week later in Darmstadt, Germany. 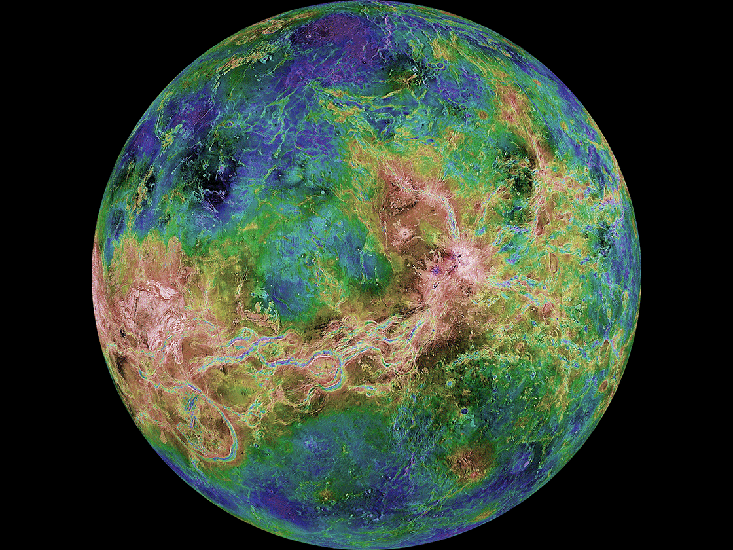 Vibrant Venus: A false-color radar image of Venus from the Magellan orbiter, supplemented with Earth-based radar. Photo courtesy of NASA/JPL/USGS.

Yes! I thought. I am going to Venus. (By way of Darmstadt.) And so it was that I, a token American astrobiologist, joined the science team for Venus Express, Europe’s first effort to explore the nearest and most Earth-like other planet. The plucky little spacecraft spent eight years in orbit around our sister planet, studying an alter-Earth with a greenhouse climate gone completely mad, constantly shifting cloud patterns, immense tornado-like vortices chaotically dancing around the poles, intense electrical storms, and we’re pretty sure active volcanoes.

Venus was arguably a cozier habitat for life than Earth.

The Japanese space agency JAXA launched its own spacecraft, Akatsuki, but when the probe arrived at Venus in 2010, it failed to go into orbit and instead caromed around the sun. In a technical feat that ranks up there with the recovery of Apollo 13, the agency recovered control of the mission and coaxed it into Venus orbit in 2015. Now it is further enriching our understanding of the vibrant changeable atmosphere and clouds and searching for additional hints of a volcanically active surface.

These smaller missions by newly space-faring countries have kept Venus exploration alive. It seems that Venus, like Earth, still pulses with internally generated geological activity. Yet we need new NASA missions to discover what Venus really has to tell us about how it evolved. What it tells us will aid the wider study of Earth-like planets. It will be a long time generations before we see any planets beyond our solar system up close, but in the meantime we can explore the planets of our own solar system. We can use detailed observations of the few planets we can get to now to calibrate our necessarily sparse observations of planets elsewhere in the Galaxy.

With the technological advancements in spacecraft instrumentation made in the nearly three decades since the last American Venus mission, we can imagine building new spacecraft that could survive the planet’s rigors. We could send an innovative orbiter to image the surface with new clarity in radar and infrared, seeking signs of current geologic activity. We could seek the traces of a lost ocean and biosphere with an atmospheric probe that measures chemical isotopes. With balloons floating in the clouds we could examine the extreme climate in the process, equipping ourselves to comprehend Earth’s present and future climates. With surface landers, we could drill into the rocks, examine the minerals, and learn their histories. 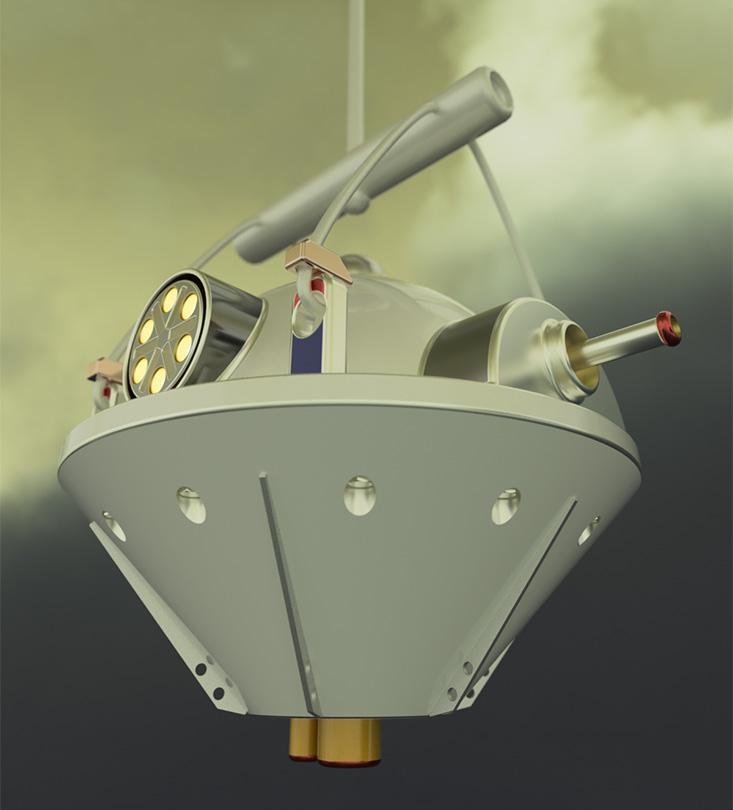 Up, Up, and Away: A balloon-borne probe could be floating around Venus for weeks or longer, measuring and monitoring atmospheric composition conditions. Photo by Tibor Balint.

I am heartened by NASA’s renewed interest in these missions and hopeful that a new era of American participation in the exploration of this neighboring planet will soon commence. There is one more huge reason why I feel that this exploration is essential. My own work in comparative planetology has recently turned increasingly toward understanding the transformation our own planet is now experiencing by our own machine-enabled hands. We need deeper knowledge of climate evolution in order to be good stewards of Earth. But we will never fully understand our planet, or our own role in its evolution, in a vacuum. We need a point of comparison. Venus provides one. It is a natural laboratory to test our models and hone our understanding of extreme climate change.

If we really want to know how our home planet, with its teeming, sopping-wet biosphere, fits into the rest of the universe, we need a program of Venus exploration. Those science-fiction dreams of a wet and living Venus may really exist, somewhere in time. But whether or not Venus was once alive, its continued exploration is one of our best ways to discover how unique our own planet really is, to give context to our growing knowledge of Earth-like planets around the galaxy, and to refine our understanding of climate change on planets like our own.

David Grinspoon is a senior scientist at the Planetary Science Institute. He serves on the science teams for several active and proposed interplanetary spacecraft missions. In 2013 he was appointed as the inaugural chair of astrobiology at the U.S. Library of Congress. His book, Earth in Human Hands, was published in December 2015. Also a musician, he plays guitar for the House Band of the Universe.