The Most Important Album of 1968 Wasn’t The White Album. It Was Beggars Banquet.

It saved the Rolling Stones and altered the trajectory of music history. 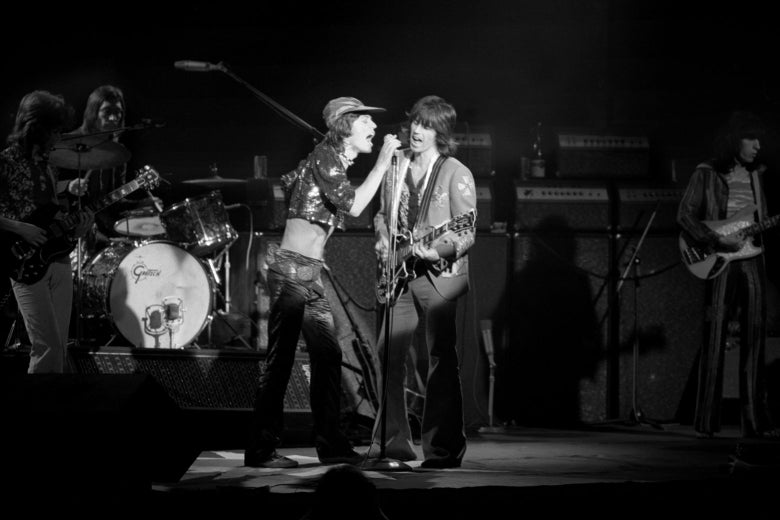 Mick Jagger and Keith Richards of the Rolling Stones on March 18, 1971, at the Round House in London. Photo from AFP/Getty Images.

“I give the Stones about two years,” a 20-year-old Mick Jagger remarked to an interviewer in June of 1964. All these years later, the quote has become one of the wrongest predictions in music history, given the Rolling Stones legacy as rock ’n’ roll’s resident avatars of parodic longevity. In the summer of 1964, though, it would have been totally reasonable to wonder if the Stones even had two more years in them. Jagger and Keith Richards had only just recently begun writing original songs and hadn’t had an American hit yet. They were still a year away from “(I Can’t Get No) Satisfaction,” their first No. 1 in the U.S., which would kick off a run of eight Top 10 singles in less than two years. And they were four years away from Beggars Banquet, the album that would revitalize their careers and, to no small degree, alter the trajectory of a genre.

One could argue until the cows come home over what the greatest album of 1968 is: Lady Soul, Music From Big Pink, The White Album, Electric Ladyland, and Astral Weeks all deserve a place in the conversation, to name just a few. But Beggars Banquet might have been the most consequential. It was the first work to show that a rock act could reinvent itself in the face of irrelevance, the first great “comeback” album of the genre, and the earliest indication that rock ’n’ roll lives might be capable of something like second acts. At the end of a year that saw an explosion of double albums and single tracks that took up the better part of an LP side, all adorned with ever-newer forms of sonic gadgetry that promised musical corollaries to other consciousness-expanding materials of the day, it was a mostly acoustic album steeped in blues, folk, rockabilly, and other, more inscrutable influences that it felt like the band had conjured from some ragged musical beyond. It was mature, painstaking, and ferociously intelligent, all things the Stones had rarely been previously accused of being. It was, weirdly, from a band who’d spent their early years as the music’s foremost exemplars of incorrigible youth, a road map toward something like adulthood that didn’t involve quitting the road and gradually disintegrating, a route their more-famous countrymen had recently taken. The Rolling Stones are now in their sixth decade of touring behind the slogan of the “World’s Greatest Rock ’n’ Roll Band.” Beggars Banquet was the first work that rendered this claim credible.

The Rolling Stones of 1968 can’t really be understood without discussing the Rolling Stones of 1967. That year, the Beatles had released Sgt. Pepper’s Lonely Hearts Club Band; Aretha Franklin, Jimi Hendrix, and the Doors had all rocketed to stardom; and the enormously successful Monterey Pop Festival and the attendant “Summer of Love” offered the strongest evidence yet that a revolution was enfolding in youth culture.

For the Rolling Stones, however, 1967 had been a year of personal turmoil and professional humiliation. In February, Jagger and Richards were ensnared in a drug bust that kept them in the glare of the British tabloids for the better part of the year. Richards began an affair with Anita Pallenberg, the ex-girlfriend of bandmate Brian Jones. (Richards and Pallenberg would remain together for more than a decade.) The once-prolific band’s productivity slowed, and given the explosion of innovation happening around them, the Rolling Stones quickly began to seem on the sidelines of history. So they did what all FOMO-afflicted midtwentysomethings do: They tried too hard. A new album finally arrived in December 1967, Their Satanic Majesties Request, an ill-advised attempt at Pepper-style psychedelia that was derided by critics and sold fewer copies than any album they’d made to date. Many wondered aloud whether the Stones were done, and who could blame them? This Jim Morrison kid was better-looking than Jagger anyway.

It was the earliest indication that rock ’n’ roll lives might be capable of something like second acts.

Then, in May 1968, the Rolling Stones returned with a new single. Produced by an American expat, Jimmy Miller, whom the Stones had enlisted after firing longtime manager Andrew Loog Oldham, “Jumpin’ Jack Flash” sounded like nothing the band had ever made before. It was lean and pummeling, a churning cauldron of distorted guitar, off-kilter chord changes, shakers on the bridge, and sneering, slurred vocals. “Jumpin’ Jack Flash/ It’s a gas, gas, gas” were the only words most people could decipher, and no one knew what they meant. No matter. It went to No. 1 in the U.K. and topped out at No. 3 on the Billboard Hot 100, kept out of the top slot by tracks like Herb Alpert’s “This Guy’s in Love With You,” Cliff Nobles & Co.’s “The Horse,” and Gary Puckett and the Union Gap’s godawful “Lady Willpower,” a fact you should feel free to mention the next time someone waxes nostalgic about what great taste everyone had in the 1960s.

When Beggars Banquet arrived in December, it was easy to assume it would continue this move into dark aggression. The album’s lead single, “Street Fighting Man,” released in the States in August, had boasted a sleeve featuring a graphic image of police brutality that had caused it to be quickly removed from shelves, and the song was widely banned from radio play in the wake of the unrest at the 1968 Democratic National Convention.

But instead, Beggars Banquet arrived with the most diverse, searching, and deceptively ambitious collection of music the Stones had ever made. It found the group straying down the corridors of country and folk on tracks like “No Expectations,” “Dear Doctor,” and “Jigsaw Puzzle.” By 1968, Brian Jones was already withdrawing from the band, his alienation fueled by creative disillusionment and substance abuse. On Beggars Banquet, the last album the Stones released during his lifetime, Jones plays guitar on only four of the album’s 10 tracks.

Jones’ creeping divestment opened the door for Richards to more fully assume the role of the band’s creative conscience. Richards’ soul is all over Beggars: riff-obsessed, compulsively rhythmic, and exquisitely musical. The same guy who plays the heavens-rattling acoustic guitar that opens “Street Fighting Man” plays the Jamerson-ian bass line on “Sympathy for the Devil.” He plays the electric guitars that sound like actual cats on “Stray Cat Blues”—all of them—and even croaks the opening lines of “Salt of the Earth,” the album’s closer, which might be the most convincing attempt at “political” songwriting in the Stones’ catalog.

Richards’ guitar solo on “Sympathy” is one of the most celebrated in history, and for good reason. It’s perhaps the first truly inimitable instrumental moment on any Stones record, its funky, squawking audacity carrying traces of Hubert Sumlin and Scotty Moore but filtered through an utterly unique musical mind. It’s fitting that it arrives less than three minutes into the album’s first track, as Beggars Banquet was also the first Stones record that sounded like it couldn’t have been made by anyone else in the world—not the Delta and Chicago bluesmen that the Stones worshipped, not the R&B virtuosi of Stax and Muscle Shoals, and certainly not the Beatles, whose shadow had loomed over the group since 1963.

Jagger had always been a good lyricist, as earlier hits like “19th Nervous Breakdown,” “Get Off of My Cloud,” and “Satisfaction” demonstrated, but Beggars found him in new territory altogether. The refrains from tracks like “Sympathy” and “Street Fighting Man” are so engrained in the cultural consciousness that it’s almost impossible to imagine them as being new: “Pleased to meet you/ hope you guess my name,” “but what can a poor boy do/ ’cept to sing for a rock and roll band?” But the writing in the verses is where it’s really at: “I watched with glee while your kings and queens/ fought for 10 decades over the gods they made.” Or the Martha and the Vandellas shoutout in the second line of “Street Fighting Man,” “ ’cause summer’s here and the time is right for fighting in the street,” and the perversely reverent sneer on that one-word change. 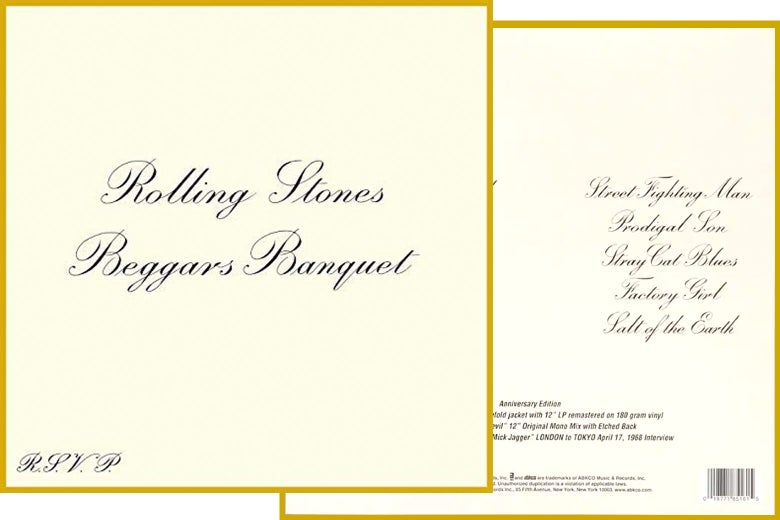 “Sympathy for the Devil” had originally been written with the line, “I shouted out, ‘Who killed Kennedy?’/ when after all, it was you and me,” a lazily edgy reference to the assassination of JFK five years prior. In the middle of recording the song in June of 1968, news arrived that Robert Kennedy had been assassinated in California. A lot of bands would have removed the line, lest it come off as opportunistic shockmongering; Jagger opted to make it plural. That one enormously problematic line edit turned “I shouted out, ‘Who killed the Kennedys?’ ” into one of the most arresting lyrics Jagger ever sang, its capacious ambiguity suddenly infinitely more evocative. (“Compromise solution,” indeed.)

If there is a song that, to my ears, epitomizes Beggars Banquet, one that feels so inimitably Stones and is also the most difficult to imagine them creating prior to this album, it’s “Factory Girl,” the penultimate track that clocks in at just a wink over two minutes. It’s a mostly acoustic number, with Charlie Watts playing tabla and Ric Grech of Family sitting in on fiddle. But the real standout is Richards’ acoustic guitar playing, an exquisite performance that harnesses the percussive capacities of the instrument while letting jagged articulations of melody bleed through.

Beggars Banquet was also the first Stones record that sounded like it couldn’t have been made by anyone else in the world.

On Dec. 6, 1969, exactly one year to the day after the release of Beggars Banquet (you really can’t make this stuff up), the Rolling Stones played a free concert at Altamont Speedway where teenage Stones fan Meredith Hunter was stabbed to death by a member of the Hells Angels. The Altamont horror soon became a metaphorical shorthand for the death of the ’60s that would cling to the Stones’ legacy for decades after, and not without justification. But the ’60s were never going to last, a fact that the Rolling Stones were forced to reckon with earlier than most. Beggars Banquet is the sound of feet getting wet.

Jack Hamilton is Slate’s pop critic and assistant professor of American studies and media studies at the University of Virginia. He is the author of Just Around Midnight: Rock and Roll and the Racial Imagination.