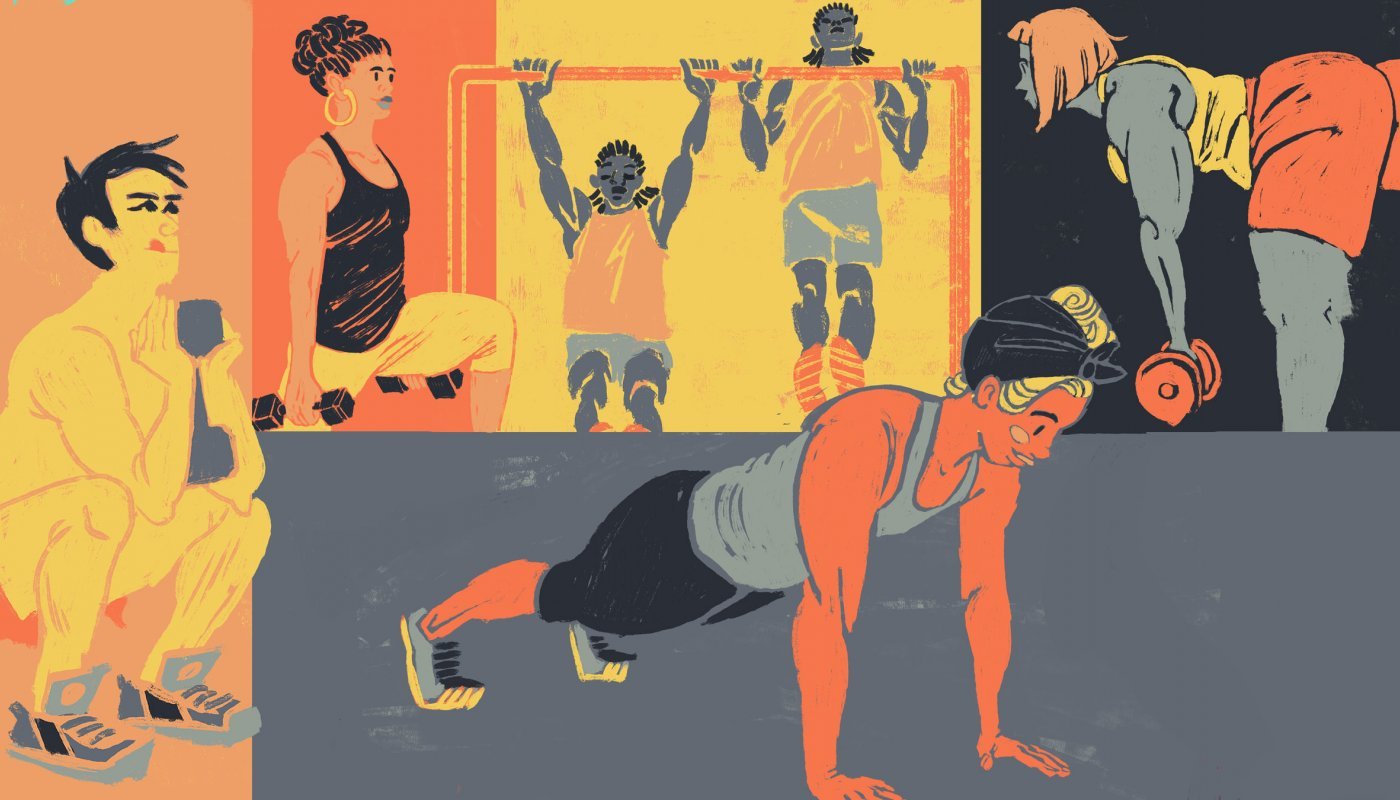 If you’re willing to buy a kettlebell, some dumbbells, and a pull-up bar, you don’t even need to leave your home to do this minimalist workout. Illustrations by Erin Wilson.

Like most athletes who would rather be outdoors running, riding, swimming, or hiking, I don’t set aside much time for the gym. Yet I fully realize the importance of building general strength and mobility—not just to support my outdoor activities, but also for everyday health and fitness. I’d like to be able to unload groceries, haul suitcases up and down stairs, and bend over to put on my shoes well into my eighties. That means I have to go to the gym a few days a week. But when I’m there, I try to focus solely on the essentials. (If you’re willing to buy a kettlebell, some dumbbells, and a pull-up bar, you don’t even need to leave your home.)

Thinking I might be on to something good—but far from sure—I recently worked up the courage to put my 35-to-40-minute routine to the ultimate test: Twitter.

The response was overwhelmingly positive, and a handful of experts liked or retweeted the post. I wanted to learn more about why they agreed, so I reached out to some of the best in the business for details.

Here’s a closer look at the routine and some additional insight from the pros. Lord recommends going through this workout at least twice a week, starting by doing three sets of each exercise (with one to two minutes of rest in between) before moving to the next. As for how many reps you should do in each set, Lord says to pick a number that will leave you fatigued by the end of the last set, but not so tired that your form is falling apart. For the exercises that involve dumbbells, select a weight that will put you in the six-to-12-rep range, he says.

As you get stronger, increase the weight or up the reps. According to Bartholomew, doing so will help promote continuous adaptation. If you want to add an aerobic boost to the workout, Gambetta suggests either adding 30 seconds of rope jumping or running in place between each exercise or making the workout a circuit. (In other words: Rather than doing three consecutive sets of each exercise with prolonged rest between each set, do three rounds, going from one exercise to the next, with only ten to 15 seconds of rest.)

Grip the bar with your palms facing out and hands slightly wider than shoulder-width apart. Pull yourself up so your chin is above the bar. Hold for one second. Then extend all the way down so your arms are straight and elbows are locked. Throughout the movement, focus on keeping your core taut. You’ll know you’re achieving this because your legs won’t be swinging around. “Pull-ups are foundational, akin to eating your fruits and vegetables,” says Lord. “They include major muscles of the shoulders, upper back, and torso and train postural strength and core stability as much as the shoulders when performed properly.”

Stand with your legs slightly wider than shoulder-width apart, feet pointing slightly out. Hold a kettlebell by the horns, or a dumbbell with palms facing up, close to your chest. Squat down, keeping your heels on the ground. At the lowest point, your butt should be parallel to or just below your knees. Then push up to a standing positioning, locking your knees at the top. “This movement carries a low risk of injury and helps keep your body in alignment,” says Bartholomew. “Since the weight is held close to your chest, not only is it a great tactile reminder to keep proper posture while squatting, but it also allows you to easily put the weight down if fatigued.”

Begin with your chest down and palms pressing into the ground, thumbs at or a little outside of your nipples. Press up, locking your elbows at the top. Lower your back all the way down, so your chest hovers just a centimeter or two off the ground. Press up. Repeat. Be sure to tuck in your stomach and keep your core tight throughout the movement so you have minimal arch in your spine. “It seems simple, but when you break it down, a push-up is a great expression of core stability and connecting the upper and lower body,” says Lord. “A push-up is not only about strengthening your shoulders and chest, but also about strengthening your core; it’s like a dynamic plank.”

Stand straight, toes pointing forward, feet about six inches apart. If you’re using dumbbells to increase the challenge, hold an equal weight in each hand at your sides, arms straight. Step forward with either foot so your knee is above your ankle. Push through the heel of the forward leg to return to an upright standing positioning. Repeat, this time stepping down with the opposite leg. “Lunges target multiple muscle groups and transfer to many movements in daily life,” says Bartholomew. “You can also experiment with lateral lunges. It’s the same idea as a straight lunge, only you hold a single dumbbell at your chest and step out horizontally, lunging from side to side. This takes you out of straight-line movements, working other muscle groups that are often neglected by runners and cyclists.”

Stand on one leg, keeping your knee slightly bent. If you’re using dumbbells, hold them on the same side as the leg you’re standing on. Bend forward at the hip, extending your free leg straight behind you for balance. Continue lowering until your chest is parallel with the ground, dumbbell almost touching the floor. Then press back to an upright position. “This exercise brings it home as it combines the challenges of single-leg stability, lower-body mobility, strength, and posture,” says Lord.

Brad Stulberg (@Bstulberg) writes Outside’s Science of Performance column and is the author of the new book Peak Performance: Elevate Your Game, Avoid Burnout, and Thrive with the New Science of Success.