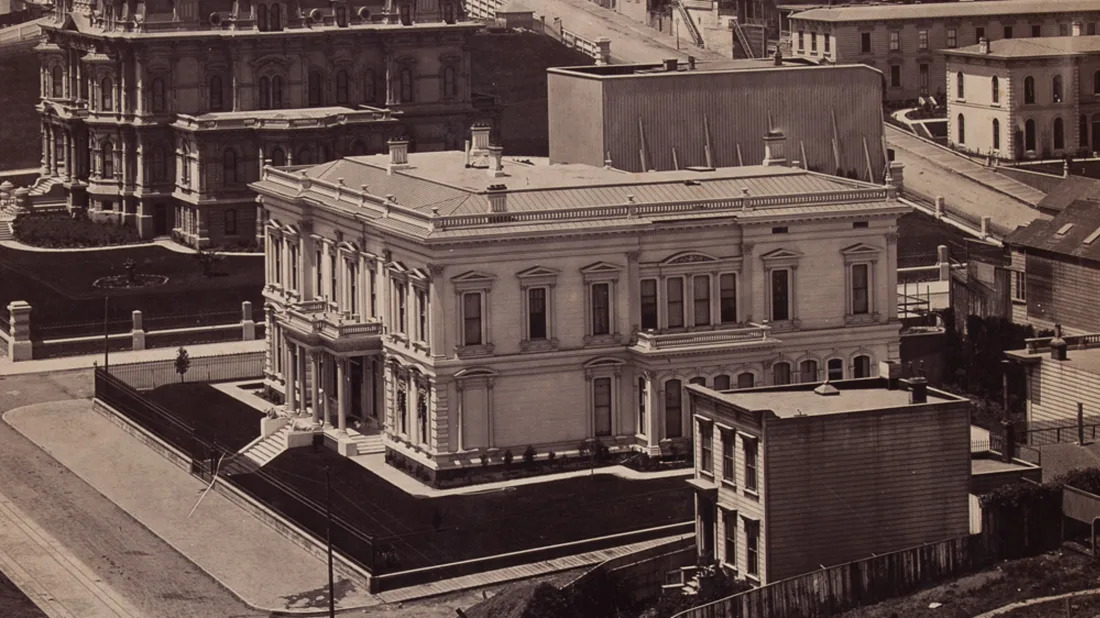 Photo courtesy of the Gawain Weaver Art Conservation. The original photo by Eadweard Muybridge is held at the Society of California Pioneers.

Nicholas Yung considered himself a lucky man. A German who immigrated to the United States in 1848, Yung had worked hard to carve out a living for himself and eventually prosper as the owner of a mortuary in San Francisco. The business allowed him and wife Rosina to purchase a modest lot on the top of California Street Hill, where they built a quaint, cottage-style home and planted a beautiful garden. Every day, California sunlight and fresh air would stream in through their windows.

Yung had no reason to believe that anything could interrupt his idyllic life, or that any one person could somehow deprive him of the beautiful days he had worked so hard to enjoy. But Yung also hadn’t accounted for Charles Crocker, a very rich and very petty man who would eventually become both his neighbor and the bane of his existence. With enough lumber to build a 40-foot-tall, blighting fence around much of Yung’s property, Crocker and his spite fence became a legendary revenge tale, a tourist attraction, and a lesson in the danger of escalating tempers. 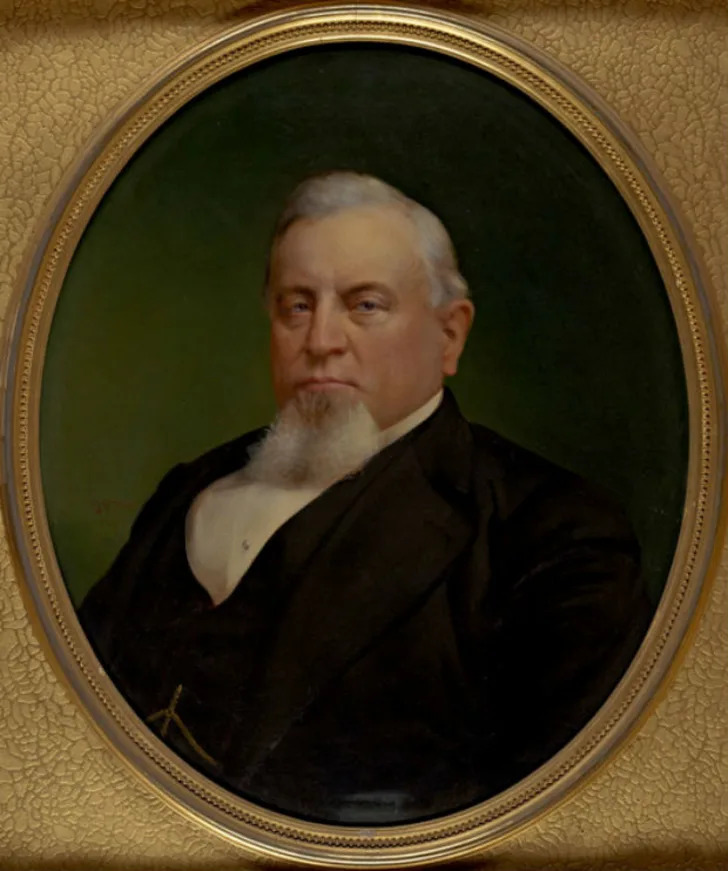 At 6 feet tall and 300 pounds, Charles Crocker cut an imposing figure. He had filled his bank account by being one of the "Big Four" barons behind the building of the Central Pacific Railroad. By the 1870s, he could afford whatever he desired. And what he wanted was to loom over San Francisco like a gargoyle.

Crocker and his wealthy partners began scouting California Street Hill for its scenic views and proximity to the city’s financial district. One of his "Big Four" associates, Leland Stanford—former governor of California and future founder of Stanford University—suggested that the area would make for a beautiful residential plot if a cable car could bring residents up and down the hill. Stanford arranged to have one installed, and soon a group of wealthy men, including Crocker, were buying up all the homes on their chosen blocks. By the time Crocker was finished, he had erected a 12,000-square-foot mansion. With its new, wealthy inhabitants, California Street Hill was renamed Nob Hill.

As the project neared completion in 1876, there was one nagging detail: On the northeast corner of the block, Nicholas Yung was reluctant to sell. His cottage was dwarfed by the mansions going up, but he had come to enjoy the neighborhood.

There are varying accounts of what happened next. Some say Crocker offered Yung $6000 for his slice of the block. After some deliberation, Yung agreed to sell the land for $12,000. Crocker countered with $9000; Yung declined. The other story is that Yung became irascible, agreeing to a $3000 transaction and then bumping up his price every time Crocker capitulated, first to $6000, then $9000, and finally $12,000. At this latter figure, Crocker was said to have balked, spewing profanity and walking away from negotiations.

With one or both men causing acrimony, the end result was that Yung was not moving. Crocker's workers were busy razing the entire block, creating a steamroller of activity that should have seen them swatting Yung’s cottage down like a cardboard box. In an ominous sign of his frustration, Crocker ordered his workers to arrange their dynamite blasts so that rock debris would pelt Yung’s house.

If the goal was to drive Yung away, it had the opposite effect. Yung doubled down, refusing to move. Crocker refused to raise his offer. The two men were at a stalemate. Although Yung's obnoxious negotiating methods didn't make him blameless, it was Crocker who had the means to provide a real disruption.

At a reported cost of $3000, Crocker had his workers construct a wooden fence on his land that towered over three sides of Yung’s home. With its 40-foot-tall panels, the enclosure acted like a window shade, blotting out the sun and cool air and immersing Yung in darkness.

While Crocker gleefully had gardeners decorate his side with ivy, Yung saw his beautiful garden wilt. Despite the obvious interruption of Yung's environment, Crocker’s “spite fence,” as the papers came to call it, was perfectly legal.

Without other recourse, Yung threatened to install a flagpole that would fly a skull and crossbones, an act of defiance that might help blight Crocker’s view; he also wanted to place a coffin on his roof, ostensibly for advertising his business, but clearly to agitate Crocker as well. He had some members of the media on his side, who condemned “Crocker’s Crime” and criticized the financier for using his immense wealth to bully a family of more modest means. The San Francisco Chronicle later called it a “memorial of malignity and malevolence.” Tourists would take the cable car and ride up to Nob Hill just to gawk at the massive fence. But Crocker wouldn’t budge.

In October 1877, the pro-labor Workingmen’s Party of California (WPC) organized a protest rally near Crocker’s home. Condemning his hiring of Chinese immigrants, organizers led 2000 men through a demonstration. One man, known only as Pickett, stood up and admonished Crocker for the spite fence, telling him it would be torn down by Thanksgiving or the WPC would do it for him. But when WPC leader Denis Kearney was arrested on another site for inciting a riot, he told the press that his group had no reason to target Crocker or his fence.

If Yung harbored any hope that some vigilante justice would resolve the situation, it never came to pass. He and his family threw in the towel and moved out—but they still refused to sell the land to Crocker. 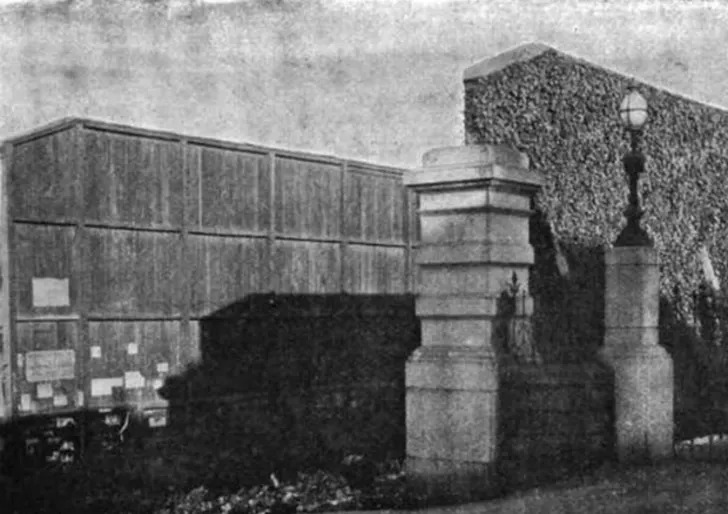 A look at the dark corner created by the spite fence. Photo from The Strand.

Crocker may have thought the feud would end with Yung’s death in 1880. It didn’t.

His widow, Rosina, continued to rebuff offers to sell the now-vacant land, which was slowly becoming a place for empty cans and other garbage. After Crocker passed away in 1888, his heirs were just as unsuccessful in persuading Rosina to let the land go. In 1895, she tried to appeal to the city's Street Committee, arguing that the fence was a nuisance and rendered her property worthless.

The city agreed, but their legal counsel didn’t: There was no justification for having the Crockers remove the fence, which had been cut down to 25 feet after strong winds had repeatedly threatened to topple it over. (In or around 1956, California would put a law on the books prohibiting the construction of fences meant for the express purpose of irritating neighbors and/or obstructing their views. Most states cap the height of a fence at 6 feet for similar reasons.)

When Rosina died in 1902, the rivalry appeared to die with her. Her four daughters finally gave in to Crocker's descendants in 1904, selling the land—said to be worth $80,000—for an undisclosed sum. With no more neighbors to spite, the fence was torn down in 1905.

In retrospect, the Yung/Crocker feud would ultimately prove pointless. In 1906, an earthquake and related fire swept through San Francisco, gutting the Crocker mansion and neighboring buildings. Rather than rebuild, the family decided to donate the block to charity.

In a strange twist, the place where Crocker had once built a monument to spite and malice became a home for compassion and warmth. In donating the site, the Crockers opened an opportunity to erect Grace Cathedral, an Episcopalian place of worship.