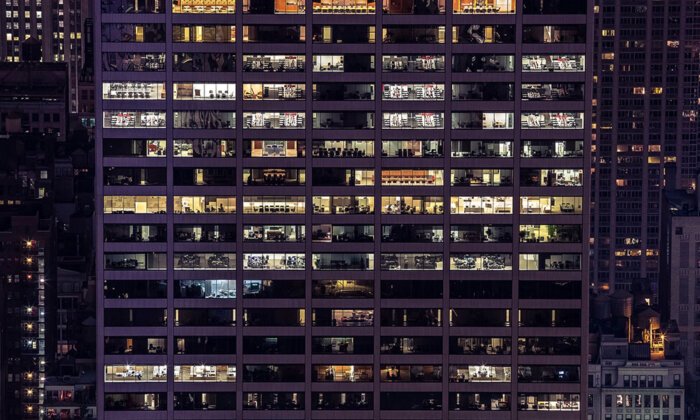 Thanks to the ubiquity of electric light, less and less of the planet falls genuinely into darkness any more. Photo by Vladimir Kudinov, via Unsplash

In 1800, only two percent of the human population lived in cities. A century later, that portion grew to 15 percent. Then, sometime in 2007, a person was born in a city somewhere on the globe who tipped the proportion of Homo sapiens that lives in cities over the 50 percent mark. Despite the fact that cities cover only two to three percent of terrestrial surface area, more than half of humanity is now urban-dwelling. There is no going back. 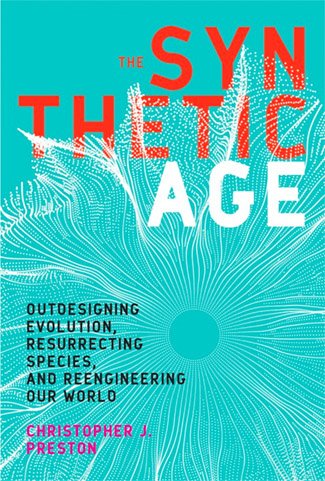 This article is adapted from Christopher Preston’s book “The Synthetic Age.”

For a species that spent close to 200,000 years living in grasslands and scrubby forests, hunting and foraging, and using skins, wood, and grasses for shelter, we are increasingly occupying an evolutionarily unfamiliar niche, where the sensory and physical dimensions of a life lived in daily contact with the natural world have been replaced by a whole set of alternate experiences: Cement and traffic, 90-degree corners, bars, sirens, glass, and streetlights increasingly dominate our senses. As far as our genes are concerned, we live in an alien world. Phobias about snakes slithering out of toilet bowls, coyotes snatching children out of strollers, and diseases infiltrating city water supplies reveal the location of our biological roots. The shadow of the wild continues to haunt the psyche of even the most entrenched urbanite.

Alongside us, fast-breeding and opportunistic species are changing their behaviors and their genomes so that they will fit better in the urban world. City-dwelling swallows are evolving shorter wings that allow them to avoid the traffic better, and sparrows and starlings have raised the pitch of their calls to compensate for the background urban noise. Moths are gaining different color patterns so that they have more suitable camouflage in their new concrete habitat. Evolutionary forces are turning city-bound mice into separate subspecies in different city parks, unable to exchange genes with cousins who live a few blocks away.

A second and related agent of evolutionary change is the progressive banishment of darkness from the world at the hands of electric light. Paul Bogard has written poignantly of his deep regret at the “end of night.” He points out that the spread of electricity across many parts of the globe has condemned real darkness to the planet’s history. This lack of night comes with sizable biological consequences. Excessive illumination is disrupting the natural rhythms created by millions of years of the earth’s steady axial rotation.

The first photos of the earth from space taken by lunar-bound astronauts revealed a spectacular blue marble poised in front of a star-speckled expanse. The individuals lucky enough to see the planet from this vantage point were all transformed. American astronaut Edgar Mitchell memorably described his impression of it as “a small pearl in a thick sea of black mystery.” The planet’s finitude, its swirling beauty, and its apparent fragility gave our species its first clear sense of our lack of astral significance. Norman Cousins later remarked that “what was most significant about the lunar voyage was not that man set foot on the Moon but that they set eye on the Earth.”

More recent photographs of the earth taken at night have revealed a pearl that is increasingly crossed by spider webs of yellow light projected from cities and the transportation corridors between them. The world is now comprehensively illuminated. Thanks to the ubiquity of electric light, less and less of the planet falls genuinely into darkness any more. Power shunted through incandescent filaments, the gases of fluorescent lights, and a billion light-emitting diodes means that darkness is being pushed off the landscape by this electric interloper. Synthetic light races through the air for miles beyond its intended destination, leading to a diffusion rate that far exceeds that attainable by the bulldozers and diggers that make its spread possible.

Prior to Thomas Edison’s design of the first commercially viable light bulb, nighttime illumination came only from flames fueled by imperfect sources, such as wood, whale oil, paraffin, and natural gas. The light from these sources danced unpredictably and was always mottled by the smoke of imperfect combustion. The spread of the light was limited by available fuel, environmental conditions, and a basic lack of penetration. Many still feel attached to the light provided by a cavorting flame, seeking it out from wood and wax when wishing to disappear into memories or create venues for intimacy.

When the limited light cast by these flames was overtaken by that of incandescent bulbs, the nighttime started to change its color from a deep inky black to various shades of orange, yellow, and white. The carefree spreading of megawatts of unused light into the night sky has led to a pale dome of illumination above every population center. This glow refuses to leave the city’s vault even when most of its residents are asleep. Bogard quotes an Iroquois writer who told him “we have the night so the Earth can rest.” As electrification has spread across the world, the amount of rest available to the earth has diminished. This loss to the planet also appears increasingly to be a loss of our own.

Human bodies have natural circadian rhythms. These rhythms are adjustments to the waxing and waning of light during the earth’s daily rotations. Evolution lodged such patterns deeply inside of us. The circadian rhythm has an influence on hormone production, body temperature regulation, blood pressure, and other key functions. Plants, animals, cyanobacteria, and fungi all have similar rhythms that are their own evolutionary adaptations to the rising and setting of the sun. Leaves turn to face the sun and drop in the fall, petals open and close daily, animals rest, and bacteria fix nitrogen at rates that are direct responses to periodic and predictable changes in light. When patterns of light and darkness change, organisms must rapidly adapt or pay the price.

Consider that more than a fifth of all mammal species are bats. In addition to these well-known lovers of a dark world, 60 percent of invertebrates and 30 percent of vertebrates are nocturnal. This means that a large number of the living forms that share the planet with us have evolved so that darkness is an essential factor in their well-being. Of those species that are not fully nocturnal, a large number are crepuscular, a word that has exactly the right sound to describe the creeping and partially hidden character of activity that takes place at twilight.

The swapping out of darkness for light across much of the planet affects all of these species. Sea turtles emerging from the surf and no longer able to navigate by the moon due to beachfront floodlights are perhaps the best-known victims of artificial illumination. But in addition to the turtles, countless other species are shifting their behavioral patterns to accommodate a planet that is increasingly lit up. 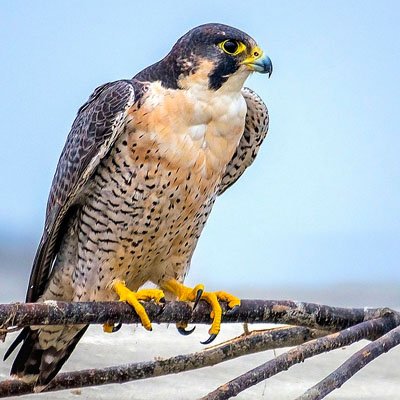 Like Homo sapiens adapting to the city, peregrines are figuring out ways to live, feed, and rest in a world that no longer resembles the one their genes prepared them to find. Source: Wikimedia Commons

Peregrine falcons, for example, are adapting to the new frontier of urban living by figuring out how to hunt pigeons, ducks, and bats in the city at night. The nocturnal hunt no longer involves the 200-mile-per-hour “stoop” from above that has made peregrines famous as the fastest birds on earth. Illumination provided by the glowing city means that the nighttime ambushes involve a new type of stalk. Peregrines fly upward toward the illuminated bellies of their unsuspecting prey, rotating at the last second to pierce the hapless victim’s feathered breast with their deadly talons. Like Homo sapiens adapting to the city, peregrines are figuring out ways to live, feed, and rest in a world that no longer resembles the one their genes prepared them to find.

Meanwhile, in developed countries, up to 20 percent of the workforce is employed in service industries that require employees to be awake for large portions of the night. Night-shift workers such as janitors, health care attendants, and those who labor in 24-hour manufacturing facilities are some of the people who bear this burden. Those who work the graveyard shift seldom replace the number of hours of sleep they missed at night with the same number of hours of sleep during the day.

In a striking indication that the end of night has consequences, the World Health Organization’s International Agency for Research on Cancer concluded in 2007 that “shift-work that involves circadian disruption is probably carcinogenic to humans.” It is thought that this may have something to do with disruption to the production of the hormone melatonin, but at the moment, this is little more than a guess. It should come as no surprise that the human body has a deep biological connection to the earth’s diurnal rhythm.

One of a growing number of local and national organizations concerned about the loss of darkness in America is the National Park Service. This agency has created a “night sky team” to raise awareness of the importance of darkness as a new type of resource, pointing out with impeccable logic and federally approved rhythm that “half the park happens after dark.” In 2006, the Park Service committed itself to preserve the natural lightscapes of parks, which it described in ethical language as “resources and values that exist in the absence of human-caused light.” Artificial light is now deemed an “intrusion” into the park ecosystem, suggesting that the distinction between what is artificial and what is natural is not yet completely moot.

Astronomers too are obviously miffed. Light pollution from cities is making optimal conditions for star gazing harder and harder to find. This is not only the concern of a few professionals with big budgets. Astronomy may be one of the most widely enjoyed arts on the face of the planet, ranging in its practitioners from Ph.D. scientists with multi-million-dollar telescopes to five-year-old children trying not to topple to the ground while craning their necks upward to wonder at the night sky. Seeing the moon and the stars above is one of the most orienting of human experiences, yet it was recently determined that more than a third of the world’s population can no longer see the Milky Way due to the presence of light pollution.

There may be no reason to lament the urban path we have taken given its many positive contributions to our humanity. But there is no doubt it is a path causing an unstoppable shift in who we, as well as the species that like to live alongside us, essentially are. After all, “If we never see the Milky Way,” asks Bogard (quoting science writer and poet William Fox), “how will we know our place in the universe?”

Christopher Preston is professor of philosophy at the University of Montana in Missoula, and the author of, among other books, The Synthetic Age, from which this article is adapted.