Photos courtesy of the State Archives of North Carolina.

Two crosses burned in Robeson County, North Carolina, on January 13, 1958. One was outside the home of a Native American woman who was dating a white man, the other outside the home of a Native family who had moved into one of Lumberton’s all-white neighborhoods. The blazing signs were clearly the work of Klansmen — not that the Ku Klux Klan’s presence in the county had ever been subtle. Caravans of Klansmen had been driving around the segregated county (where the local population included blacks, whites and Native Americans) every Saturday night, terrorizing the Lumbee Indians.

“They wanted you to see them. They wanted you to be afraid of them,” Lillie McKoy, who grew up watching the KKK drive by and later became the mayor of Maxton, a small town in Robeson County, told The Fayetteville Observer in 2008.

The county had been split in three since the 1880s, after the Lumbees resisted North Carolina’s post–Civil War efforts to segregate its citizens into two racial categories. The county had three sets of buses, three separate water fountains and three school systems.

But in the 1950s, things were starting to change in Robeson County, and the Klan wasn’t happy about it. Brown v. Board of Education had recently outlawed school segregation throughout the United States. More locally, the Lumbee Tribe had been formally recognized by the state of North Carolina, and Solicitor Malcolm B. Seawell, a local law officer who would later become North Carolina’s attorney general, had given a speech addressing 15 arrested Klansmen, warning them that Robeson County “would not tolerate” the Klan.

“Your society is neither invisible nor invincible,” Seawell said in his speech to the Klansmen. “You may discover that the easy way or the hard way. Take your choice.”

The KKK chose the hard way.

The latest cross burnings were a precursor to what KKK Grand Dragon James W. “Catfish” Cole hoped would be the Klan’s shining moment, its chance to “put the Indians in their place, to end race mixing.”

A day after the crosses burned, the KKK put up fliers advertising a rally and cross burning at a cornfield near Maxton that Cole had rented from a local farmer.

“There’s about 30,000 half-breeds up in Robeson County and we are going to have some cross burnings and scare them up,” Cole told the Greensboro Daily News.

Thinly veiled tensions created rumors — people said ammunition sales had skyrocketed, leaving stores with scarce supplies. The KKK drove around town, broadcasting racial slurs and promoting their “anti-Indian” rally “in the heart of that mongrelized Indian country.” Lumbee member Clyde Chavis said that the Klansmen’s loudspeaker announcements “blew the lid off all of it.” Suddenly, everyone was involved.

“It was tense, very tense all day,” Chavis recalled in an interview with The Fayetteville Observer. “People knew something was going to happen.’’

The first Klansmen arrived on the frigid field at 7 p.m., an hour and a half before the rally was scheduled to start. All were armed, and one wore white robes, although most donned winter jackets — the temperature would be in the 20s that night. The Klansmen also brought a cross, a large banner emblazoned with three red K’s, and a single light bulb on a pole. A flatbed truck became their makeshift podium. They set up a public address system and tested it, playing a tape of “Kneel at the Cross” for the cheering Klansmen. Cole waited for what he anticipated would be about 500 Klan members to arrive, but they never did. Only about 50 actually turned out.

Meanwhile, a group of Lumbees waited in their cars nearby. The Klansmen’s broadcasts and flyers had done their job, perhaps too well. By 8:15 p.m., 300 to 400 Lumbees and other local tribe members had arrived and made their way toward the Klansmen, vastly outnumbering them.

In addition to the local residents, there were also Lumbees who had made the journey home just to confront the KKK. Simeon Oxendine, a World War II veteran, had left a Veterans of Foreign Wars convention to be there. Wake Forest University senior Sonny Boy Revels had traveled 139 miles home with a group of friends to protest the rally.

Highway patrol officers waited out of sight a mile away. On the field, the Lumbee Indians taunted the Klansmen, chanting, “Goddamn the KKK.”

“I can’t control the crowd with the few men I’ve got,” McLeod told the Klan leader, according to an article in Southern Cultures. “I’m not telling you not to hold a meeting, but you see how it is.”

Disregarding the sheriff’s warning, Cole and the Klansmen continued. Sanford Locklear, one of the organizers of the Lumbee group, began arguing with Cole just before the rally was scheduled to begin at 8:30 p.m. Their words became shoves.

The Lumbees stood off to the side, many of them armed. Some began moving closer to the Klan’s makeshift stage.

Lumbee member Neill Lowery shattered the light bulb with a gunshot, extinguishing the field’s only light source. As the field plunged into darkness, the scene turned to chaos. An Associated Press photographer who was on the scene later told the Rocky Mount Telegram that “several thousand rounds” of ammunition were fired.

Catfish Cole ran into the nearby swamps, followed by other Klansmen who hurriedly drove or ran away from the field.

“They was scared, and they were surrounded,” Locklear said. “They just, you know, they just gave up.” 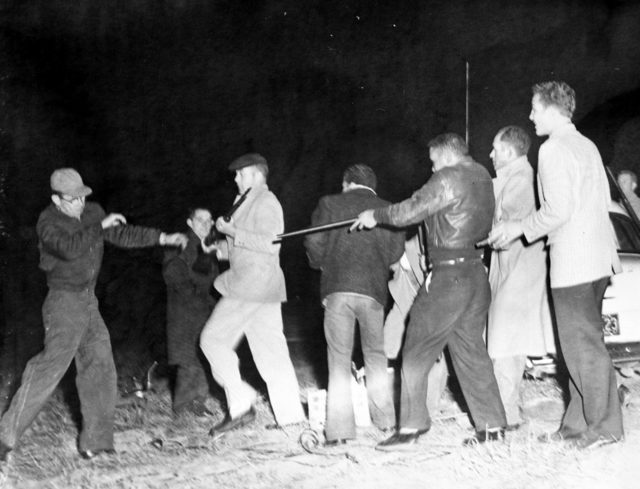 Lumbees fighting klansmen at the KKK rally that became knowns as The Battle of Hayes Pond.

In Cole’s haste to flee, he left his wife behind, in their car. His panicked wife drove into a ditch while leaving the field — Lumbee Indians helped to free the car. Sheriff McLeod, along with State Highway Patrol Captain Raymond Williams and both of their officers, stepped onto the field. Tear gas from Robeson deputies clouded the air.

The field was quiet and empty by 9 p.m. The tear gas was gone, and the Klansmen were either driving away from the field or dashing through the swamps. Two carloads of weapons were confiscated, and although shots had been fired, none of them were fatal. The Lumbees had intentionally fired into the air — scaring, not harming, the KKK had been their goal.

The victorious Lumbees celebrated, collecting the battle’s spoils and firing their shotguns into the air. The Klan’s belongings and an effigy of Catfish Cole went up in flames. Oxendine and fellow veteran Charlie Warriax brought the KKK banner back to the Veterans of Foreign Wars convention in Charlotte.xf

“This Ku Klux banner is mine,” Oxendine told a reporter at The Charlotte Observer. “And I’m going to walk into the lobby of the Charlotte Hotel wearing it like a scarf.”

The resulting photo and the battle’s story were picked up by news outlets nationwide in publications like Life magazine, the Los Angeles Times and The New York Times. These media outlets praised the Lumbees’ victory — although even that praise was often peppered with descriptions of “war whoops” and “redskins” that perpetuated racist stereotypes about Native Americans.

Historian Malinda Maynor Lowery, a cousin of Simeon Oxendine, said that “the Lumbees’ action revealed that the opposition to racial terror was just as committed as the terrorists themselves were.”

With the flag wrapped around them, Oxendine and Warriax looked like superheroes. And the Lumbees were heroes, having driven the country’s most infamous hate group out of their county. Some Lumbees, however, humbly maintain that their resistance was just a matter of necessity.

“We had to do what we had to do,” Lee Ancil Maynor said at a 2016 event commemorating the battle. “If we hadn’t done it, they would have soon been in our front yard.”

After reportedly fleeing into the swamps and hiding for two days before making it home to South Carolina, Catfish Cole was arrested, posted bond, and said he’d fight extradition to North Carolina, while quickly announcing plans for a new rally on January 27.

“It will be the greatest rally the Klan has had,” Cole said, according to Southern Cultures. “I expect there will be more than 5,000 Klansmen there and probably more. Klansmen all over the South are pretty upset.”

A week later, Sheriff McLeod said he would seek an arrest warrant for Cole and other Klansmen. On January 21, a grand jury in Robeson County charged Cole and his “sergeant-in-arms” James Martin with inciting a riot. Martin, who was the only one arrested at the battle itself, received a $60 fine and a 60-day sentence for public intoxication and carrying a concealed weapon.

“You came with a gun. Obviously you did not bring goodwill. Our people can’t understand why you would want to come among a happy people and … create discord,” Judge Lacy Maynor said at the hearing. “If your organization had something worthwhile to offer, we would be happy to have you. But the history of your organization proves that it has nothing to offer.”

Luther Britt Sr., a Lumberton attorney who had been involved in multiple KKK trials, addressed Cole during a later trial in March, saying that the Klan leader had “got another thing a-coming” if he thought he could “drive” the Indians out. He added that the jury’s verdict was the “one way” to stop the violence. 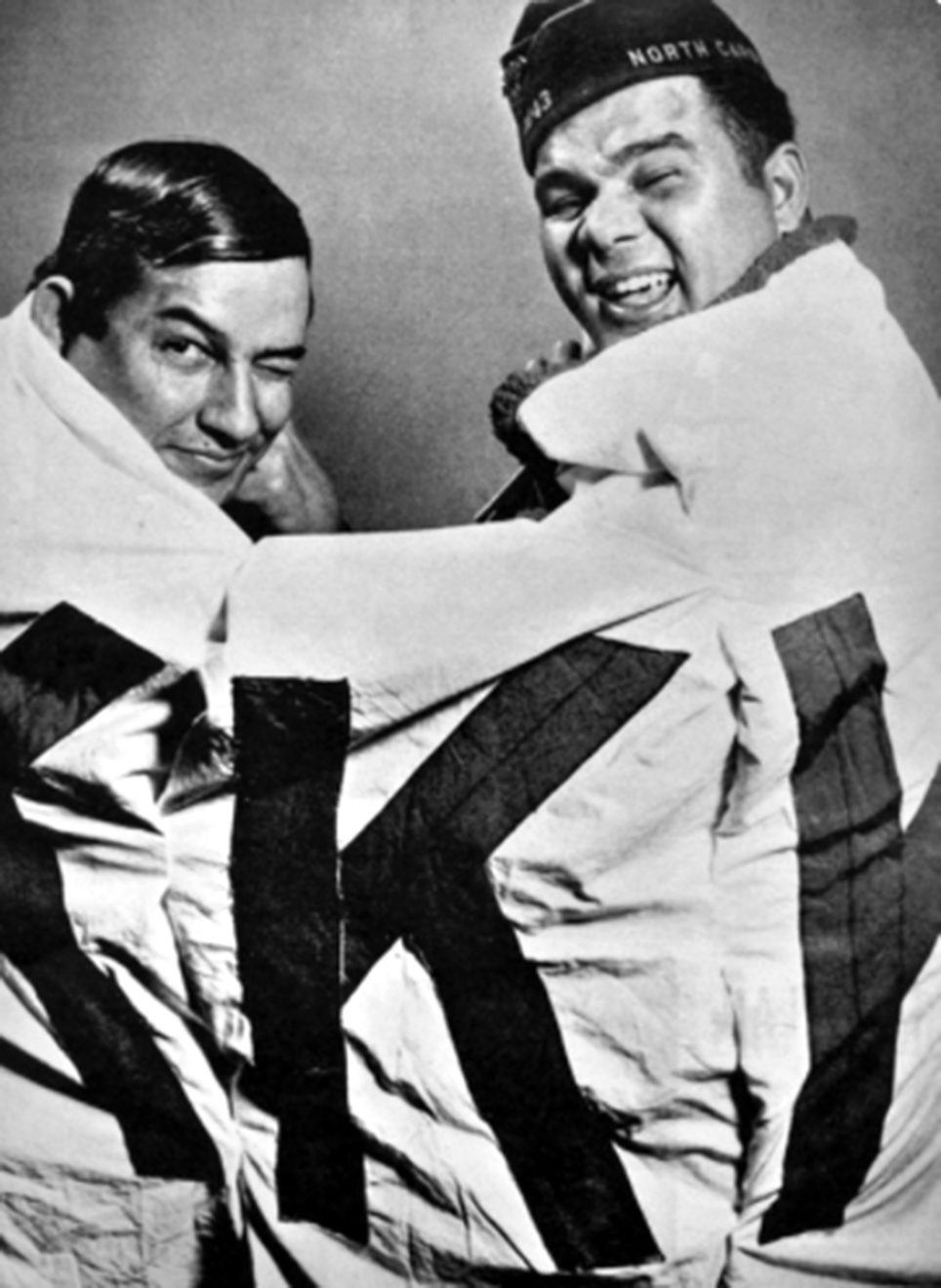 A mixed race jury found Cole and Martin guilty of inciting a riot, and Cole was sentenced to 18 to 20 months in prison.

The Klansmen would never return to the county. Instead, the KKK’s rally that never was became a beacon of Native American solidarity.

“It motivated a whole generation of young Lumbee Indians to assert their rights and be proud of who they are,” Lumbee scholar and author Dean Chavers said.

“I knew white people could not push a Lumbee Indian around, which Catfish learned the hard way,” Chavers said. “White people in Robeson County knew this, and still do.”

Sonny Boy Revel’s son, Bill, remembers learning about the clash, known as the Battle of Hayes Pond, as a young teenager. He says that the Lumbee community has always been “very tight.”

“When it comes to outside force, they have always had to get together,” Bill Revels said. “They’ve always had to be together, because if they weren’t then they were just going to be fractured and that would be that.”

He said his father was scared at the time, but he felt that standing up in opposition of the rally was “something he needed to do.”

“Battle of Hayes Pond: The Lumbee and other American Indians ousted the Ku Klux Klan from Maxton, Jan. 18, 1958, at rally 1/2 mile west.”

The Lumbees are still fighting today, protecting their land and tribe from the construction of an oil and gas pipeline and improper usage of their symbols. But according to historian Malinda Maynor Lowery, the discussion of “right and wrong in today’s society” has shifted.

“People are anxious to defend racist, hostile actions in the interest of hearing from ‘both sides,’” Lowery said. “In 1958, people understood that the Klan didn’t have a side worth defending.”

Thanks to Narratively reader Joe DeFilippo for tipping us off to this amazing Hidden History story. Joe wrote and performed this song about the Battle of Hayes Pond with the RJ Phillips Band, based on the work of Prof. Dean Chavers.

Ilena Peng is an undergraduate student at the George Washington University.