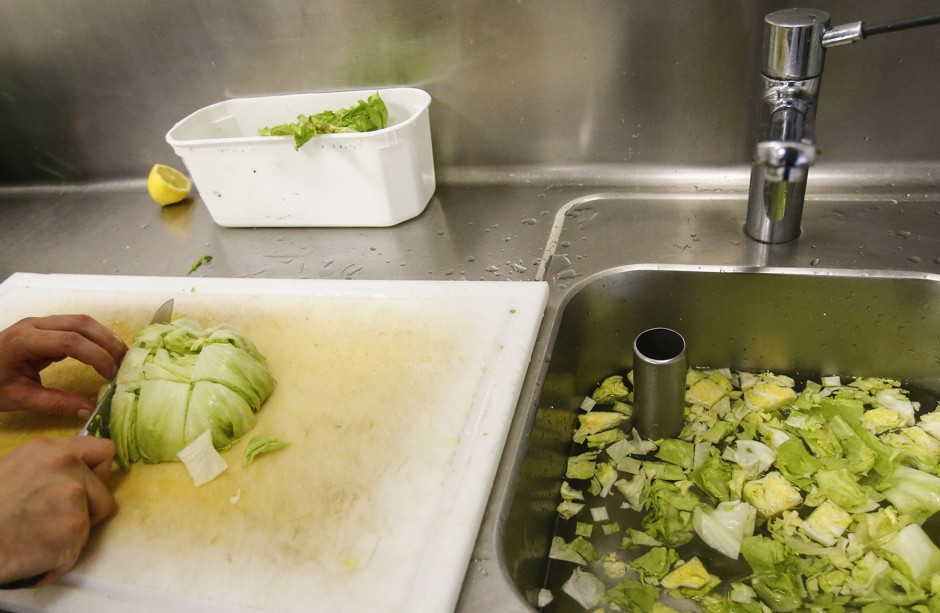 In the 1970s, officials in New York City banned in-sink kitchen garbage disposals over concerns about aging sewer systems and discharge of raw organic refuse into nearby rivers. Paper-waste recycling programs dominated conservation efforts at the time, and a green-waste management solution seemed less urgent without the looming specter of climate change. Plus, disposers weren’t an easy sell: the pulverizing devices were noisy and costly to install, their blades the stuff of kitchen-sink horror. (In fact, garbage disposers don’t use blades at all: spinning “lugs” or impellers use centrifugal force to continuously force food particles into a grind ring, which then liquefies the waste and flushes it into the sewer system.)

According to a 1997 Department of Environmental Protection (DEP) report, only about 25 percent of NYC households had a disposer in 1971. Organic waste was “the next big frontier” for the city, explains former First Deputy Mayor of New York City Norman Steisel, who played a key role in the legalization of garbage disposers during the Dinkins administration (1990-1993), and who served as Sanitation Commissioner for many years. Though Steisel recognized that the city was dependent on landfills and emitting sizable greenhouse gases, the city was still sorting out the details of its recycling program.

Steisel encouraged the Department of Sanitation and the DEP to work together, promoting life-cycle studies that showed both the financial and ecological potential of disposers—research that would shape legislation ultimately passed during the Giuliani administration. The city installed more than 200 of the devices in select city apartments for a 21-month trial run; they then compared apartment units that had disposers with disposer-less units in the same building. Careful analyses from this study and others formed the basis of DEP’s report: the projected impact of citywide disposal legalization was minimal, and the Department estimated a $4 million savings in solid waste export costs.

City officials lifted the ban on garbage disposers in 1997. Twenty years later, though, their adoption is slower here than almost anywhere else in the country. Why are New Yorkers so reluctant to install garbage disposers—and what’s at stake if we continue to dispose all of our trash curbside?

Waste disposal is a thorny problem even in small towns, but for New York City, the trash pile continues to mount: The Department of Sanitation handles nearly 10,000 tons per day of waste generated by residents and nonprofit corporations, and the cost of disposal in Manhattan has grown from $300 million in 2005 to about $400 million today. Commercial establishments are serviced by private carting firms who also collect about 10,000 tons per day. All of that trash must be transported to landfills—often hundreds of miles outside the city—where it is converted into methane gas. But landfills capture only half the total methane that they generate; the rest is lost through “fugitive emissions”—released vapor that contributes to air pollution and climate change. By contrast, waste from garbage disposers is 70 percent to 90 percent water; it can be cleaned and put back into the water system via specialized treatment facilities, some of which are outfitted with technology that capture methane gas generated by decomposition of organic matter, thus turning biogas into fuel.

Down and Dirty With Disposal Science

To create that fuel, waste water must travel through an anaerobic digester. This apparatus “relies on microbes to consume effluent waste and produce methane biogas, which can be turned into heat and electricity,” explains Michael Keleman, manager of Environmental Engineering at InSinkErator, the leading manufacturer of garbage disposers. Disposers facilitate that process much more efficiently than trash collection, Keleman says—waste water gets there within three hours.

The catch: Waste-water plants must be specialized to handle the sludge and transform it into a sustainable bio-product. New York City has 14 such treatment facilities, each of which features an anaerobic digester, says Keleman—meaning that the wholesale adoption of garbage disposers in all five boroughs could, in theory, significantly reduce waste, cut costs, and offer the city a highly efficient, alternative renewable energy source.

So why does garbage disposal skepticism persist? Urban planners are full of doomsday predictions about sewage spill-over, but many experts disagree: Even if every single one of the 3 million residences in New York City installed a disposer—an unlikely prospect to begin with—that would mean 3 million gallons of clear slurry water added to a sewer system capable of handling a daily average of 1.2 billion gallons. “To suggest that garbage disposals would contribute to sewage overflow is the proverbial drop in the bucket,” says Steisel, who is a chemical engineer by training. “You won’t suddenly see a cabbage floating down the street.”

Maybe not, but landlords may still be reluctant to install the fixtures because of first-time installation costs (which can exceed $600), concerns about maintenance, or because they simply aren’t aware disposers are permitted to begin with. Perhaps the greatest block to in-sink disposal adoption, however, are our own misconceptions about them. “Disposers are much more advanced than they used to be” says Carol Baricovich, director of marketing communications at InSinkErator. She and Keleman have worked to dispel other common concerns. Water and electricity use are minimal (according to InSinkerator, disposers account for less than 1 percent of a household’s daily water usage, and the total energy cost is about $0.50 per year); the devices don’t require much maintenance and often last a decade or more; clogged pipes are rare because scraps are entirely pulverized; almost everything can go down the disposer (veggies, fruit, meat, pizza), and newer models are nearly silent (and not deadly).

The DEP, however, cautions that further study of disposers is necessary. Deputy Commissioner at the Bureau of Wastewater Treatment Pam Elardo explains, “High rates of penetration for garbage grinders could have negative environmental consequences, especially given the increasingly demanding regulatory context for nitrogen discharges and combined sewer overflows.”

Such concerns—algae blooms that feed on waste-water nitrogen adversely affect marine life—are legitimate, but may not be supported by the science. Advocates of the disposer maintain that food waste has a far lower nitrogen component than sewage. And, although widespread installation of disposers might transfer some costs to water resource agencies (since pipes, not trucks, would need to ferry out organic waste) or temporarily inconvenience landlords, comparative-cost studies strongly suggest that the devices are less expensive and far more sustainable than truck-based collection, notes Kendall Christiansen, an environmental affairs consultant who helped launch food disposers in New York City after their citywide legalization. “In my single-family home,” says Christiansen, “my choice is three feet to my disposer or 50 feet to take my organics bin to the curb.”

The garbage disposer should be seen not as the only solution to unchecked waste, but part of a suite of green household initiatives—one component of an urban tool kit that helps cities tackle the problem of waste management, carbon emissions, even food security. Waste is inevitable, but when it comes to conservation, the humble garbage disposer punches above its weight.

Adrienne Bernhard is a writer based in New York.